I’ve seen a lot of different products from being released by Wotofo over the last couple of years, pods, pod mods, rebuildable stock-coils, the Profile line of mesh atomizers, while they still continue to produce traditional rebuildable atomizers. What I haven’t seen much of recently are mods.

So just to change things up a little, Wotofo have just released three mods, the MDura, the MDura Mini and the MDura Pro, and the release of a fourth, the Profile Squonk Mod is imminent.

The MDura range are all available as starter kits however this review will be for the 230w MDura Pro mod only. The MDura Pro in kit form comes with the nexMESH Protank that I reviewed a while back, finding it to be a pretty solid tank with decent coils and an optional RBA.

I’ve been fortunate enough to have been testing the MDura Pro for over a month, so I’ve had ample opportunity to to put it through plenty of daily use, to see if it stands up to Wotofo’s claims of being durable and rugged. 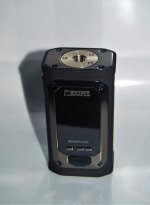 When I first saw pictures of the MDura range, what stood out (in a bad way) were the really vivid colors of the leather grips, so when I unboxed the MDura I was pleasantly surprised to see a far darker shade of blue than I shown on the promotional images.

If Casio decided to make a G-Shock vape mod, it would look like this – or to be more skeptical, it’s like an Aegis – just more rubberized and less of an exoskeleton design element.

It’s also chunky and heavy, it’s not a pocket friendly mod, but the upside of this is that it will take up to 30mm atomizers on its centered 510.

Overall, it feels nice – the fire button is well placed and clicky, the materials feel nice to touch, the battery door feels very secure – it feels how it looks, big and sturdy with nice ergonomics. 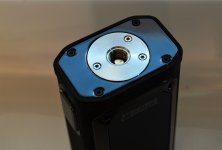 As well as the fire button, there are power up/down buttons and a menu/stealth mode button – menu + up/down accesses the various power modes, fire + down clears the puff count, fire + up changes the screen colors, three clicks locks the fire button, up+down locks the wattage, and five clicks turns on/off the mod.

Modes available are standard, power, power+, temp control and memory – I’m a purely wattage vaper, so I stuck to the standard mode most of the time, power and power+ makes it hit a little harder, but it’s hard to see the point, when you could just stay in standard mode and increase the wattage. 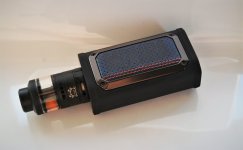 The screen is a great size, with clear fonts and everything you would expect. Battery levels are shown for each battery with bars and percentage, mode, wattage, volts, ohms, puff count and puff time.

I like the screen on the MDura Pro a lot, it suits the design and helps to give it a good quality and modern feel.

There’s not a lot to say, it vapes like it’s supposed to, it doesn’t feel underpowered, and in the month I’ve been using it, it hasn’t missed a beat.

I’m not the type to drop my mods, but the MDura Pro is IP67 rated, so it is waterproof, dustproof and shockproof.

More important to me is that the common weak point of this type of mod – the bottom hinged door feels very solid, the hinge is on the wide edge of the mod and the release button is secure.

Time will tell, but if first impressions are anything to go by, this mod feels as if it will last well. 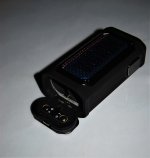 There are a lot of sub $100 dual 18650 mods on the market, however this is probably where my money would go if I was buying one right now.

However that is as much about my personal taste as it is about practical performance, if you like the tough, rubberized style then you’re probably going to like it, if you prefer a more classical, all metal mod, then there are other mods more fitting with your taste.

The MDura Pro was provided by Wotofo for the purposes of this review.

Ever meet shop owners that say the stuff they sell is garbage and yet keeps selling them? | Vaping Underground Forums