Presented in Boxes of 20 and 5-packs

The Vudu Broadleaf Back Story

VUDU Broadleaf is one of four Vudu selections made exclusively for Famous Smoke Shop by one of the industry’s best master blenders, Jesus Fuego. The Fuego family goes back five generations to 1876, having started as a leaf growing company on Cuba’s legendary “El Corojo” farm.

In 1995 Jesus’s family migrated to Central America, and by 1998, Jesus was working from Honduras. At that time, he also worked for several other cigar factories doing leaf sorting and fermentation. Using his agriculturalist education, Jesus was continually experimenting with tobacco. And as a friend of the Plasencia family, he was able to work a few plots on their Honduran farm to cultivate his own Criollo and Corojo leaf hybrids. 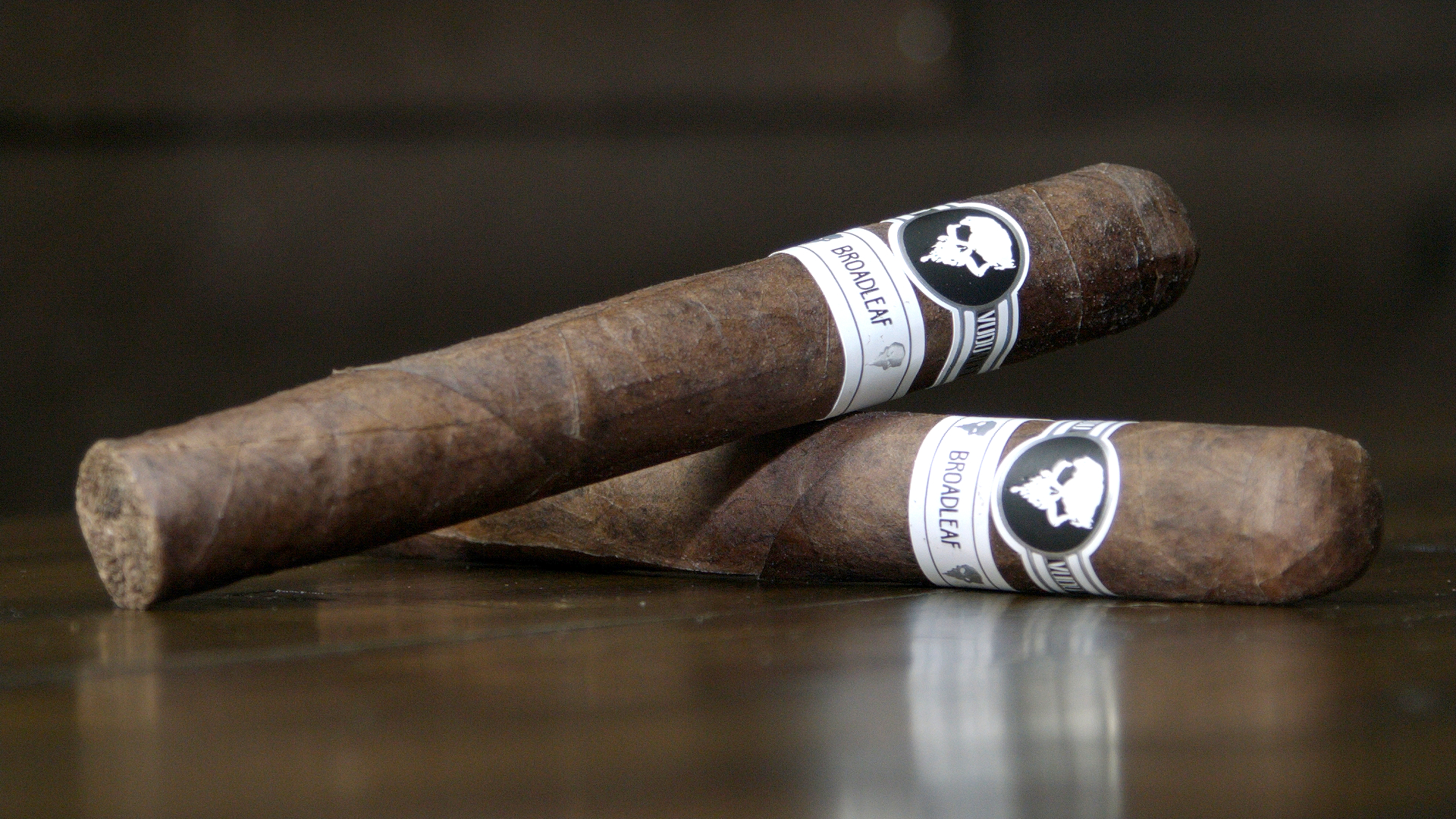 In 2006 he launched his own company, Tabacos S.A. and produced the critically acclaimed J. Fuego Gran Reserva Corojo No.1 selection. From there he went on to produce more high-scoring blends, which include the J. Fuego Americana, Sangre de Toro, and Connoisseur, among others.

In 2016 Famous Smoke Shop tapped Jesus to create the first of their exclusive Vudu selections. Originally presented in humijars, Vudu cigars now come in boxes in four varieties, Habano, Connecticut, San Andres, and Broadleaf, and have become one of Famous’s most popular exclusive brands.

The first several puffs of my Vudu Broadleaf Sixty were earthy and spicy with a black pepper finish that lingered on my tongue a long time. It seems the leathery pre-light note I got had disappeared. As the flavors began to develop, I picked up more earth, a charred oak flavor, and some weak underlying sweetness. The finish was a little shorter, and even some of the black pepper rolled-off a little. 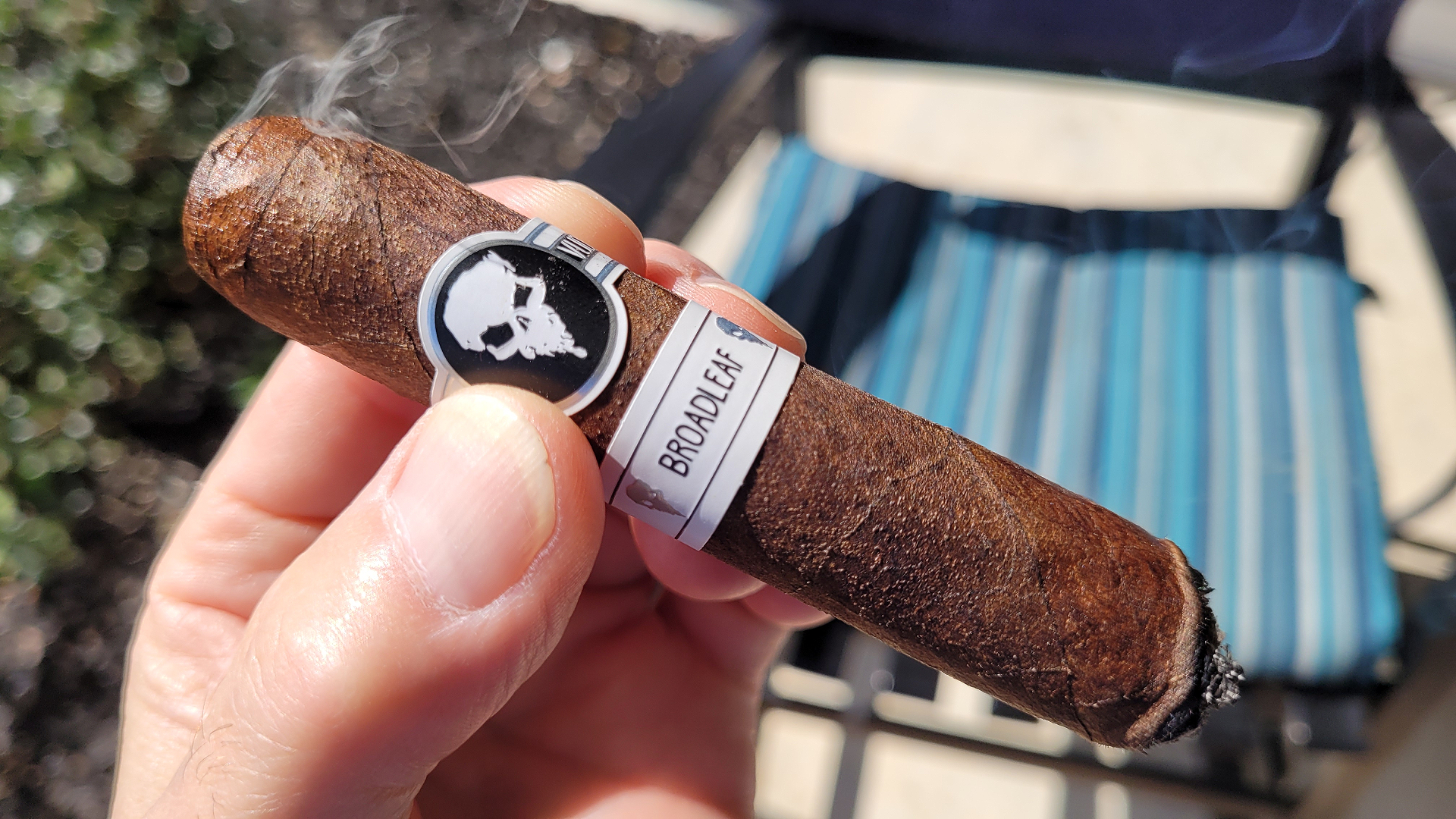 Once past the first inch, the flavors began to settle in. The smoke was very smooth on the palate with a medium body, while a balanced mix of earth, charred oak, spice, and a pinch of sweetness began to gel.

The burn also got off to a good start burning very evenly, while to my nose, the aroma was sweet.

The flavors were mostly unchanged at this point other than having picked up a hint of espresso in the mix. In addition to being smooth, the smoke also had good volume. So, what we’ve got here is a smoke that’s mostly earthy, woody and a tad sweet with a spicy finish. The burn remained even, the aroma was still sweet, and the body remained in the medium zone. 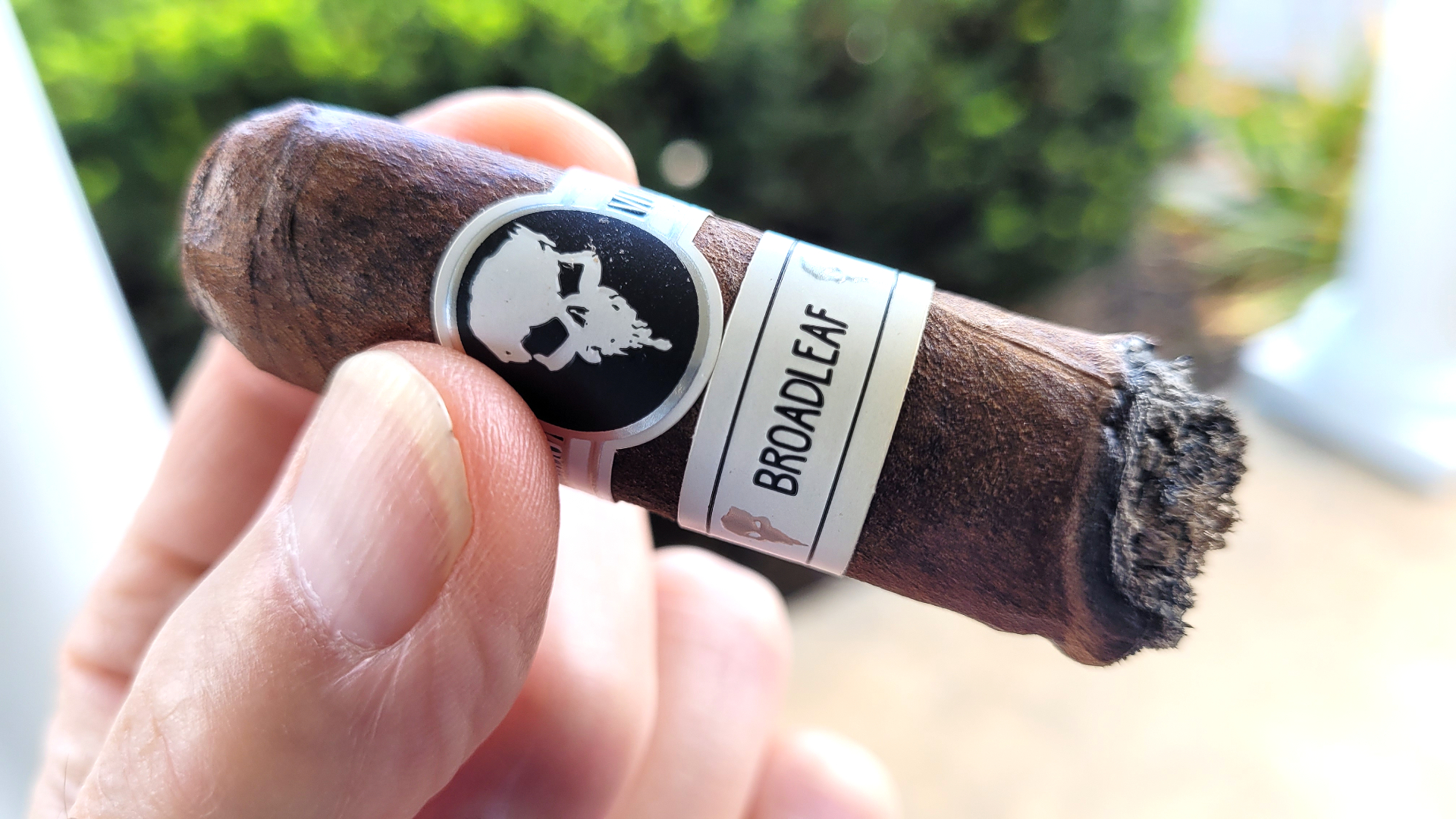 I was also impressed with this Vudu’s Pennsylvania broadleaf wrapper. At a 60 ring, there’s going to be more tobacco at the core. Yet the wrapper flavor cut right through it allowing it to show off its naturally bold and sweet-spicy character. 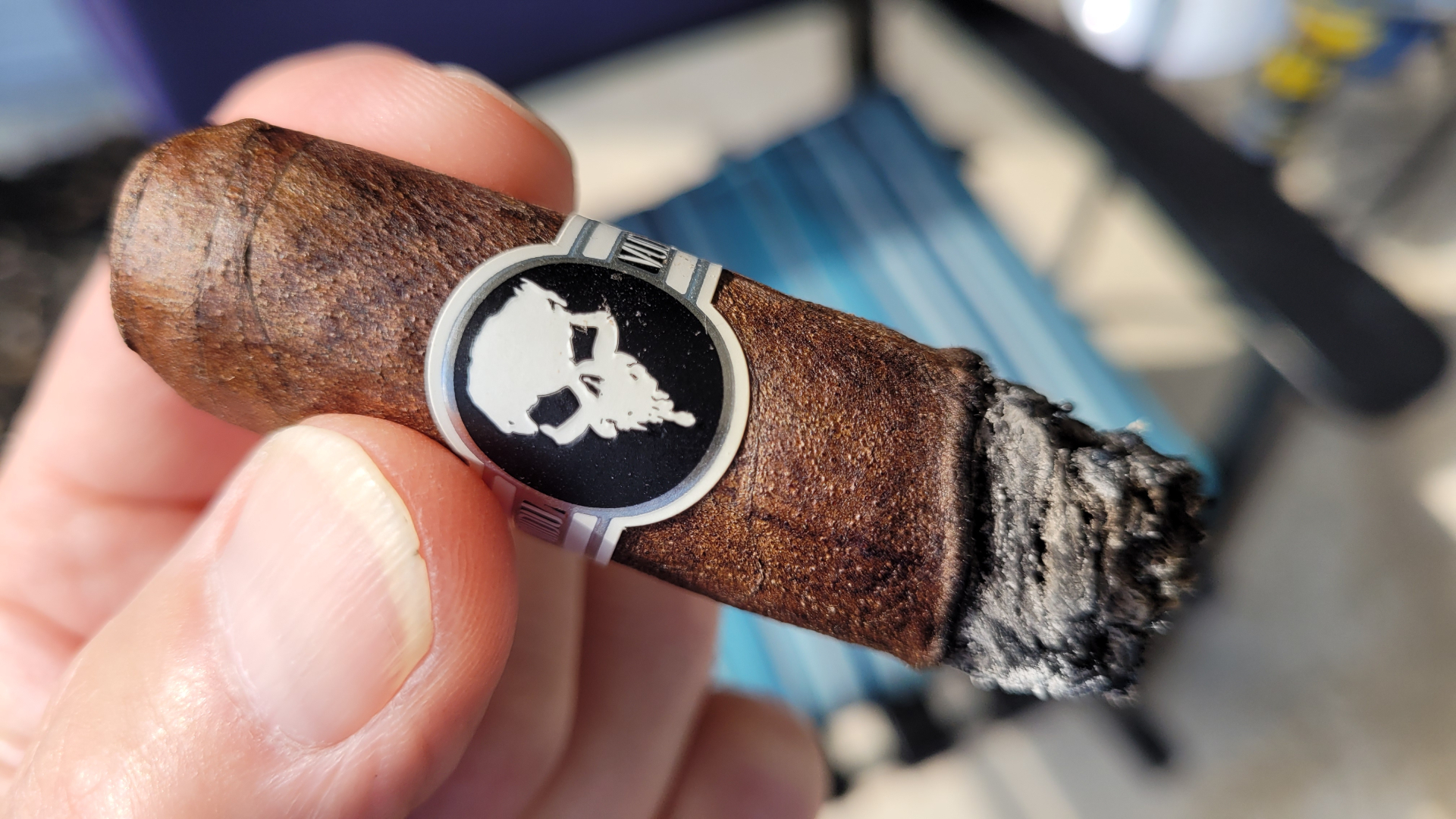 At this point the sweetness was barely hanging on while the body moved into the medium-plus range. The smoke was still earthy, woody, and spicy, but with more espresso coming through. By the time I hit nub territory, the cigar resisted turning sour, and it didn’t get any stronger either. But with about an inch and a half left, it was pretty much done for me. 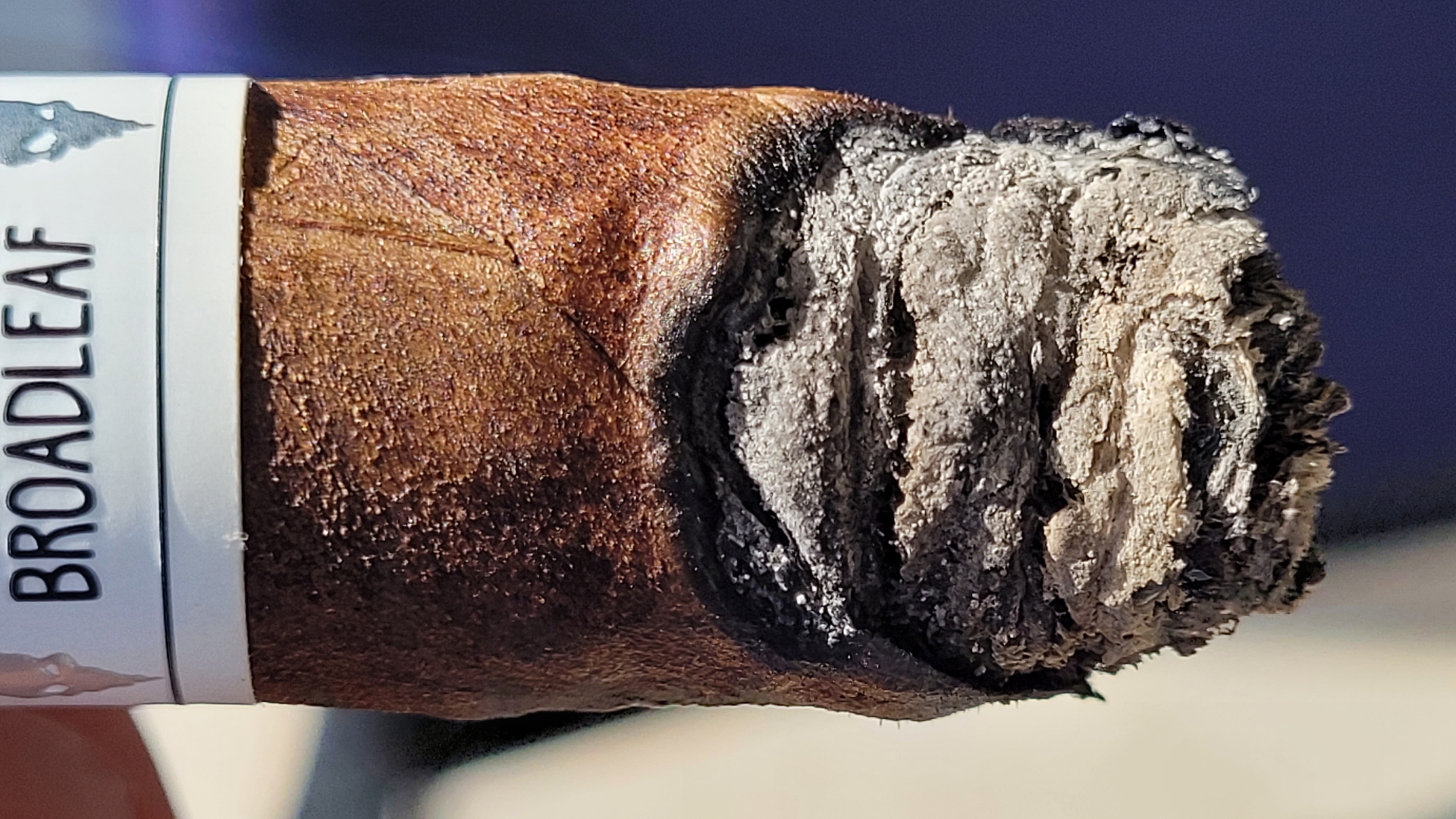 What whiskey pairs well with the Vudu Broadleaf Sixty? 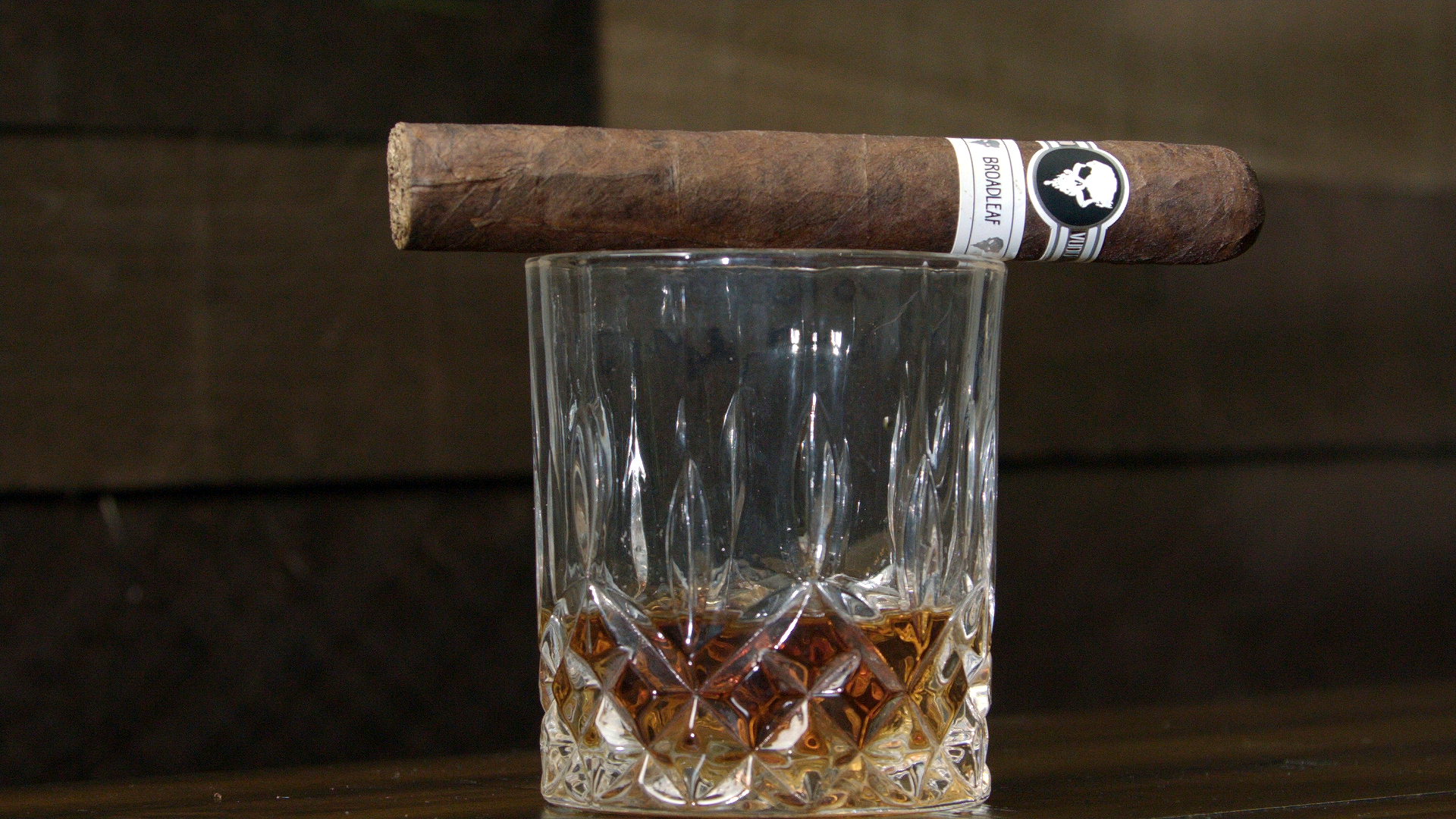 If you’re a bourbon fan, something like Baker’s 7 Year Straight Bourbon Single Barrel will do right by the Vudu Broadleaf Sixty. The caramel, vanilla, spice, and charred oak flavors in this whiskey nicely complement the Vudu’s earthy, woody, and spicy character. On the other hand, try an espresso or a mug of rich black coffee with a little sugar. For more combinations, see our Cigar & Spirit pairing guide.

Is the Vudu Broadleaf Sixty cigar worth smoking?

As I pointed out in the video, I’ve never been a big fan of Pennsylvania Broadleaf wrapper. I remember when a lot of cigar makers began using it, but except for a couple of standouts, I still prefer Connecticut Broadleaf. That said, the broadleaf Jesus uses on this Vudu is well worth tasting if you want to get a really good idea of what this wrapper is all about. 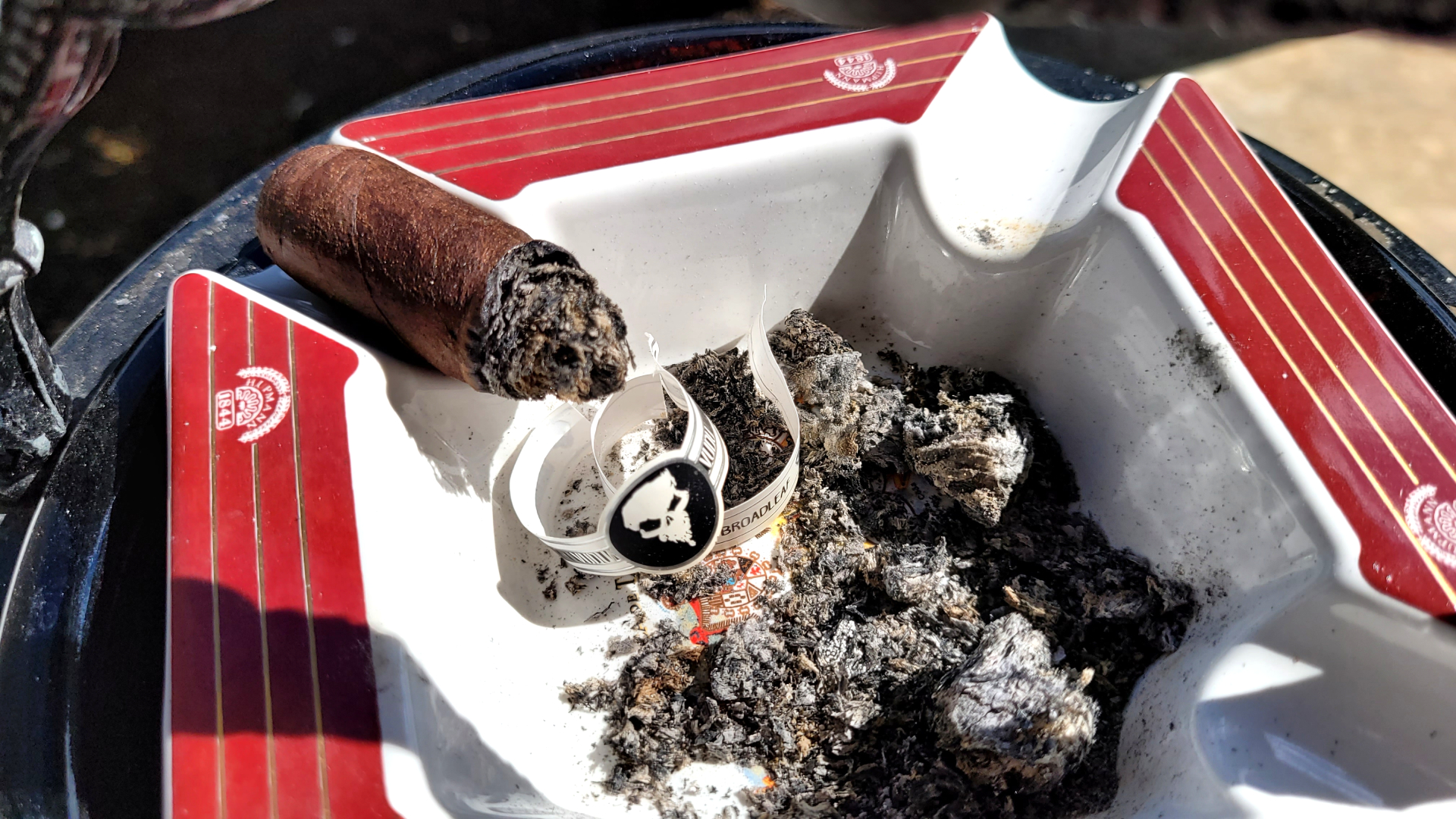 Additionally, its rugged appearance and affordable price make it ideal for outdoor activities like golf, camping, hunting, off-roading, etc. Yet it’s just as enjoyable from the stationary comfort of your easy chair with a good drink. Personally, I wish the Vudu Broadleaf had a little more sweetness, but that’s just me. So, if you like bold, earthy flavor and big ring gauges that are more modest in strength, the Vudu Broadleaf Sixty should do it for you.