It appears that manufacturers have been very busy designing and building new products as the review samples continue to roll in. Today I’m going to attempt to discuss the new Voopoo Doric 60 pod system. I read somewhere that the Doric 60 takes its inspiration from the pillars of the Roman pantheon. What I know for sure is that the Doric 60 has a 2500mah internal battery and has three output levels but no screen and only a single button to operate the unit. Included in the kit is the very familiar and well known PNP pod and coils that have been used on several Voopoo devices. It is nice when manufacturers make items compatible across several devices so the end user doesn’t have to start from scratch buying a new line of coils. Since the Doric 60 uses the PNP pod tank then the PNP MTL tank will work and the TPP and TPP X pod tanks should be compatible also.

The packaging of the Doric 60 is fairly minimalistic. The box opens from one end and the Doric 60 battery and PNP pod sit in a plastic tray that slides out. Underneath the tray is a box containing the USB-C charging cord and two PNP coils along with the user manual and a desiccant packet.

It seems like more and more companies are getting on the tube style mod wagon lately. The Doric 60 is Voopoo’s entry into that category. I think they are good for entry level users with the simplicity of operation due to only one button and no display.

The top of the battery portion contains a metal ring that the pod rests on and two gold plated spring loaded contacts to transfer power to the coil. Rather than have the airflow sensor in the middle like some other auto draw devices, this one has the airflow sensor offset so that it is less likely to get liquid inside if there is condensation or leaking. This may also be why the auto draw function only seems to work well in MTL with the airflow restricted and doesn’t seem to work well with DTL and open air. I’m honestly not surprised since I have had this same experience with other Voopoo products I’ve tested and feel like it is an issue that needs to be corrected. The auto draw on this one works a little bit better than some of their others that I’ve tried but if the airflow is open very much then you have to draw really hard to activate it. 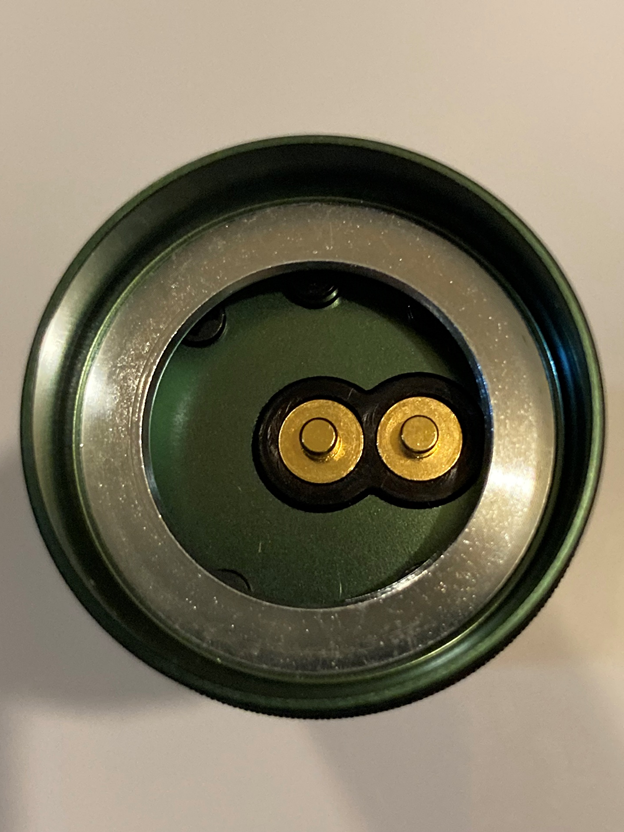 Below the pod opening is the dual slotted airflow control. It turns 360 degrees and does not have a stop. There is also a single hole available on each side for those that choose to use the Doric in MTL mode.

Below the airflow ring, there are three lights to indicate the “gear” that the output is in according to the color of the lights. The fire button is directly under the lights and protrudes a little which is nice since you can pick up the Doric and feel the button placement instead of having to look for it. There are three output modes which are High(White), Medium(Green), and Low(Blue). Near the bottom of the button side is the name DORIC etched into the surface. On the opposite side near the top is the USB-C charging port and the Voopoo name etched near the bottom. On the bottom surface of the battery is a rubberized ring to help it keep from slipping when sitting upright and a single vent hole.

The number of lights lit while the output is activated indicates the battery level as follows. 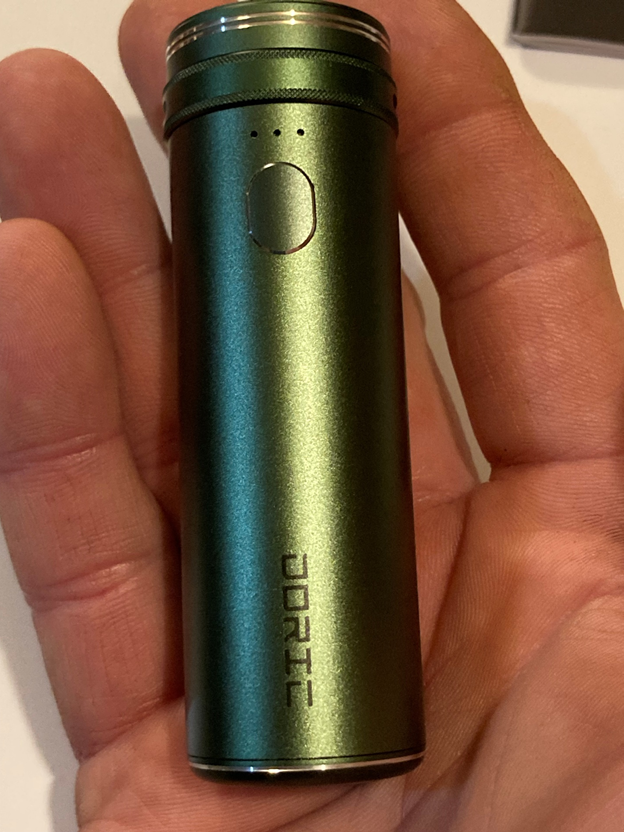 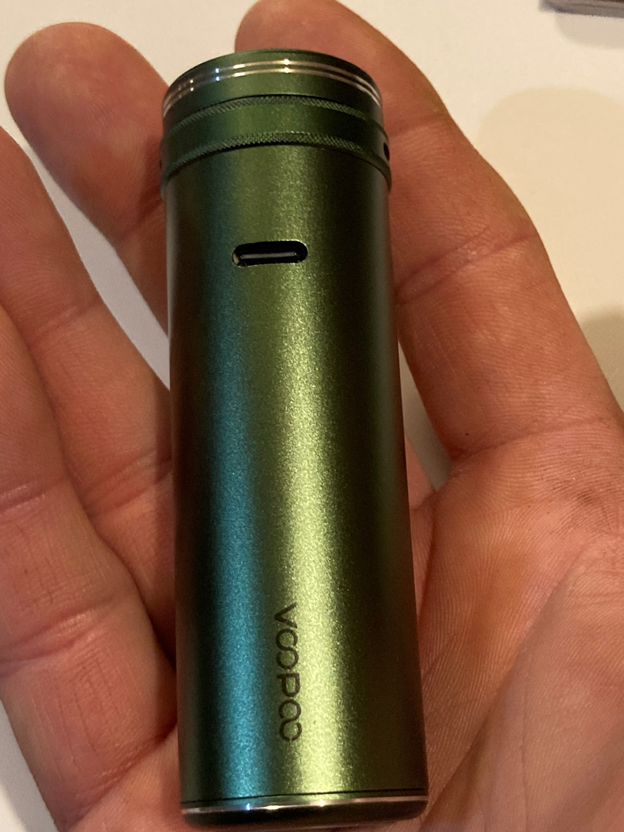 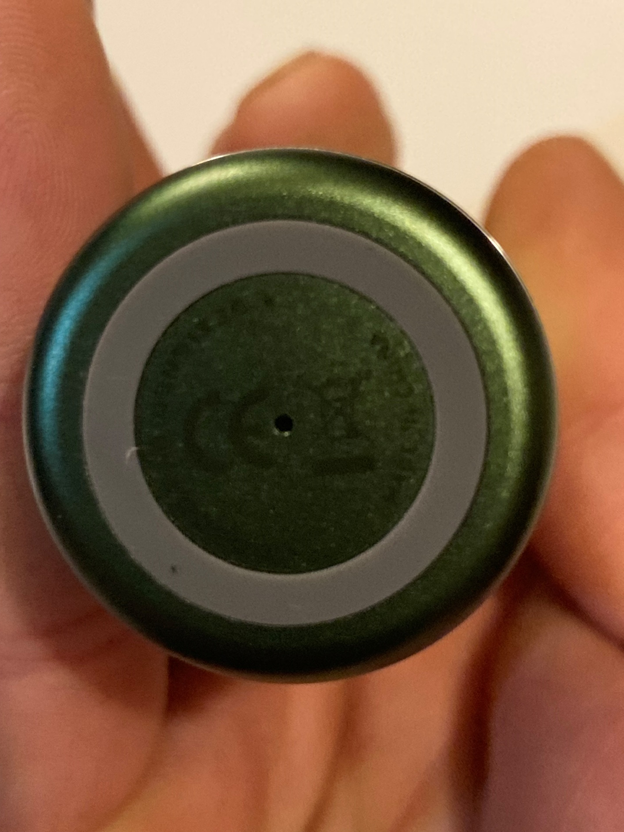 Since there isn’t a display, the Doric 60 uses the lights above the button for notifications. The following are the indicator light instructions.

– In use: – Under normal working condition the corresponding indicator light will become gradually brighter

The pod tank that is included in the kit is the PNP tank that we have seen several times on other devices. The drip tip is not replaceable and the pod is bottom fill with a rubber plug and a decent sized fill hole. In the past I have gotten a decent amount of condensation and even a little leakage with some coils while using the PNP tank. I don’t know if something has changed but I’ve gotten very minor condensation and no leaking during my time testing the Doric 60 with the PNP tank.

I won’t go into great detail on the PNP tank since I think most people have either used one or seen one. I’ll just say that I’ve always gotten really good flavor using the PNP coils and prefer the .15, .2, and sometimes the .3 ohm coils. 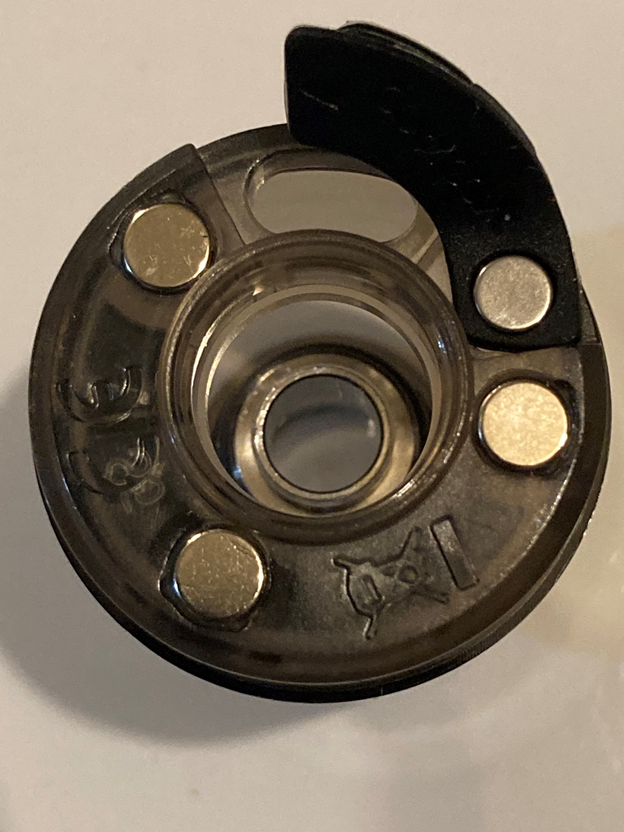 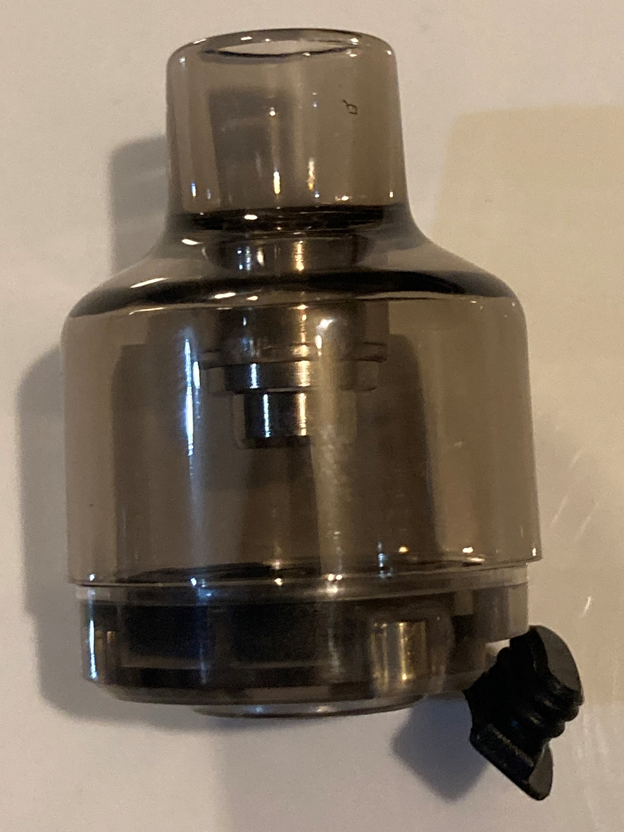 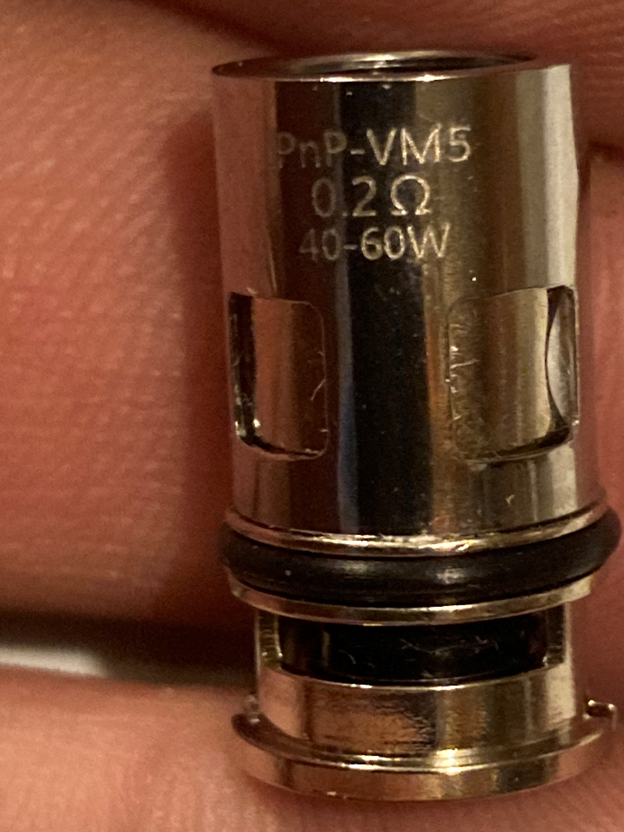 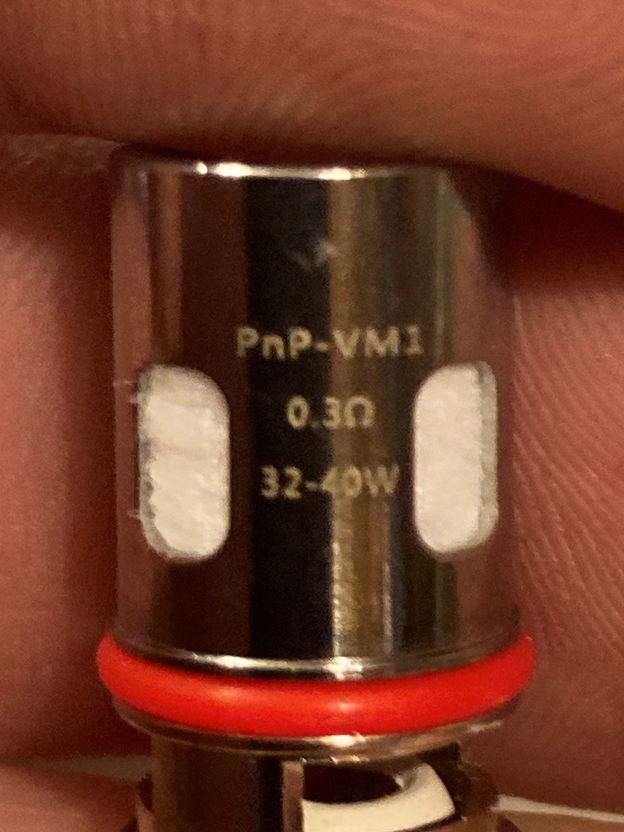 The Voopoo Doric 60 is a very simplistic designed tube mod with just enough functions and features in my opinion to make a good pocket carry on the go device.

Being compatible not only with the PNP tank and series of coils but also being able to use the MTL pod makes it useable for an entire array of vapers. That along with the quick change airflow control going from DTL to MTL makes the user experience easier. Also changing the output range according to coil resistance using the Gene chip is a nice feature as well as being able to choose between one of three output levels.

I do like that the Doric 60 offers both auto draw and button activation but once again feel like the auto draw function could work better when the airflow control is more open for RDL and DTL. I’m not really a big fan of auto draw anyway so the operation didn’t have much effect on me since I prefer using the fire button. That being said, if it’s going to be advertised as a feature then it should work well. One other thing I found to be odd was when button firing it seems to have about a 5 second cut off but not when using auto draw.

Overall I’ve enjoyed testing the Voopoo Doric 60 that was sent to me for this review. So would I recommend it? If you are looking for a medium sized pocket carry tube mod that delivers pretty good flavor and is simple and easy to use then yes.

I’d like thank Voopoo and Aimer for sending the Doric 60 kit for this review and a big thanks to the readers. Below is a link to the Voopoo website product page.