Hello again everyone and welcome back for today’s review of the UWELL CROWN V KIT that was provided to me from SOURCEMORE for the purpose of this review. At the end of this review I’ll drop a coupon code and link to the CROWN V KIT that can be purchased at SOURCEMORE for a substantially reduced price of $47.99. The CROWN V mod is a dual 18650 device that has a wattage range between 5-200 watts and has 2 power choices being wattage and TCR, there is no independent metal choices only a TCR setting for the user to set themselves. The CROWN V Tank that is included has a 5ml capacity using a bubble glass tube. Now that the basics of this kit are out of the way, lets get to know the CROWN V KIT.

INCLUDED IN THE BOX 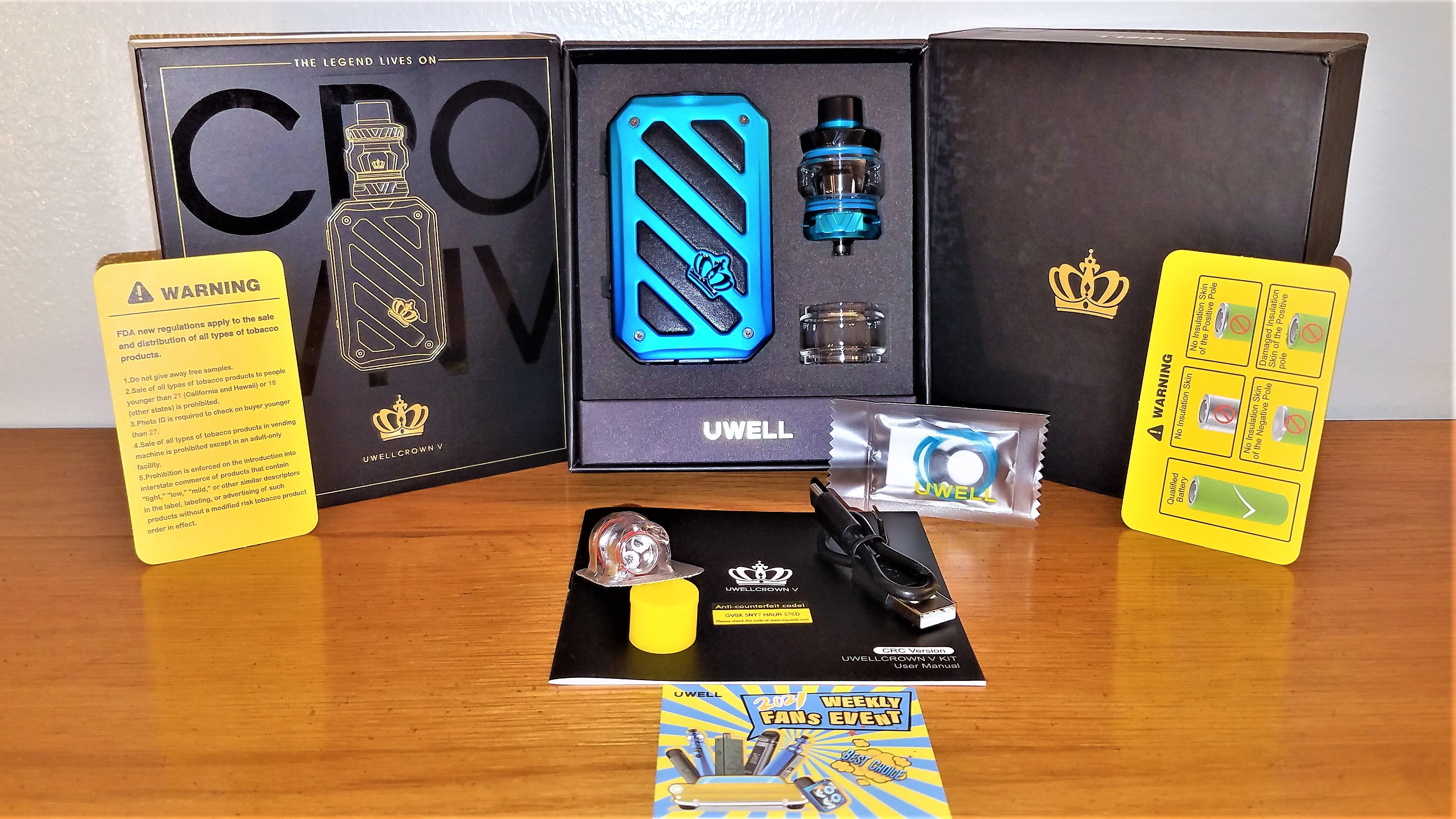 * An upgraded version of Crown 4 Tank

BREAKDOWN OF TANK AND DEVICE

After opening the nicely packaged box and seeing all main components in their own spot on a foam cutout I was thrilled to see everything lived up to the beautiful images that I had seen of this kit.

I was lucky enough to receive the blue colored version ( my favorite color ) and really like the way the dark blue at the bottom of the device transitions to a lighter shade of blue at the top matching the CROWN V Tank, even the drip tip has a color matching metal band at the base for a attractive accent, even the O-rings are color matching. Both sides of the device have 5 diagonal leather accent panels within the side panels of which only 1 is removable because it’s the battery door cover.

The battery door cover has the CROWN logo on a angle towards the bottom. There is a small bump out on both panel sides at the top center allowing up to a 25mm atomizer to be used without overhang. UWELL list the CROWN V Tank as 29mm but that’s at the center of the bubble glass tube, the base is actually 24mm. 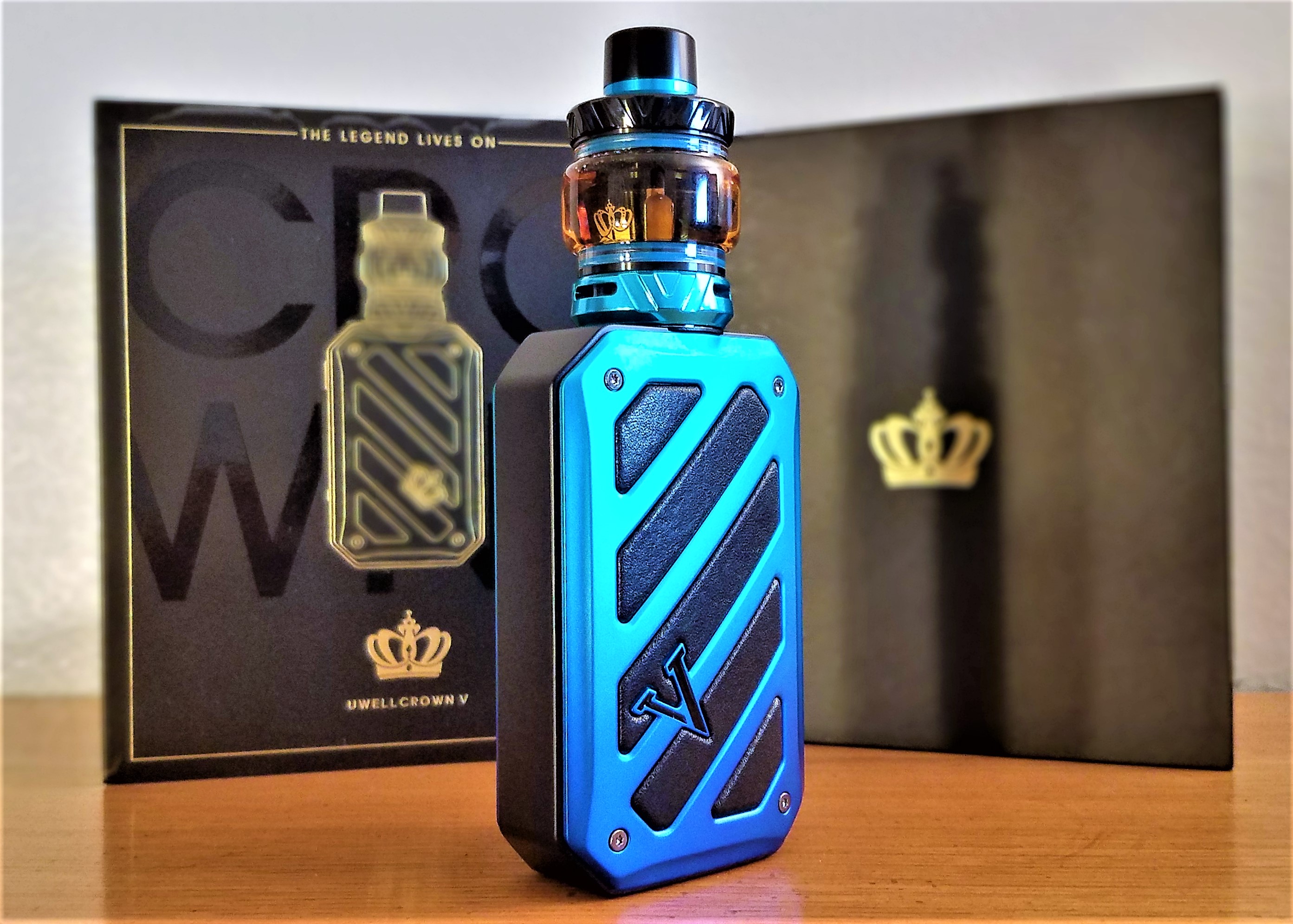 The CROWN V Tank has a childproof top cap that just spins if you try to open it normally, it must be pushed down and turned until it locks into it’s groove where it can be opened by twisting counterclockwise.

The Tank uses a single fill port with a silicone membrane that seals itself back up after the juice bottle tip is removed. These membrane fill ports work very well and more and more manufacturers are beginning to use them.

You can see just how close the coil is to the top cap which also aides in flavor leaving little room for vapor to travel to the drip tip. 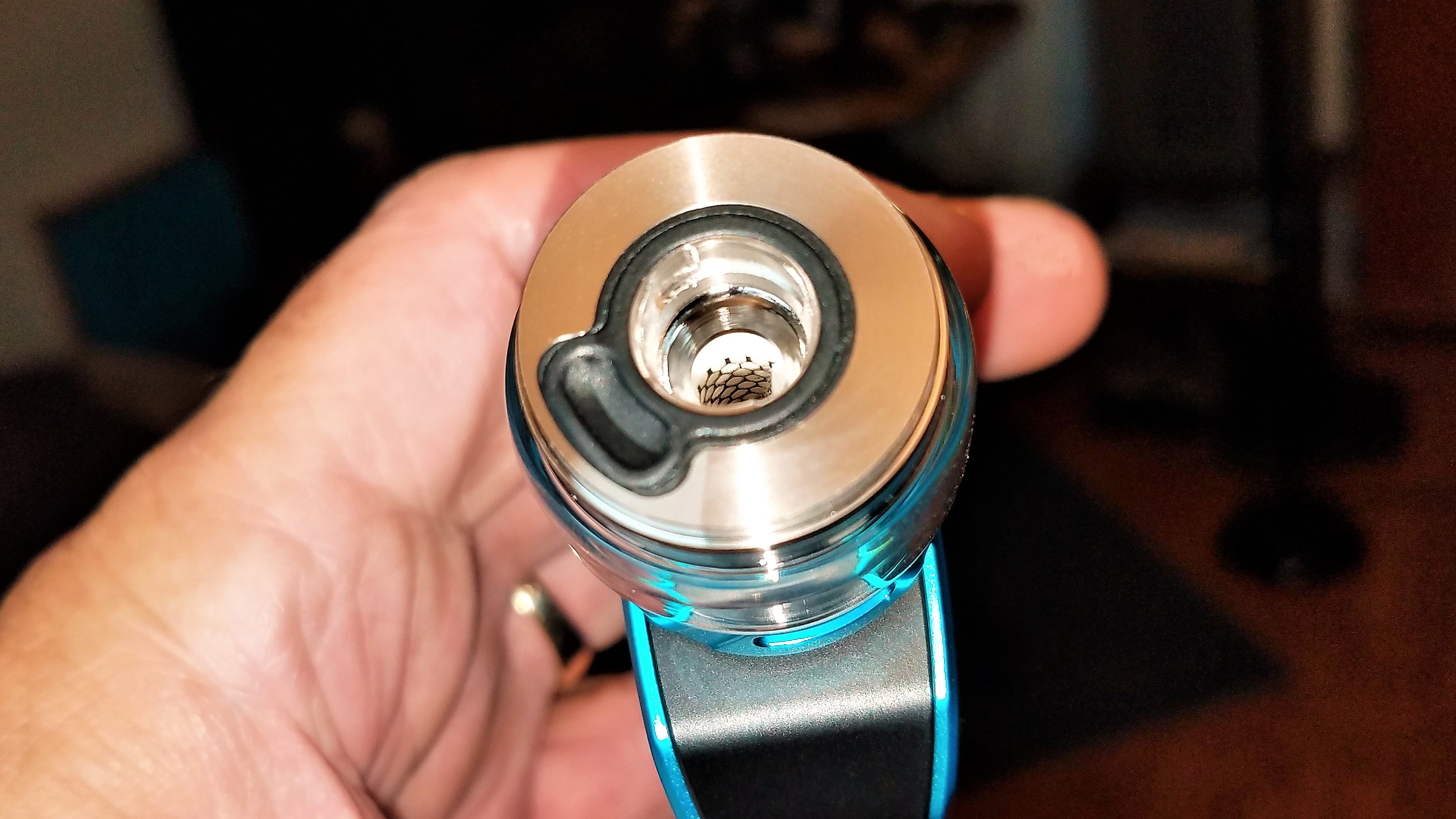 Coils are a push and pull type and use the UWELL PRO-FOCS technology that controls the heating temperature as well as absorbing your juice in the condensation holder at the base of the tank reducing leakage by recycling it and self cleaning itself when vaping. UWELL provides 2 bubble glass tubes in this kit and I kind of with there was a straight glass option as well.

The CROWN V Tank is also a looker and having everything color match the mod really makes it look upscaled. The inside of the tank has a look what some may say resembles a crown with the crown logo stamped on one of the arches inside and a minimum juice level marking as well on it’s opposite side. The number V is all around the top cap as well as the tanks triple slotted airflow base 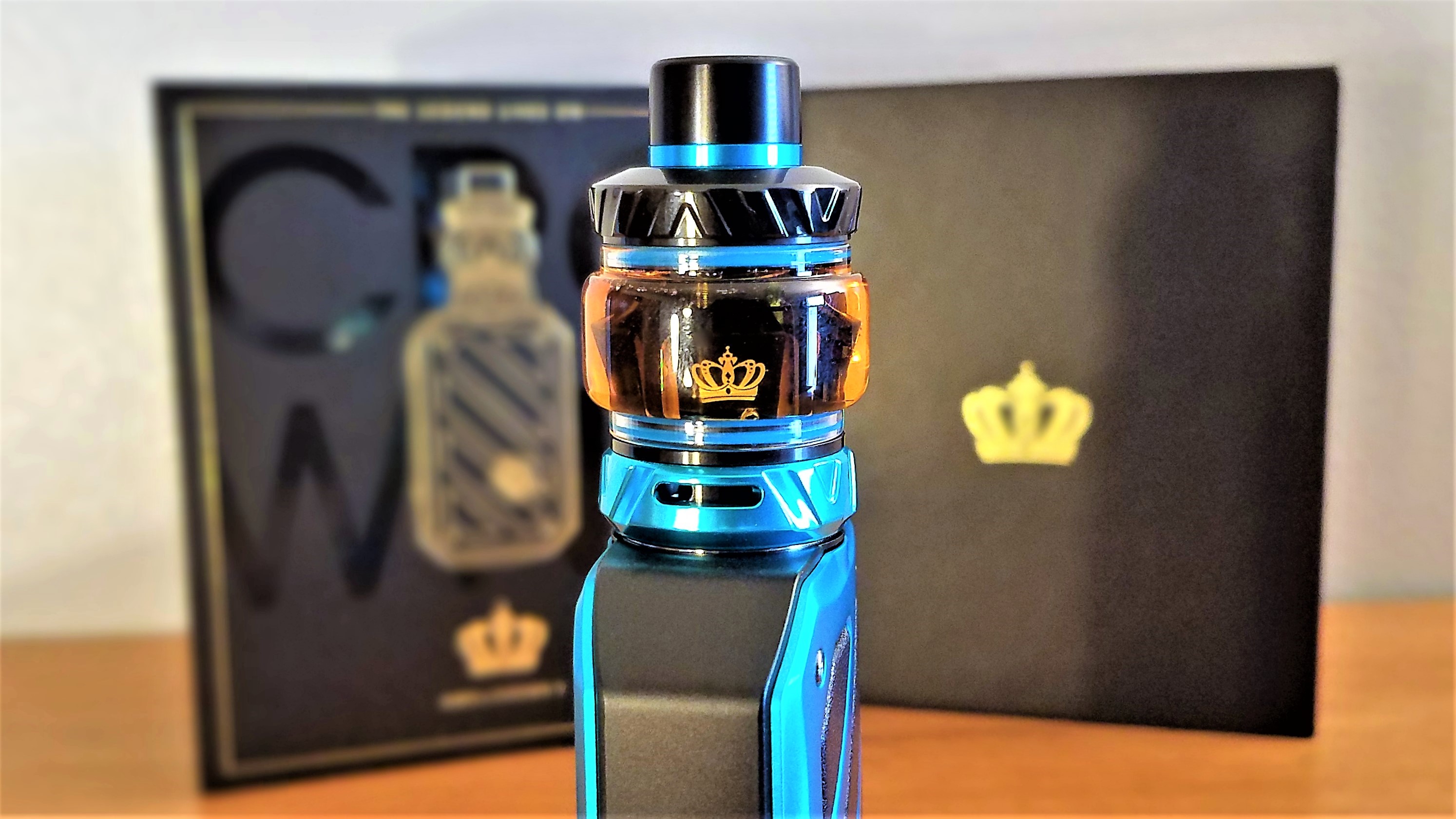 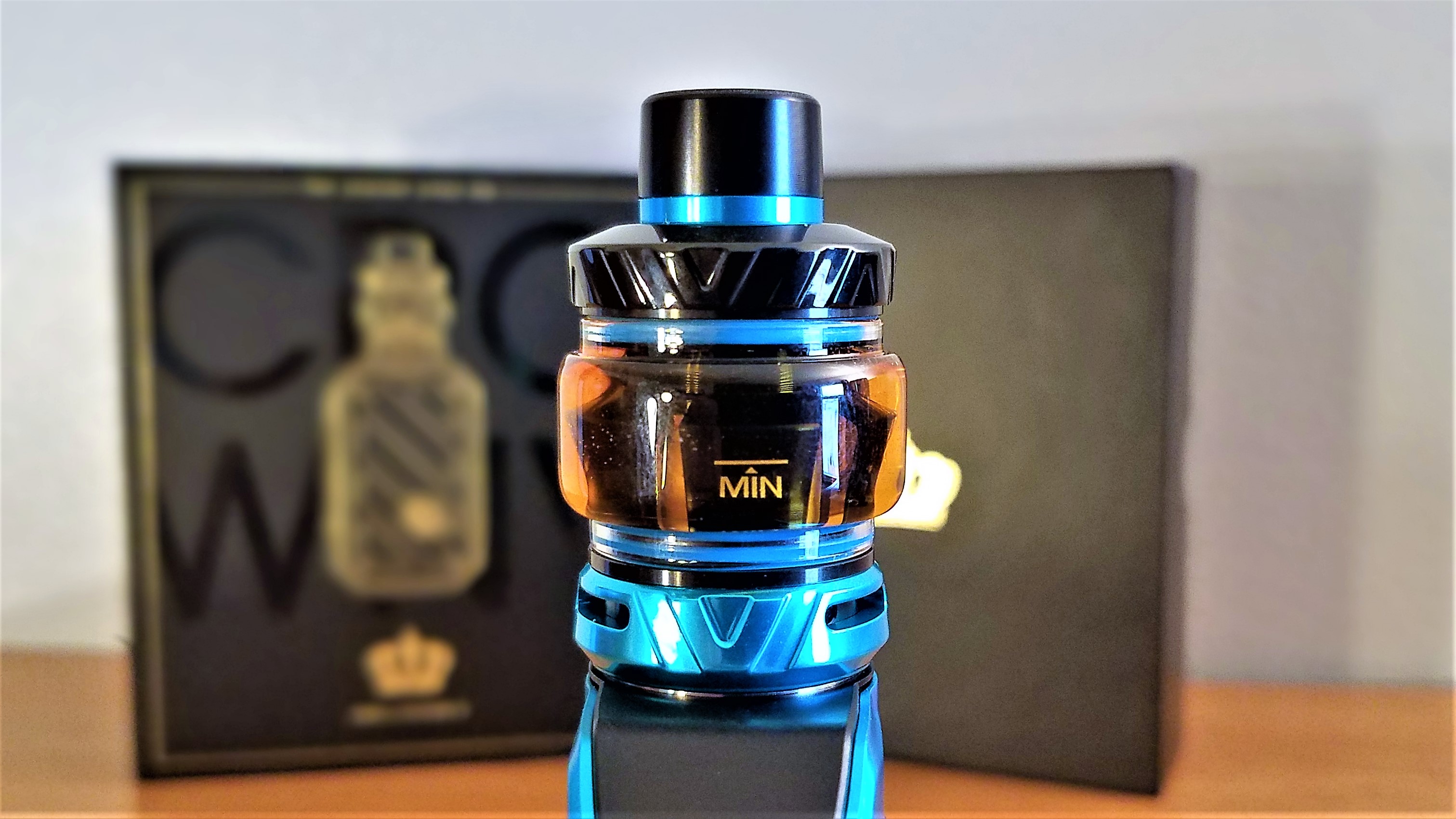 Working our way down from the tank we now come to the small lightweight CROWN V Mod in all it’s beauty. This is a pretty small dual 18650 device and it’s also fairly lightweight. Batteries are housed inside the device with a removable panel to install and remove them. Battery polarity is clearly marked inside on both battery locations and the device has a perfectly sized battery ribbon that wont bunch up when putting the cover back on. The battery cover is held on using magnets that are hidden as none can be seen.

The cover with the CROWN is the only panel that can be removed, the other cover has the roman numeral V logo also placed on a angle at the bottom. As you can see all corners of the cover and device itself are rounded for a comfortable grip. On the very bottom of the device are 8 slots for battery venting as well as 2 rubber bumper on each side that keep the device secure without sliding, it is a rather slim device and can tip over if not careful. 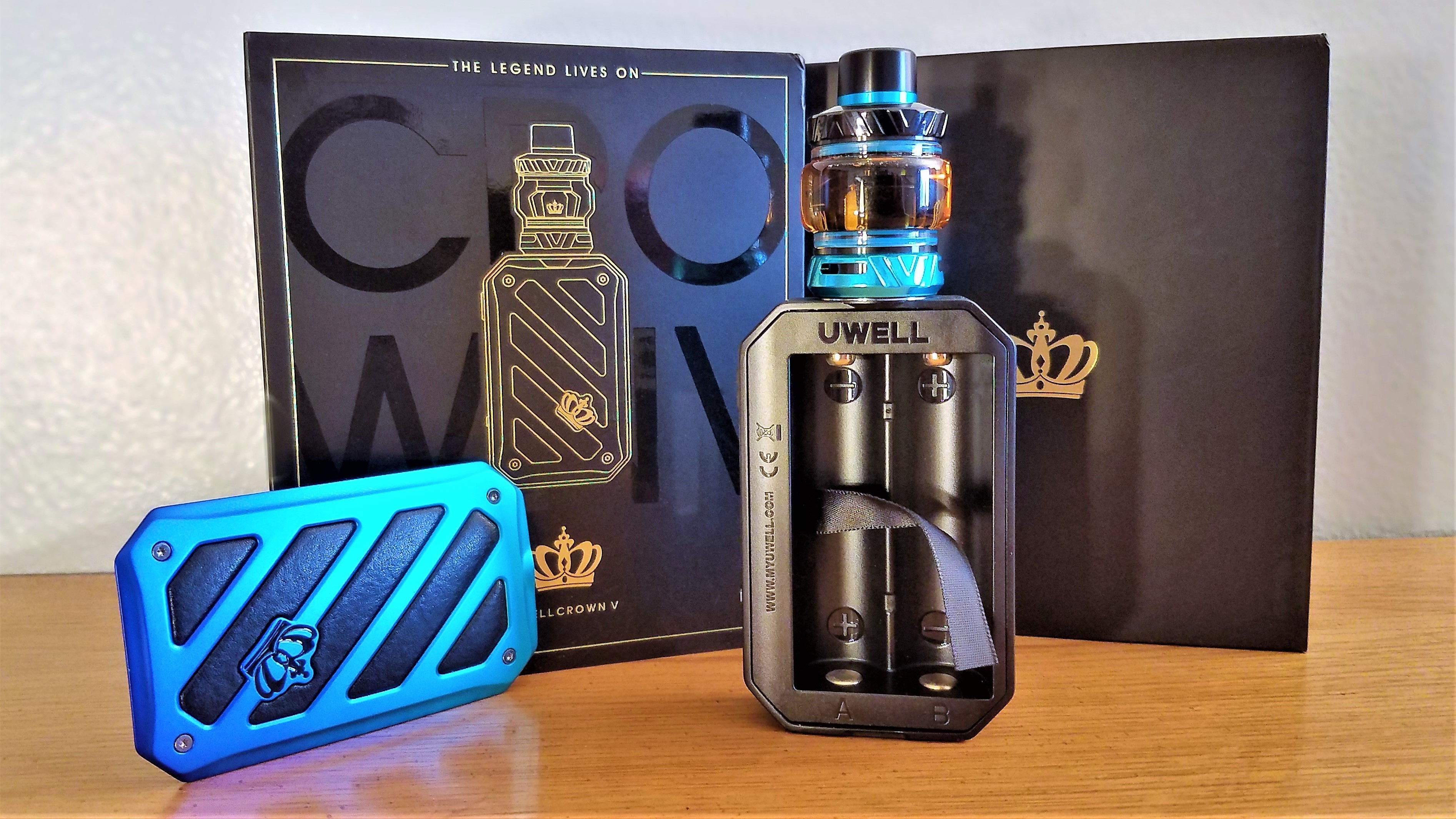 The multi colored display screen is a pretty bight one indoors and works well outside but becomes difficult to read in direct sunlight, fonts are very sharp and clear with the power mode in the upper left corner being just a tad to small making it hard to read. The device information is laid out well and is from top to bottom and left to right. 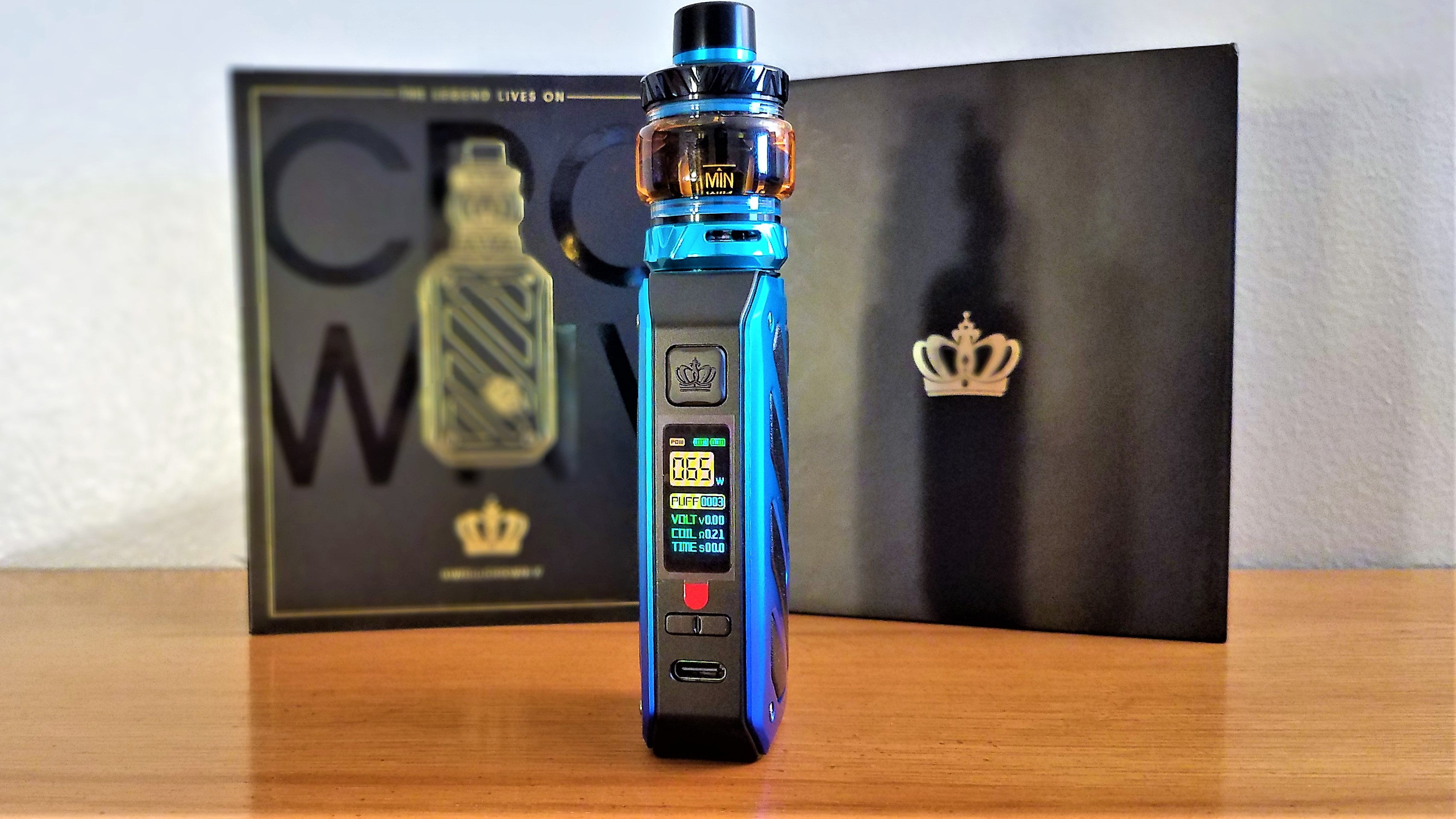 Another nice feature is the menu, it’s a very easy one to navigate and only having 2 power modes makes that much easier. SS and Nickle200 TCR settings are in the user manual.

* POWER MODES – 3 Quick presses of the fire/power button, when flashing press the up or down button to change modes to either Power or TCR

* Temperature can be adjusted using the up or down buttons.

When I tell you this is a very small device I’m not kidding, I just recently reviewed the Geekvape OBELISK 200 that is billed as the smallest dual 18650 device made and I did measure them next to one another and yes the OBELISK 200 is smaller it’s just by the skin of it’s teeth, they are neck and neck in this department. 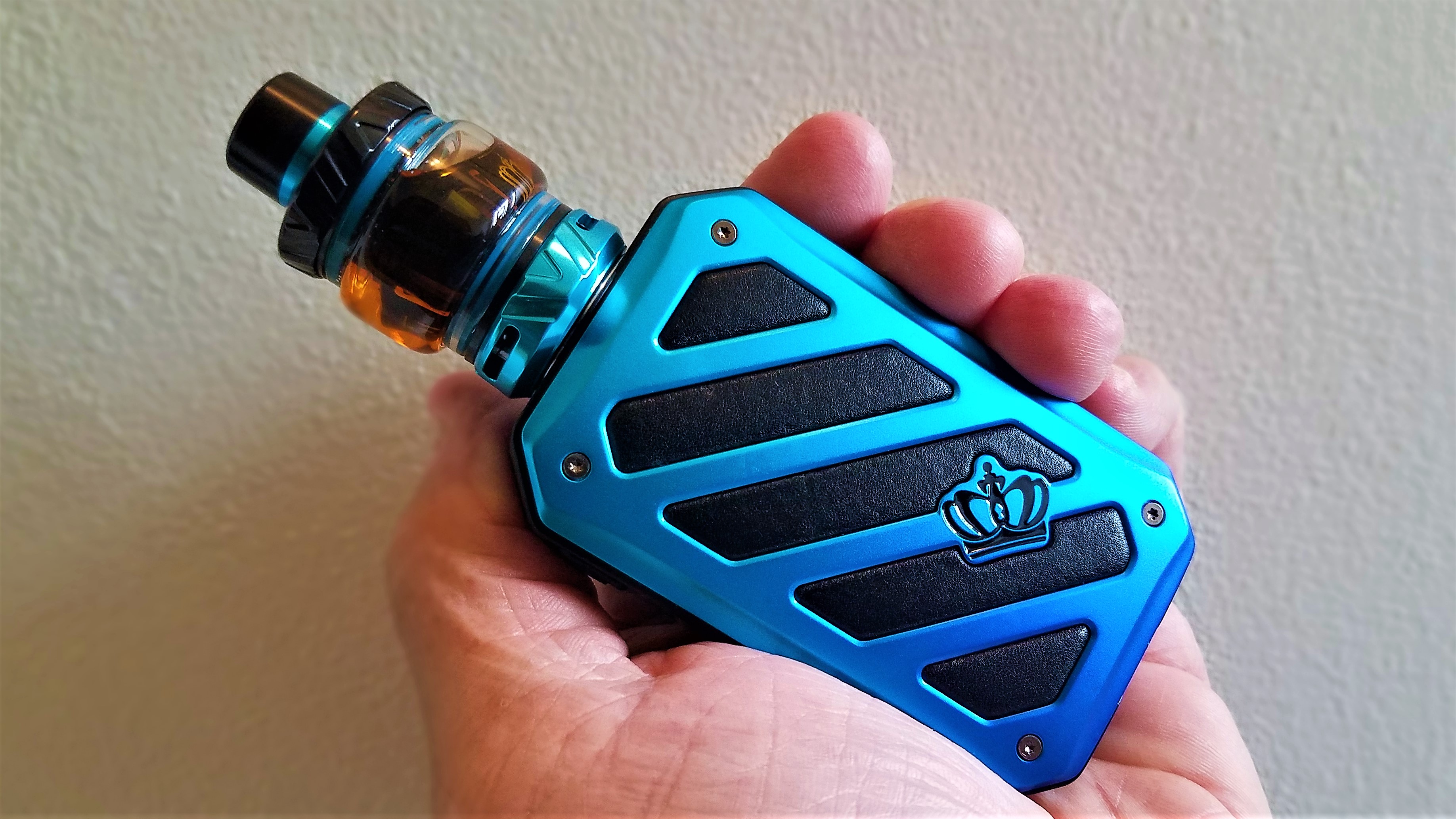 * Smooth airflow at any setting

* Can be tipped over because of thin base

* Can only use up to a 25mm tank without overhang

I have to say that beauty alone scores this kit very high with it being very comfortable to use either trigger finger or thumb firing as well, it actually lived up to the hype.

For some reason I have had quite a few UWELL devices come my way as of late and really love their drop in coils for great flavor and both coils provided in the kit are no exception. For me there is no clear preference between the 2, I like them both equally the same, the dual will restrict airflow some but flavor is the same on both.

With the tank having 3 airflow slots I really thought it would be a air machine of which is not my choice of vaping, but I was surprised to find the airflow just fine fully open or reduced a very small amount not even a quarter for a smooth vape. There are no whistle or funny sounds at any setting.

Many vapers have young children and having a childproof top cap just insures a bit more safety and it works very well and it’s easy to operate.

Getting back to the device there is another nice feature that I forgot to mention and it has to deal with the battery bars, as power is drained from both bars when it reaches half the battery bars turn from green to blue . Further draining changes the battery bars to red and at that point it’s time to replace or charge the batteries.

There are a lot of extra nice touches that UWELL put on both the tank and mod that they didn’t have to but I’m very glad they did.

The chip used in the CROWN V works great giving instant fire with 0 ramp up. In the time that I’ve used it I have had 0 leaks from the CROWN V Tank and it’s performed great.

The CROWN V Mod has also functioned flawlessly and I will continue using both for some time to come, I 100% recommend the either the tank or mod as stand alone items but really think together they really stand out from the rest.

I mentioned in my opening statement that I would have a coupon code for you as well as a direct link to SOURCEMORE for the purchase price of $47.99. The code is CRSK with the link
Uwell Crown V Kit 200W Box Mod with 5ml Crown V Tank

Blind Man's Bluff This Is Trouble

HELP: My Mix is in need of a Holiday | Vaping Underground Forums