Hello. It’s been a while since I’ve done a review for Sourcemore but here I am again back in the saddle. Today I’ll be covering the new Uwell Caliburn G2 Pod Kit. I have reviewed a lot of pod devices but never did review the Caliburn G but did more recently review the Caliburn A2 and liked it well enough. Where the A2 used disposable pods, the G2 actually has replaceable coils. It also offers adjustable airflow but does it in a really different way than I have seen on any other pod. I’ll get into that more later. The battery capacity of the G2 is 750mah and the included pod has a liquid capacity of 2ml which seems to be very much the norm on many pods.

I like how the packaging for the G2 has the clear window on the front that allows you to see the actual device and color inside instead of using a generic picture that may or may not be the color of the device you have received. The black with gold writing is quite attractive to me.

The back of the box has quite a bit more information than I’m used to seeing on most devices. There is an interesting rating scale for each coil, a definition for each of the terms used, some features, and of course a list of the contents. 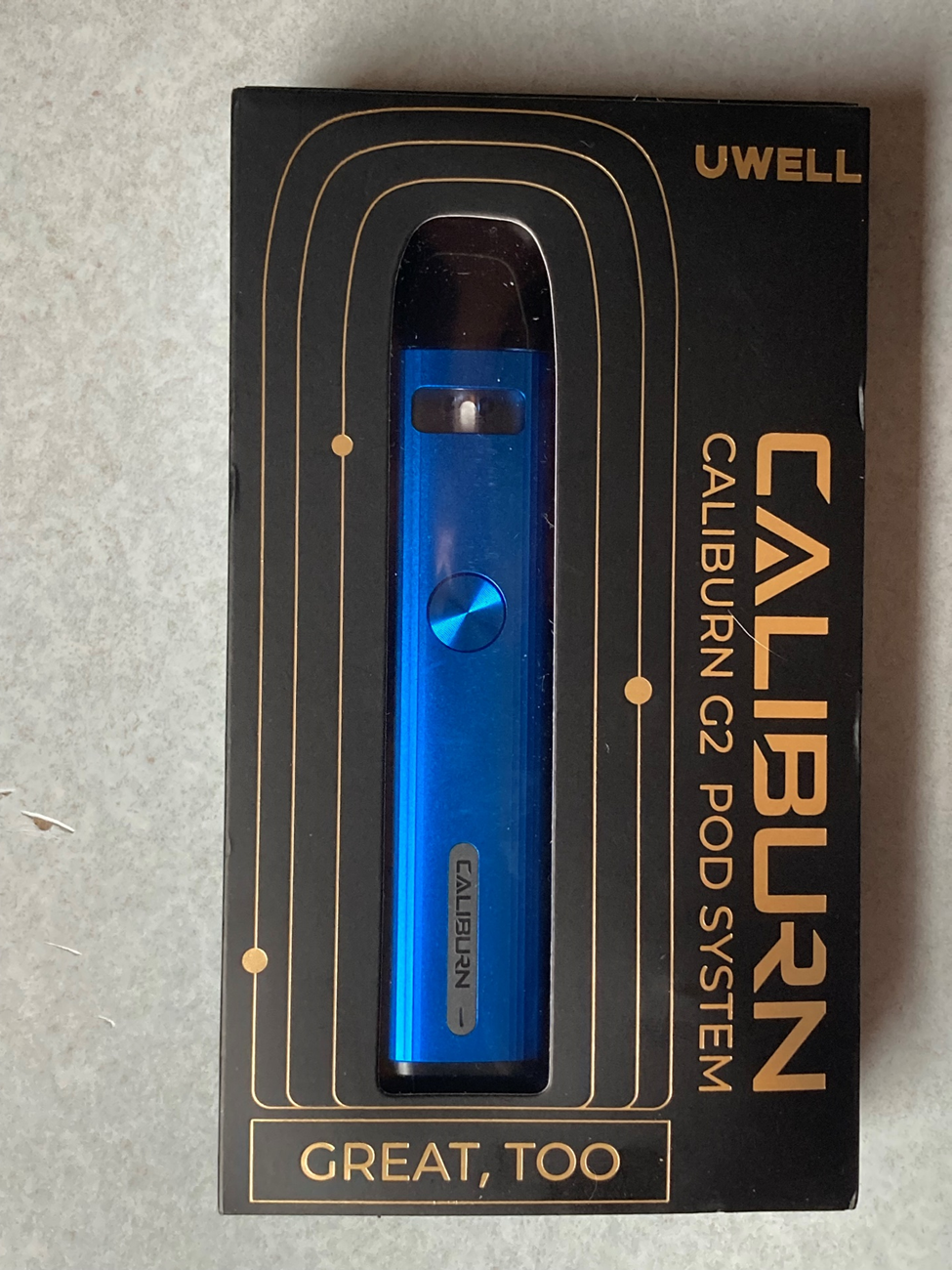 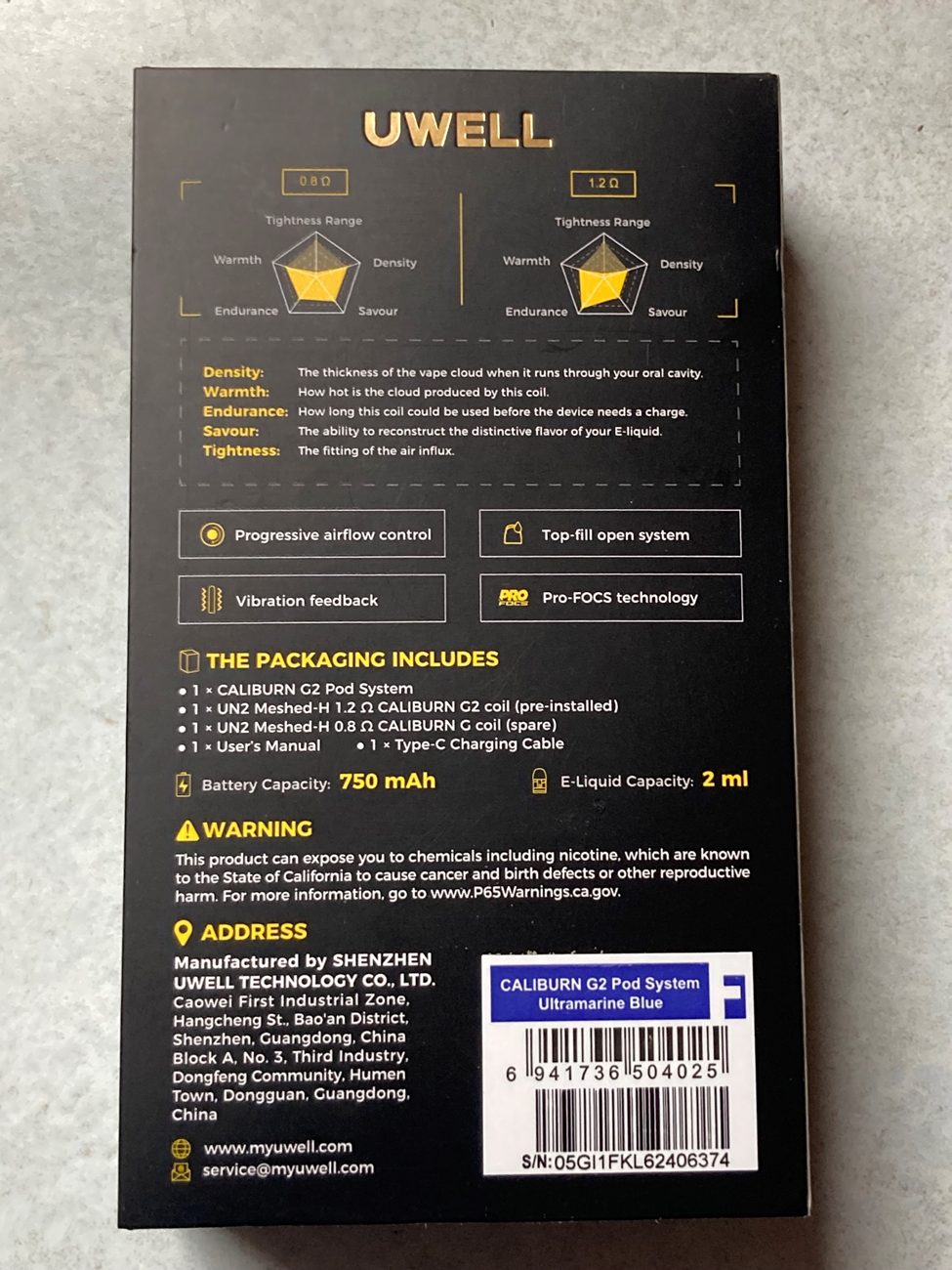 Once opened, you can see the pod device with pod and 1.2 ohm coil already installed as well as the spare .8 ohm coil and charging cable. The user manual and safety cards are located underneath the plastic tray. From what I understand, the .8 ohm coil is the same coil that was included with the original Caliburn G but the 1.2 ohm coil is new to this kit. 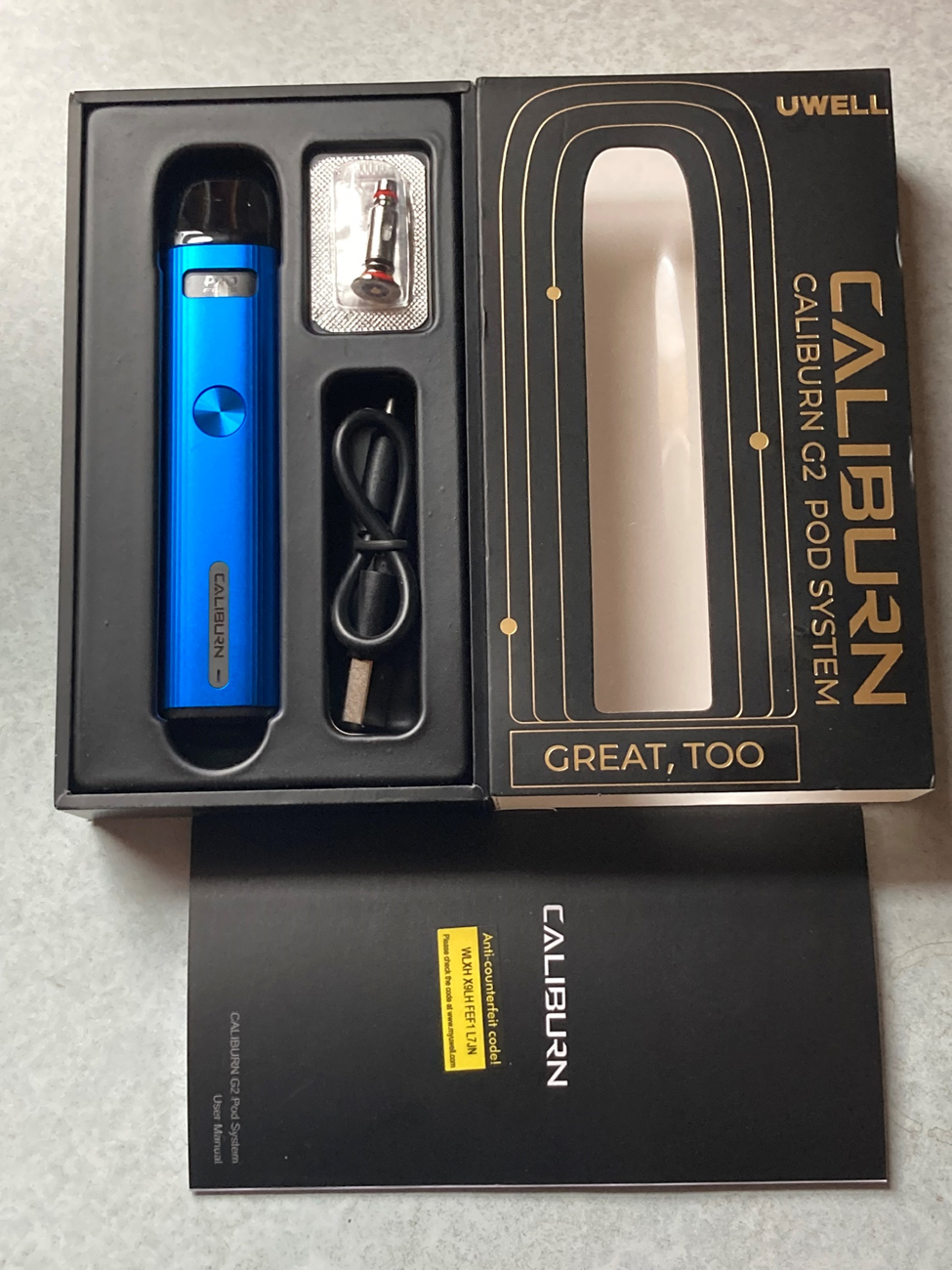 On the front of the G2 is the Caliburn name along with the fire button. Below the Caliburn name is the battery indicator light which will show Green=60-100%, Blue= 30-60%, and Red=less than 30%. At the top is a large opening where you can easily see the liquid level of the pod while inserted. The back of the device has the same cut out so you can see all the way through which makes it very easy to see the liquid level. There isn’t any branding on the back side. The flats of the device are smooth while the sides are grooved which gives it a nice appearance as well a nice hand feel. Also on each side is a single airflow hole. The G2 has some built in safety features. Besides vibrating when a pod is installed or when it is plugged into charge, it also gives the following indications.

During charging the device led will go from red to blue to green and once it is finished charging then it will vibrate once and the led will be solid green. 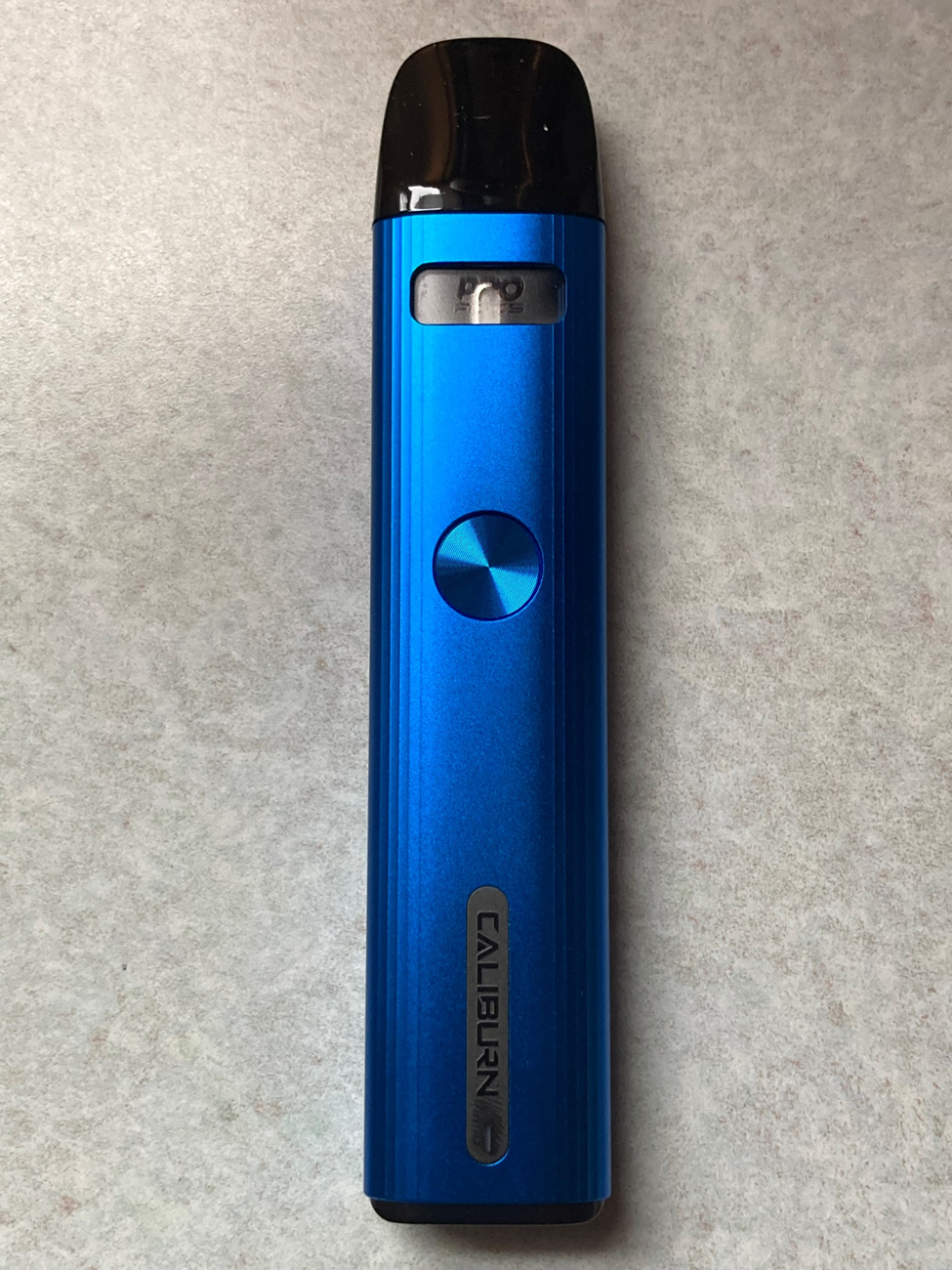 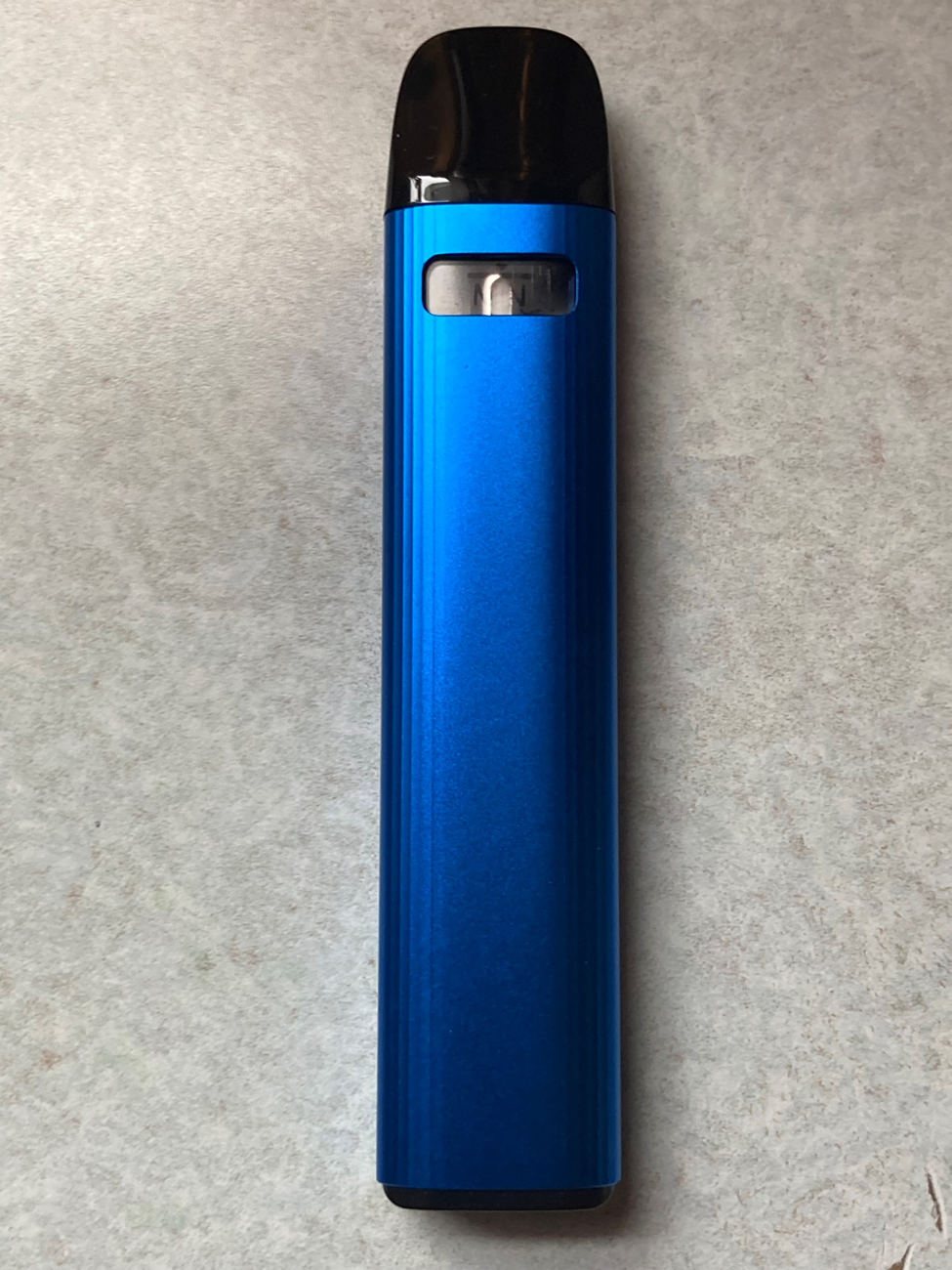 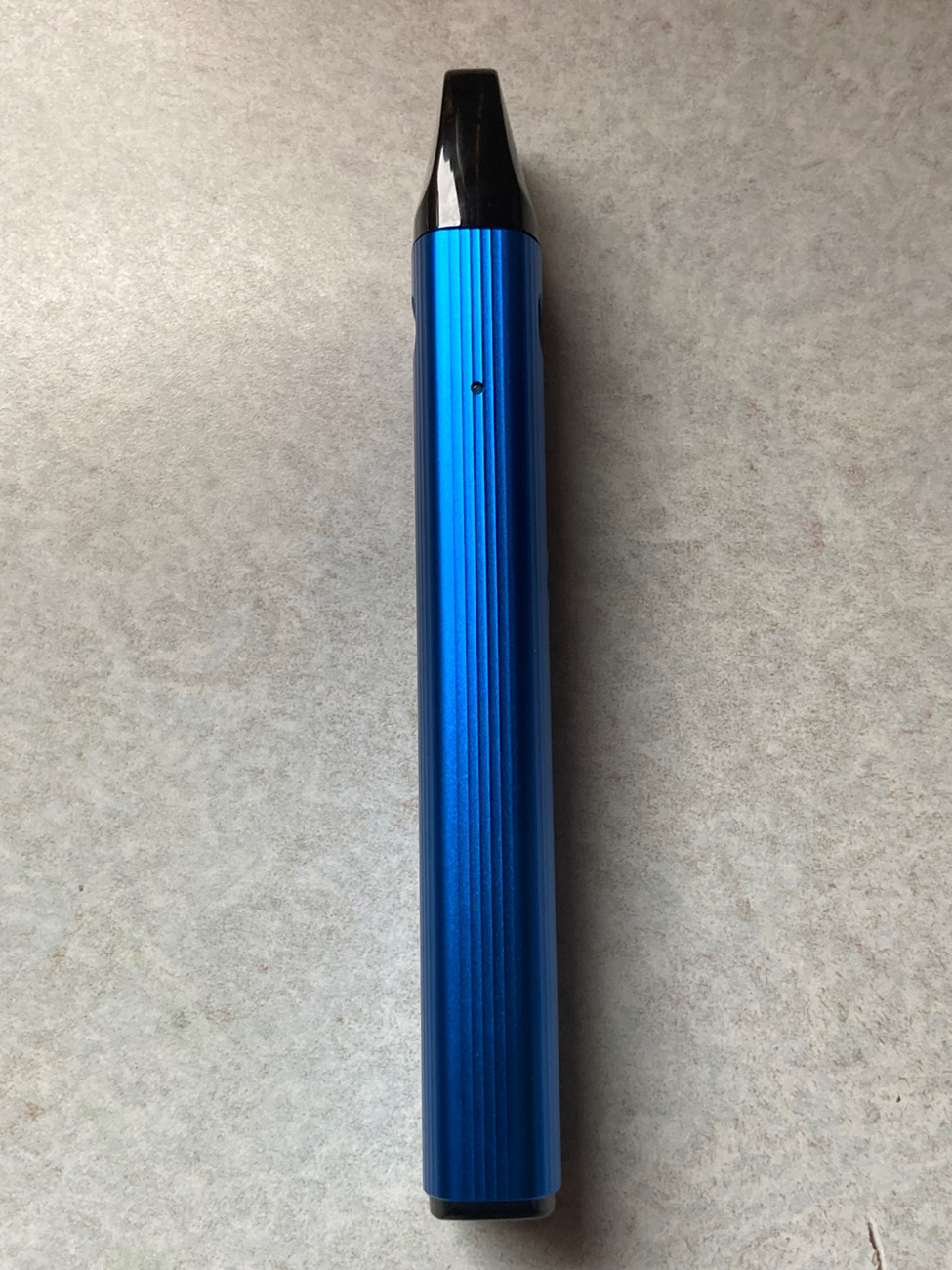 The bottom of the G2 is where you’ll find the USB-C charging port so you won’t be standing this one up while charging. Really most pods aren’t good for standing up and I’ve just become used to laying them down when not in use. Above the charging port is the Uwell name molded into the plastic. I believe the body of the G2 is made of aluminum while the base is made of plastic.

As I mentioned earlier the G2 has an internal battery rated for 750mah that can be fully charged in a little over half an hour. To turn on the G2 just press the fire button five times. To activate the output then you can use the fire button or us the auto draw feature. I felt like I got a little stronger output when using the fire button compared to auto draw. However the auto draw on the G2 works very well from what I have experienced. With the adjustable airflow you can get anywhere from a somewhat tight RDL to a tight MTL. I thought that perhaps with the two holes in the body that I might be able to close the airflow adjustment all the way and get a really tight MTL but that wasn’t the case. With the airflow adjuster closed the device is not useable in my opinion. I’ll show a picture later of how to adjust the airflow. 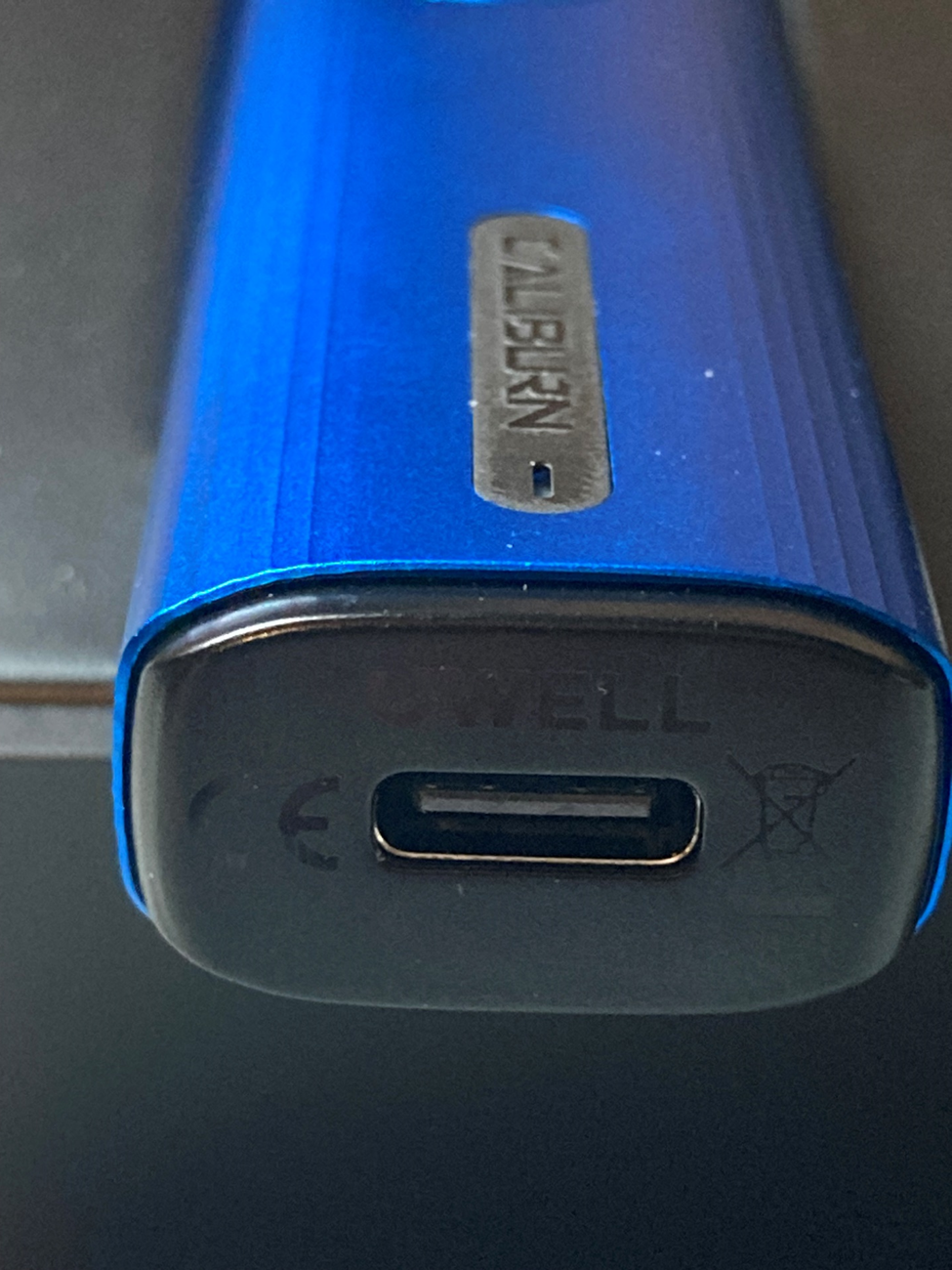 The pod port of the G2 has no magnets. There are two spring loaded contacts inside to make contact with the coil once the pod is inserted. When the pod is inserted, the G2 vibrates to let you know that it has made connection. The pod locks into the G2 very securely and doesn’t come loose accidentally. It’s a little hard to see in the picture but there is a cut out with a rectangular hole and a round hole and a raised ledge around it. The rectangular hole is where the turn wheel for the airflow adjustment rests and the round hole is the airflow opening. There is the same set up on both ends of the opening so you can insert the pod either way and it will still align and work.

Ok, and finally to take a look at the pod. As I mentioned earlier, there are no magnets used on the G2 pod. The coils are a push in style coil but there is a flat side on the bottom of the coil that you have to align with the flat on the pod to get it to seat properly. Once the coil is inserted then pop the mouthpiece off to top fill the pod. There is a red rubber gasket over the fill port opening to prevent from leaking. I do like this better than having to remove a plug to fill. On the opposite side is an opening to let air escape while filling. I use 10ml plastic bottles for most pods and this one was easy to fill quickly with that bottle.

Now on to the airflow adjustment that I have mentioned a couple times earlier. There is an orange turn wheel on the bottom of the pod that you can see in my second picture below. This adjusts the airflow allowed into the pod and turns infinitely with no stop. I kind of wish it did have a stop so that I could better judge where I have the wheel located instead of having to grab a magnifier to see where it is set. Of course I don’t have the best eyesight so others may be able to see it better. As you can see in the picture, I did get some condensation/liquid around that adjuster. I ran the 1.2 coil for four days when this picture was taken. I didn’t get any noticeable liquid outside the pod with the .8 ohm coil.

I think that Uwell makes some really good pod devices and this is one of them. I ran the 1.2 coil for four days and honestly that was about as long as I could stand it. It just didn’t fit my style of vaping no matter where I set the airflow. At first I thought it was the mouthpiece that was throwing me off since I’m used to using a different pod device with a different mouthpiece. After switching to the .8 ohm coil I knew it was the coil and not the mouthpiece that I wasn’t happy with. I liked the .8 ohm coil with the airflow mostly open. This surprised me as I usually run a 1.2 pod with the airflow somewhat restricted.

The airflow sensor on the G2 works very well. No matter whether I had the airflow wide open or shut down tight, it always worked very well and didn’t take a strong pull even with the airflow open to activate it so whether you like a tight or loose MTL it will work. Also I was able to get a restrictive direct lung with the .8 coil and the airflow open.

I very much like the viewing window for the G2. It’s nice to be able to tell exactly how much liquid is left in the pod. I ran it until the liquid was down to the bottom of the window and then refilled it. Also with the pod being a top fill I didn’t have to remove the pod not only to see the level but to refill the pod. Just pop the mouthpiece off and refill. I will say that so far the mouthpiece is on very tight so it takes a bit of effort to remove it. I would think this would get easier with time but don’t know for sure.

I did get a tiny bit of liquid around the turn wheel adjuster on the pod but nothing to worry about in my opinion and did not get any using the .8 coil. Maybe the 1.2 wasn’t seated all the way or something. Although there are two coils included in the kit, I do wish there were also two pods included. I’d like to be able to run two different liquids by just switching pods or even just to have a second back up for carrying around another filled pod.