Hello everyone. I’m here this time with a review for a company that you may not know much about. To be honest, I really wasn’t very familiar with them until they contacted me and asked me to do a review for them. I’m sure the suspense is killing you by now so I’ll go ahead and tell you that the company I’m speaking of is Univapo. I’ve heard a little talk here and there on the forum about some of their pod devices but not a lot. They are looking to grow and get their name out. I was sent their Miso Pro pod device in order to provide a fair and honest review for you the readers and perhaps help you decide if you’d like to purchase one to try. The Miso Pro is a fairly simple device but has a couple of nice features that I’ll discuss later in this review. 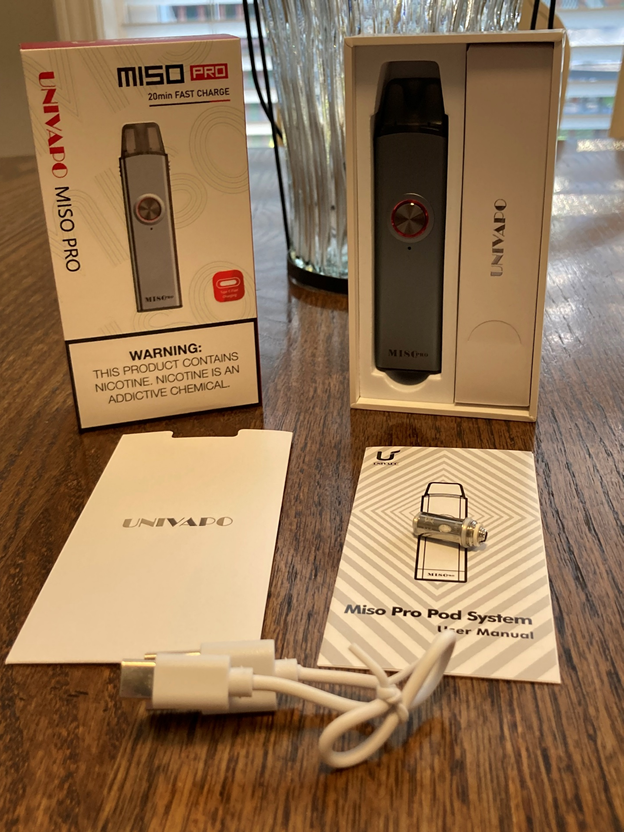 Yet robust, the UNIVAPO Miso Pro is designed for optimal portability.

Its 22mm bright fire button and smooth outlook appearance give it an ultra-modern premium look and feel. A powerfully elegant vaping device.

Fill From the E-liquid Filling Hole.

You can easily adjust airflow by turning the pod in other directions.

Taking you to flavor journey

Weather you go out or at work, we need a long-lasting battery. With 1000mAh ultra high capacity battery, you can use Miso Pro all day long without worrying about running out of battery. And once the battery is low, you can power it up with 5V/2A fast charging.

I thought the packaging on the Miso Pro was nice. The front of the box shows a nice color picture of the device inside and there is a tab on one end that makes it easy to slide out the tray that holds the Miso Pro and accessory pack. The envelope containing the user manual was on top and underneath was the device with a pod already installed and a coil pre-installed. There was a sticker with the Univapo logo on the bottom of the coil to keep it from being fired before it is filled.

Included in the kit was the device with the single pod and one coil pre-installed and in the accessory box was a USB-C charging cord and a second coil. The UNC coils included are a .8 mesh and a 1.2 ohm standard coil. I know it’s not common practice but it would be nice if there was a second pod included. I also received an extra package of .8 ohm coils for the review but it’s not included in the kit when you purchase it. You’ll just get the two included coils. 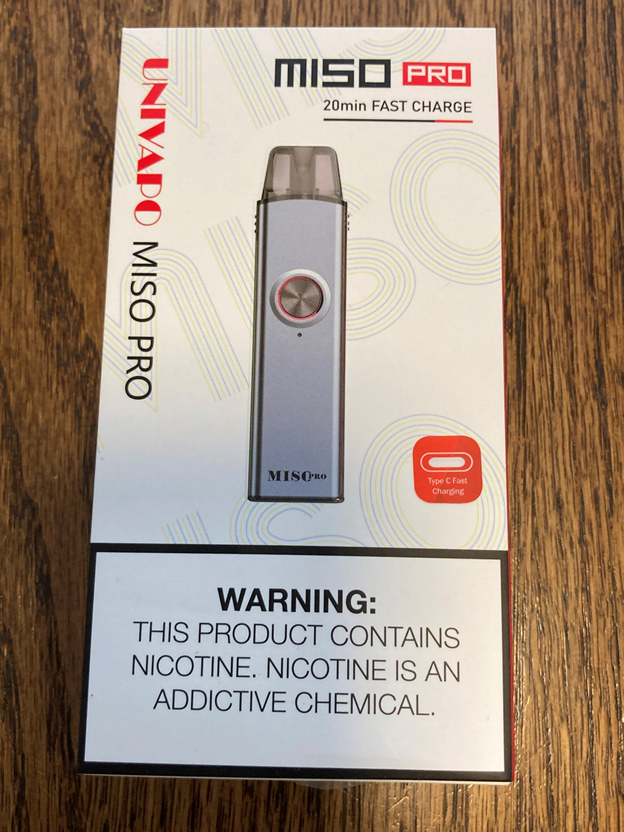 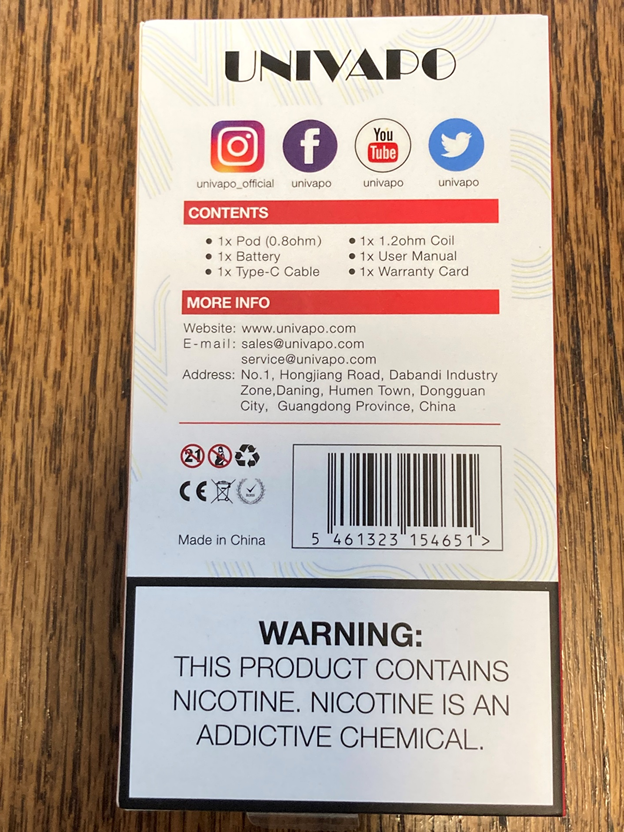 On the front of the Miso Pro is the large fire button and a single indicator light that illuminates when the device is activated. It can be activated by pressing the fire button or can be used as an auto draw device. The indicator light indicates the battery level. The color of the light shows three different battery levels. Green=High, Blue=Medium, and Red=Low. There are not different output levels on this device and it is determined by the coil resistance. As far as I know there are only the two available coils which are .8 and 1.2 ohm resistance. Also on the front near the bottom is the MISO PRO name etched. 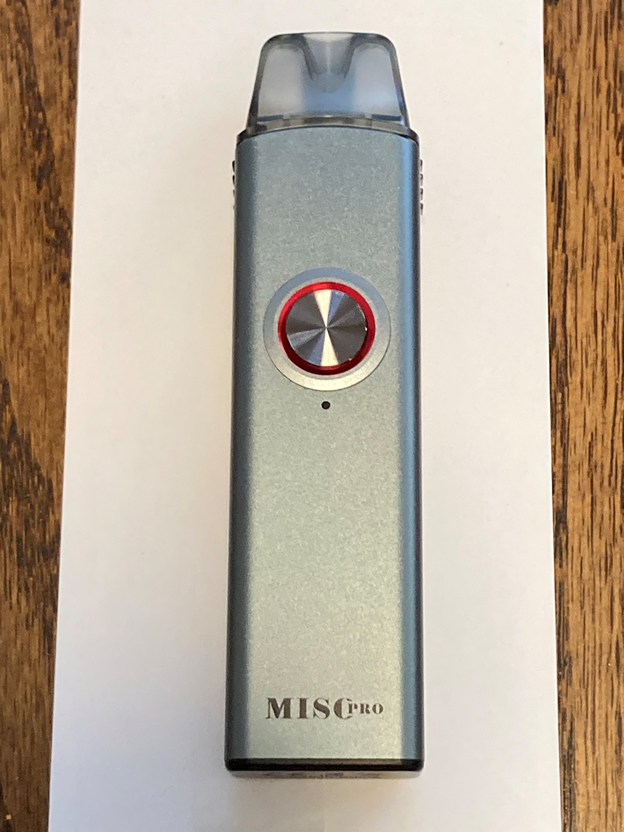 On the left side of the battery is the USB-C charging port which is rated for 5V/2A which if this holds true then should charge the battery in about 30 minutes or so. Also you can see on the left side since that’s the way I inserted the pod, is the side fill plug which means you can fill the pod without removing the pod which is a very nice feature in my opinion. The fill plug is pulled from the top but does not rotate so you may have to hold it out of the way while filling. It goes back in place very securely without any mess as long as you don’t over fill the pod. 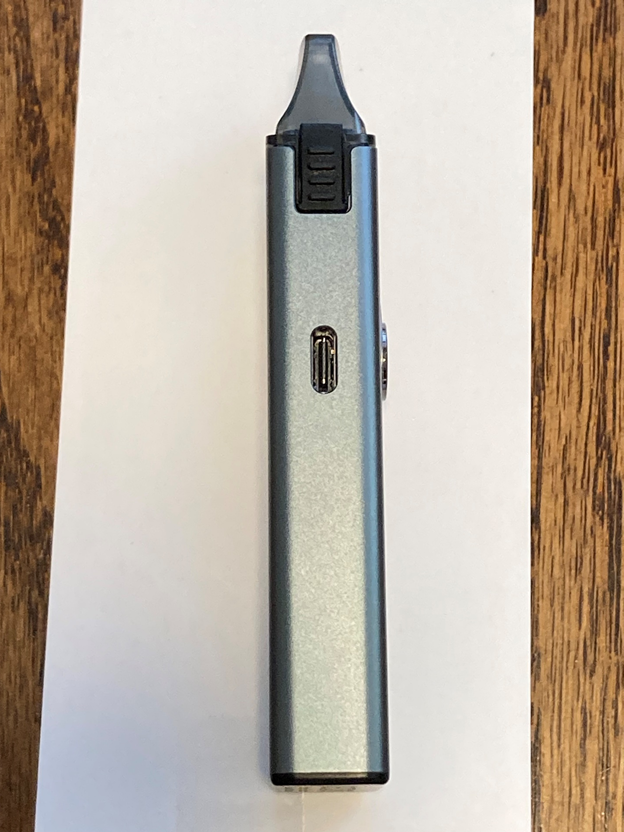 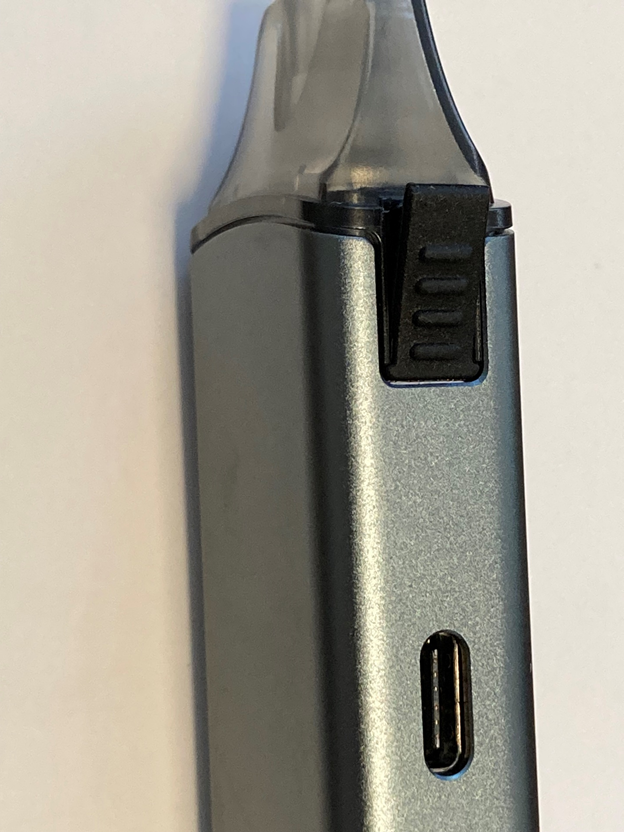 On the side opposite of the fire button side is the Univapo name etched near the bottom and there is no other branding on the unit. 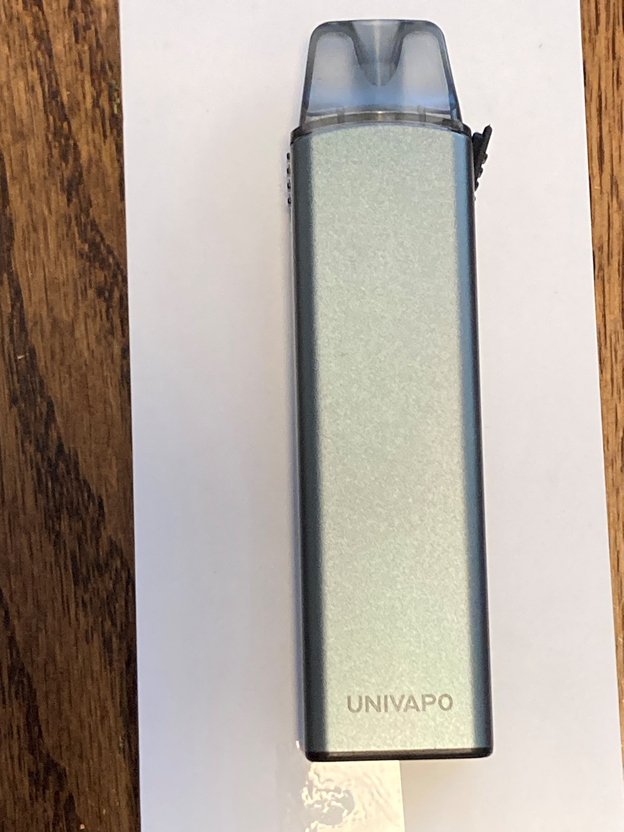 On the right side is a single airflow hole and there is a viewing window with horizontal lines molded into the side of the pod. The pod can be inserted either way so you can have the fill port and viewing window on either side. Rotating the pod does slightly affect the airflow. 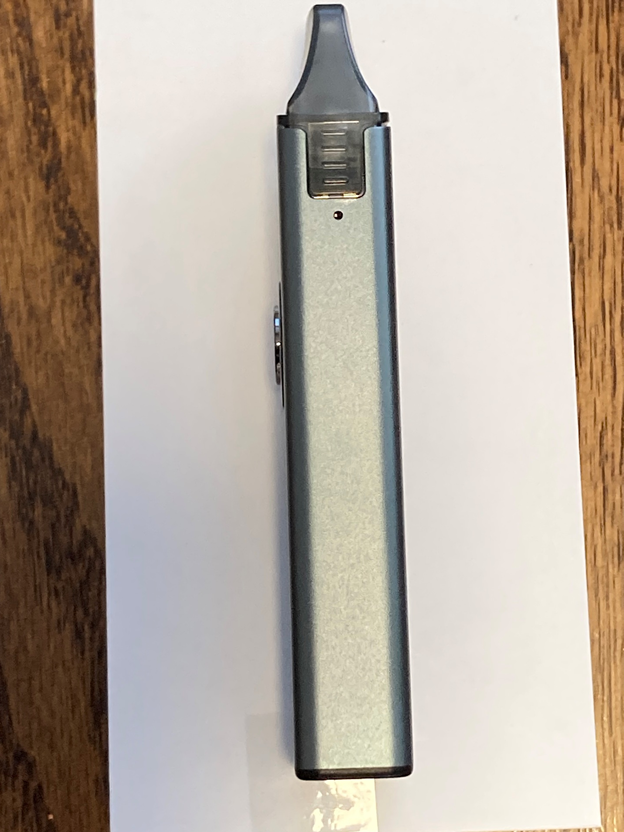 The bottom of the Miso Pro has the 1000mah battery rating on it with the words Made in China and the CE electrical insignia. It is rubberized and can be stood up on a table. It’s a fairly small device like most pod devices like this so it can be fairly easily tipped over. 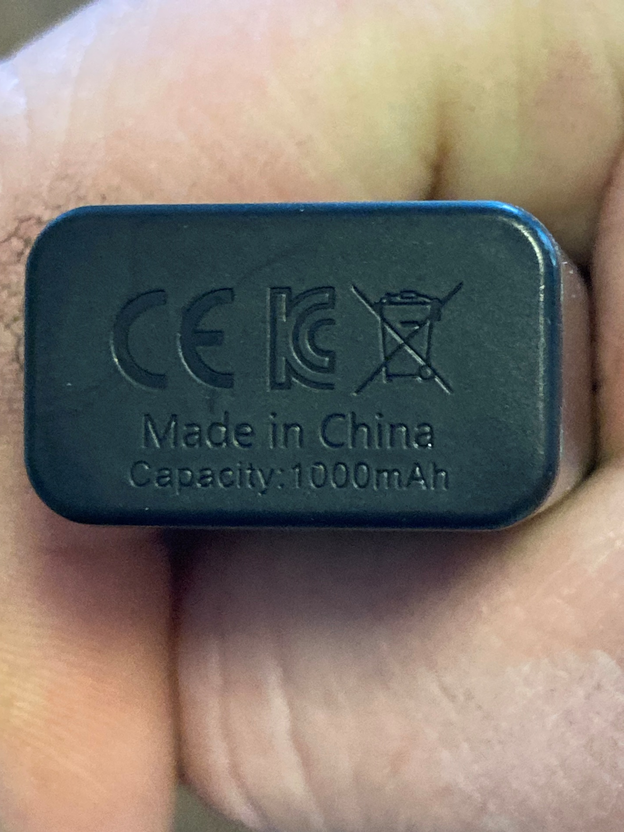 The pod opening on the Miso Pro has two magnets and two gold plated contacts inside as well as the airflow sensor opening in the left corner of my picture. It seems to be a very secure connection and I have had no issue with the pod coming out accidentally. The sensor does sit a little higher than the base of the inside to help protect should a liquid spill happen. There is a notch in one side of the pod and the way it’s supposed to work is that if you put the pod in with that notch closer to the airflow sensor then it’s supposed to be for RDL and if you rotate the pod with the notch further away it’s supposed to be for MTL. I honestly could tell very little difference between inserting the pod either way. 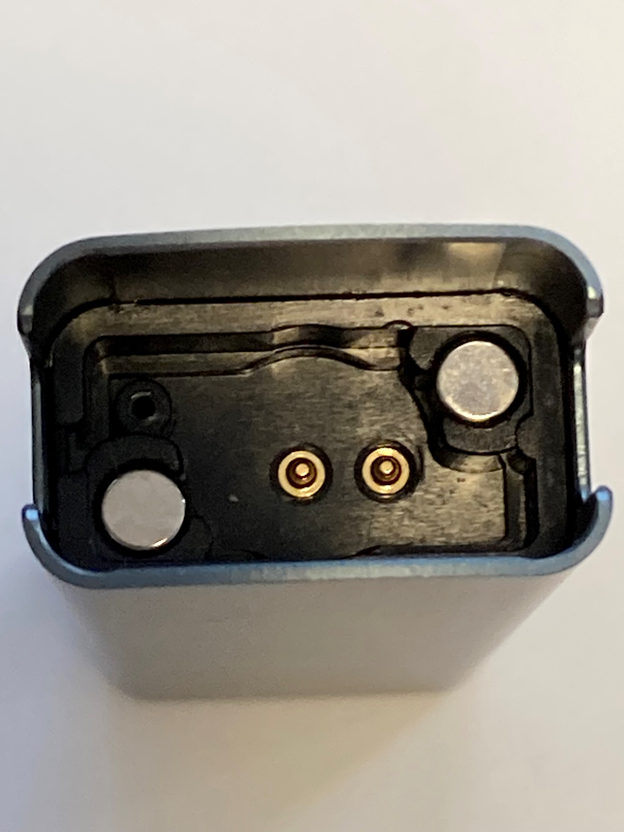 The pod for the Miso Pro is just slightly tinted which makes it fairly easy to see the liquid level while filling.

The coils are threaded on the back end and there is a knurled nut that screws onto them then the entire assembly is threaded into the pod. I’ve seen this type of design before and honestly am not thrilled about it because if you lose that nut then you can’t use the device. The nut has small airflow holes in it to allow the airflow in through the body of the device and then up to the coil.

The Miso Pro is a very simplistic pod device but sometimes simple is better. Do you really need different power levels, screen display, or ten button combinations? Sometimes you just want a good vape and don’t want to mess with all that stuff. Especially if you just want something to throw in a pocket that just works when you need it to. That’s what the Miso Pro is in my opinion.

The flavor production was very good in my opinion for a small pod device. I used some dinner lady lemon tart in it during testing and thought the flavor came through nicely and it delivers plenty of vapor. I did prefer the .8 ohm pod which is rated 13-18 watts but there is the 1.2 ohm pod for those that like a lower output coil at 9-12 watts.

I do wish that the Miso Pro had a real airflow control like some other pod devices I’ve tested before. This being said, I do tend to like an airy MTL and the Miso Pro does have that. I can get an RDL from it with the .8 pod but it’s a bit tight. In my opinion it is just better as a loose MTL device with either coil. I can tell a very small difference depending on which way I insert the pod but never got that tight MTL like some people might look for.

So, would I recommend it for you? If you’re looking for what seems to be a well-built small pod device for out and about that delivers very good flavor with a loose MTL then yes I would. I’d like to thank Univapo for sending the Miso Pro Pod kit for this review and a great big thank you to the readers. Below is a link to the Univapo website if you would like to see the entire line of Univapo products.