Our cigar review of Intemperance Whiskey Rebellion 1794 cigar series from Roma Craft Cigars begins 230 years ago. It was the start of three years of protests spanning 1791 to 1794. At the time, the newly independent government of the United States had just imposed its first federal tax on a domestic product – whiskey. It was one of the first major events that gave exercise to our freedom, specifically, to disagree with our government…loudly if necessary.

In an age of unprecedented government overreach – including taxes – encroaching on the U.S. cigar industry, Whiskey Rebellion 1794’s backstory is as relevant today as it’s ever been. And its resemblance to our ongoing fight to smoke the cigars we love, unimpeded, couldn’t be more striking.

We’ll be smoking and reviewing Roma Craft Intemperance Whiskey Rebellion 1794 cigars in the Sovereign size, a 5” x 50 Robusto, and giving our opinions on flavors, strength, and what kind of smoker we think would most enjoy the blend. Check out the reviews and leave yours in the comments below!

Summary: The exposed foot burns a little raw and peaty; but when the wrapper starts to burn, it really shines up the profile: it adds sweetness and earth. And with the full blend burning together, now your taste buds can tell you that “this is woody” or “this is pepper.” It’s a neat experiment.

Whiskey Rebellion seems to put one flavor very prominently forward at a time. First, it’s brown sugar; when it’s not sweet, you sense coffee bean. Then it’s tangy, especially in the second half. 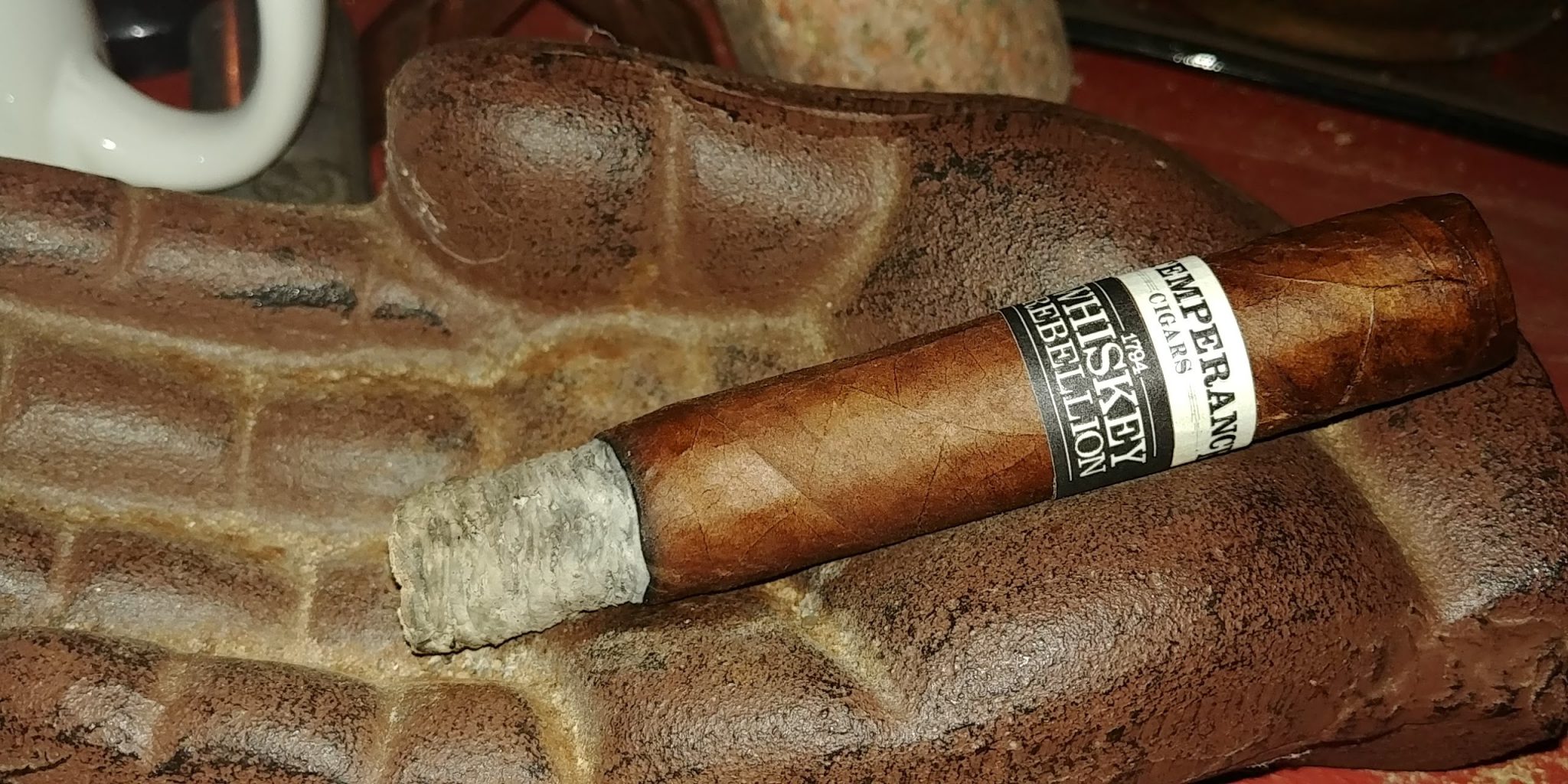 I looked at my notes from 5 years ago, when we reviewed the Rothschild size of this cigar. The pre-light still had the same dark chocolate sweetness, the shaggy foot had a charred wood taste, and the thick smoke was earthy and tangy. It’s all still there – so RoMa scores points for consistency.

Full body cigar guys will like this cigar a lot (or probably love it); same for RoMa Craft cigar fans. And if you like what you hear about flavor, give it a try and see if you like where the Intemperance Whiskey Rebellion takes your taste buds. I think it was Paul who called it approachable, and he’s right: even though this rich and slow-burning Intemperance is full body, it’s definitely not aggressive or strong. Go slow like I did, and I think you’ll get a full appreciation for it.

Construction: Well-rolled with some tooth and a few visible veins. Cap construction is excellent with three turns, no unraveling.
Draw: Very nice, smooth draw throughout.
Pre-light flavor: Leathery and spicy with a distinct barnyard aroma.
Toasting & Light: Easy to light with the exposed binder on the foot, with a unique earthy-wood flavor until the burn line catches up to the wrapper.
Base flavors: Very earthy, a pinch of baking chocolate, and a citrusy element on the finish. Also, a smoky, BBQ-like flavor at times.
Retrohale: The pepper is crisp, a little sweet, and a lot more earthy.
Aroma: Kind of meaty in a way, but more along the lines of spicy.
Burn & Ash Quality: Some burn deviation here and there, which is expected from a Ligero wrapper. Ash looks like a stack of nickels.

Summary: Sorry I didn’t make it to the video shoot, but I’ll air my opinion here. Overall, I was impressed. Roma’s Whiskey Rebellion is a beefy cigar in terms of the richness of its flavor and smoke density. And it’ll surely appeal to contemporary smokers who gravitate toward ‘craft’ cigars and their propensity for pepper and spice. But if it were an IPA, it wouldn’t be all hops. There are layers of flavor underneath that command your attention: earth, wood, baking cocoa, spices, and of course, that pepper I was talking about. The fact that this blend dishes complexity is probably an understatement, and if it would lose any points from me, maybe it’d be for the lack of consistency at any given moment. However – if you love cigars that give you something new from every puff, this might be your next go-to daily, especially at its affordable price point. 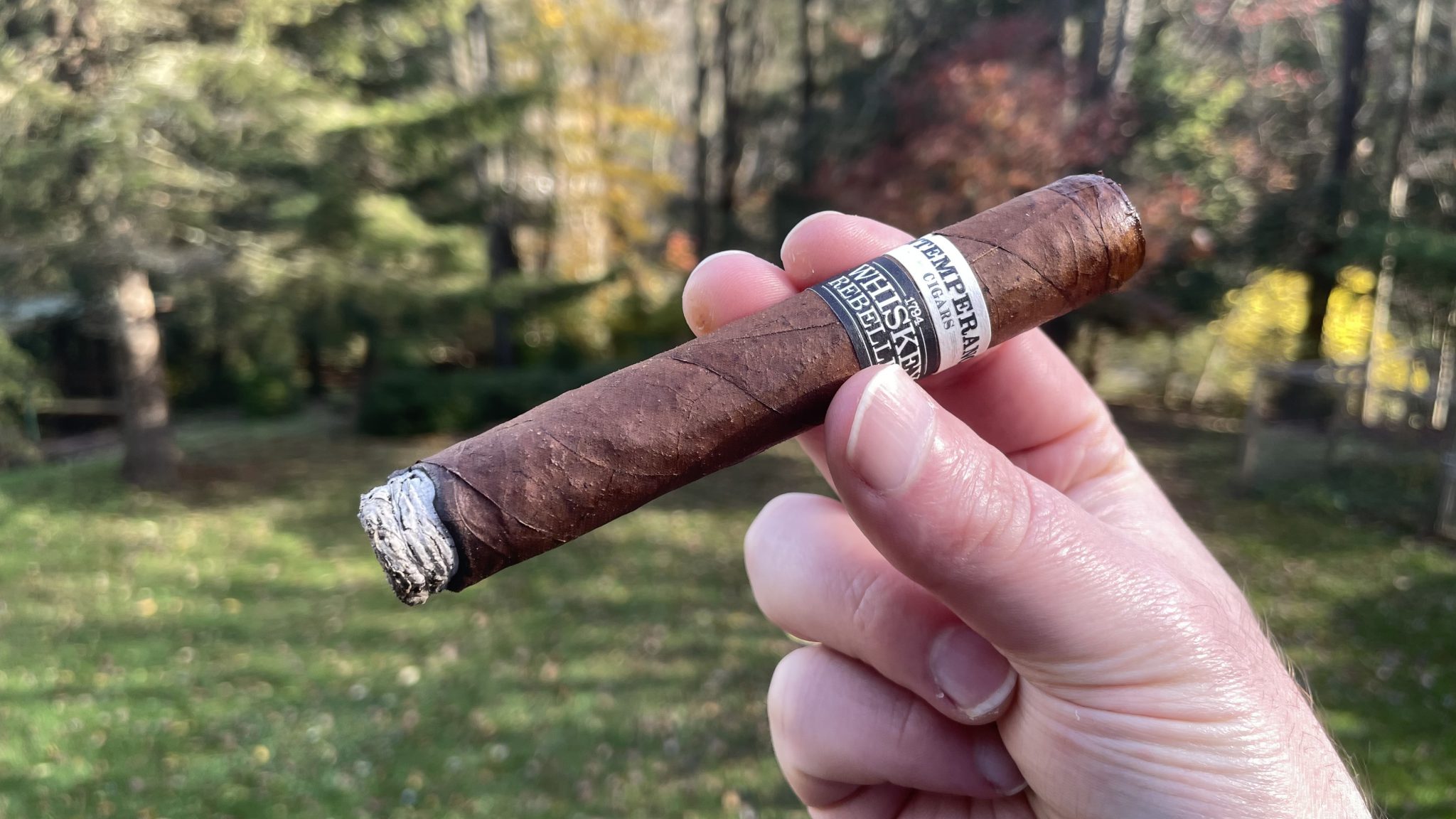 I’d give this a go after-dinner, maybe even a night cap, but probably not any earlier. You might want to pair it with something sweeter like bourbon because even though it’s got a lot of natural tobacco sweetness, it’s a lighter sweetness that sits in the background. Worth a burn in my opinion, check it out and lemme know if you agree!

Summary: I’ve had and enjoyed the Intemperance Whiskey Rebellion (WR) in other vitolas in the past and I was looking forward to taking the 5×50 Sovereign for a spin. This cigar draws its name and its inspiration from the uprising that occurred when the new U.S. government placed the first tax on a domestic product (to pay off Revolutionary War debt). While the uprising was initially unsuccessful, the whiskey tax was ultimately repealed in 1802 proving that resistance to unfair taxation is not futile—a lesson we as American cigar enthusiasts need to take to heart. Now, back to the cigar.

The WR Sovereign has a rustic appearance and is well packed—it felt firm and substantial in my hand. The cigar features a triple cap and an unfinished—or shaggy—foot. I noticed this as I lit the cigar and got an immediate, dominant wood note from the exposed Indonesian Besuki binder and long filler tobacco from the Dominican Republic and Nicaragua. Once the Ecuador Habano Ligero wrapper starts burning, the flavor profile becomes fuller and more balanced. 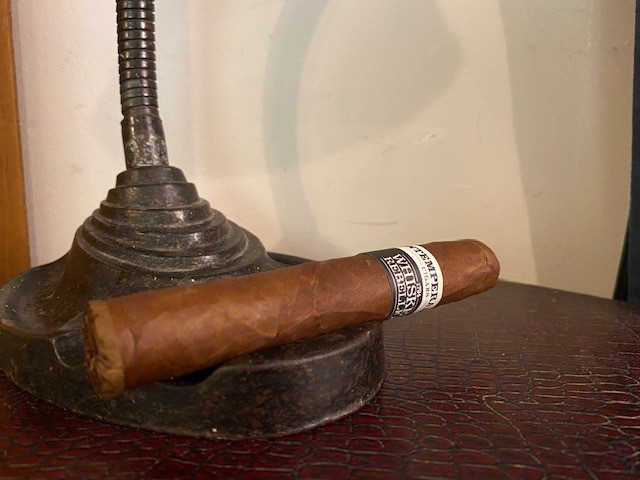 The WR Sovereign really gets going with notes of red pepper, chocolate, espresso, cedar, and a raisin-like sweetness. The flavor profile is balanced and complementary and reminds me of a top-shelf Nicaraguan cigar (although the WR Sovereign isn’t a puro). The strength is medium plus and gets more full-bodied towards the final third.

Two things stood out to me about the WR Sovereign: its approachability and affordability. The Intemperance WR Sovereign is a great choice for someone looking to experience a fuller bodied cigar without jumping into the deep end of the pool. And it’s priced comfortably under $10.00 a cigar, placing it in the category of a great bang for your buck blend.

Construction: Very well made. The wrapper has an oily, brick red sheen. The cap is perfectly applied, and I like the exposed binder at the foot that gives it a semi-shaggy appearance.
Draw: Firm, but not obstructive.
Pre-light flavor: Fruity with a bit of cocoa.
Toasting & Light: Fairly easy. The first few puffs had a more spicy than peppery taste.
Base flavors: Earth, spice, nutmeg, and fig, with black pepper on the finish.
Retrohale: N/A
Aroma: The wrapper was musty, while the foot had a raisiny sweet aroma, and the smoke itself reminded me of those Spice Drops candies.
Burn & Ash Quality: Very good. Mostly even, revealing a firm, grey, nickel stacked ash.

Summary: I found the Intemperance Whiskey Rebellion 1794 Sovereign impressively smooth and creamy all the way through to the nub. It started off with a medium-bodied and earthy mix of dried fruit and sweet tobacco. Well-balanced flavors of baking spices, nutmeg, fig, and black pepper followed. I also found the smoke very “Nicaraguan” in character. The flavors remained fairly consistent into the last several inches while the strength and spicy finish increased a little. Also impressive was the Ecuador Habano Ligero wrapper that added more flavor than strength. 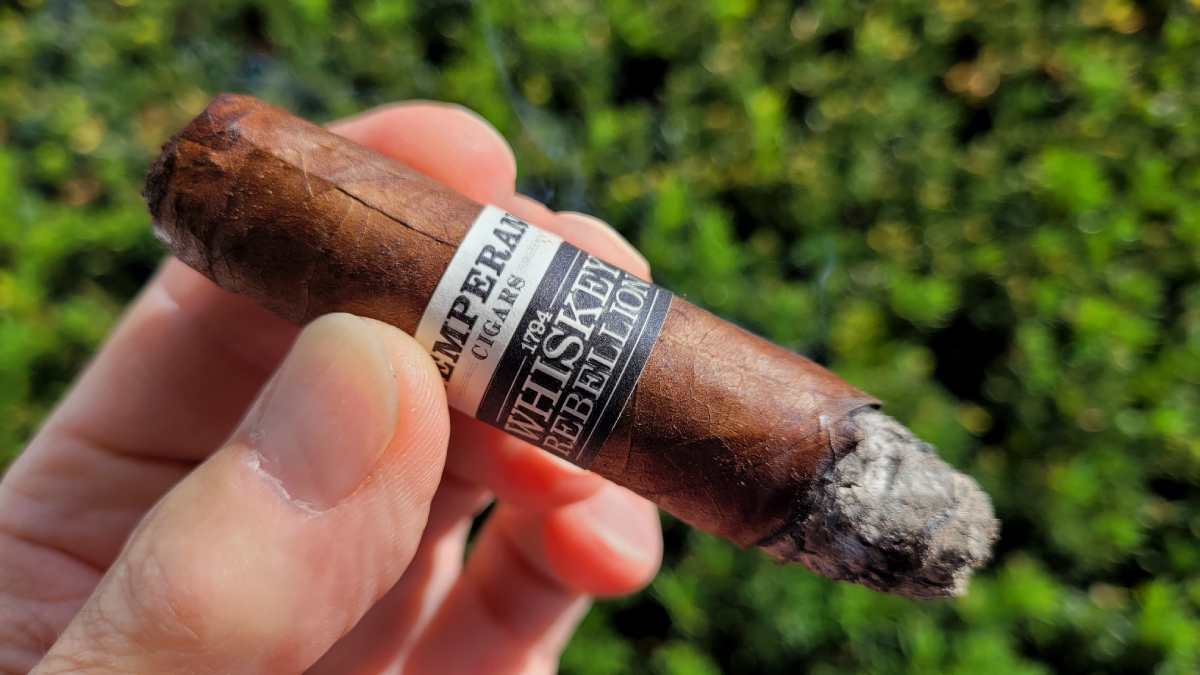 Although I found the body and strength mostly medium-plus, I also noticed that this cigar could get a little heady if smoked too quickly. This is a cigar that you really want to savor to get the full effect, and I would even encourage newer cigar smokers to give this Robusto a whirl. I think the Sovereign comes with a respectable amount of refinement and would make a gratifying after dinner cigar with a good bourbon or rye.

Suffice it to say… Considering all this cigar has to offer, the Intemperance Whiskey Rebellion 1794 Sovereign comes at a very reasonable price, and that Ecuador Habano Ligero wrapper is a nice savory surprise, which is also why I’m recommending it.