Hello everyone. I’m here today with my very first review for OXVA. I am fairly new and inexperienced when it comes to OXVA devices. My sole OXVA item that I owned before now was the Arbiter Solo. I was sent the OXVA Arbiter 2 for the purpose of providing a fair and honest review. The Arbiter 2 uses some really innovative design features as far as airflow design which in turn helps to provide exceptional flavor. 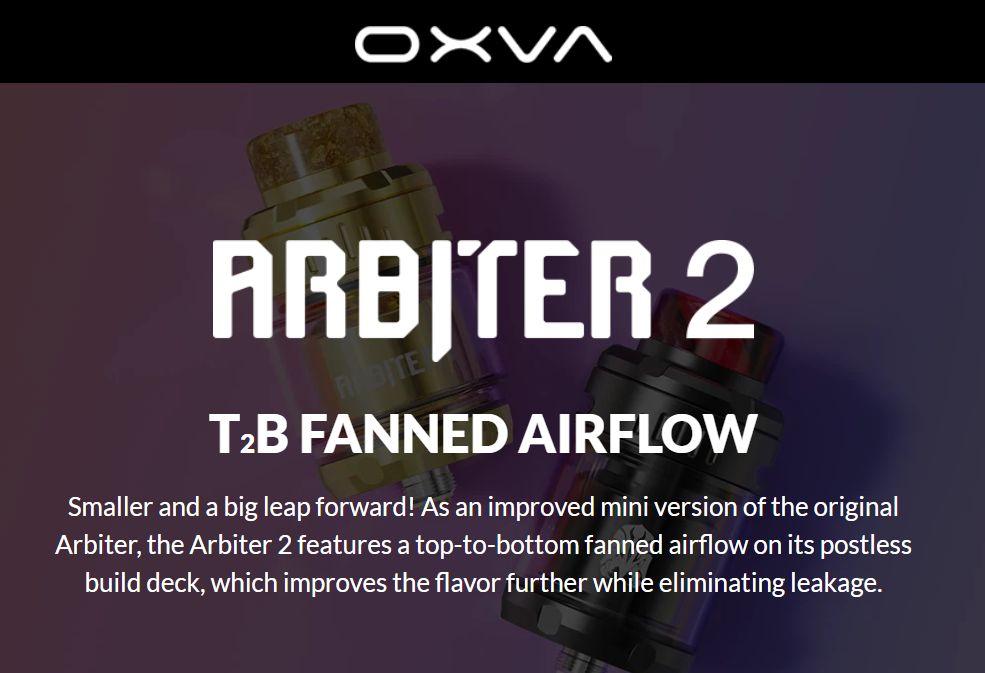 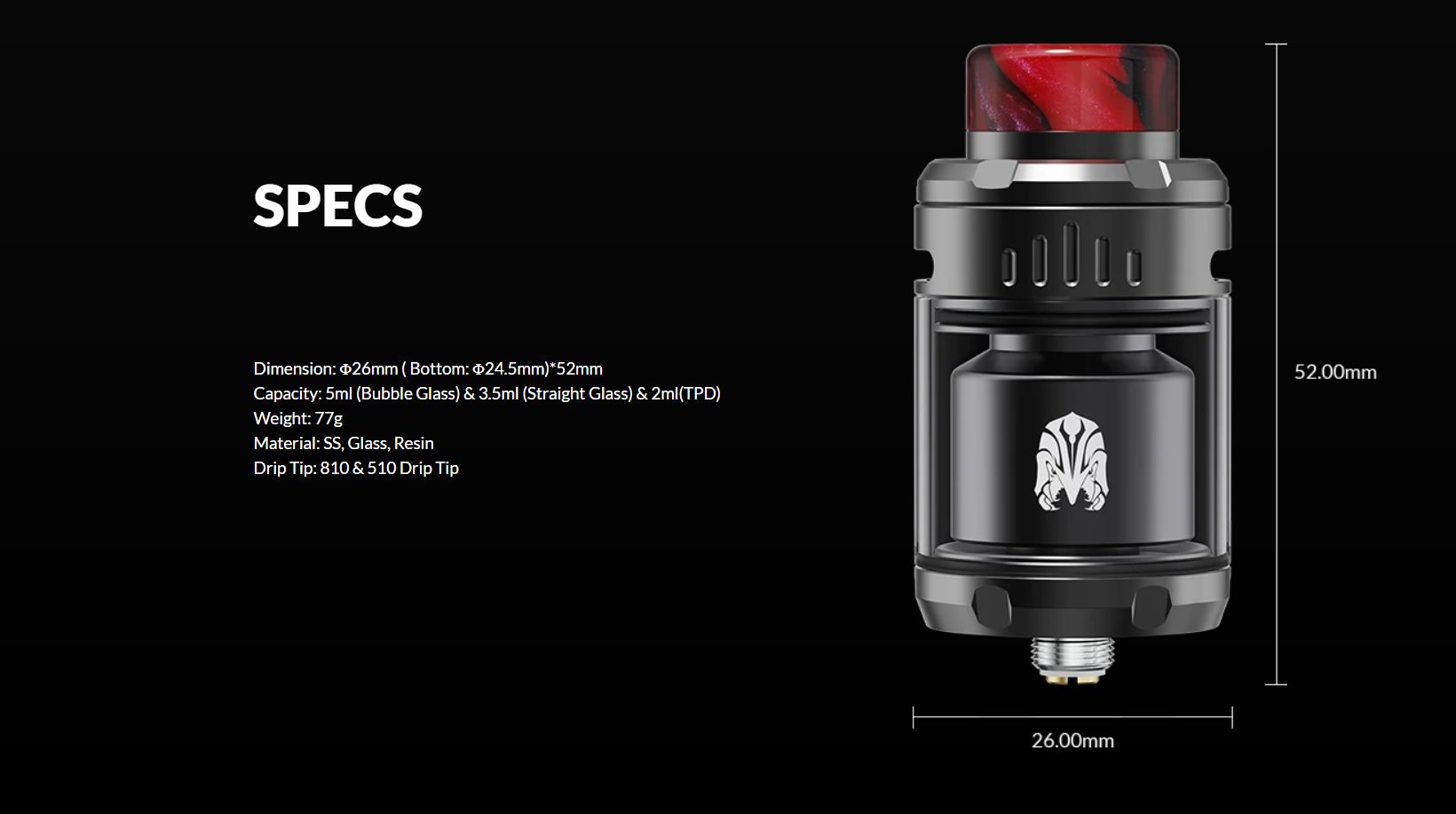 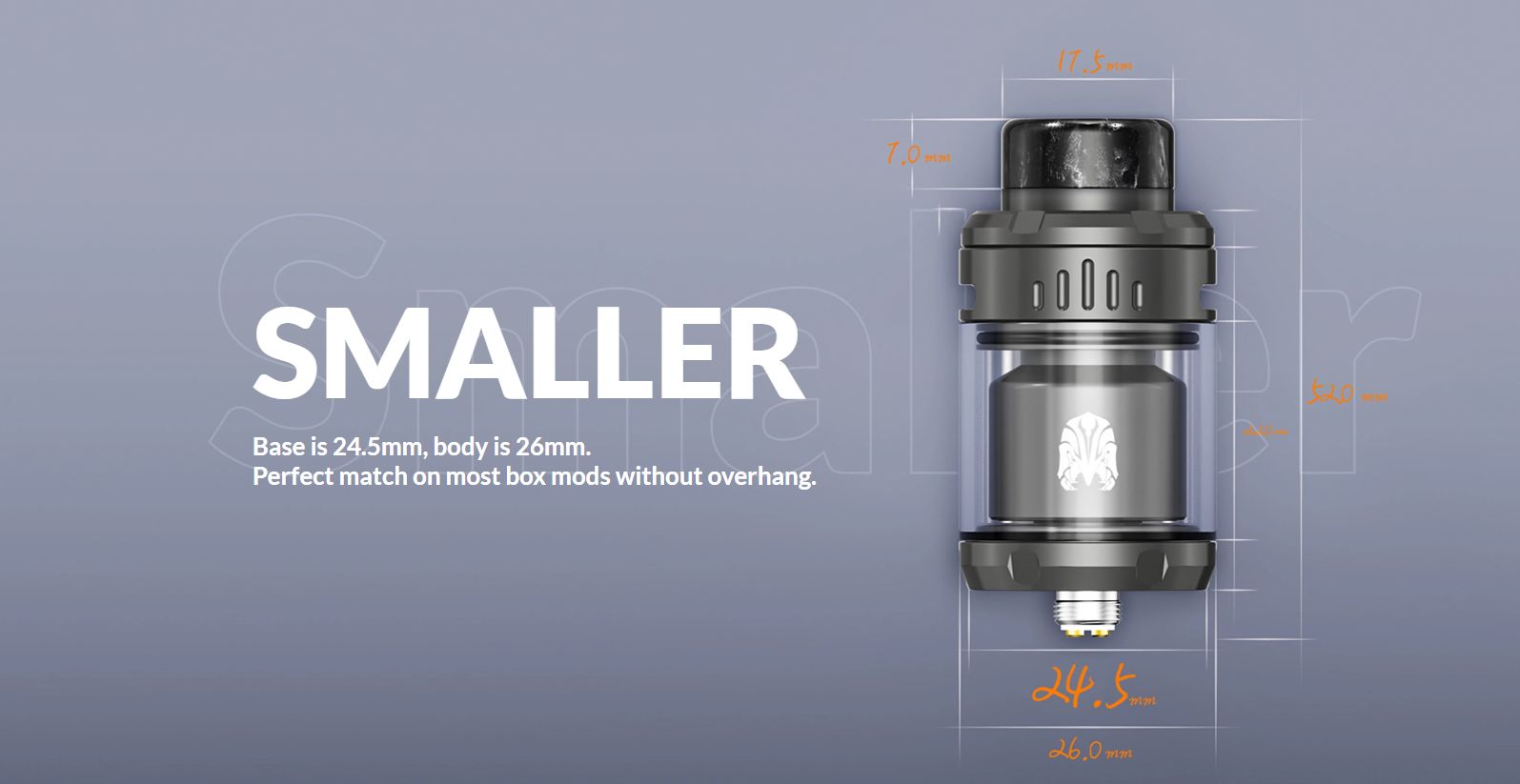 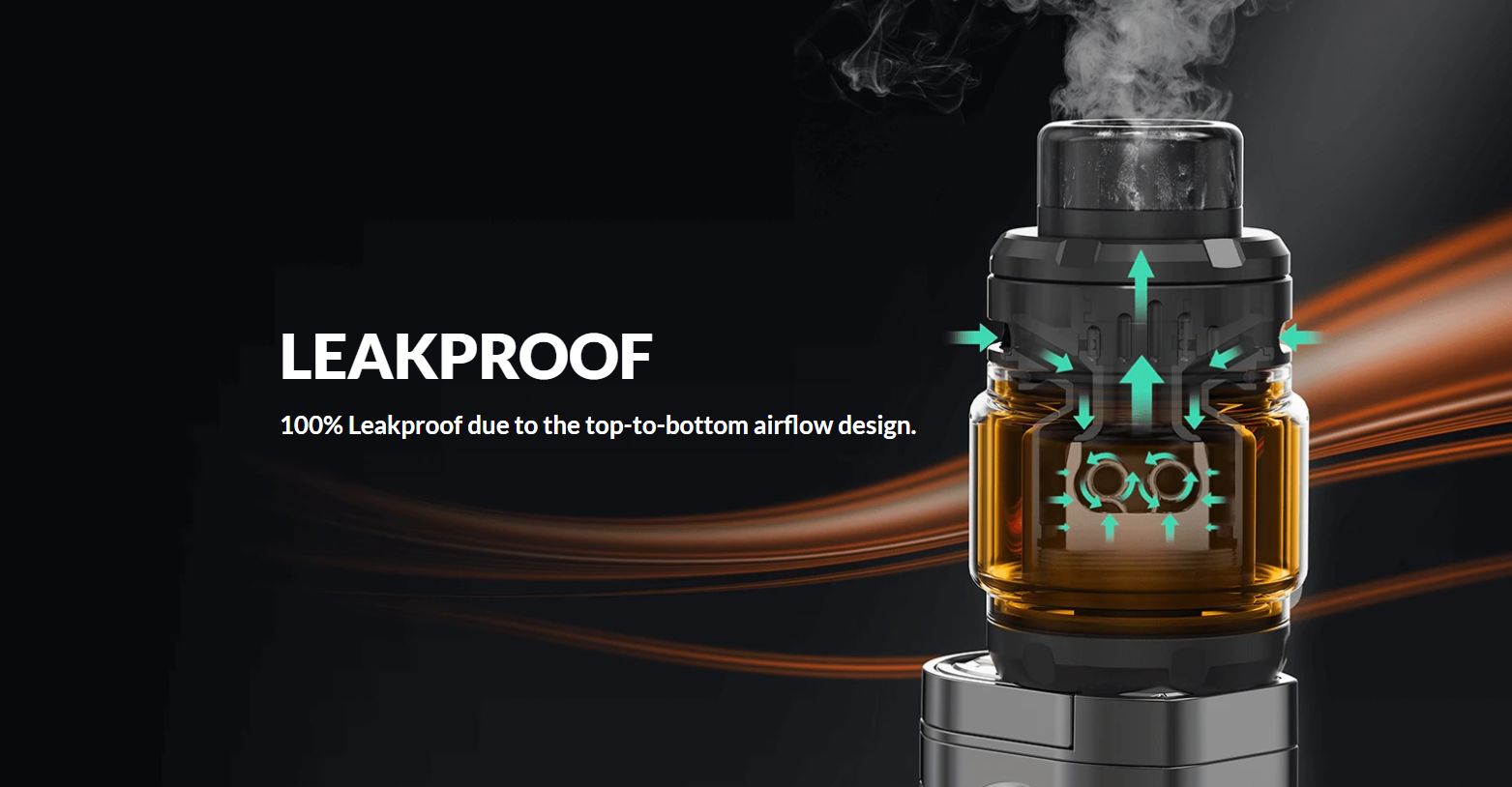 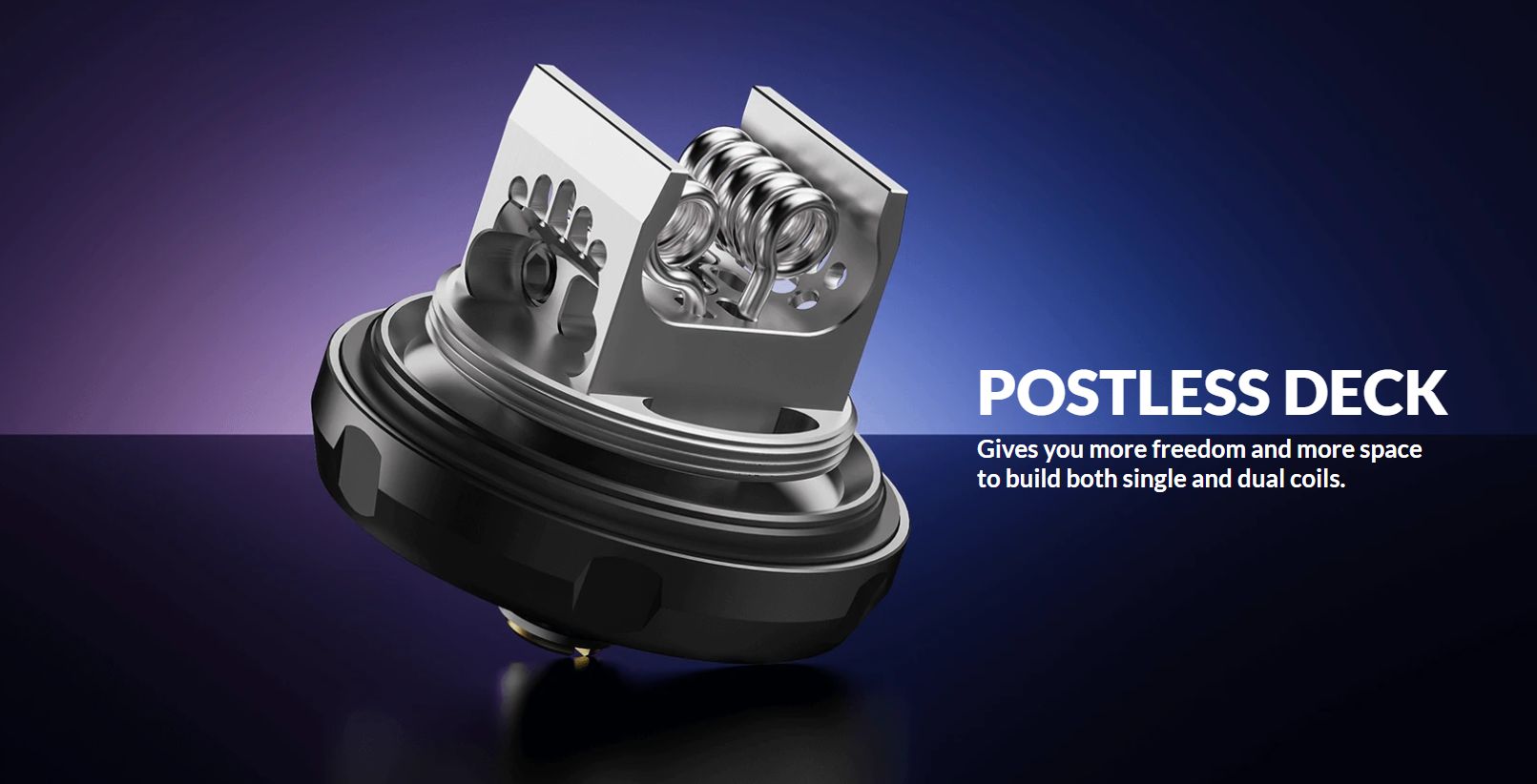 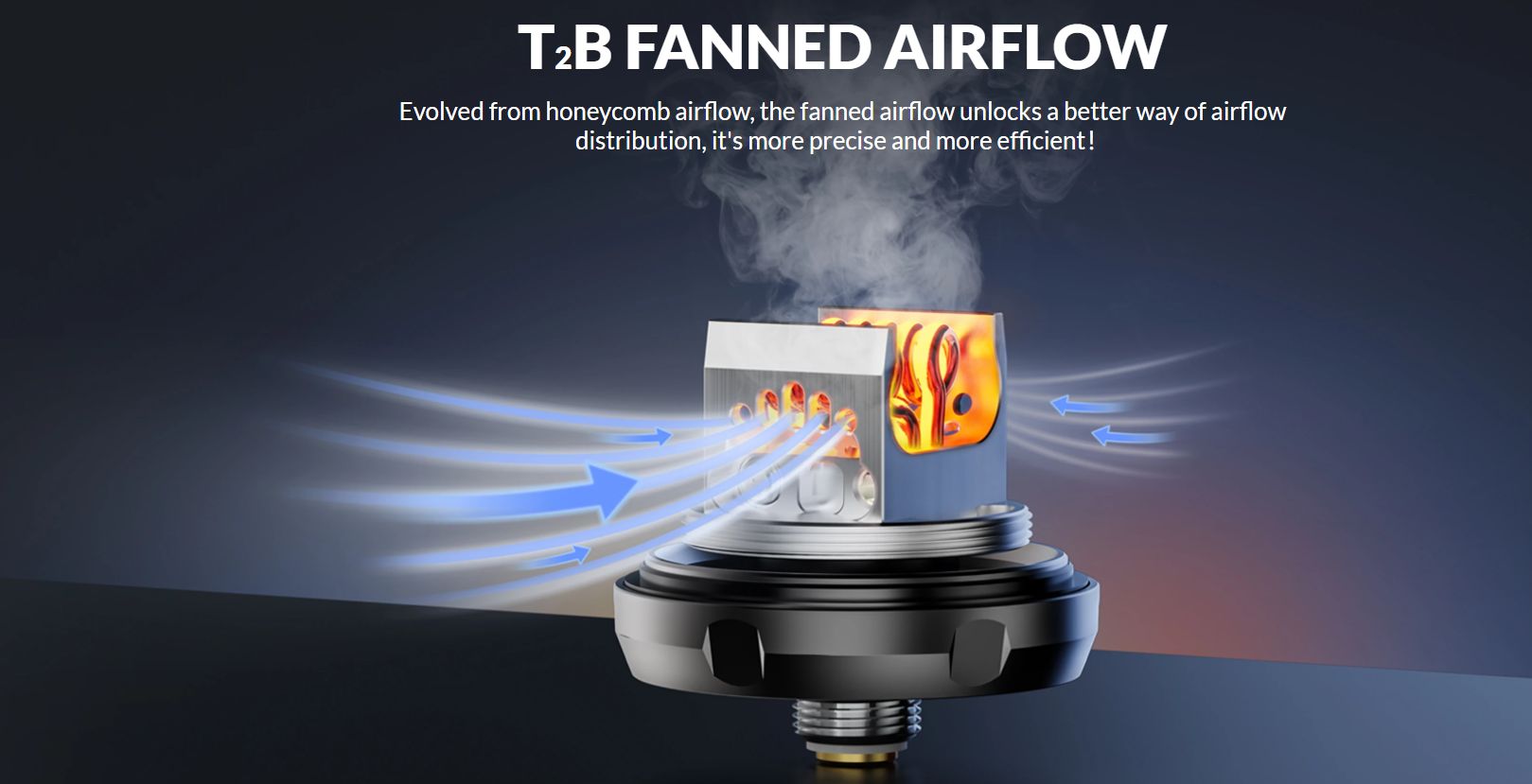 The packaging for the Arbiter 2 has a very nice color picture of a black version of the tank on the front of the outer sleeve. However, I received the gunmetal version for the review so I guess one image is used for all packaging. In case you don’t know, Justin Lai is the designer for OXVA and as far as I know is credited for most if not all of their designs. His name is on the side panel of the outer cover.

On the rear of the outer cover is a brief description of the Arbiter 2 as well as a list of contents, a scratch and check authenticity panel, and contact information for OXVA.

Once the outer sleeve is removed, you will find the Arbiter 2 rta and a spare straight glass in a foam insert as well as two 3mm .4 ohm Ni80 coils, two cotton threads, user manual, warranty card, and a spare parts bag that contains extra grub screws, o rings, an allen wrench, and a 510 drip tip adapter which I’m assuming is meant to be used when using the Arbiter 2 with a single coil configuration or perhaps for those that just like a little tighter draw. 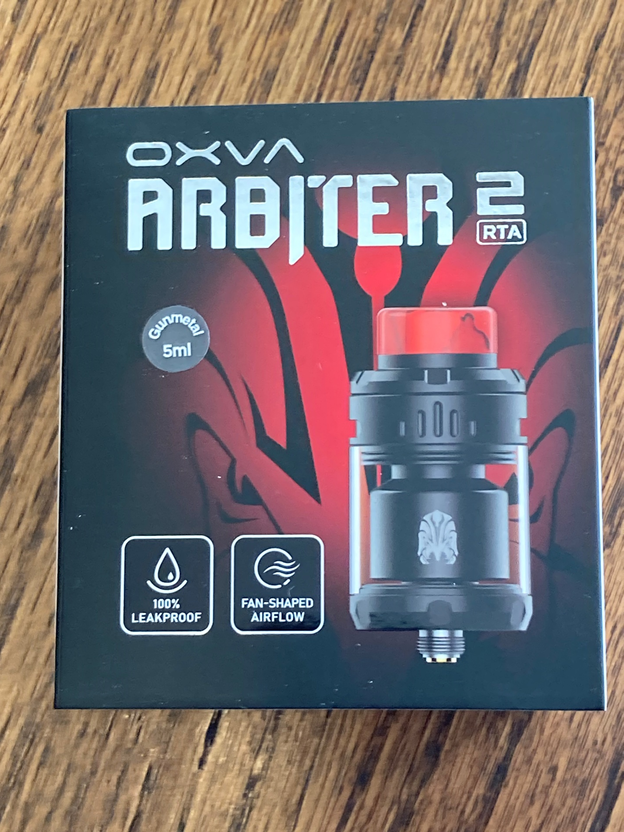 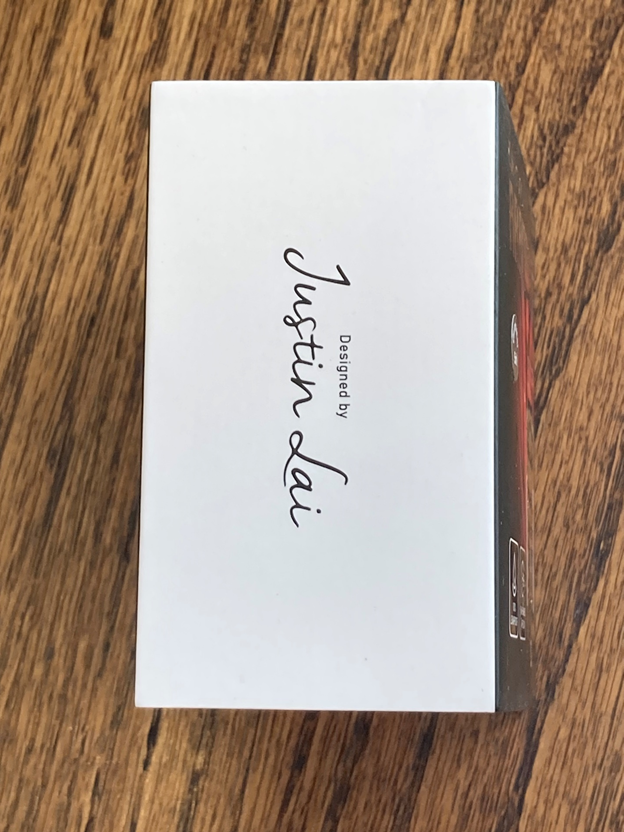 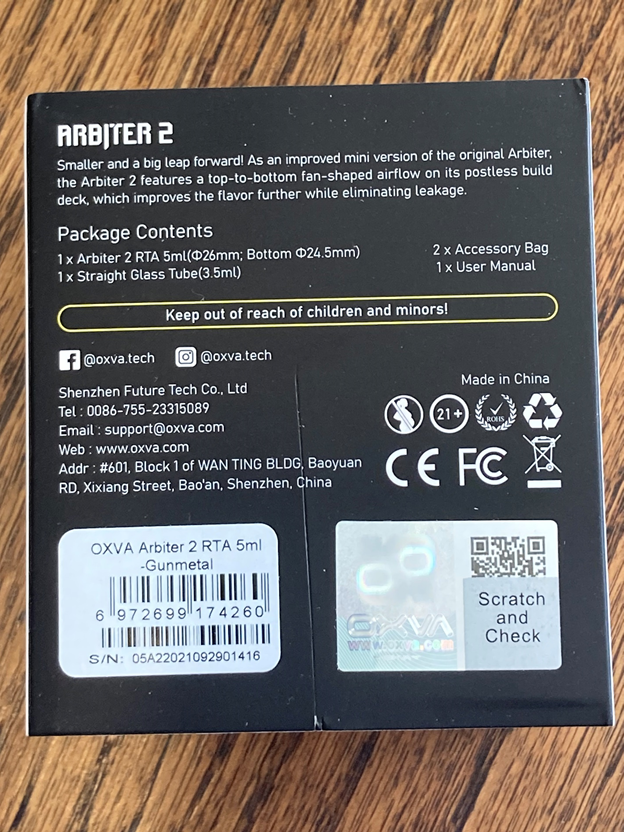 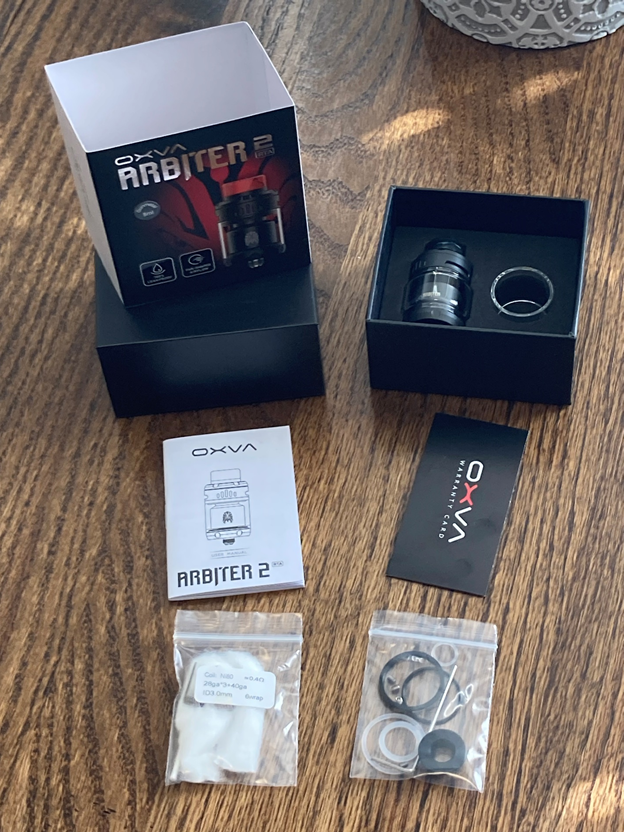 As I had mentioned in the beginning, I don’t have much experience with OXVA devices but had high hopes after hearing much about the Arbiter 2 and very much liking the Arbiter Solo. One thing I noticed immediately when looking at the tank was the swirled 810 drip tip. To me, that tells me that the manufacturer has paid a little extra attention to detail to make their product stand out. 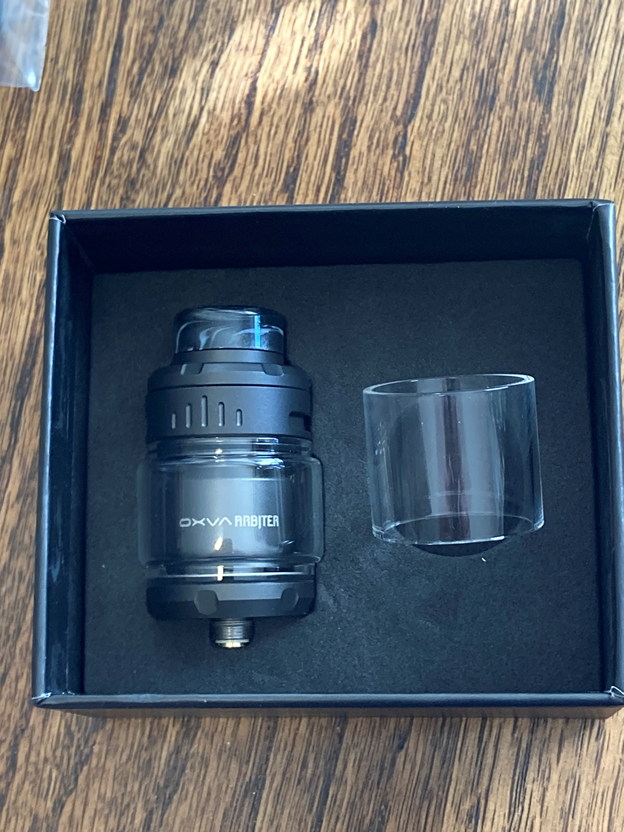 The Arbiter 2 is easily disassembled to completely clean. It comes with the bubble glass pre-installed which I prefer but at this point you can also switch to the straight glass if you so desire. 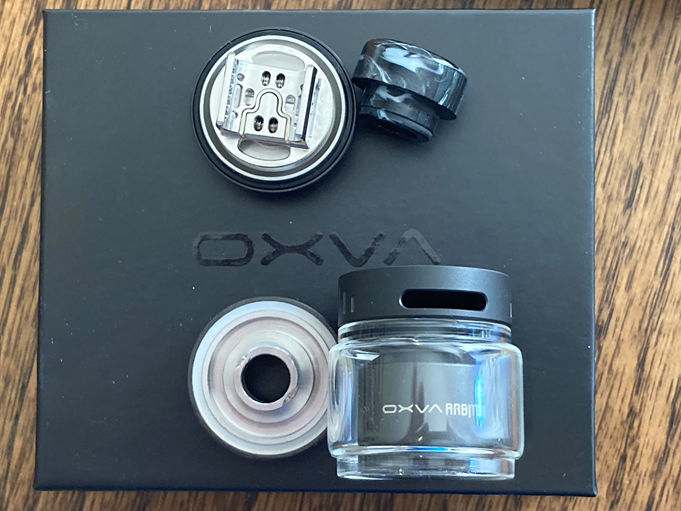 I like that there are notches cut in the base as well as the top cap. The top cap has a black o ring inside and there is not an o ring on the drip tip. I’ve been seeing more and more of this the more tanks I review. Honestly, it doesn’t really matter to me as long as the drip tip stays seated and in place. 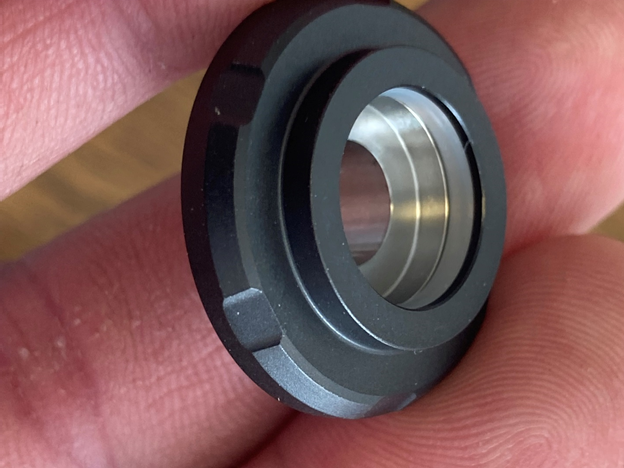 The deck design on the Arbiter 2 is the claim to fame on this tank. The raised sides of the deck have five different sized holes on the top and three more holes underneath to create the top to bottom FAN airflow which provides airflow around the coils for very good flavor production. The airflow comes in from the top airflow holes, goes down and comes through the sides with the holes as well as two airflow holes underneath the coils to circulate the airflow around the coils. In my opinion, this is a very ingenious design. 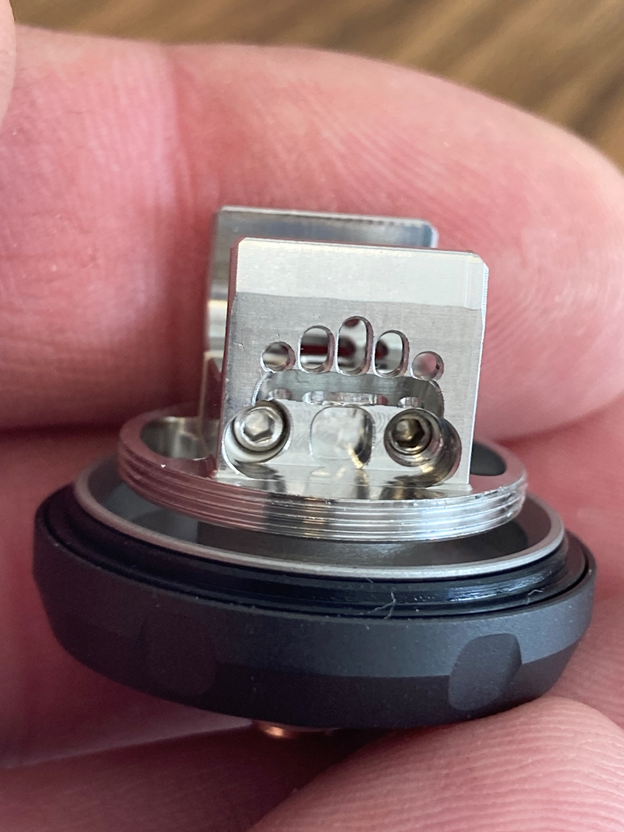 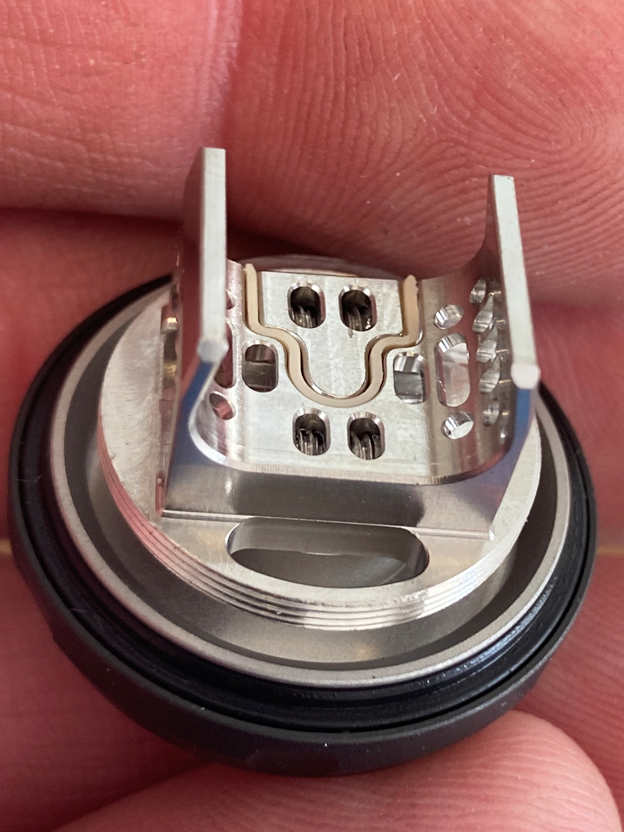 Another well designed feature in my opinion is the UN.DETACHABLE airflow chamber that stays inside the main body instead of being removable like I have seen in one or two other tanks by different manufacturers. 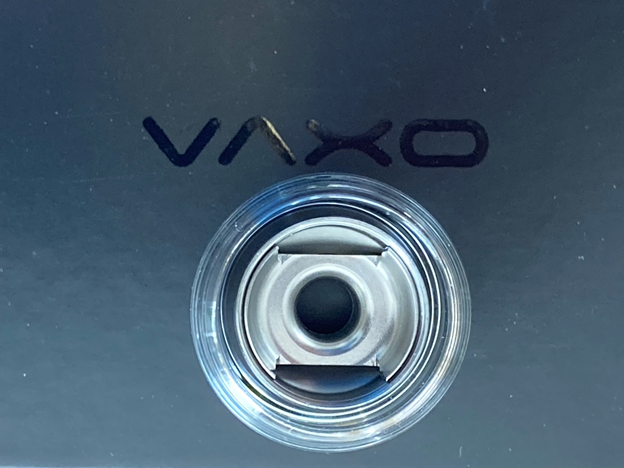 Once the top cap is removed, underneath are two very nice sized liquid fill ports that will accommodate most bottles used for filling the tank. 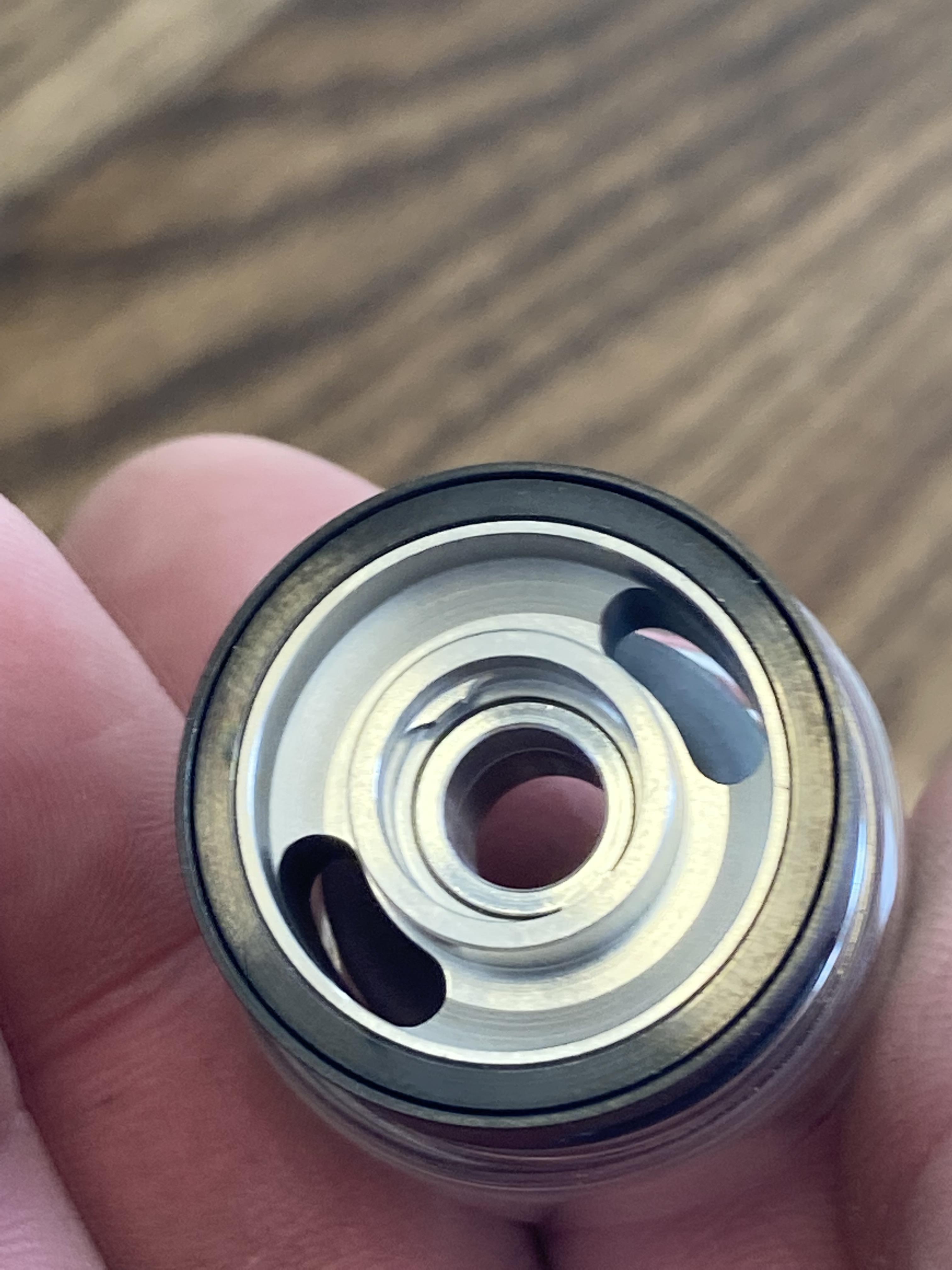 The Arbiter 2 has two very large airflow intake holes in the top that should be plenty of airflow for just about anyone. Myself, I ran it at about 1/3 open with the watts set at 55 watts. I don’t really like a hot or very warm vapor so that was a good fit for me.

The outer barrel of the tank has the OXVA emblem on one side and the OXVA Arbiter name on the other side.

The bottom cap has the Arbiter 2 name on it and Justin Lai. The gold plated center pin does protrude some which I am told is good for mechanical mods. I have very little experience with mechanical mods so couldn’t really say that for sure. 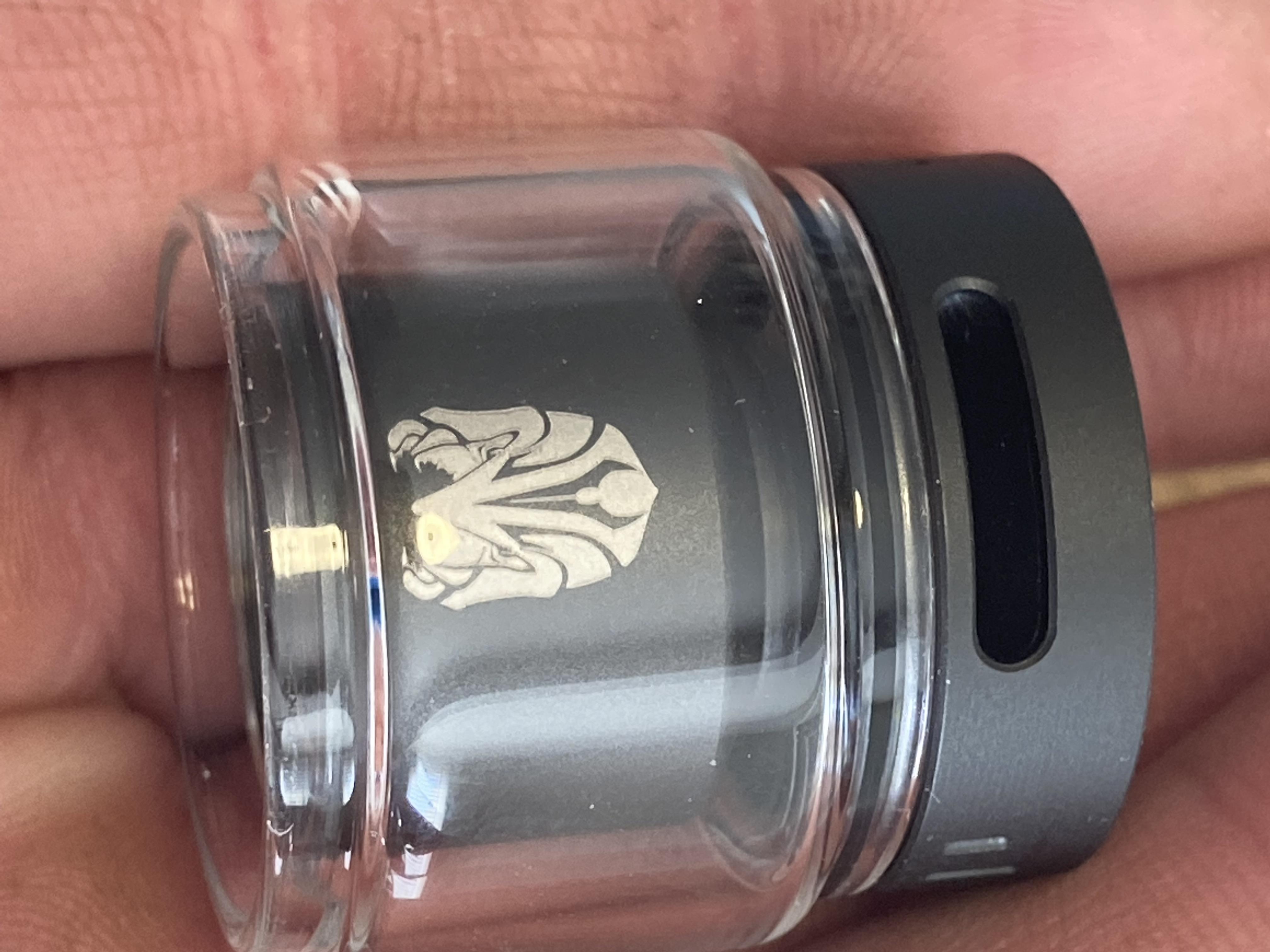 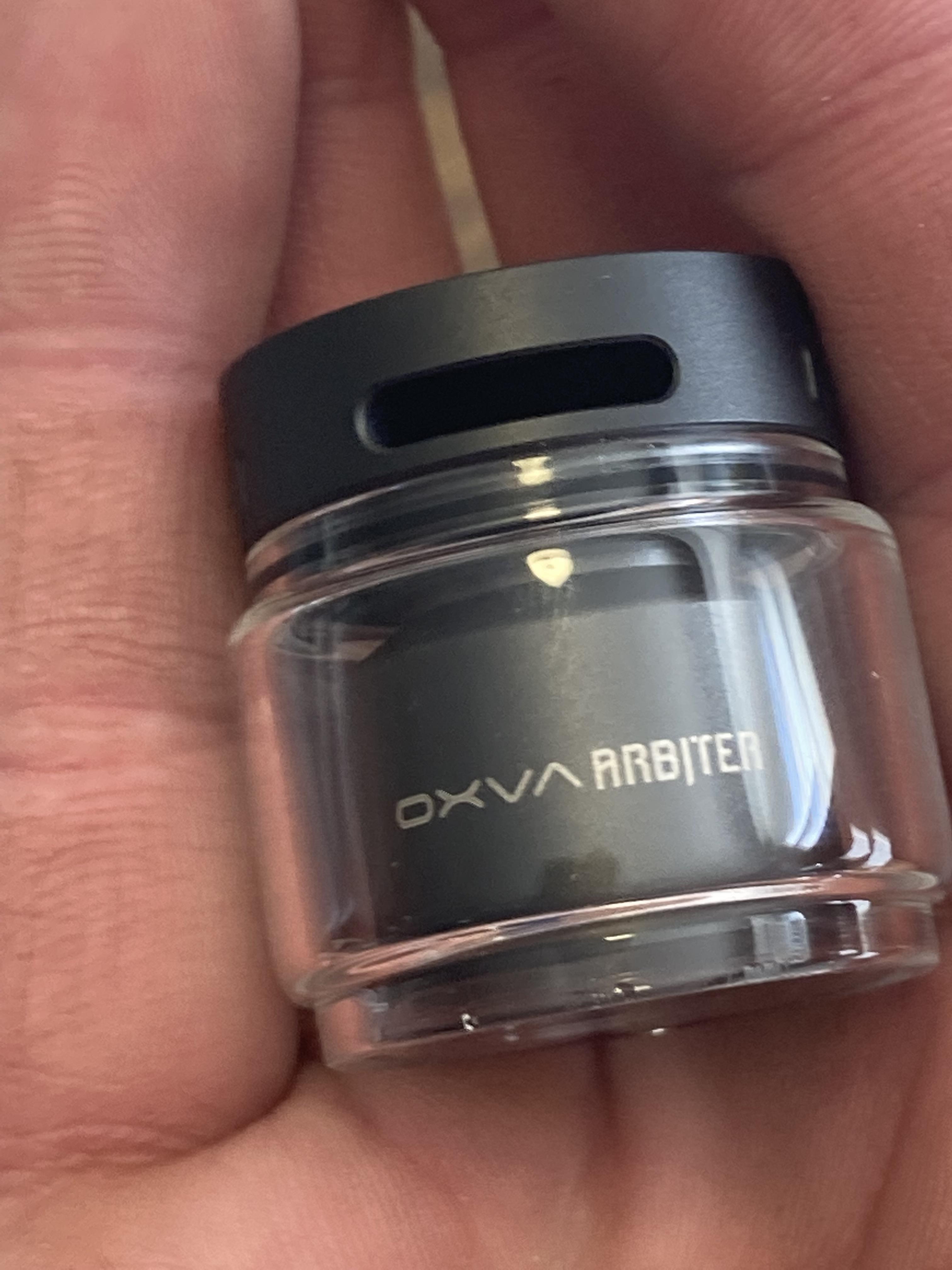 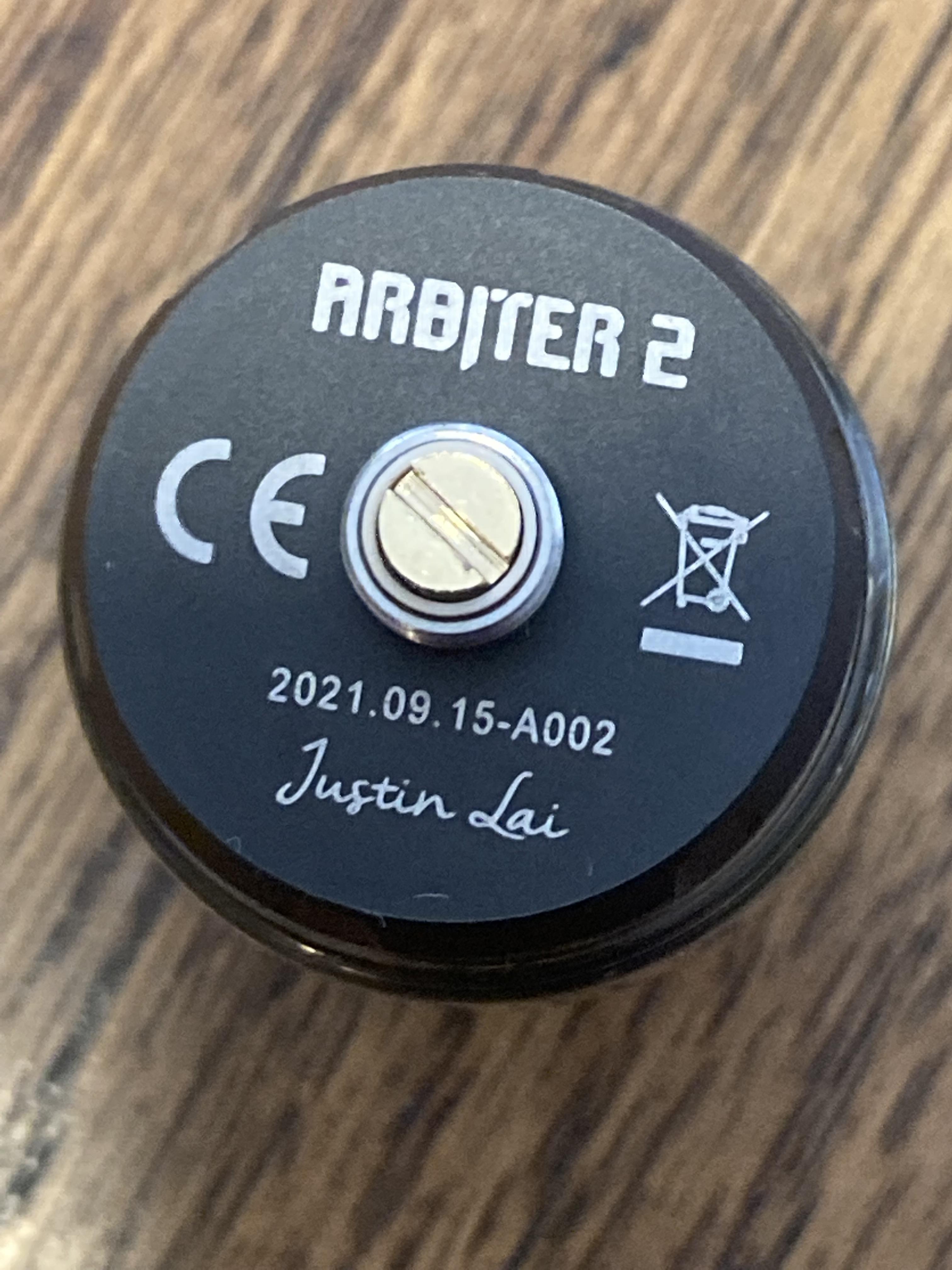 I built the tank using the two included .4 ohm 3mm Ni80 coils which once installed read .17 ohms on my Riva 200. I trimmed both coils to 4.5mm in length and found that to be about right but feel like you could go up or down a little and still have a good fit. I very much like that the grub screws are allen wrench heads instead of flat head slotted like many tanks I’ve tried lately. One other thing that I noticed when installing the coils that I thought was nice was that the grub screws once loosened to insert the coils were still inside the opening instead of sticking out of the body. It might sound silly but being still inside the threading, it makes it very easy to insert the allen wrench and get it to fit instead of having to look and align the wrench when the screws are sticking out. It’s not as bad with allen screws as it is when flat slotted screws are used. This could also be just me getting older and not having as good of eyesight as I used to but this little feature is appreciated.

Once the coils were installed, straightened, and dry burned to get out any hot spots, I was able to use one of the included cotton threads to wick both coils. I mentioned this in another review but in case you didn’t read that one then I’ll mention it again. With the included cotton threads, if you pull it all the way through and trim it at the end then you can leave the eyelet on the left over wick and it makes it easier to thread through the second coil. I don’t know about you but I like easy. Also, that leaves a second cotton thread for another wick at a later time when it’s needed. 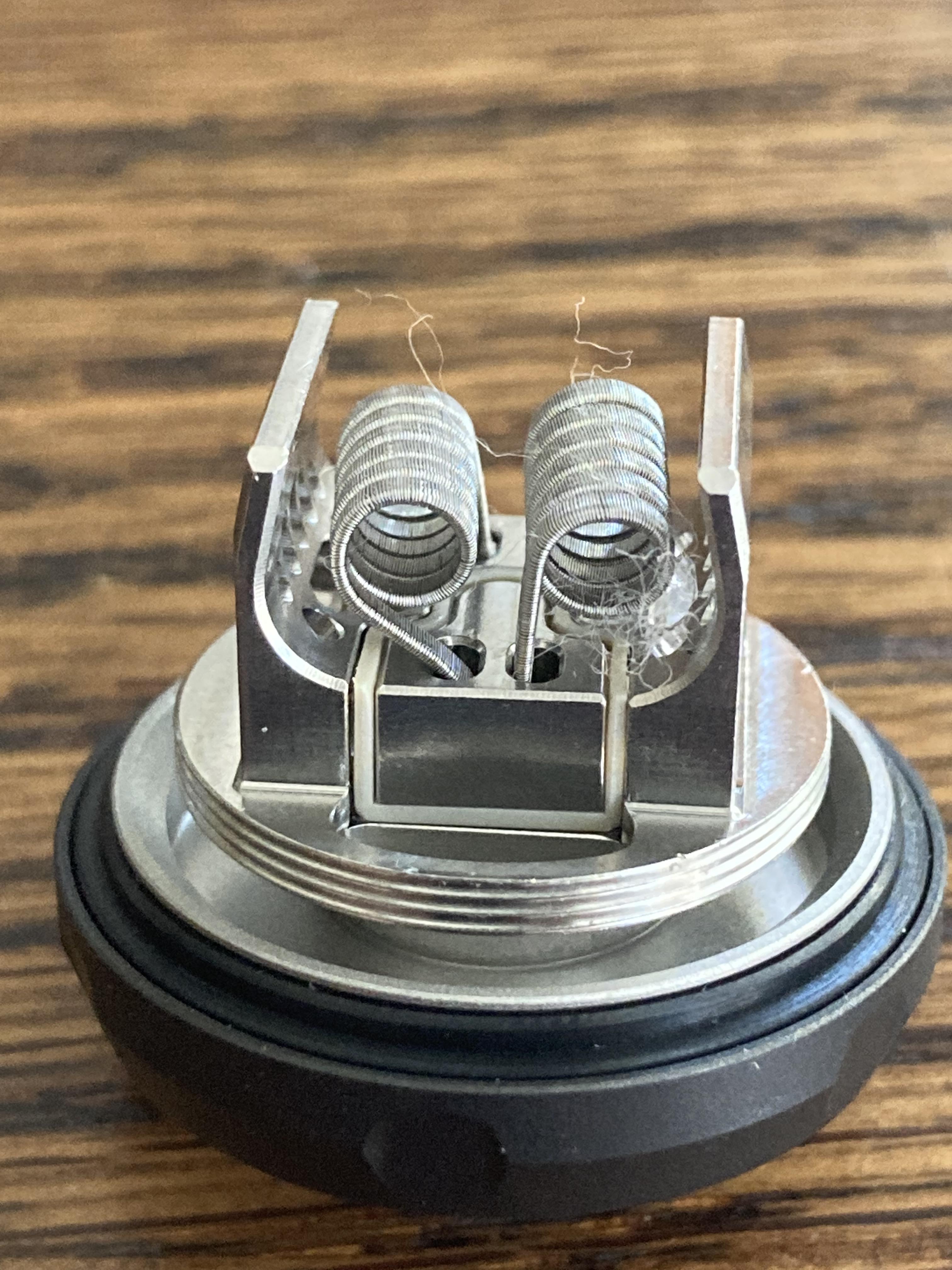 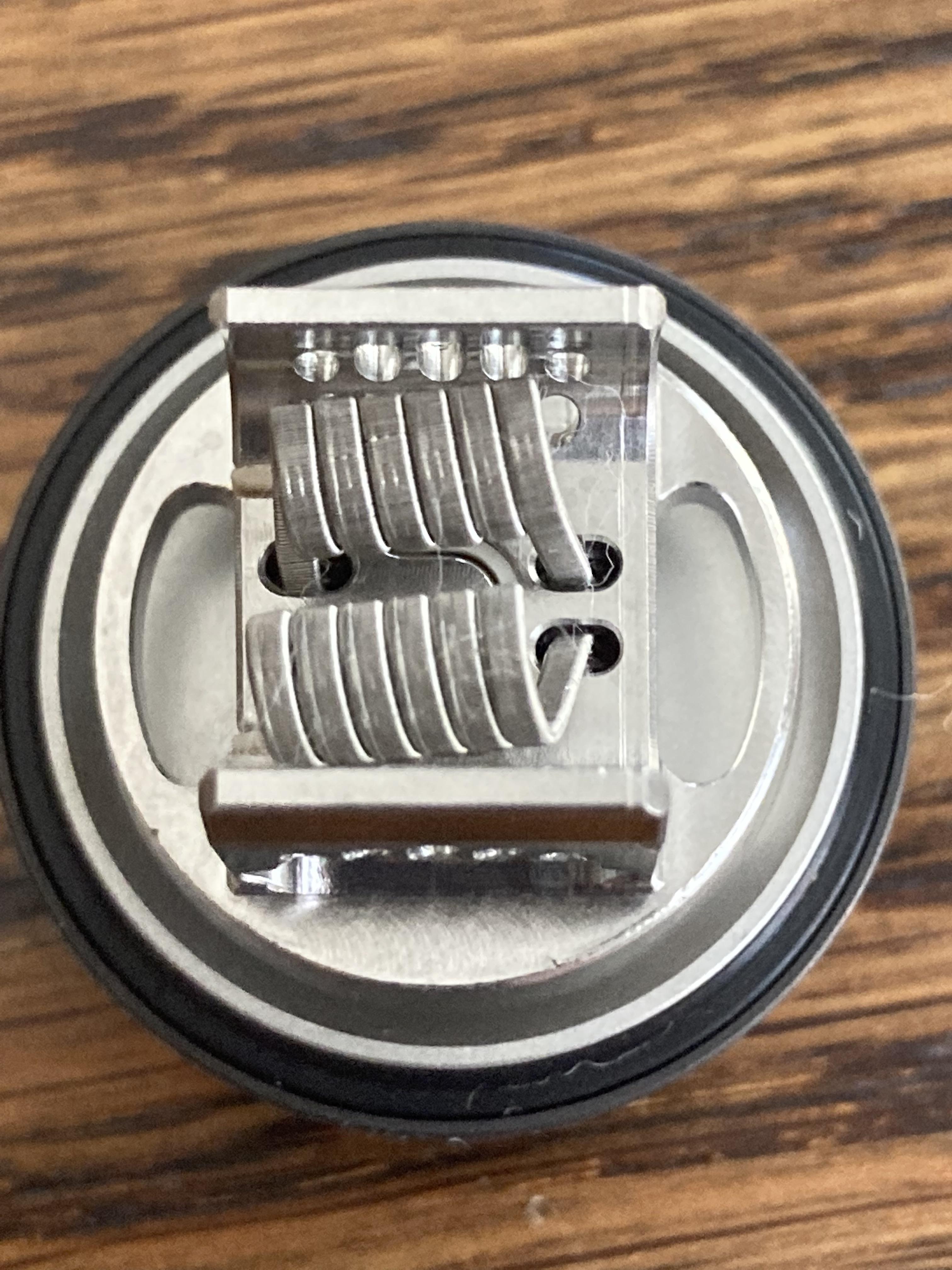 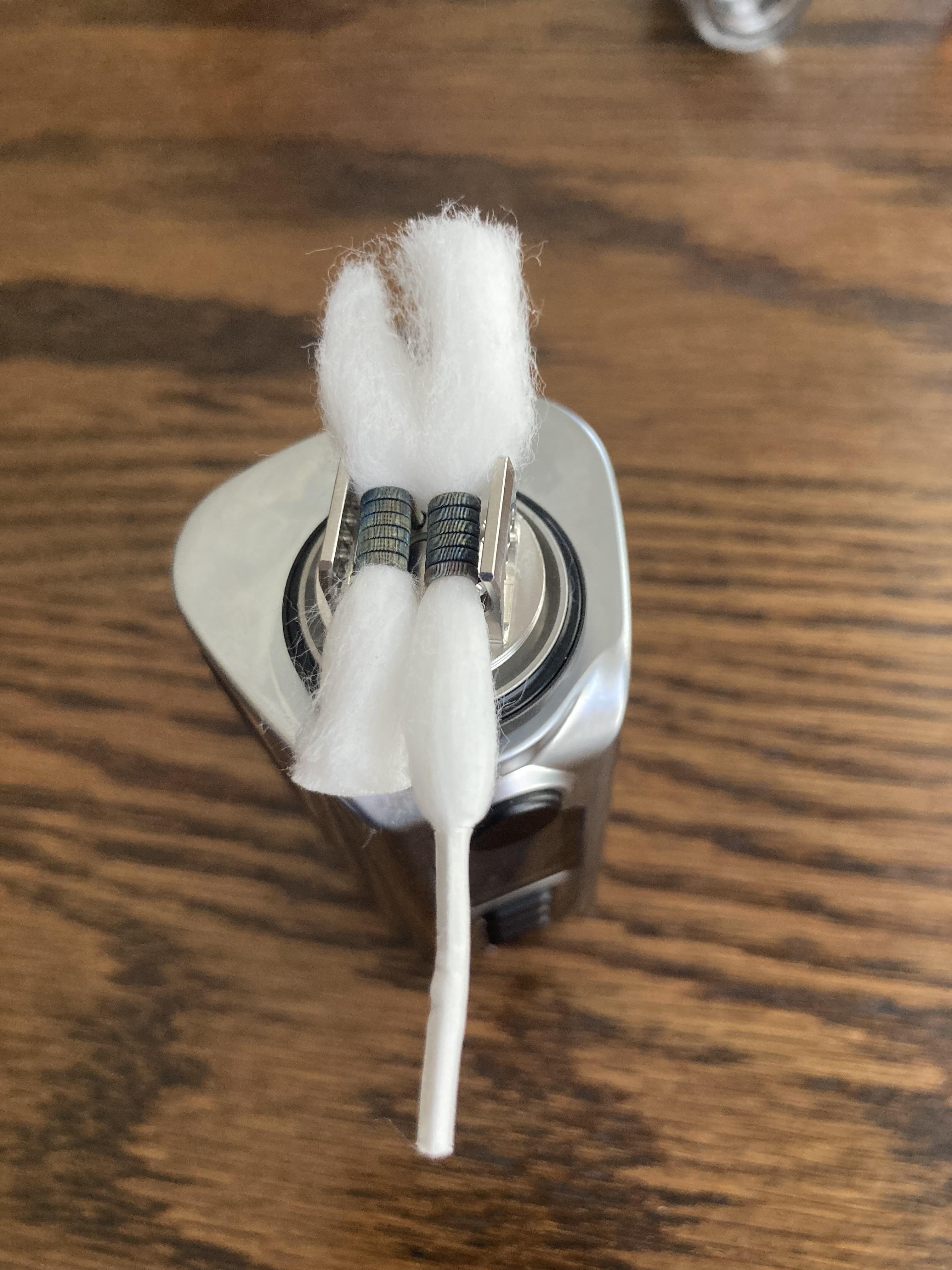 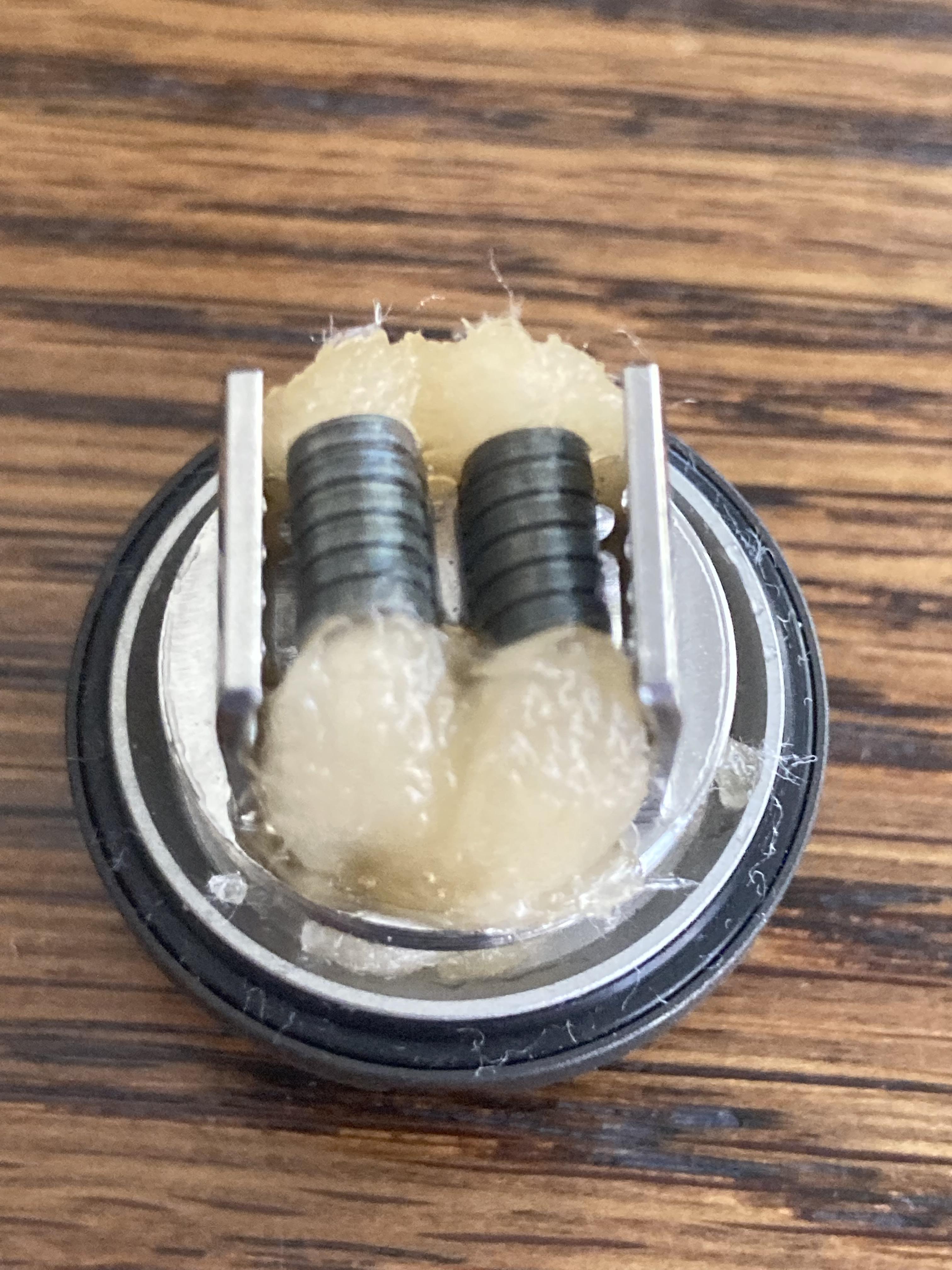 Overall I am very pleased with the operation of the OXVA Arbiter 2 tank. I felt like it delivered exceptional flavor production and huge amounts of vapor even at the settings that I used. I think the included coils could easily be run at a much higher setting than the 55 watts that I ran.

I decided to wait to mention how the Arbiter 2 performed with a single coil until the end since it is advertised to be able to be used as a single or dual coil rta. There is no doubt that it performs very well in the dual coil configuration but I find myself using single coil rtas most of the time. It has been my past experience that most dual coil rtas don’t perform that well with a single coil. Since there is plenty of room on the deck I decided to make a 3.5mm 316ss that came out to .56 ohms. I thought it might look funny on the deck with just one coil but centered it and it looked good. I wicked the coil and just combed out the wick tails a little bit being careful to not thin them out too much so I had enough cotton to go in the liquid ports. At first the flavor was just mediocre but got more flavorful the more I broke in the coil and wick. Would I say it’s the best flavor I ever got from a single coil? No but it is very respectable flavor for running a single coil in a dual coil rta. I plan on running this single coil for some time to see if the flavor progresses more and may try a 3mm coil which is what I usually use on single coil rtas. I did change the 810 drip tip for the 510 adapter and installed my own drip tip for this configuration.

If I had to pick a con for this tank then it would be the shoulder that the drip tip sits on. With that shoulder there are some drip tips that would hang over. In my opinion it’s a pretty minor con for a tank that works very well.

The Arbiter 2 is a very well built and designed rta. I like the ease of building and that the airflow chamber is stationary inside the barrel of the tank so there’s one less part to deal with when building. The ingenious deck design gives the user the FAN airflow that in turn creates very good flavor for the user. The flavor and vapor production is very good in dual coil configuration and decent with the single coil build that I did. I look forward to trying different coils and builds in the Arbiter 2. It’s a very versatile tank. I was asked if I thought the Arbiter 2 could be chosen as the best RTA of 2021 and I think it has a pretty good chance.

I’d like to thank OXVA and Sam for sending the OXVA Arbiter 2 RTA for this review and thanks goes out to the readers. I look forward to future cooperation with OXVA and hope to see you reading my reviews in the future. Below is a link to the OXVA website so you can explore the wide variety of products offered by them. 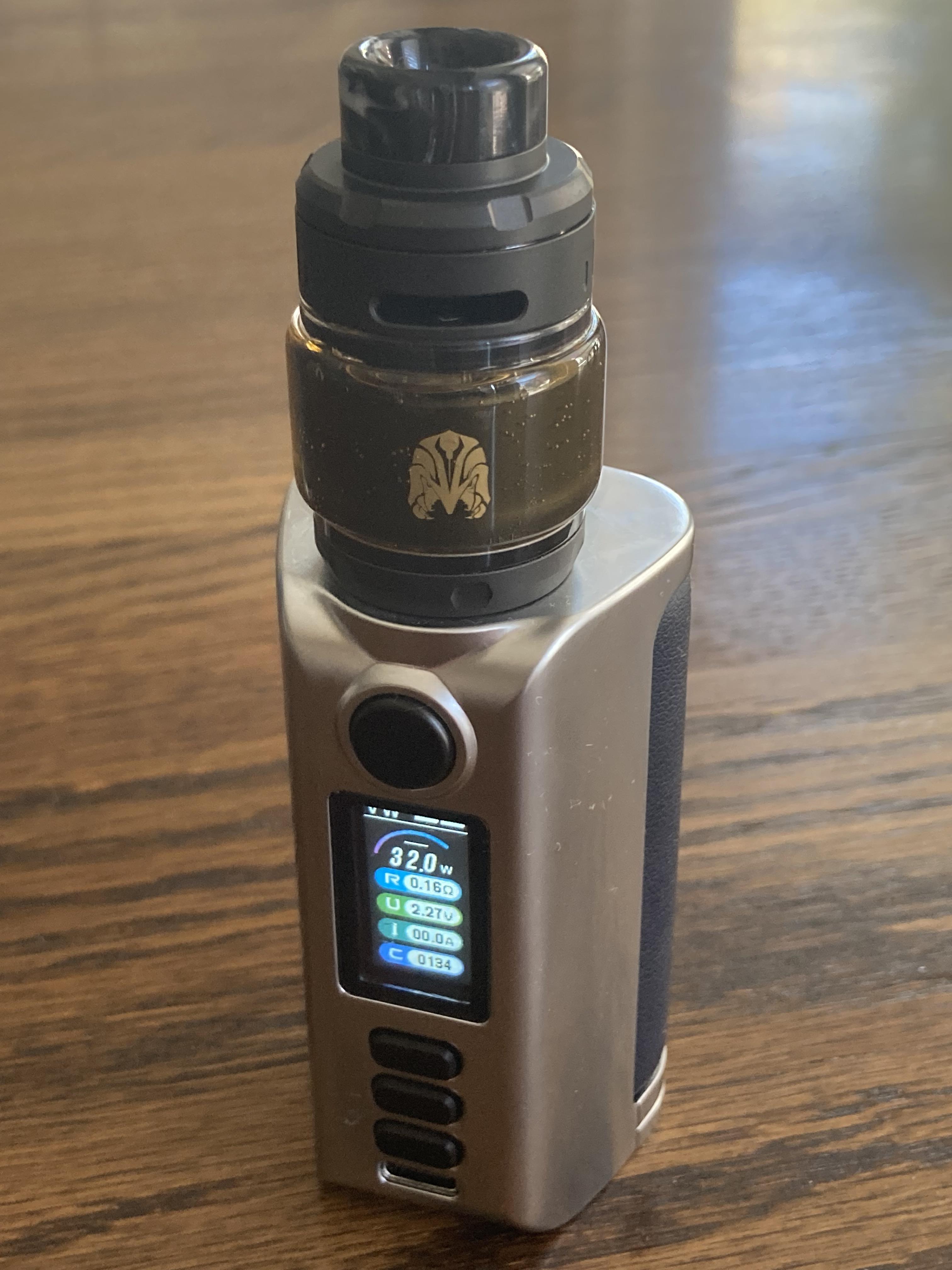