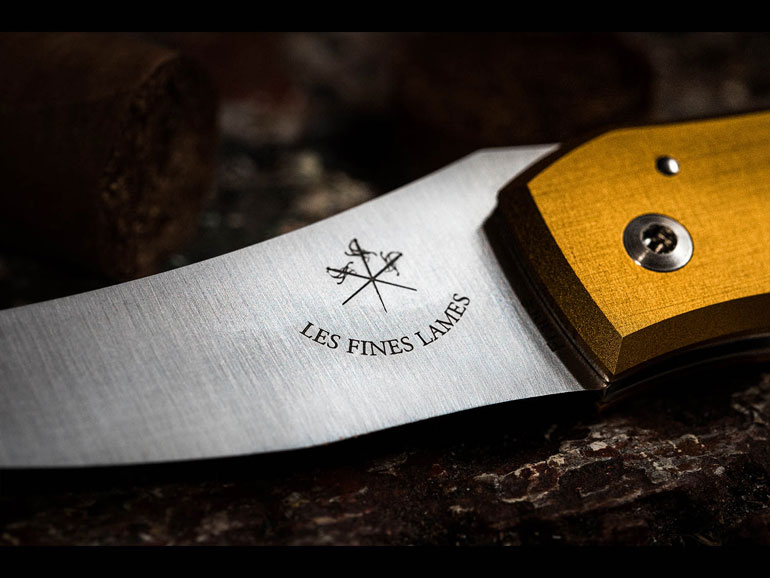 On the 5th of November 2021, three new series were announced in the Le Petit cigar cutter range: Camo, Anodized and Initial.

Totally crafted in the capital of French cutlery, Thiers, Le Petit by Les Fines Lames is an authentic friction folder knife. Small like a pocket knife, its size is 11,5 cm and it has a 6,5 cm non lockable blade made from 14C28N stainless steel offering a razor-sharp cutting edge.

As a handy and easily transportable cigar cutter, the curved shape of its blade and the opening in its handle make it able to cut through the biggest cigars, up to 70 gauge (2,8 cm diameter).
Completing the current Le Petit range of cigar cutters, the new series all have their special appeal.
– The Initial Series, is the new high-end cigar cutter joining the Le Petit range.
With its 5 microns 18K Gold plated handles and featuring a Damasteel Björkmans Twist blade, each cutter produced is engraved with the owner’s initials. Available from 790€ with an included black leather sheath.
– The Camo Series will fit perfectly into most wardrobes, catch the eye when exposed, bring meaning to some, and will follow you from the lounge to the great outdoors with its Navy, Woodland or Desert patterns. Available from 159€.
– The Anodized Series brings a new splash of color with its metallic and colored handles. Known to motorsports enthusiasts, these anodized aluminum finishes offer a beautiful brushed appearance. Available from 159€ in Blue, Red and Yellow.
These new series are available from Les Fines Lames official resellers network (more than 300 POS worldwide) or the brand’s website.