I’m here today to discuss yet another product in the Lost Vape Ursa line of products. This time I was sent the Lost Vape Ursa Nano pod kit by Lost Vape in order to provide a fair and honest review. With so many pods out on the market now it can be a little confusing on which pod device my fit your needs. I’ve been fortunate enough to try more pod devices than I could probably even remember. I’ve found that I prefer ones that have 800-1000mah batteries and an airflow control. Depending on the device and pods or coils that it uses I can either take it or leave it if it has different output levels. The Ursa Nano has an 800mah battery and a nice airflow control so I knew there was a good chance that I might like it. Let’s take a look at what’s included in the kit and some promotional material and I’ll give my thoughts on it. 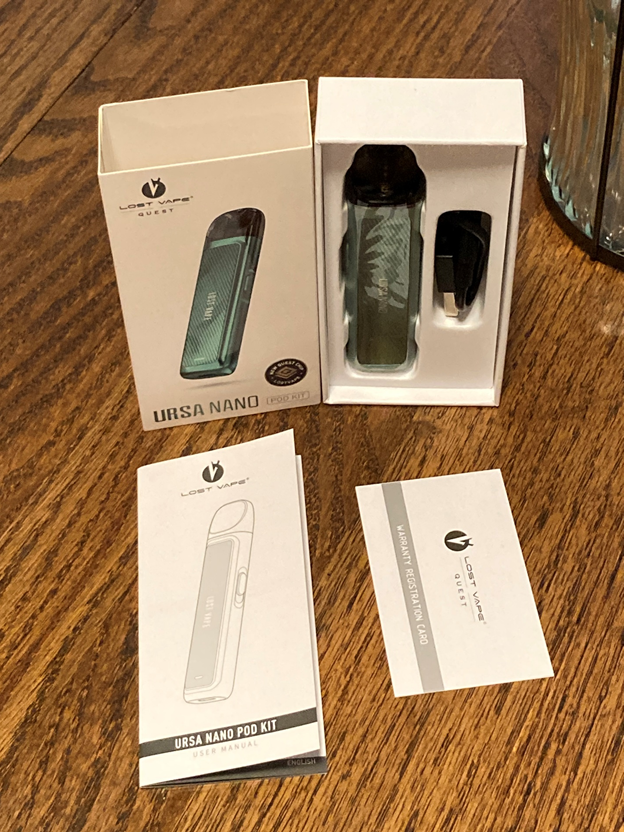 6. The pattern changes color depending on the light and angle you see it through

The packaging on the Ursa Nano is what I’ve become accustomed to from Lost Vape. It comes in a white box with a color picture of the device that is contained inside. It might sound silly but this is one thing that I like. To me it makes sense to have a picture of the actual device on the front instead of using one image for all colors and you don’t know for sure what is inside until you open it. Also one other thing I’ve noticed with Lost Vape devices is that they come wrapped in some kind of protective cover so that they are not damaged or scratched in shipping. The Nano had a clear film wrap around it that slides off over either end.

On the rear of the box is a list of the contents. I was a little bit surprised that only one .8 ohm pod was included in the kit. I’ve seen this on other pod devices that I’ve reviewed and never seem to understand why a second pod isn’t included. If the customer by chance got a kit with a defective pod then the Nano is unusable. Also since there is also a 1.0 ohm pod available then it would just make sense to include one of each in the kit. For the review, I received two Ursa Nano kits and also received two spare 1.0 ohm pods so I could test them. 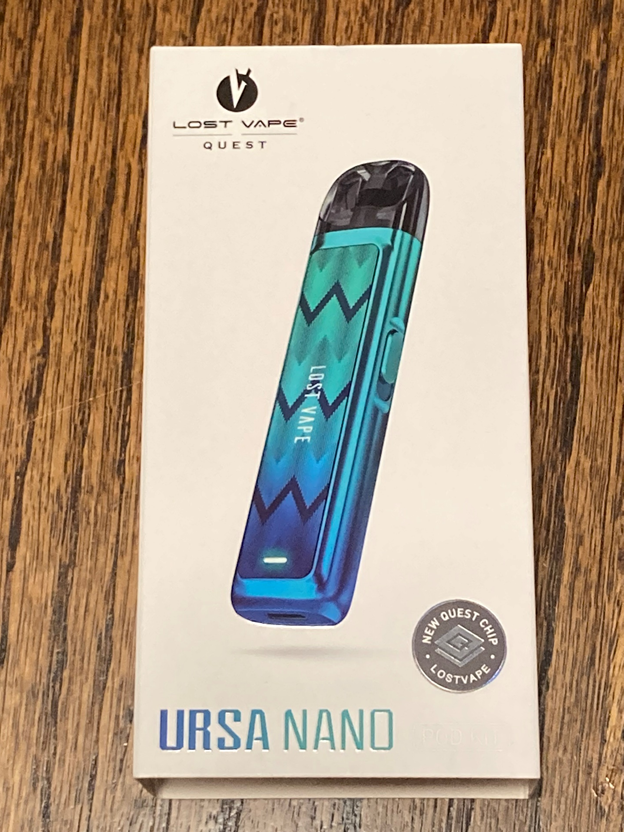 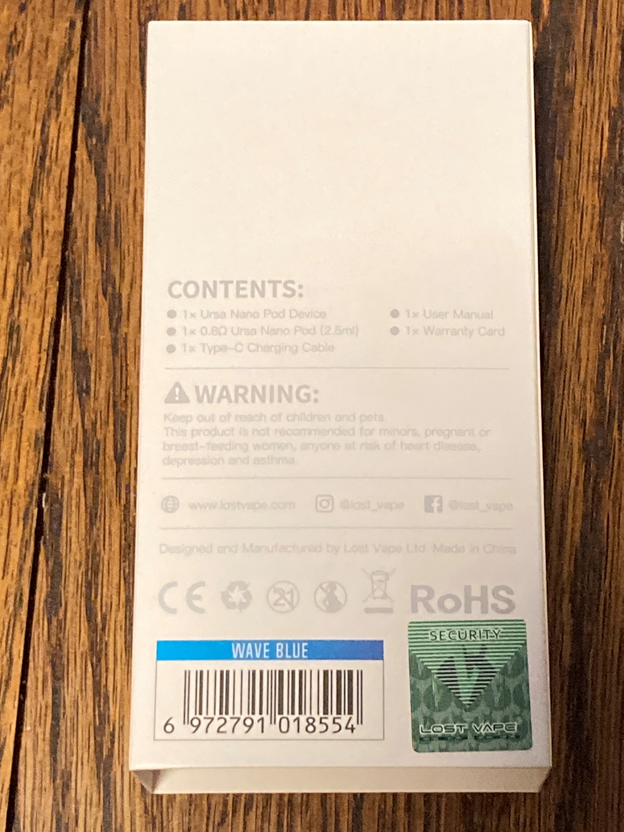 The Ursa Nano is a very simple device that just works well. Being made of zinc alloy gives it a nice weight and does not feel cheap at all. In my opinion the panel designs on the Nano are simply stunning. They look different depending on how the light hits them. On one side is the Lost Vape name and on the other side is Ursa Nano. I received the Wave Blue and Twill Green colors for the review. 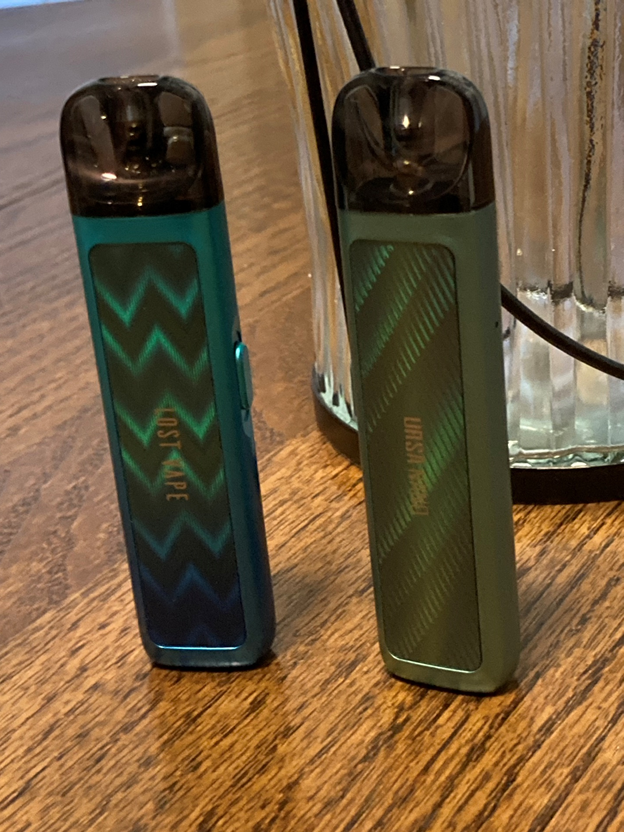 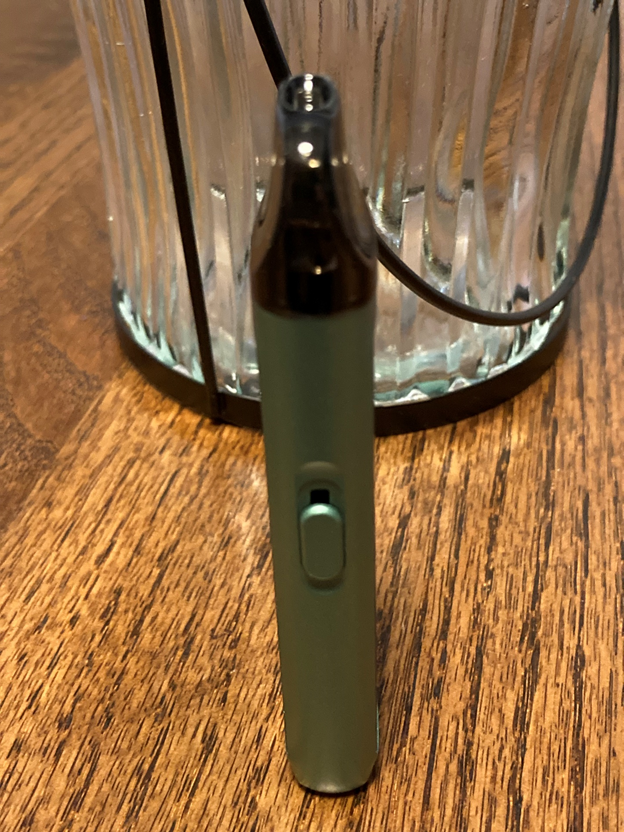 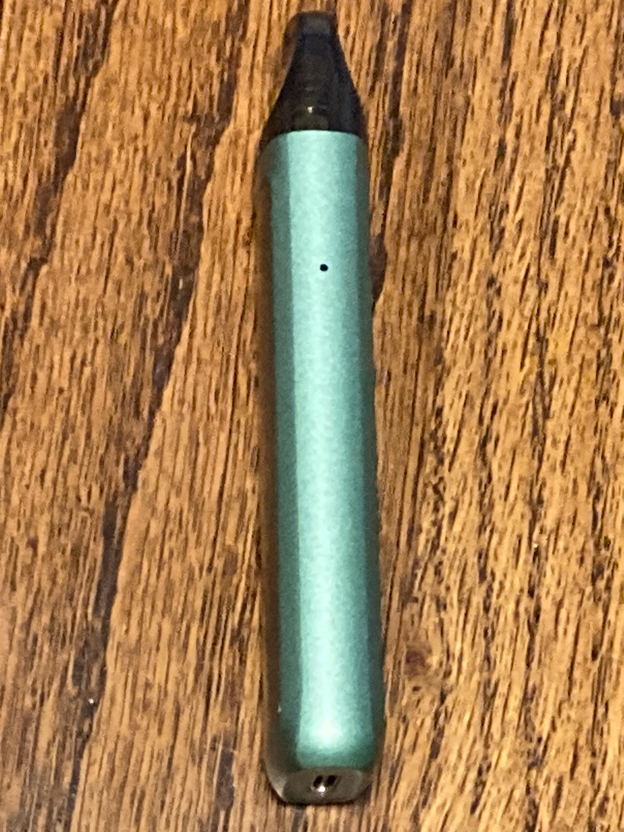 The pod opening has two gold plated contacts as well as two magnets to hole the pod securely in place with no accidental slippage or rattle. Also the raised airflow sensor opening is raised and offset to one side. Beside the contacts are three airflow holes.

The USB-C charging port is located on the bottom of the unit so it must be laid down to charge. With it being an 800mah battery, it can be charged in about 45 minutes. The battery indicator light flashes while it’s charging with the current battery level color and turns solid green when it is finished charging. 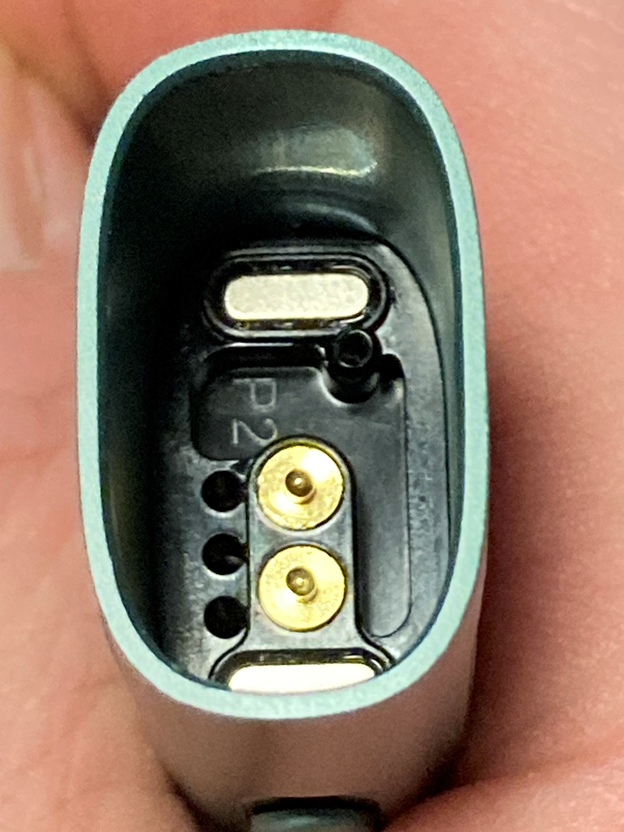 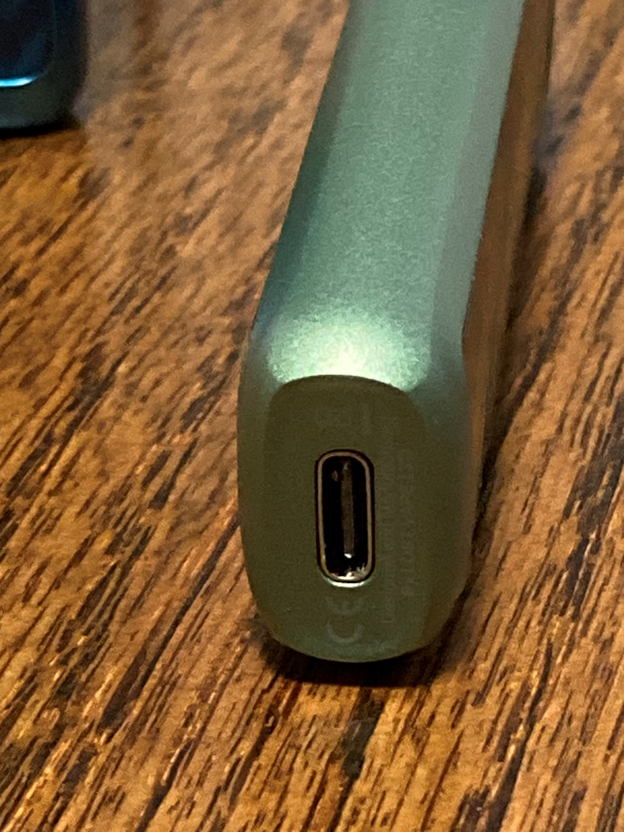 As I had mentioned earlier, the Ursa Nano kit only comes with one .8 ohm pod. The pod does hold 2.5ml of liquid where most pods of this size I’ve seen usually only hold 2ml so that’s a little added bonus. For the review I was provided with two kits and two spare 1.0 ohm pods. I found that I definitely prefer the .8 ohm pod and can see why this one was included in the kit although it would have been nicer if one of each was included in the kit. Both pods delivered very good flavor and a generous amount of vapor for such a small device. I actually could have stood a little bit higher output with the .8 pod but it’s not bad at all.

They promotional material states that it is a clear pod and liquid level is easily visible. That really depends on the lighting. I think the pods are tinted a little too dark in my opinion. To me there’s no reason not to have clear pods.

The pod itself is a side fill so you will have to remove the pod in order to fill it. The pod pre-installed in the kit has a cover over the contacts so it isn’t fired before filling which is a very good idea especially since there is only one pod. The rubber fill port plug is marked with the word OPEN and has an arrow pointing in the direction of which you should pull to open for filling. The fill hole is decent sized and I had no issues filling with a 10 or 50ml plastic bottle.

On the opposite side of the fill plug, the pods have the resistance molded into the side of the pod. On the bottom of the pod there are two magnets as well as the contacts and airflow holes. 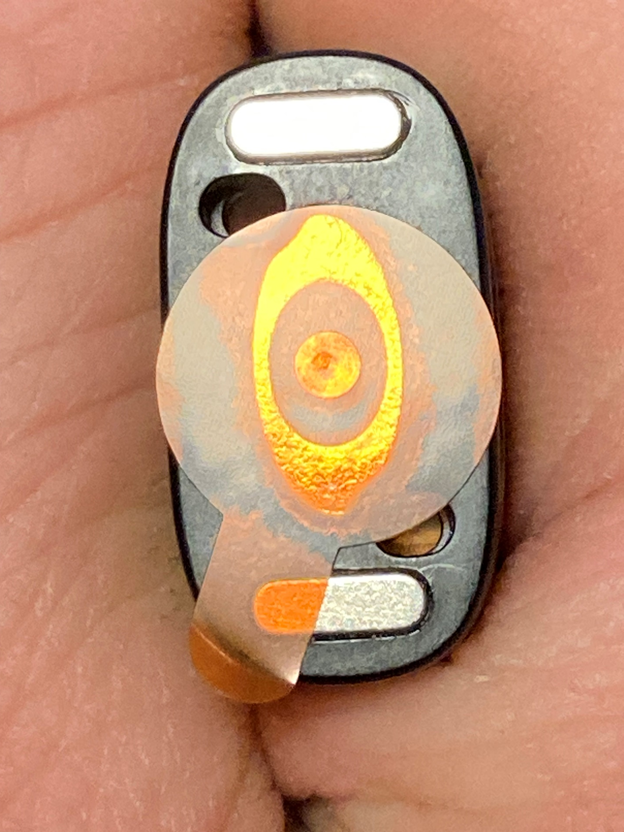 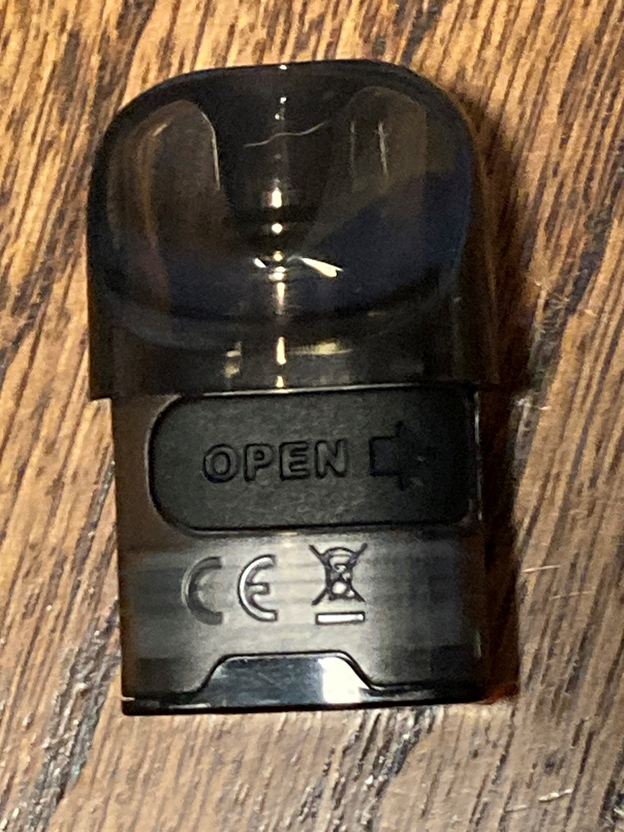 With as many different pod devices that I’ve tested, it is a little hard for one to stand out to me. I would say that the Ursa Nano would fall into my top 3 or 4. The zinc alloy body gives the device a nice weight. Not too heavy and not too light to seem cheap. I very much like the designs of the two that I received and like how they change appearance in different lighting.

Anymore, a pod must have an airflow control for me to really even consider using it long term and the Nano does in fact have a very functional airflow control. It can be adjusted from very loose to fairly tight.

One other thing I look for in a pod device is little or no leaking or condensation. I’ve used both the .8 and 1.0 ohm pods with several fills in each and have gotten no leaking whatsoever. To be honest, I’m not all that surprised because in my mind Lost Vape puts out quality products.

If I was going to change anything about the Ursa Nano then it would be to have the pods as top fill instead of side fill. However, I don’t know how that would affect the leak proof design. At least the fill port plug seems to be made of a durable material and is clearly marked as to which end to open. One thing I always try on pod fill plugs is to see if I can rotate it out of the way while filling. I was able to rotate the fill plug a little which was enough to move it while filling but it was not easy. Perhaps it might loosen up after more times moving it.

One other thing which I’m sure you already know what I’m going to say is that I feel like it should come with two pods. One each of the .8 and 1.0 ohm pods. How disappointing would it be if you bought the kit and the included pod did not work? The pods do seat into the battery very tightly with no wiggling and do not come out accidentally.