I’m very excited to be here today with another great kit from Lost Vape. Lost vape has come out with an entire line of Quest devices that are a great less expensive options to DNA devices for those that either can’t or don’t want to afford the higher price tag of DNA mods. Most recently was the Thelema Quest and like it the new Centaurus Quest BF Kit that I was sent for this review uses the Quest 2.0 chip. This same chip is used in the Cyborg, Ursa, and Grus. The Centaurus Quest BF kit uses a single 18650/20700/21700 battery and has a maximum output of 100 watts. It comes with a 9.5ml capacity squonk bottle and also a storage bottle so you can carry extra liquid with you if you don’t want to squonk. I think it’s a rather ingenious design. Also included in the kit is Lost Vape’s first RDA the Centaurus Solo RDA. It’s a single coil RDA that is very easy to build and provides good flavor for a single coil RDA. 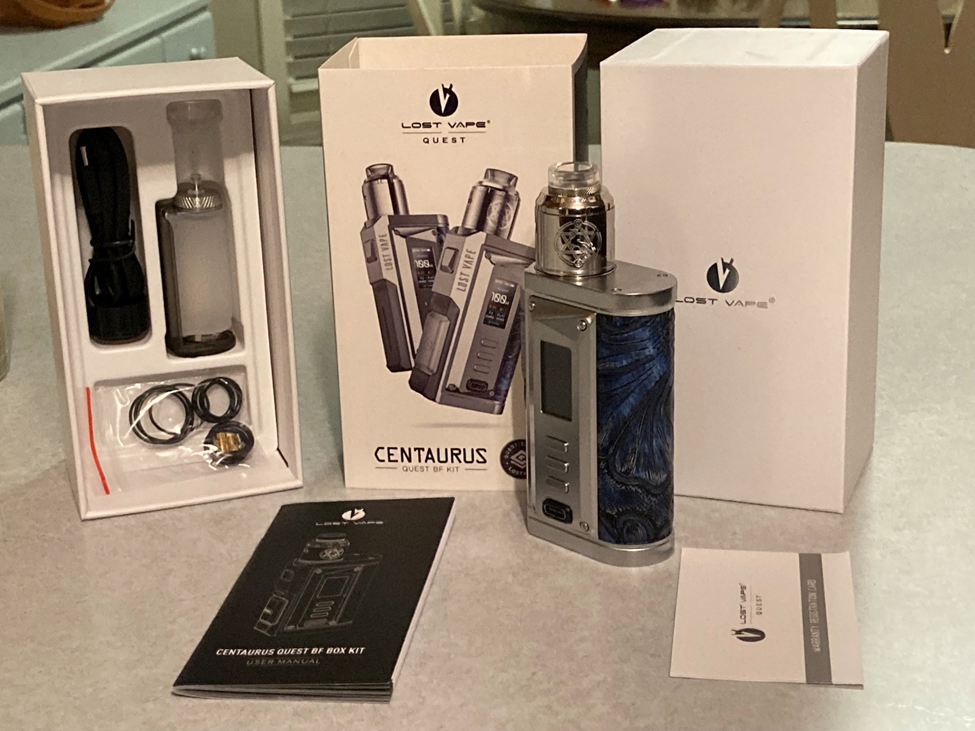 2. Leak-proof 2-in-1 squonk&storage, easily switch between mod and squonk

4. Storage bottle for any other atomizer

13. Adjustable airflow system to amplify the flavor of any e-liquid

15. Centaurus RDA with the alternative pin on the Centaurus Quest BF Mod for better vaping

The packaging of the Centaurus BF kit is the white box with a nice picture on the front that I’ve become accustomed to seeing from Lost Vape. The back of the box lists the package contents but felt like it didn’t really explain that the 9.5ml liquid bottle listed is the bottle that is used to carry extra liquid if you are not squonking. The squonk bottle is also included and comes installed already in the mod. 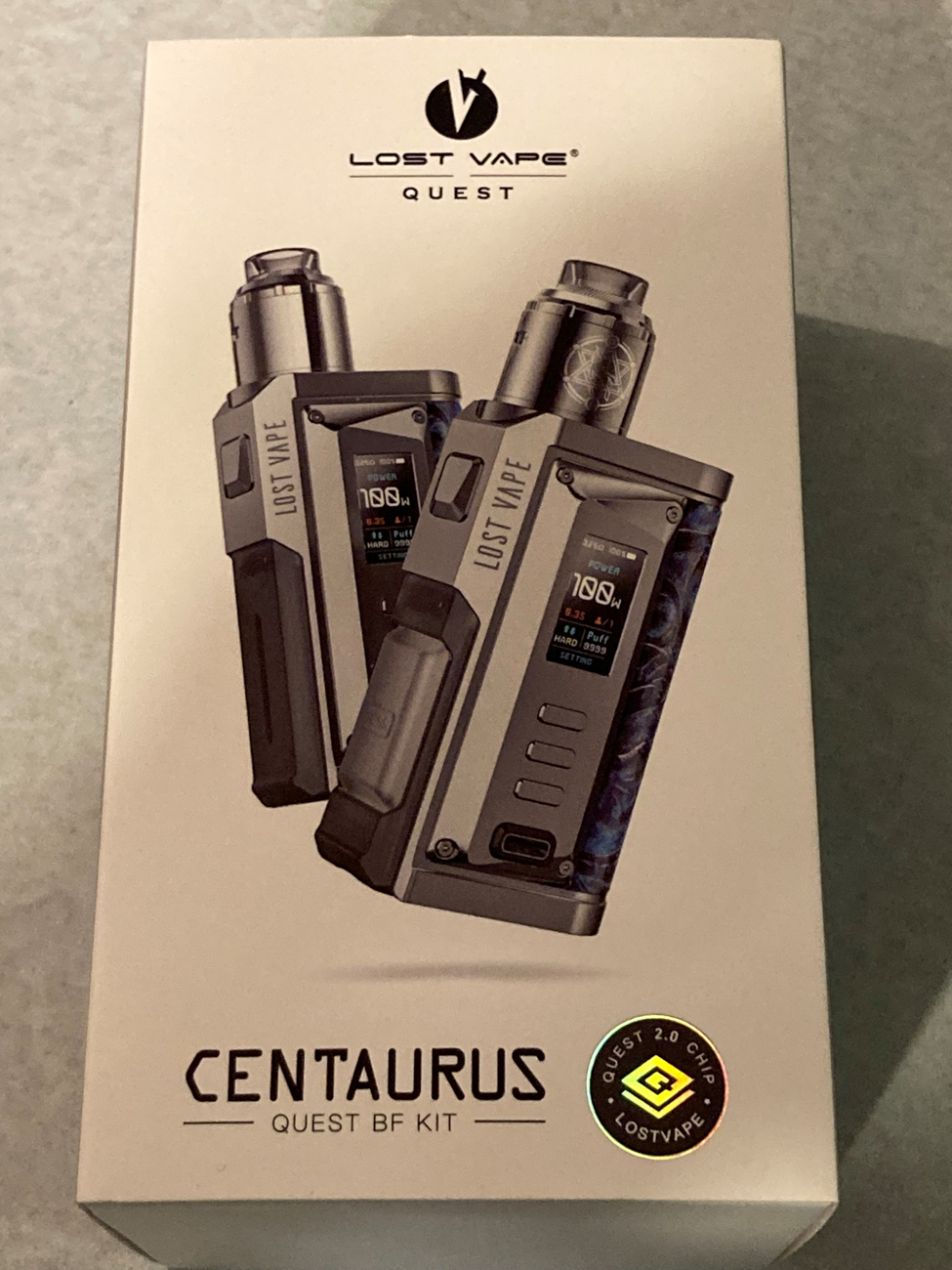 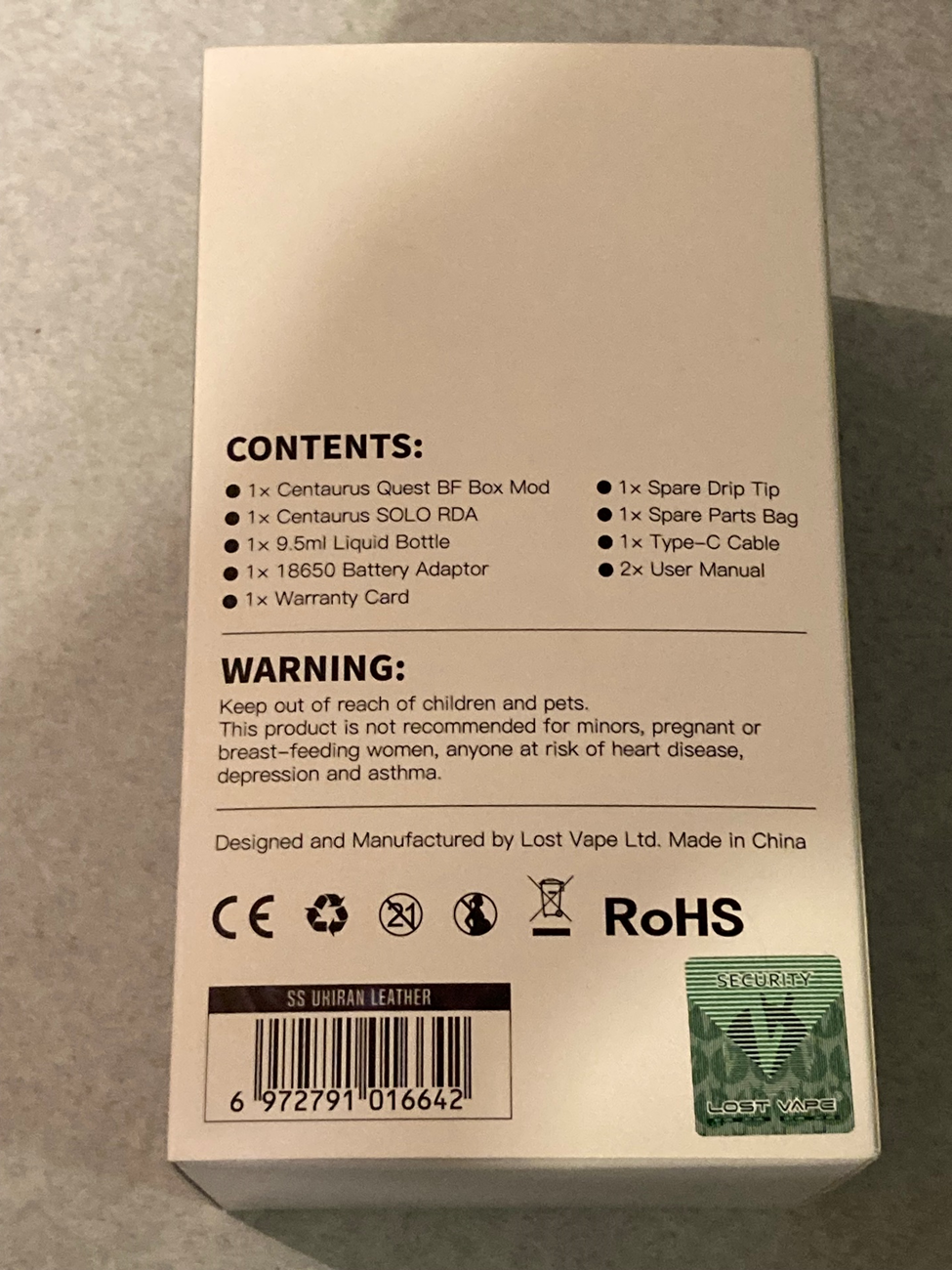 Once opened the mod and rda are wrapped with a protective cover for shipping. I know I’ve mentioned this in other Lost Vape reviews but feel like it shows that they took a little extra care. The mod with the Solo RDA already attached sits in a plastic tray that is easily lifted out and all of the accessory items are found underneath. I thought it was a little odd that there weren’t any coils included but I have plenty of them on hand so installed a .35 ohm Clapton coil. 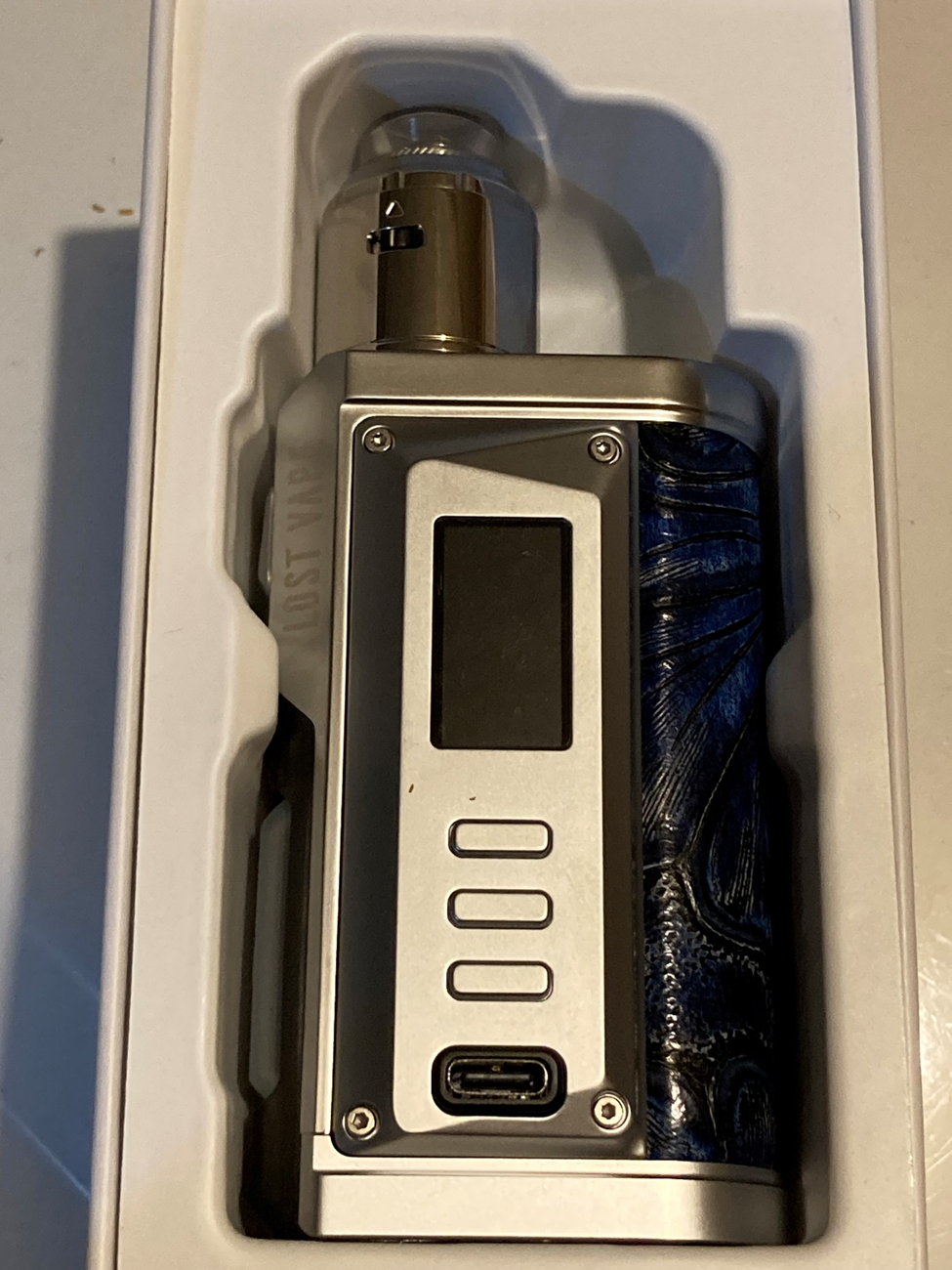 The new Solo RDA which is the first one from Lost Vape seems well built just like their mods are. It is a single coil rda which makes good sense to me since the mod has a maximum output of 100 watts. I’ve reviewed other kits where the rda included with a single battery mod was a dual coil and it drained the battery fairly quickly. This was a good move on Lost Vape’s part in my opinion.

I found the Solo easy to build and sufficient room to clip the coil leads once it was mounted. It came with the squonk center pin already installed which I appreciated since it is a squonk mod. The liquid comes through a hole in the center of the deck. I don’t have a lot of experience with squonking but found that I had to press the bottle and hold it a little longer in order to fill the base of the rda than what I had experienced in the past. I did a couple test runs with the top cap off to get a feel for how to squonk it.

The rda comes with a short drip tip which I changed out with a longer one which was a better fit. I just don’t feel comfortable with short tips. The top cap on mine was kind of difficult to turn so I would recommend lubricating the o ring with some liquid to make it easier to adjust the airflow. Also since it was difficult to turn, I found that the top cap seemed a little thin to get a good grip on to turn it despite the notches cut in it. The flavor production was pretty good for a single coil rda. 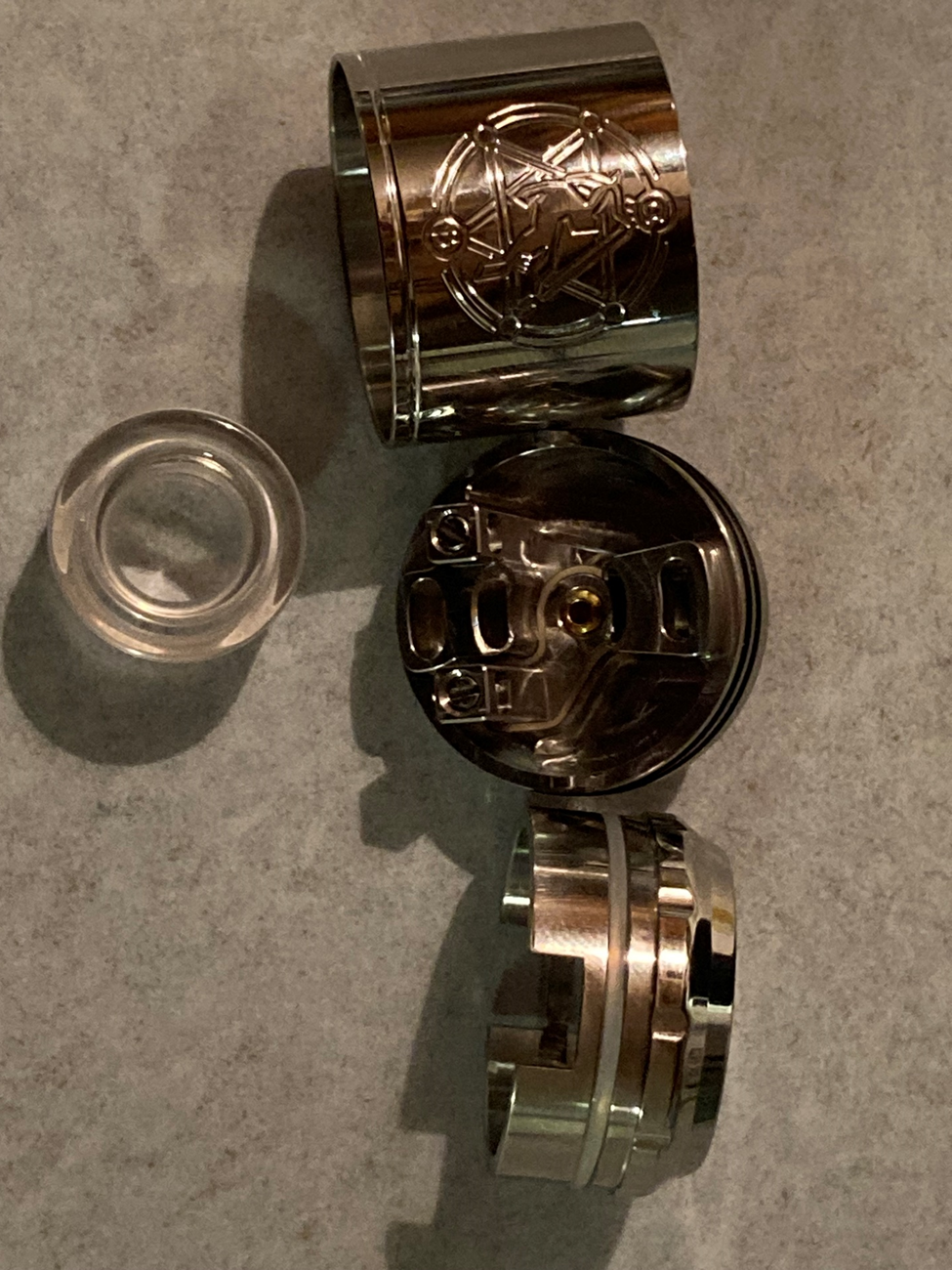 Like I mentioned earlier, I mounted a .35 ohm Clapton coil that was Ni80. I cut the tails a little long and just combed them out a little. I ended up running it in the mid 30 watt range. I struggled a little at first getting the airflow just where I wanted it. There are just two horizontal slots for airflow adjustment. 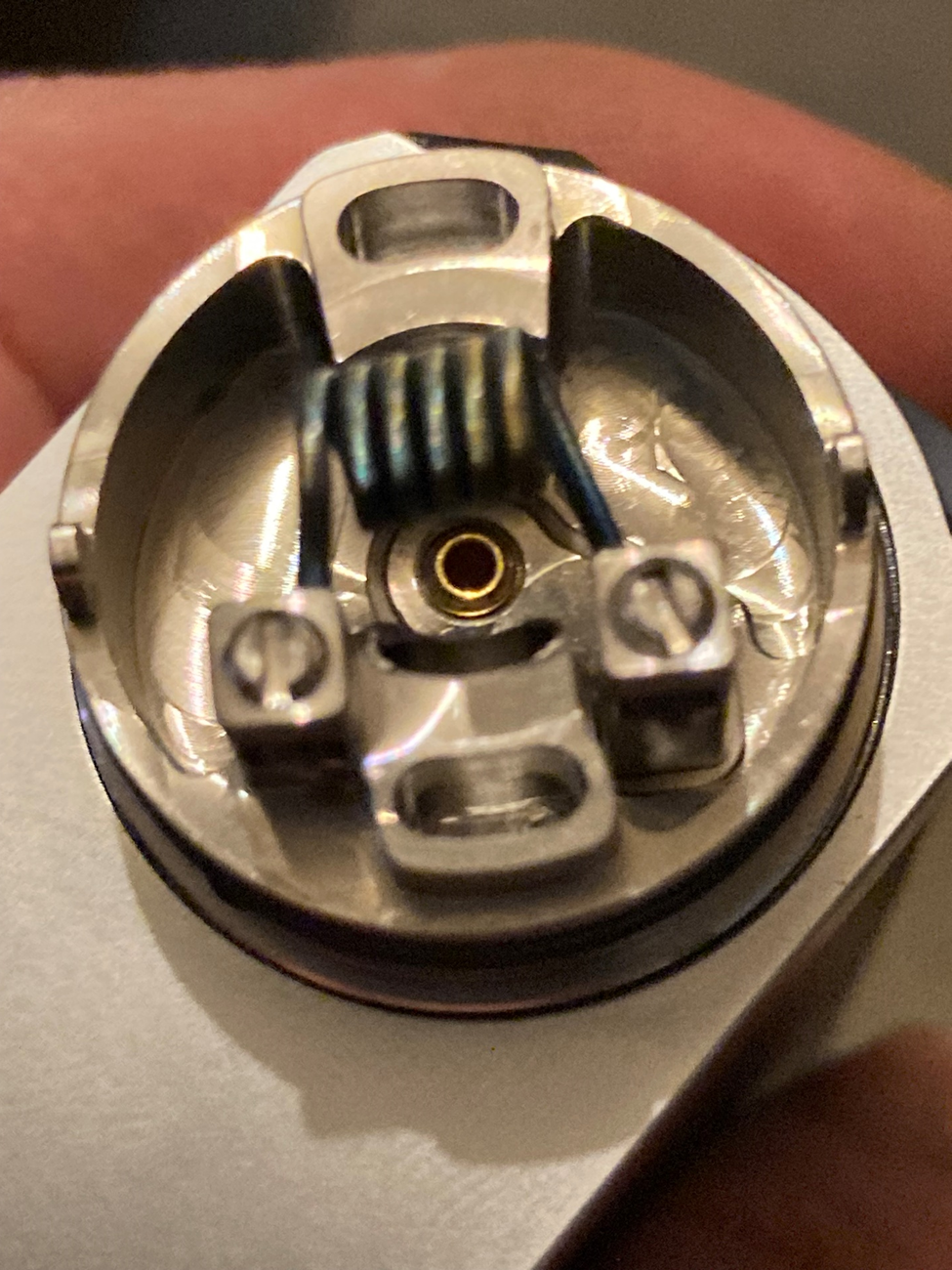 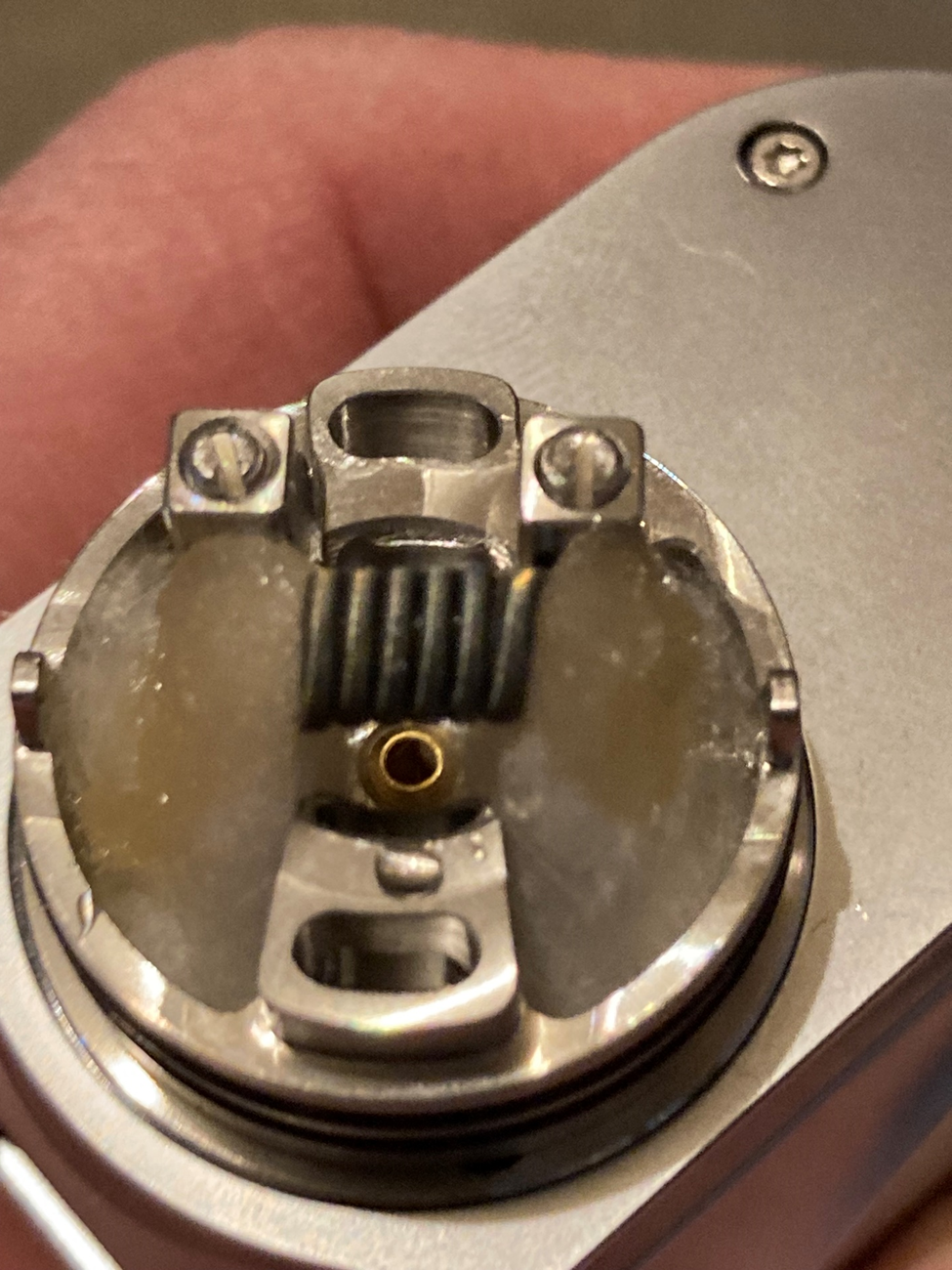 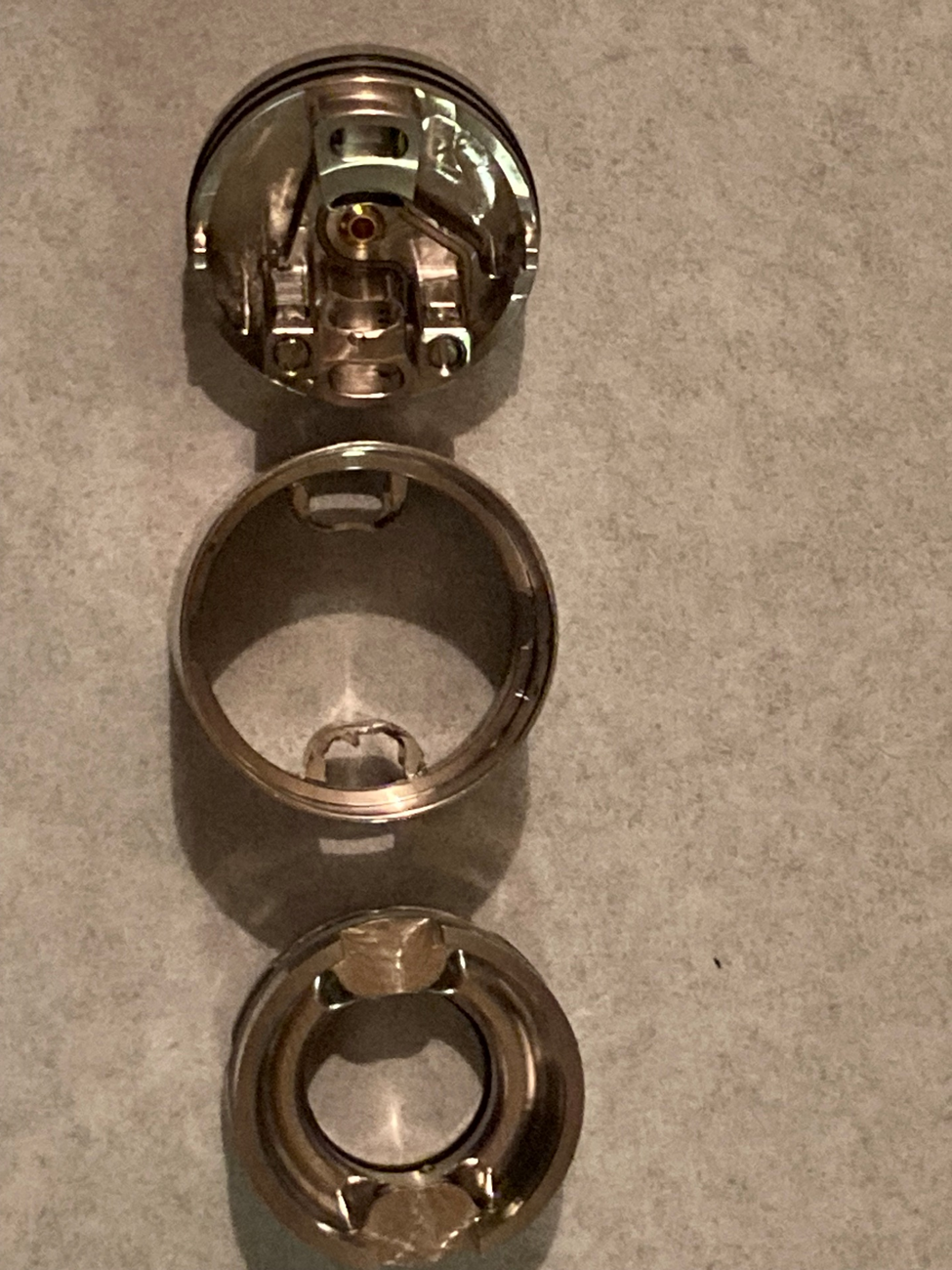 The Centaurus mod is very attractive in appearance in my opinion. The Centaurus uses the same Quest 2.0 chip as a few other Lost Vape mods. The display screen shows the following information.

Once Settings is selected using the center button the following options are available.

With this type of menu there is no need to remember different button combinations besides five presses of the fire button to turn the mod on and off. There are five modes of operation and one of them is TC-SS904 which is good since the .3 ohm coil can be used with that mode. Simply use the + or – buttons to highlight the mode and press the select button. Then you can use the + and – buttons to scroll through the five modes which are 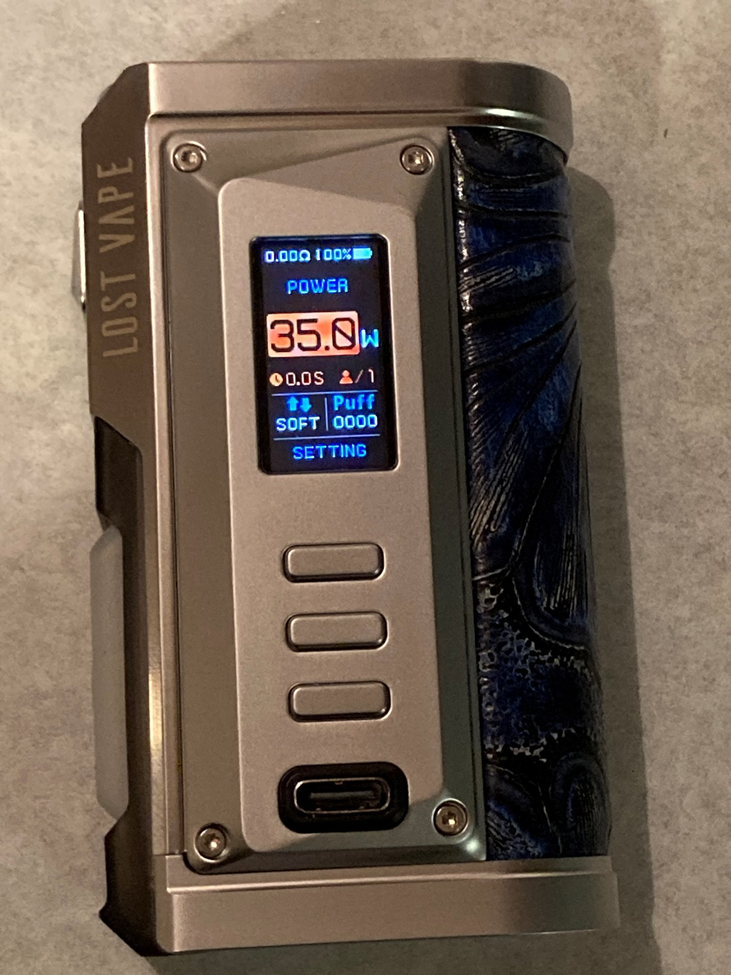 As far as branding goes, there is the Lost Vape name on one side and Centaurus Quest on the other side. Rather than being on the screen side, the slanted fire button is on the same side as where the squonk bottle is exposed. I found the fire button very comfortable to use. I am normally a thumb firing person but with this mod the only thing that makes sense to me is to fire with the index finger with the beautiful leather portion resting against my palm.

The squonk bottle holds 9.5ml and is filled from the bottom. To me it’s a rather ingenious design where the squonk bottle simply slides out the bottom and the carry bottle can be inserted in the same way. The bottle can be bottom filled without removing it from the device. There is a small screw in cap that must be removed. I am not as agile as some so had a tiny bit of trouble holding onto the small cap and screwing it back in but with the large liquid capacity it’s not like I will be refilling it that often. 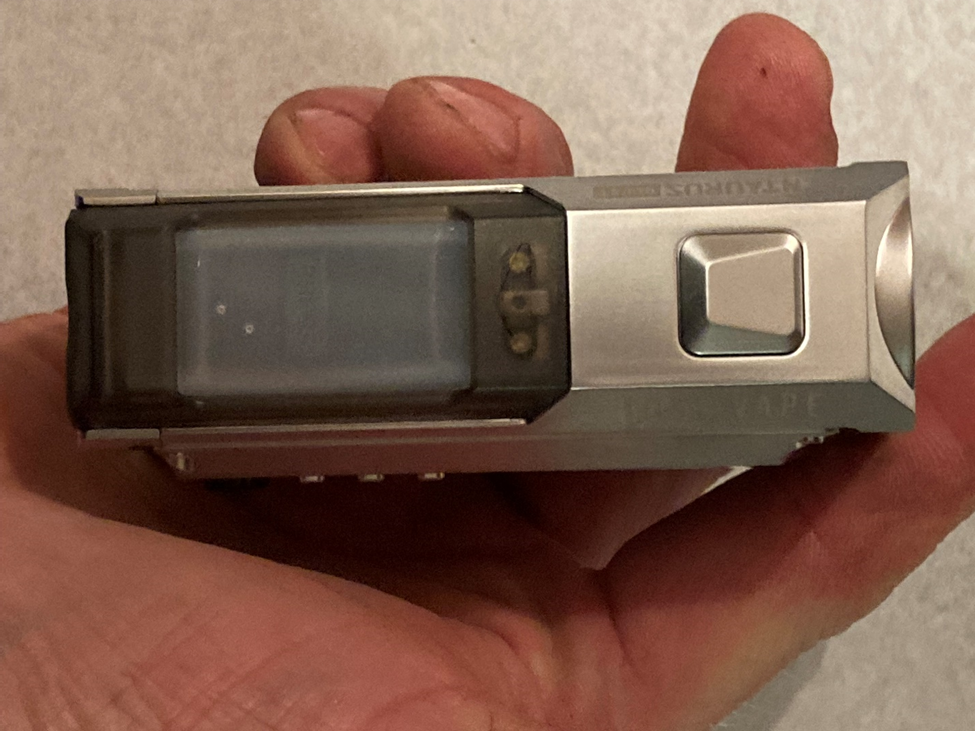 The bottles have a nice metal tip with o ring to help with a leak free connection. Below you can see the small cap for the bottle refill and also the battery cap which is pretty standard these days with a flip up lever and the cap threads in. The threads on both caps were very smooth. In the second picture you can see where the bottle makes connection inside the body of the mod.

The 510 connection plate is held in place by three torx screws and is large enough to comfortably hold a tank with a 26mm base. I’ve noticed on some tanks that the bases are actually smaller than the upper barrel of the tank. I think for a mod like this that 26mm is large enough to fit most commonly used tanks. In the center you can see the opening where the liquid is fed through to the rda if you are using a squonk rda.

From the moment I opened the box, I fell in love with this mod. If I had been given a choice on which to review then I would have picked the exact one that I received. I’ve never been much of a squonk mod user in the past and have mostly just used them for reviewing rdas. This mod makes me want to use it.

From the tried and true Quest 2.0 chip that has been used in a handful of different mods to the visually attractive appearance and the feeling of a device that is quality made, the Centaurus Quest BF is a fantastic mod in my opinion. If you aren’t a squonk person then there is also a carry bottle included where you can carry extra liquid in the mod for your preferred tank. Also having the ability to use an 18650 or 21700 in the Centaurus is a plus. I’ve been really liking the battery life I get with the 21700 and the single coil rda.

The Centaurus Solo RDA is Lost Vape’s first release of an rda and I feel like they did a pretty decent job of designing and manufacturing it. There was some thought put into it with the airflow channels in the different parts of the body that direct the airflow inside the rda. I think it was smart sticking with a single coil rda for this device. I installed a .35 ohm Ni80 Clapton coil in the rda and was able to run in the low to mid 30 watt range comfortably. The airflow adjustment on mine was pretty tight but I am sure will loosen with time. I have come to prefer honeycomb airflow and kind of wish the Solo had it rather than the two horizontal slots. I had a little difficulty setting the airflow where I wanted it. Partially due to the tightness but also the top cap you turn to adjust it is a little short in my opinion and despite the notches cut in it I had a little trouble getting a grip on it.

Overall I think the Centaurus Quest BF Kit is a fantastic kit and would definitely recommend it to those that like this type of device. Whether you’re a squonk user or not there is a bottle to fit your needs. I’d like to thank Lost Vape and Chloe for sending the Centaurus Quest BF Kit for this review and thanks to the readers. I hope my review was helpful. Below is a link to the website if you would like to investigate more.