Home » Cigar » Learning How To Taste A Cigar
Cigar

Learning How To Taste A Cigar 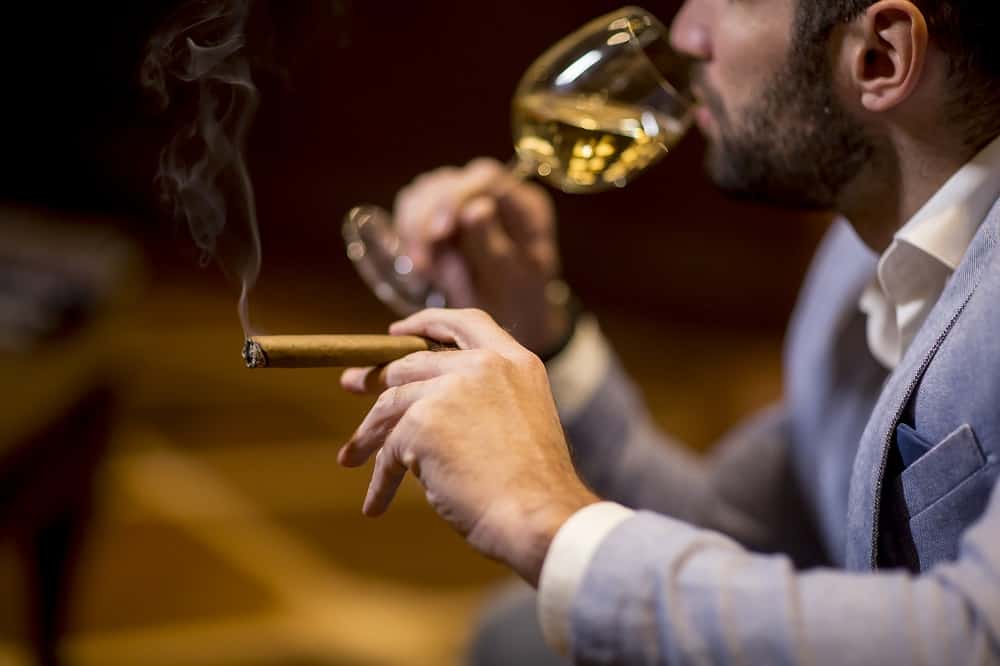 One of the most overwhelming parts of the cigar world is just how many cigars there are out there. If you’re just now starting to get into cigars, the sheer number of different options you can try can quickly become too much. This is why knowing how to taste a cigar is one of the first things you need to learn. That will allow you to easily find the right cigar for your taste buds and add it to your collection as you move forward.

When tasting a new cigar, there are a few things you have to take into consideration. These are:

Before we dive deeper into this topic, make sure you check out my guide on some of the best cigar humidors for this year! Having one of these humidors will ensure that your cigars will stay fresh and develop a unique taste of their own over time. Now, let’s jump straight into this!

While it might not sound very intuitive, and indeed it isn’t, before you get into the cigar’s properties, you should start with the most obvious – its looks and feel. As obvious as it may seem, a cigar should feel smooth between your fingers. It shouldn’t crack or produce dry noises. The cigar should also be soft and not too firm. This will indicate that the cigar hasn’t been stored properly. The wrapper (the outermost part of the cigar) should be smooth and should also have a slight shine to it. There shouldn’t be any blemishes or any stems around it. All of the leaves of the cigar, including the wrapper, should be spiraling in the same general direction.

Good cigars are soft and spongy and quickly get back to their original shape once you squeeze them. Make sure there aren’t any soft or hard inconsistencies along the cigar’s body since that is one of the main signs of poor design and construction of the cigar. These are the main ways to test a cigar straight out of the box. The next thing you do is put it in your mouth and taste it before lighting it. The flavors you might taste often differ from the ones the cigar produces when lit.

One of the hardest parts for beginners is the flavor of the cigar. Of course, it can be as simple as coffee or chocolate, nutty, or other sweet notes but it can also be super specific such as cayenne, red pepper, dark roast coffee, cashews, and more. This is why there are different flavor wheels on the internet that help you navigate through all the major groups of flavors and their further divisions. For starters, you should learn how to differentiate the main flavors out there. These are:

What you need to remember is that the taste of a cigar is strictly subjective and everyone will put it in a slightly different place on the flavor wheel. Furthermore, there are plenty of cigar lovers that will openly confess that they only taste the cigar smoke without being able to tell the different flavors apart. So, don’t worry if you cannot pinpoint exactly what flavor a cigar has.

Cigars that pack more than a few flavors are considered complex cigars. One of the best tips I can give you with them is to smoke them slowly. This will give you more time to process the different flavors. Take slower and longer draws. This will keep the cigar burning at a lower temperature which will give the flavors more space to shine.

For a far more detailed take on the different cigar tasting notes and flavors, click here!

The balance of a cigar is a very masterful thing to gauge. In its essence, the balance is tightly connected to the flavor. Let me explain – our tongue can detect five main flavors – sweet, sour, umami, salty, and bitter. Each of the cigar flavors will be detected by a different part of our tongue. For instance, coffee, citrus, and chocolate notes will be picked up by the bitter zone of the tongue which is at the back (the root).

Balanced cigars by definition present all their flavors in an even manner without any single one of the overwhelming any of your tongue’s 5 senses. A healthy and well-balanced cigar will bring a good blend of sweetness, bitterness, and other creamy tastes. On the other hand, a less-balanced cigar will be either too spicy or too bitter.

This is why tobacco makers carefully pick which leaves to pack together and what wrapper to use. Everything in a cigar should compliment the rest of its components without being too powerful on its own. Exactly that is what makes cigar making such an artful craft, appreciated by everyone that has ever tried a well-made cigar. 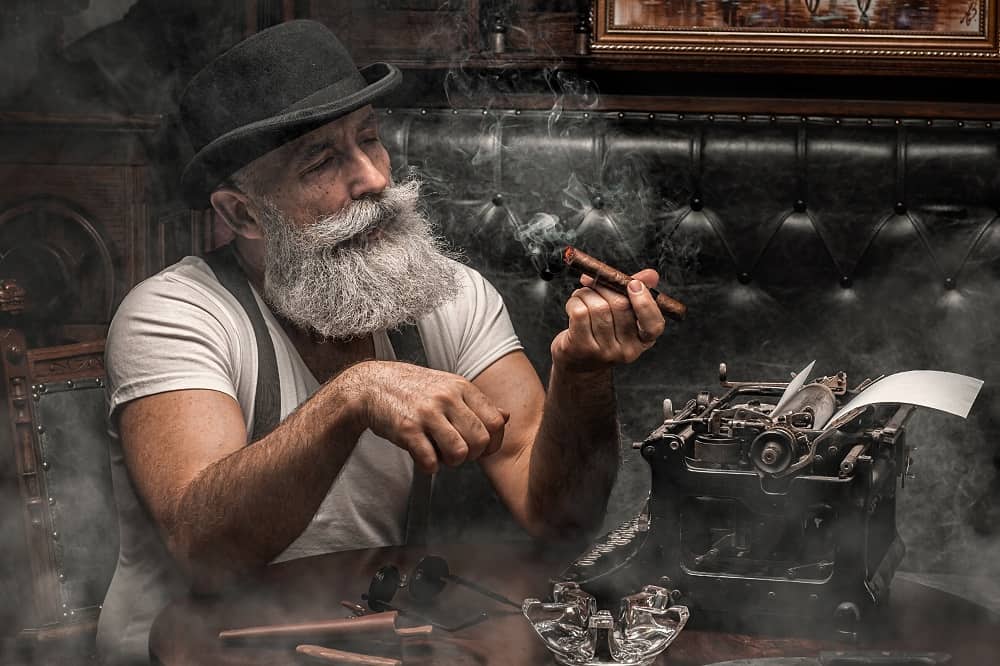 The body of the cigar refers to the smoke it produces. In simple terms, the more (and thicker) smoke a cigar produces, the fuller it is. Generally, cigars are divided into mild, medium, and full-bodied. A good example of a full-bodied cigar is the Ashton VSG. That cigar has rich, dense, and heavy smoke. On the opposite end, a cigar like the Ashton Classic is a good example of a mild-bodied or just a “mild” cigar. Its tastes are less pronounced and the smoke is softer and less dense. The middle ground is held firmly by cigars such as the Arturo Fuente Hemingway.

A good analogy for the body of different cigars is that full-bodied cigars are like aged scotch whisky, while mild cigars hit your palate as light beer.

When cigar makers make various cigars, they have to make the right mix of filler, binder, and wrapper leaves. Depending on the said combination, they can adjust the nicotine concentration or “strength” of the cigar. This quality of the cigar is also fairly subjective, as everyone’s tolerance to nicotine is different. To some old-time smokers, only a handful of cigars will seem strong, while to a beginner most full-bodied cigars will be far too strong for them to enjoy.

Another aspect that might affect you accurately judging the strength of the cigar is how fast you smoke it. Since nicotine builds up in our bodies, smoking a cigar faster will make for a stronger initial effect but also a longer residual one. This is why, as a beginner cigar taster, you should try to smoke cigars slower.

Deep into our limbic system, the aroma creates a certain memory for the cigar’s characteristics, which can bring along other memories about it such as its taste, aftertaste, strength, boldness, and more.

So far, we’ve analyzed the cigar using three of our senses – visual, the sense of smell, and taste. Another aspect we might’ve used when testing the new cigar is the sense of touch and feel. The finish in itself is part of the taste but it is what comes after the initial taste that matters here. As a rule of thumb, the longer flavors stay in your mouth, the better. Typically, flavors like coca, coffee, and licorice are far more persistent than others on our taste buds. The reasons for that aren’t well-researched but it is a well-known fact.

To make things simpler, the cigar’s finish can be divided into long and short. Short finishes won’t leave a lot of notes and flavors in your mouth after you’re done smoking the cigar. On the contrary, long finishes will linger for longer and will leave a much stronger aftertaste in your mouth. Milder cigars like the Ashton Classic or Montecristo have a shorter finish. However, that doesn’t mean they aren’t complex, it simply means that their taste stays as long as you actually smoke the cigar.

Cigar tasting is a delicate process and while everything until now holds true, it still is a subjective process that can be done in a variety of ways. This is why I wanted to give you a few pointers which you can use to your advantage on your first cigar tasting session.

All of these tips will help you gather experience and get into cigar tasting with the right fundamentals. And remember – this is something that takes people years to master and only works if you keep trying different cigars and reflect on your experience after smoking each one. Some people I know take notes of each cigar and have a large table or diary where they rank their favorite cigars and compare different ones they’ve smoked.

Many advanced cigar aficionados love pairing their cigar tasting sessions with their favorite drink. To learn more about cigar and alcohol pairings, make sure you visit my article on the topic!

A cigar that has gone bad often comes with a stale taste. You will be able to easily distinguish it from the rest of the cigars in the humidor since it will leave a sand-like or dirt taste in your mouth. Fresh cigars will often have a well-balanced taste which will come with tons of earthy, fruity, nutty, or wooden notes and flavors.

Can you smoke a very old cigar?

Depending on the definition of an “old cigar”, typically you can smoke cigars that are 20-30 years old. That is, of course, if they have been stored properly in a good humidor.

How many cigars can you taste at one go?

Depending on the strength and flavors of the cigars, you can often taste and try tens of cigars in a single session. However, some notes and tastes might get mixed up and your palate might get far too overwhelmed with the different tones. This will lead to some confusion or, at the very least, dullness towards the following few cigars you will try.

Knowing how to taste a cigar depends on your knowledge of all of its aspects. A thorough test of a new cigar includes going through its appearance, flavor, balance, body, strength, aroma, and ultimately – the finish. All of these aspects include countless details that will create the overall profile of the cigar. As a beginner, focus on mild and medium cigars with straightforward notes and flavors until you build your taste for them. Only then, start working your way up with stronger full-bodied cigars that will challenge your senses.