The story of La Aroma de Cuba Pasión begins more than a decade ago, roughly 18 miles due east of Esteli, Nicaragua in a region named Namanji. It was here that Jose Pepin and Jaime Garcia noted that the unique microclimate of warm days, cool nights, and fertile black soil was ideal for producing tobaccos of exceptional quality and depth. The Garcia family set up their prized 300-acre farm in a basin nourished by a snaking river and dedicated over a third of it—shielded from sunlight—to producing an exceptional Cuban Seed, Shade Grown Nicaraguan wrapper leaf. And it’s this uncommon and extraordinary tobacco varietal that dresses La Aroma de Cuba Pasion.

Like other La Aroma de Cuba cigars, this blend features an intricate and ornate primary band and is promised to deliver a medium to full bodied experience with tones of cashews, leather, and cedar.

Presented in boxes of 25

Construction: Extremely well made. No soft spots and the wrapper had very few veins. Although shade-grown, the color is closer to dark natural, and texture-wise appears to be a bit delicate. The rolling is virtually seamless and the three-seam cap is perfectly applied.
Draw: Using a double blade cutter, my draw was perfect.
Pre-light flavor: Somewhat herbal and sweet.
Toasting & Light: Excellent. Foot takes nicely to flame offering notes of earth, chocolate and black pepper on the finish.
Base flavors: Earth, chocolate, black pepper, cedar, cashew, baking spice, sweet tobacco.
Retrohale: N/A.
Aromas: Wrapper – barnyard hay; Foot – herbal; Smoke – sweet.
Burn & Ash Quality: Superb with a fairly thin carbon line. Ash is firm on the cigar, but breaks up easily when tapped into the ashtray.

Summary: From the start this cigar was somewhat earthy, chocolatey, and loaded with chewy smoke, not the usual front-loaded spice punch found on many Nicaraguan puros. However, there was some black pepper on a dry finish. The cigar also produced a very clean and even burn throughout. For the most part, the smoke was very creamy and smooth on the palate with a well-balanced, medium-bodied mix of sweetness and baking spices.

By the midsection the body and strength move up a notch. Some cedary notes appear, including cashew, and the cigar begins to reveal its true complexity. The smoke is still creamy on the palate, and the flavors remain well-balanced. All of this continues into the final third as the cigar peaks at medium-full in body and strength. 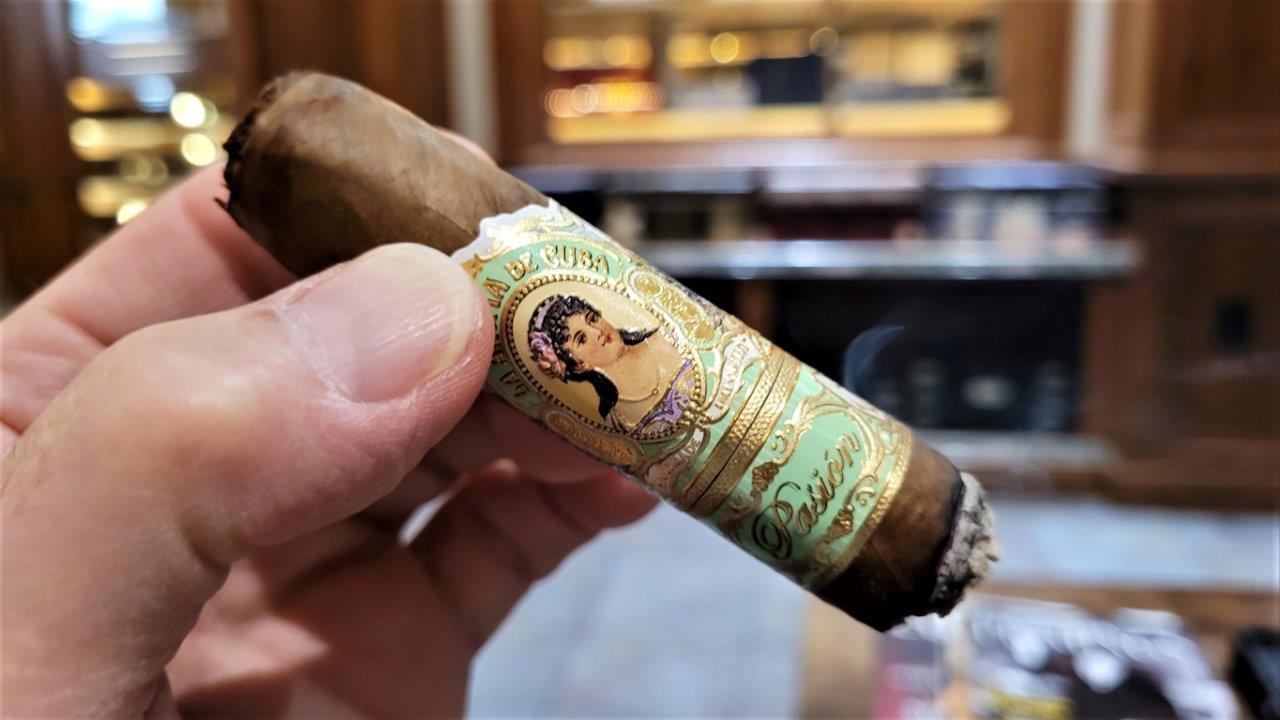 Don Pepin Garcia’s vision of the La Aroma de Cuba brand has been spot-on since he took over the line in 2008. I enjoyed the Pasión Robusto for its range of flavors, complexity, and medium to full body. It was smooth, balanced, chewy, and offered up the flavors that I generally look for in a cigar. Moreover, the shade grown Namanji wrapper adds the right amount of resonance to the core tobaccos, which was a big plus.

Suffice it to say… Just about any cigar smoker could smoke this cigar because it brings the joy on all counts. It never goes over the top on strength, it’s loaded with flavor, it can be smoked any time of day, and I feel that it’s well worth its price. Beyond that I’m adding the La Aroma de Cuba Pasión Robusto to my Best Cigars of 2021 list. 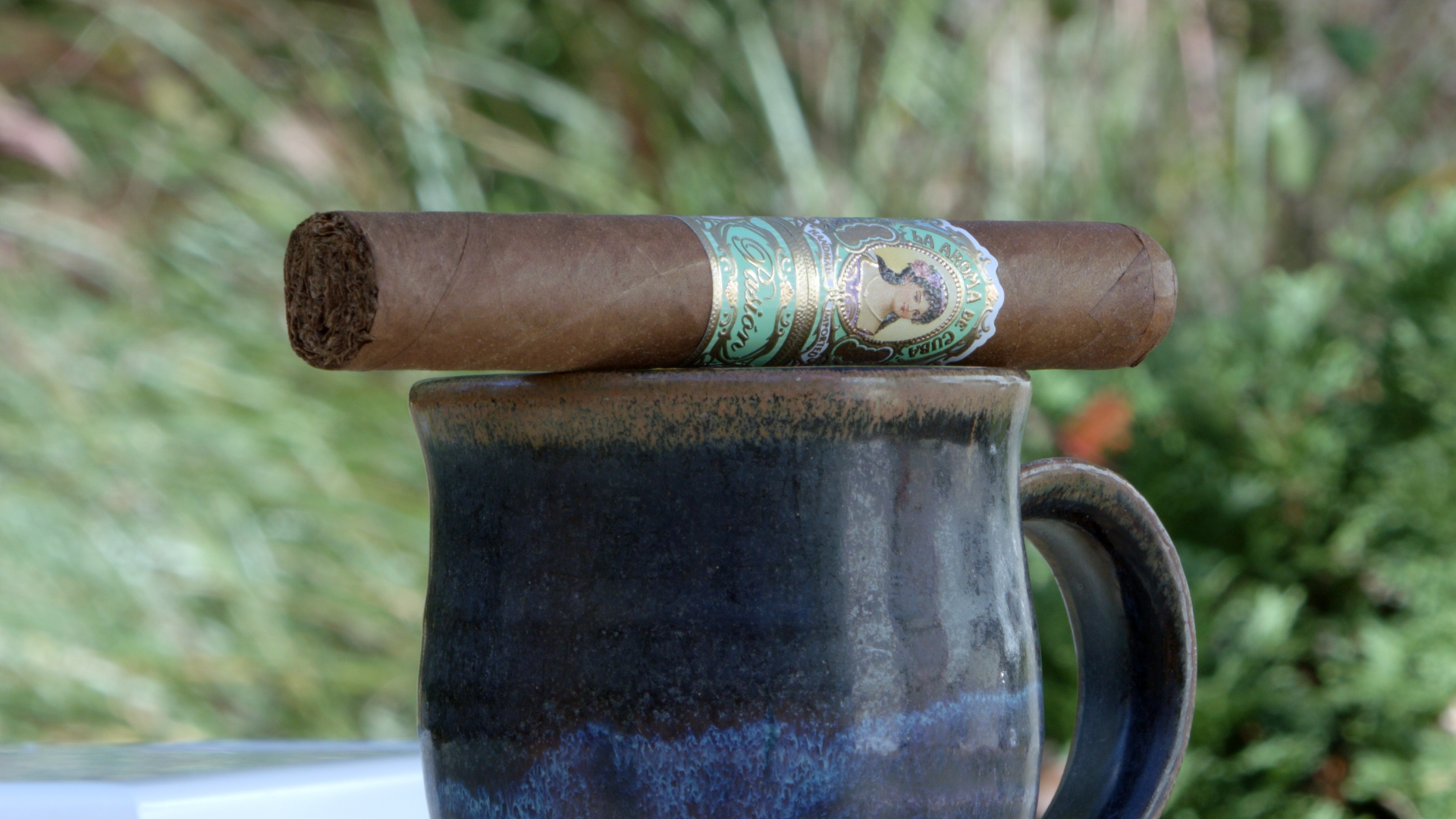 First, La Aroma de Cuba Pasion began as most Jose and Jaime Garcia blended cigars do—with those familiar Nicaraguan spice notes. What stood out to me—other than the meticulous construction and complex, layered, flavor profile—was how the Shade Grown wrapper from Namanji seemed to tame, maybe soften is a better word here, the hearty and robust Nicaraguan long fillers. The smoke was creamy both in texture and aroma and flavors included spice, cedar, molasses, leather, cashews, peppers, and smokiness. The strength starts at medium and builds to medium plus during the final third.

This is a great premium Nicaraguan puro that I’d place into the category of everyday special occasion cigar. Let me explain—this cigar, in performance and enjoyability, is worthy of special occasions, but it outperforms its price at a reasonable $10.00 for the Robusto. This is a no-brainer for fans of Jose and Jaime Garcia blends as well as those that prefer Nicaraguan cigars. More than that though—you should give the La Aroma de Cuba Pasion a try if you want to expand beyond medium-bodied and Dominican cigars.

Summary: Interesting flavors from La Aroma de Cuba Pasión’s all-Nicaraguan blend. Not at all what I would have expected, though I’m far from disappointed. The best reference I can give is that it tastes like a mix of Connecticut and Corojo – and it gives the best of both of those worlds in its flavors. 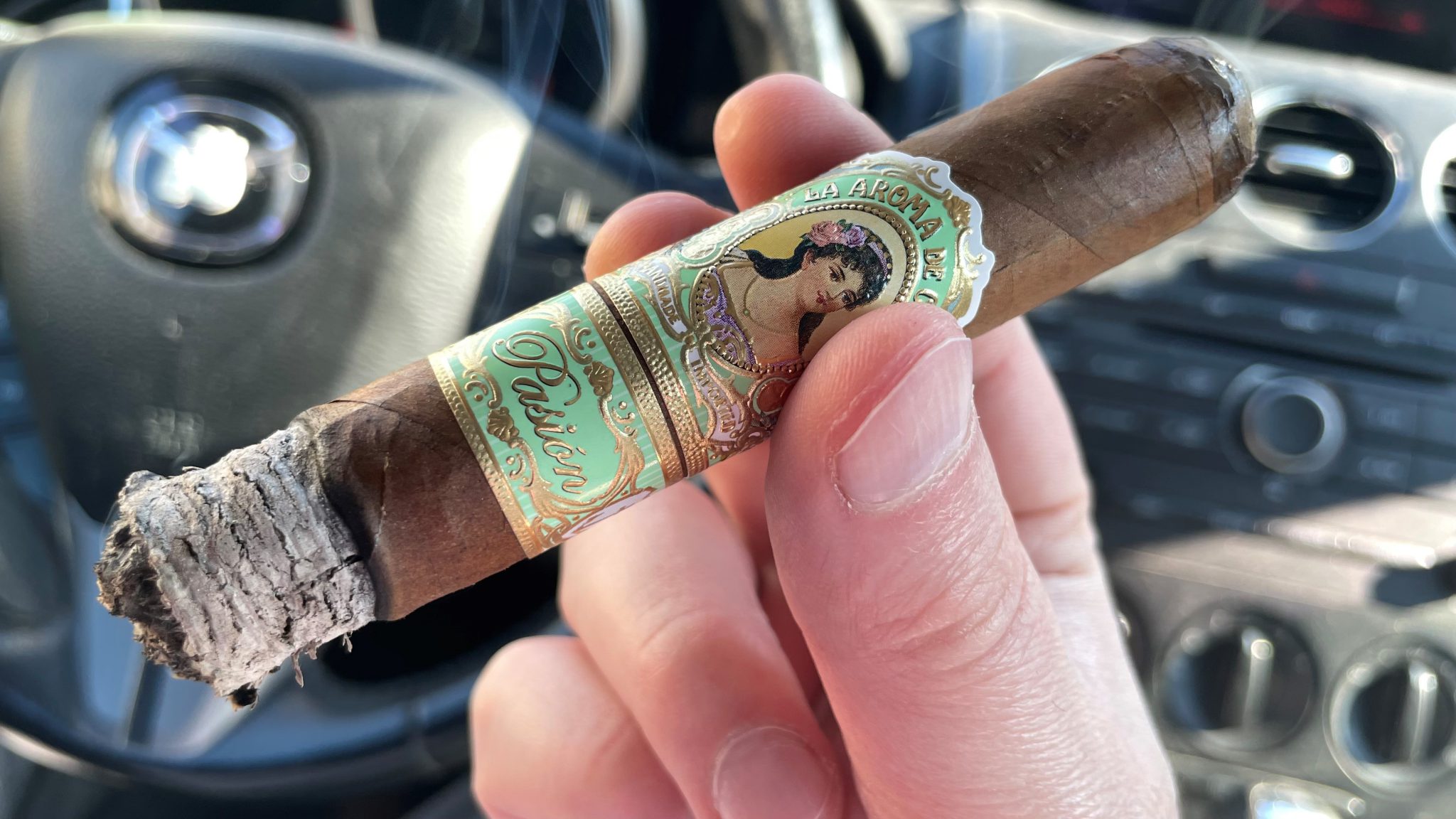 Up front, there’s a little bit of cedar and other dry wood flavors, and that’s most of what I get there. Later on, the flavors migrate toward a floral sweetness with some hints of orange peel, and the light sweetness Corojo normally exhibits. The floral notes are amplified through the nose, so if you like that kind of thing, make sure you retrohale it.

Toward the end of my cigar review session with Pasion, I noticed its smoke getting creamier. It had an almost velvety mouthfeel to the smoke. I felt like I could take a bite out of it and chew on it. Dense, thick, but not overstimulating to either the palate or nose. It just makes for a fantastic everyday smoke that won’t bore you or burn you out.

Summary: This La Aroma de Cuba Pasion is my first Garcia family cigar review since we took a look at their updated version of Manolo Quesada’s Fonseca by My Father. But rather than looking to the past here, the Garcias are one of the small group of cigarmakers who are putting forward a cigar with a shade-grown Nicaraguan wrapper. How much of a big deal is that? Judging by the more humbled spice in the Pasion’s profile, there’s something to it.

LADC Pasion is a more medium body, medium strength Nicaraguan puro; there’s still some spice, but it’s a mild-wings-kind of burn. Until halfway, anyway – at that point it lays down some serious bite, but even that finishes short. The biggest flavors happen in layers: the cocoa (which is sometimes sweet, sometimes not), the spice, the nuts, and occasionally a cedary tone. 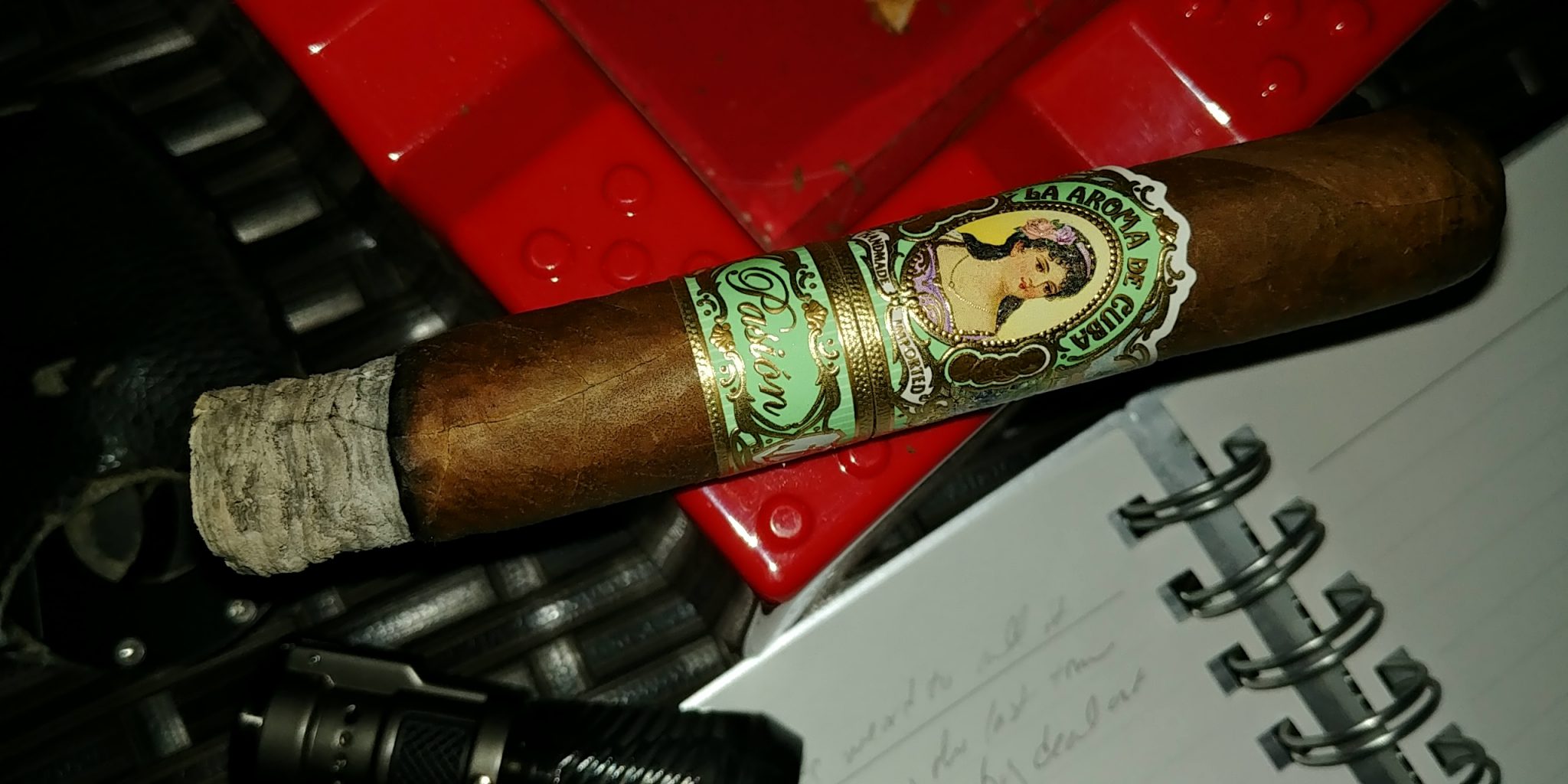 It sounds weird to call La Aroma de Cuba a “sleeper,” but really – when was the last time you heard somebody making a big noise out of something like Mi Amor? Not that it doesn’t deserve it – for reasons I can’t explain, I’ve always held La Aroma in my “special occasion cigar” spot.

A genuinely “nice smoke” and a wicked slow burner, La Aroma Pasion is generally more approachable in strength and flavor – so it appeals to a wider group of smokers, for sure. And that may be the push you need to add this La Aroma to the festivities during your next special occasion.