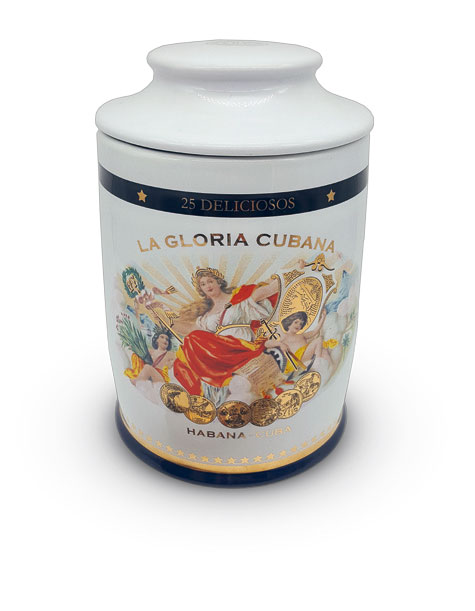 Although the first ceramic jars appeared on the market at the end of the 18th century, one jar in particular, commissioned in the 1920s by the royal tobacco factory of Partagás, can be considered a pioneer. We are talking, of course, about the legendary Talavera jar, made in Spain. Only 1,000 of these jars were made, numbered on the bottom as well as on the inside of the lid, which is what makes this production truly unique. In his work, An Illustraded Encyclopaedia of Post-Revolution Havana Cigars, Min Ron Nee describes these jars as genuine museum pieces, yet, despite numerous research attempts to date, there are no indications as to the cigars that were included in these jars. The hand-painted ornaments on the Talavera are simple and captivating at the same time. They are in light blue on the lids and light blue on a white background on the middle part of the jar. Furthermore, the saying “Fumando las penas van pasando y … si fumas PARTAGÁS nunca las tendras” (Smoking alleviates pain and … when you smoke PARTAGÁS you won’t ever have any) on the inner side of the Talavera jar. A few years ago, the artist Ramón Iglesias Centeno had 1,000 of the legendary Talavera jars post-produced by the master craftsman Carlos Pupalena Croffet, whereby each jar was respectively personalized according to customer wishes – truly something very special. As a result, between 1950 and 1970, two further jars were produced, one by the Partagás brand and the other by Ramon Allones as the Seville jar, because they came from the Pickman factory in Seville. The difference between both these productions is that, of the Talavera jars, only 1,000 numbered specimens were produced, while the Seville jars are not numbered, which is why the exact number of them is unknown. 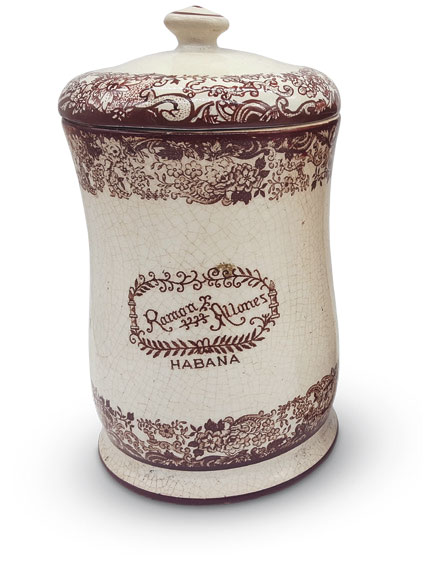 The latter was made in two editions, both painted brown. One of the series had a lid decorated with brown circles; the other was decorated with floral patterns both on the top as well as the middle part. The ornate brand logo was emblazoned on the front, while on the back, a tobacco plantation is shown with two campesinos (farmers). The official catalogs from the 1960s point out that inside the Seville jars produced in the Partagás factory were 25 Parejos; the format of the cigars of the Ramon Allones jars is, however, not known. For many years, new ceramic jars were made, but in 1996, the Spanish factory Bisadoa produced 1,000 numbered jars on the occasion of the 30th anniversary of the founding of the prestigious brand Cohiba. On the front of each jar is the brand’s 30th anniversary logo and on the lid is the gilded relief of a Taíno chieftain, the symbol of the Cohiba brand. These jars contain 25 Siglo Vs, which are additionally decorated with a wonderful jubilee cigar ring marking the 30th anniversary. During the millennium Festival de la Habana in 1999, three new ceramic jars were presented, respectively dedicated to the brands Cohiba, Montecristo and Cuaba, and likewise produced by the Spanish factory Bisadoa in an edition of 6,000 numbered specimens per brand, totaling 500,000 cigars. These jars were decorated with cigar formats, which for the respective brands represented absolute novelties: the Cohiba jars contained 25 Piramides, the Montecristo jars 25 Robustos and the Cuaba jars 25 Distinguidos – and all cigars were adorned with the special cigar ring that read “Millennium Reserve 2000.” Not until 10 years later, thanks to Habanos S.A. did a new jar come to the market, of which in 2009 5,000 unnumbered specimens were produced. It was an exclusive jar for Travel Retail, produced by the house of Byron and bearing the name Partagás Serie P No. 1. 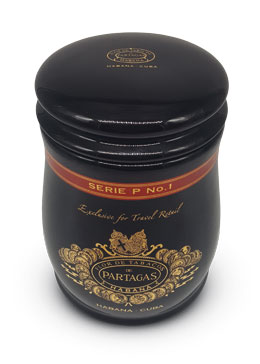 These black jars decorated with gold embellishments contained a new Vitola, namely the Partagás Serie P No. 1, a Petit Piramide with the measurements 127 mm x 50.
Also in the 2009 the fantastic jars by La Gloria Cubana were launched as the first regional production for Cuba. Two thousand numbered jars were manufactured, containing Deliciosos in the Hermosos No. 4 format, measuring 127 mm x 48. In addition to the classic cigar ring of the brand, this cigar also has a second ring, noting the regional product series “Exclusivo Cuba.” In 2011, the exquisite Bolívar Distinguido jars were issued exclusively for the Chinese market. Of these, 2,010 numbered specimens were produced to mark the anniversary of the 50-year diplomatic relationship between China and Cuba. These jars contain 25 cigars in a format never previously released by the brand Bolívar, a Distinguido, measuring 162 mm x 52. According to rumors, only 1,005 jars were supposed to have actually been released for retail, while the other half of the production was said to have been gifted to the diplomats from both countries. Should these rumors be true, these jars would be true collectors’ pieces. In 2012, a San Cristóbal jar was presented: 2,000 unnumbered jars contained a new Vitola called Torreon. This jar contained 25 Geniales, measuring 150 mm x 54. This production is also characterized by a special detail. The cigars from the first release only had the San Cristóbal cigar ring, but there are several of these jars that in the past few years also have a second cigar ring, which is dedicated to La Casa del Habano.