How Long Does Delta-8 High Last?


Delta-8 THC may be slowly gaining popularity among cannabis enthusiasts, but we must admit, it is still a pretty new compound in the cannabis market.

Much of its effects are still uncertain and under investigation by the scientific fraternity worldwide. So, questions about its effects, side effects, benefits, and safety are bound to crop up.

One of the questions we often encounter from people about this cannabinoid is: “How long do its effects last?”

Since the Delta-8 THC market primarily comprises marijuana, aka Delta-9, fan converts, they often ask whether these effects last as long as Delta-9 THC.

But the answer isn’t as simple as you may think. There’s really no one-word or a one-sentence answer to this question. Nevertheless, we will definitely try to answer it as precisely as possible.

The cannabinoids’ effects depend on numerous physiological factors, such as individual metabolism, body mass, age, gender, and tolerance level to the compound.

For instance, if an athletic person or a slim individual (blessed with a high metabolism) frequently consumes high doses of the compound, s/he would usually experience the effects of cannabinoids for a much shorter duration than a heavily built person with a weaker metabolic rate who may also be an occasional cannabis user.

The duration of effects may also vary according to the type of cannabinoid product consumed and its potency.

While the first is often beyond anyone’s control, the product type can be chosen by consumers. That is why we would tell a bit more about that in the next section.

Different D-8 Products & The Duration Of Their Effects

On average, the effects of cannabinoid products last for anything between 2-8 hours.

Now, that’s an enormous range. What could you figure from that? Right?

Also, this information is purely anecdotal, shared by consumers.

As we have already said, there’s hardly any scientific data to prove the effects of Delta-8 and their duration. Nevertheless, let’s try and answer the question as fairly as possible.

The time required by a cannabinoid product to take effect and the duration for which it will last depend on the way your body absorbs the compound. Products that need to be metabolized in the digestive system usually take longer to exhibit the compound’s effects than products that enter the bloodstream directly through the lungs or sublingual glands.

Delta-8 Gummies are partially absorbed by the mouth’s mucous membrane and sublingual glands. You don’t have to wait until they reach your stomach and the digestion process begins. Hence, gummies and hard candies may start taking effect within 15 to 30 minutes.

At the same time, the effects may wear off quickly, too, compared to some other edible products. Overall, the results may last for up to six to seven hours.

Now, cookies and capsules don’t work the same as gummies, though they are all edibles. That is because digestion of these edibles does not begin in your mouth, i.e., your mucous membrane.

These will start taking effect once they reach the stomach and the digestion process begins. So, it may take an hour or two for the cookies to begin taking effect.

However, the effects are likely to last for about eight hours, which is the maximum for Delta-8 products. Anecdotal evidence suggests that the effects peak around three to four hours after ingestion and slowly wear off after that.

Note: The effects of a 25mg Delta-8 cookie will be less intense than 25mg D-8 gummies, as the compound’s bioavailability reduces as it undergoes the first-pass effect in the digestive system.

Tinctures work in much the same way as gummies – in fact, more effectively so. They almost entirely get absorbed through the sublingual glands in your mouth.

The mouth’s mucous membranes and the sublingual glands absorb the oil, along with its cannabinoids, and the effects begin to show within 15 minutes to half an hour of consumption. The effects last for about three to five hours.

Vapes, dabs, and other products, consumed through inhalation, are the most preferred as they take effect in a jiffy. The inhaled cannabinoids enter the bloodstream through the lungs’ alveoli and start showing their effects at once (within 10 to 15 minutes).

However, The effects wear off faster as well, in about three to five hours!

Note: As we mentioned earlier, these durations are merely estimations. These numbers vary from person to person, depending on numerous individual physiological factors. A regular user will experience milder effects than a casual user, and the former’s effects are likely to wear off faster, too. Meanwhile, the body of a heavily built person will retain the cannabinoids for a longer period than someone whose metabolic rate is higher and body mass lower. 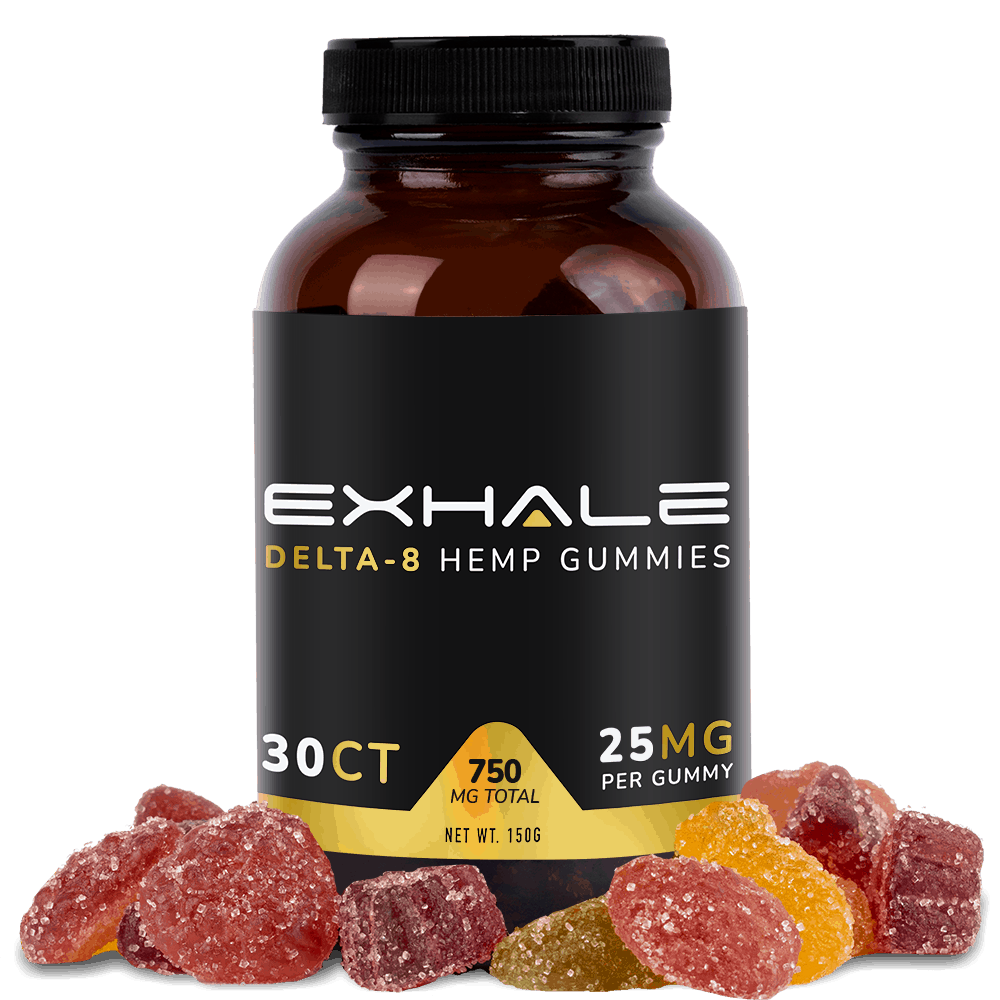 There is barely any research literature to precisely pinpoint the specific effects Delta-8 THC can have on your body (and mind). Most people would vouch for its mild euphoric effects. However, most anecdotal evidence indicates that the high D-8 causes are much weaker in potency than Delta-9 THC – the main psychotropic component of marijuana.

Yes, Delta-8, being a form of tetrahydrocannabinol (THC), is indeed psychotropic. Unlike cannabidiol (CBD), THC of any variation would bind with the CB1 receptors of our brain and induce a euphoric experience.

All THCs have similar properties that it owes to their similar structures. However, there is still a slight difference in the specific positioning of the C=C double bonds. In the Delta-9 variant of THC, the double bond is present in the ninth position of the carbon chain, whereas, in Delta-8 THC, it is in the eighth position of the chain. This slight variation makes their properties, and thereby their effects, slightly dissimilar.

For one, Delta-8 THC does not cause the unwanted side effects of Delta-9, such as paranoia, hallucinations, and other symptoms of psychosis. Delta-8 THC is known to produce a mild high, which is colloquially called a happy high or a buzz. It will give you a heady, euphoric feeling – almost like Delta-9 THC, but to a much lower degree and without the side effects.

Secondly, Delta-8, being a milder variant, the other typical benefits of THC may be more efficiently utilized.

Although few studies have, so far, been conducted on Delta-8 THC, we will try to elaborate on the few available ones.

However, this is merely the beginning of what we expect would become a part of a much larger body of scientific research in the coming days.

While research continues on this newly discovered cannabinoid, we believe that a deeper investigation is required to establish the exact effects and duration on human beings (and pets, too, since that will eventually become another requirement).

While consumers claim that with Delta-8, they seem to experience all the great effects that are generally associated with CBD and medical cannabis, it is still uncertain how far is true. Experiences and feelings are relative. No two human beings experience pain or anxiety with the same intensity or in the same way.

However, the positive thing about the current research findings is that no significant side effects or harmful effects of Delta-8 THC have, so far, been found during their studies.

But do remember not to consume too much of Delta-8 too soon. If you overdose, you may encounter the same kind of side effects as marijuana. Even though those side effects would be milder, there is really no point in tasting a sour apple when you can have the sweet one. Right?

How Long Does Delta-8 Stay In The Body?

Like all THCs, the metabolites of Delta-8 THC stay in the body for quite a long time. If you follow meticulous detox methods, you could successfully flush them out faster. If you don’t, these metabolites can remain in your body for months.

These metabolites tend to remain the longest in your hair follicles, i.e., for up to four months. Your blood will retain traces of THC for about two months, whereas the saliva usually contains it for up to a week.

Then again, these are approximate figures. These tend to vary, as we mentioned earlier.

Will Delta-8 Show Up On A Drug Test?

Unfortunately, yes. Despite all its extraordinary properties, Delta-8 THC is still a “THC”, and it can mark you as positive on a drug test.

But why, you may ask. The US federal laws have deemed the sale and use of Delta-8 THC as legal (even though some states refuse to recognize that!).

The reason for this strange and apparent discrepancy is that both THCs break down to similar-looking metabolites in the human body. Since the drug tests are designed only to look for THC metabolites in the body and not differentiate among their sources, the lab will mark you ‘positive’ on the test.

How long a test can detect THC metabolites in your system depends on the test type you are taking and the compound’s concentration in your body.

If you are a heavy user, the duration may increase. However, if your metabolism is higher, the probability of it getting flushed out of the body faster increases as well.

How To Get The Best Out Of Delta-8 THC

So, how will you make sure that you get the most effective Delta-8 products that will give you long-lasting potent effects?

After all, Delta-8 products do not come cheap.

The safe extraction process of CBD is tedious, and it is then converted to Delta-8. This elaborate procedure makes the cannabinoid expensive. So, you must make sure that you get something worth your money.

Check the source of hemp and the extraction method. Hemp grown in the US and the EU is the most reliable because the farming practices are well-monitored.

The CO2 extraction method is the best in the industry.

Also, look for third-party lab-test reports to make sure that the cannabinoid profile matches the product description. The Delta-9 THC content should be less than 0.3%.

Look for the strength of the product. If you are a newbie, start with the lowest dose possible. For example, start with half a gummy or one puff of the vape. Study the effects that you experience and increase the dosage accordingly.

The last thing you’d want is to OD on something.

Also, do not operate heavy machinery or drive after consuming Delta-8.

Be safe and keep others safe, too.

Ask An Ex: Inspiring Veteran Mike Miller Shares How He Quit Smoking after 50+ Years with the CBQ Method + Helpful Tips You Can Use