Home » Cigar » How do you Toast a Cigar?
Cigar

How do you Toast a Cigar?

1. Hold the foot near the flame to warm it up and slightly blacken the tobacco at the opening, particularly around the outer rim.

2. Once there’s an even “char” on the foot, it’s now time to light the remaining tobacco in such a way to create an even, orange glow or“cherry.” As the filler doesn’t need as much heat as the binder and wrapper, there’s no need for the flame to actually come into contact with the cigar. The flame is hottest at the tip, so it can be held several centimeters away from the foot and still produce enough heat to burn. To ensure that the burn is even, rotating the cigar while executing this process is recommended.

3. With the cigar now toasted and started evenly, the best part of your experience can now begin – enjoying and smoking your cigar like the enthusiast you are.

For some, lighting a cigar is like a ritual, and it’s during this time that you prepare your cigar for what’s to come. From sizing it up, to determining what cut will work best 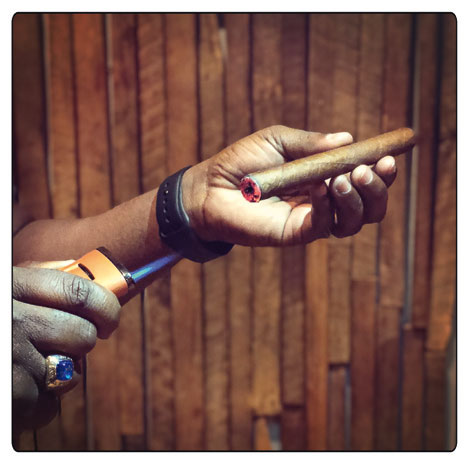 for the shape and size, the pre-lighting ceremony is just as critical to how the cigar performs as the smoking itself. When a cigar is properly toasted, the chances for cigar malfunctions such as canoeing (middle burning too fast) and tunneling (sides burning too quickly), are drastically decreased. With these malfunctions eliminated, one can simply focus on the marriage of flavor and smoke as the manufacturer intended. This is also the moment that the tobacco is warmed and “awakened” and prepared for consumption.

WHY SHOULD A CIGAR BE TOASTED?
Toasting warms all three levels of the leaf (filler, binder and wrapper), primarily the binder and wrapper. The filler tobacco is not only composed of ligero tobacco, which doesn’t burn as well, but also volado leaf, the lower priming on the plant that has little to no flavor and is used for its burning quality. It’s grown to burn, so it will, and at a faster rate than the binder and wrapper. Toasting gives the outer two levels a bit of a head start on the inner. When the tobaccos are burning simultaneously, flavors are enhanced and they work in harmony, where no one side or layer burns faster or hotter than another.
Cigar expert Michael Herklots travels all over the US conducting cigar blending and tasting workshops. This is his take on the practice of toasting: “Firstly, first I believe it allows you to stop, slow down and embrace the ritual. Secondly, it allows you to light the cigar with low to moderate heat while having more control over the flame as it contacts the foot (open end of the cigar). When done properly, it does not require any puffing, so you don’t draw the heat of the flame into the cigar. Finally, proper toasting allows you to light a cigar for a guest, customer or friend…which is a truly elevated level of service.”