I’m here today with my very first review for Hellvape and am rather excited to have been chosen to do reviews for them. I feel like they make quality products and in my experience so far the customer service is top notch. I purchased an Arez 120 that had an issue and they replaced it for me and the customer service was very responsive and quick to respond. However, I’m not going to be talking about the Arez today but rather a new MTL/RDL tank that was sent to me by Hellvape for this review. This new tank is the Launcher Mini tank that is a cooperation between Hellvape and Wirice. I found out through research that there was a standard sized Launcher tank but knew nothing about it prior to this. The Launcher Mini has some really interesting features that I think might appeal to many people. It is 23mm in diameter and holds 3ml of liquid which is a really good amount for an MTL tank that will also do RDL. 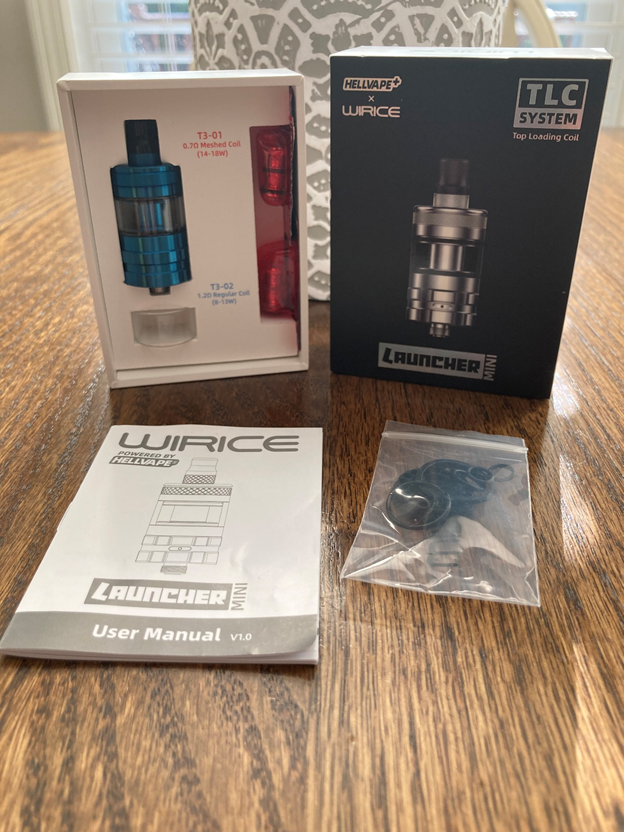 I was fortunate that Hellvape sent not one but two of the Launcher Mini tanks along with a couple boxes of coils for the review. This really makes it good so I can try one of each different coil in each of the tanks at the same time with different flavors. The two colors I received are blue and gold.

The packaging for the Launcher Mini is a two part box that the lid is very tight on but once opened exposes the tank, spare straight glass, and coils with the spare parts kit and user manual underneath.

Like I mentioned earlier, I was unfamiliar with the original Launcher tank so this was all new to me. It’s really nice as a reviewer to receive a tank or device that is truly an interesting design like this tank is.

On the top is a 510 drip tip but the included tip has a piece that sticks out on the bottom that locks into the base of the knurled part that stands higher than the top cap of the tank. The reason for this is that knurled part unscrews so that the coil can be loaded from the top. Yes, you heard that correctly. The coil loads from the top that they conveniently call TLC (Top Loading Coil feature). 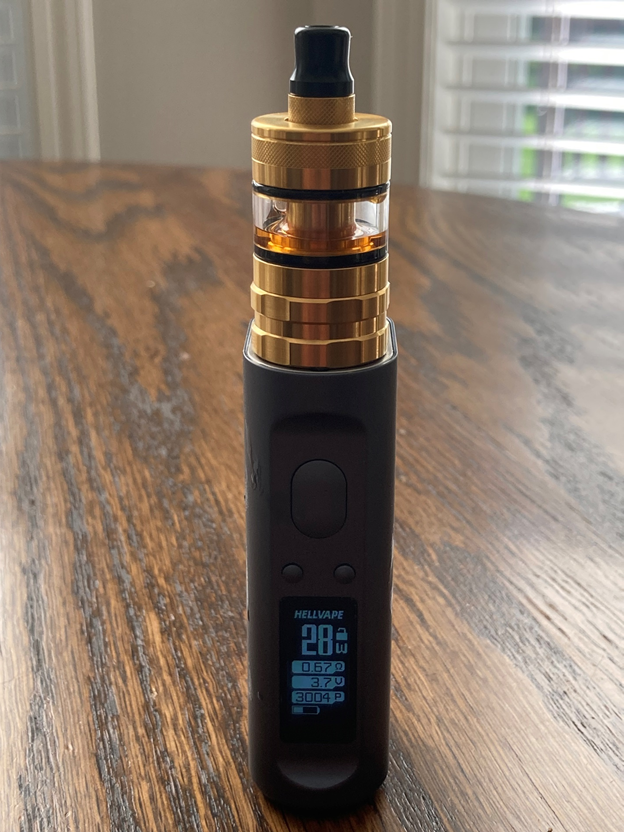 Once the tip and knurled piece are unthreaded, the coil is inserted with the smaller part going in first and the bottom of the coil facing up. The inside of the tank is spring loaded so a little pressure is needed when inserting and threading in the knurled piece that holds the tip. With this design it allows the user to quickly load or change a coil with the tank full and no mess. If you do it right then you can get the coil to “launch” out of the tank into a waste can. 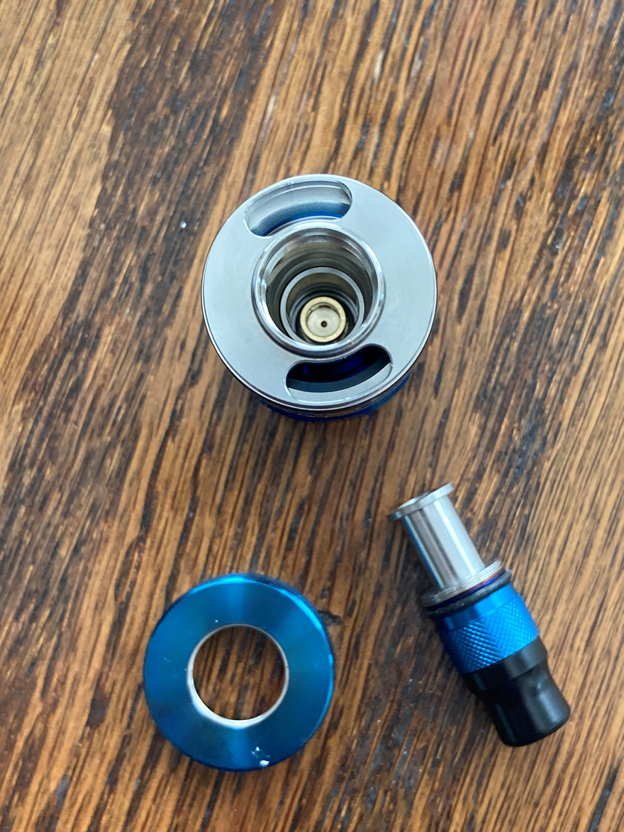 Below is a picture of the top of the tank with a coil inserted. The tank can be completely turned upside down without any leakage as long as the top cap is in place. The coil is inserted with the bottom of the coil facing up. 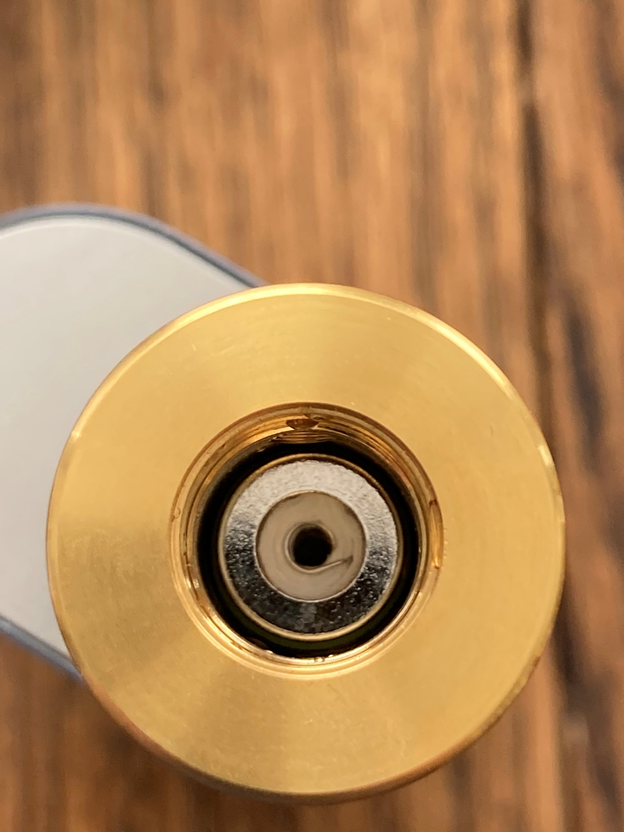 Normally the top cap of a tank is all one piece but the center knurled part is separate from the top cap. The outer edge of the top cap is also knurled to help get a better grip for removing. Once you remove this cap then you find the two fairly large fill ports that I was able to easily fill with a glass dropper without making any mess. On the bottom side of the top cap is a black seal and there is also an extra seal included in the spare parts package. The top cap is threaded rather than the ¼ turn that we have become accustomed to on many tanks. 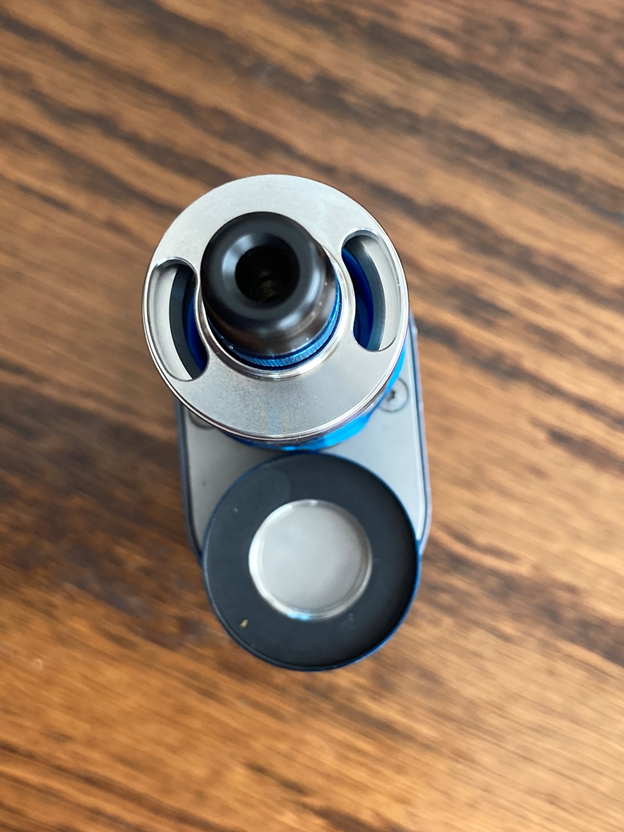 The Launcher Mini is a bottom airflow tank and it has a good assortment of airflow openings to fit anything from a tight MTL to a nice RDL. There are four different airflow holes and one larger slotted hole for RDL. The available smaller holes are .8mm, 1.0mm, 1.2mm, and 1.5mm. I personally preferred the larger airflow slot open for RDL with the .7 ohm mesh coil and the single 1.5mm opening for the 1.2 ohm round wire coil. The airflow ring is easy to get a grip on due to the flats on the base and moves freely but not so freely as to allow it to turn on accident. Below is a picture of the slotted airflow hole completely open. 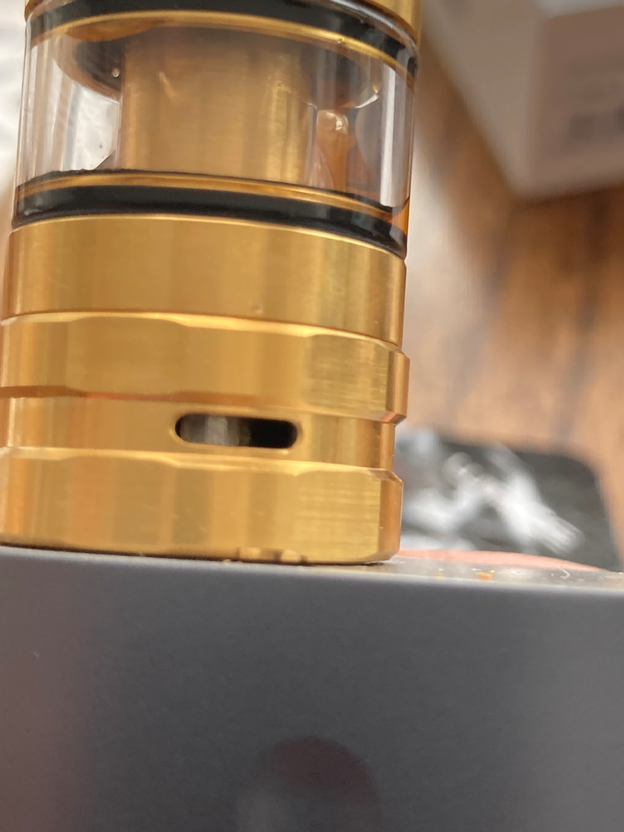 The Launcher Mini can be easily disassembled for cleaning which I like to do with any tank before using it. 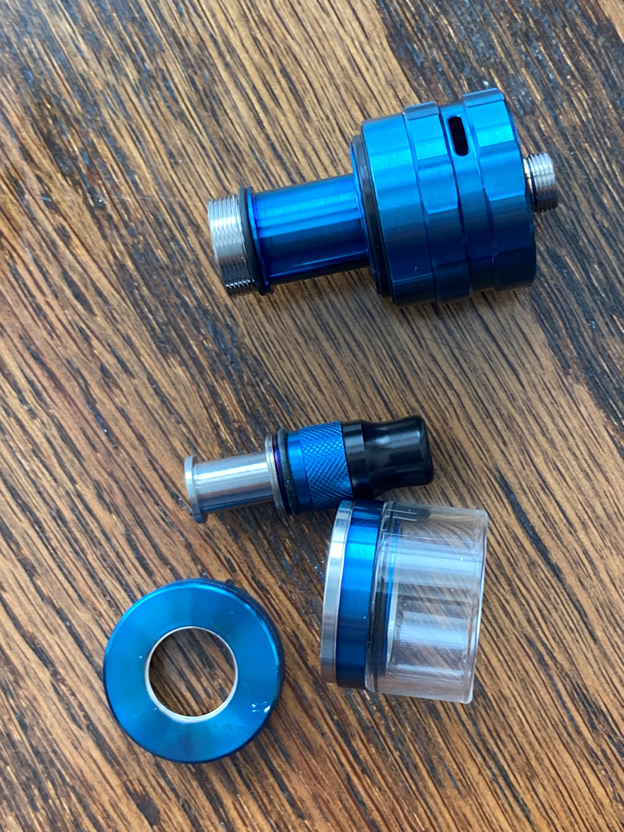 There are two coils included in the kit. One is a .7 ohm mesh coil that delivers very good flavor in my opinion and a 1.2 ohm round wire coil that is targeted more for MTL use but I was able to run it with the wide airflow slot open. The .7 ohm coil is rated for 14-18 watts and the 1.2 ohm coil is rated for 8-13 watts. I felt like both coils performed well for their intended use. I liked the .7 coil at 17 watts and the 1.2 coil at 11 watts. The coils are fairly small and it’s good that the o rings are different colors for the different resistances. The green are the 1.2 and the black are the .7. 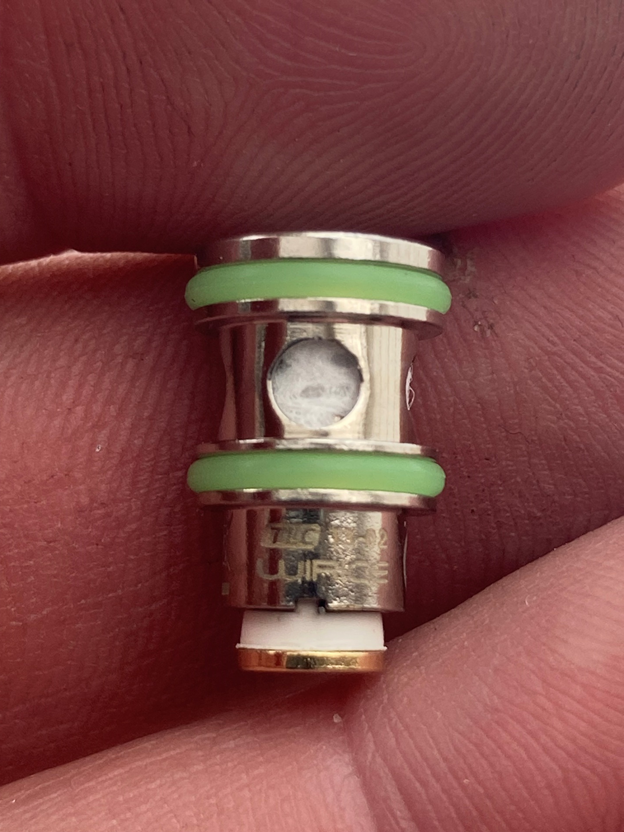 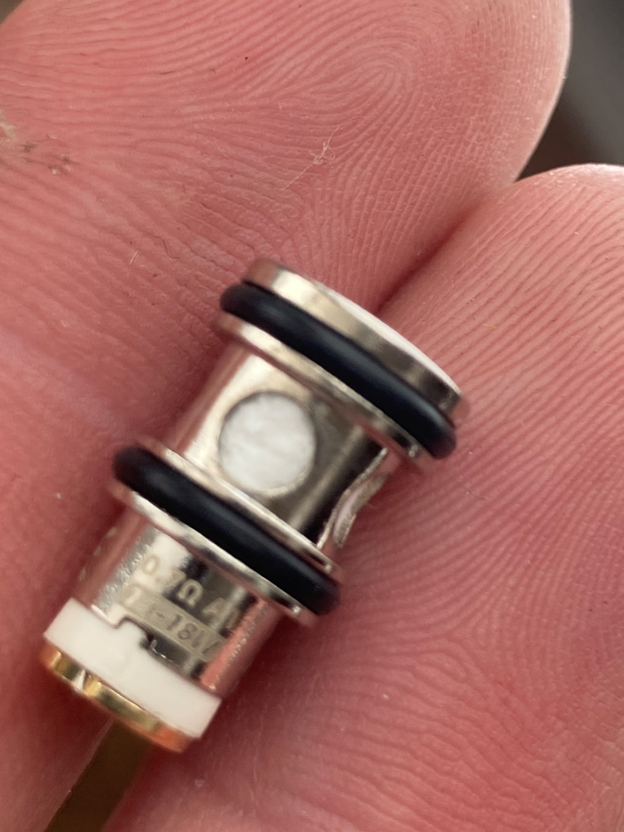 I have to hand it to Hellvape on the Launcher Mini tank. I think it’s a really interesting designed and well executed tank. I very much like that the coils can be changed without having to dump the tank or get your hands messy.

The fill ports on the Mini are plenty big and the 3ml capacity I think is a good fit for a 23mm tank like this. I felt like both of the coils gave good flavor and lasted through several refills of the tank. I didn’t count how many fills but am still using the original coils that I started with in each of the two tanks.

The airflow adjustment having the large slot for RDL and four different sized holes that should fit most people’s airflow resistance needs was well thought out. Also being able to easily grab the flats of the bottom to quickly adjust the airflow is a plus.

All of the threads on the tanks were very smooth and the only thing I can really think of that could possibly be a negative on this tank is the knurled tip holder/coil retainer that sits raised above the top of the tank. Some people might not like that wider 510 drip tips might stick out on the side. To me it’s not a big deal because I really like the tip that comes with it and I do have other straight 510 tips that I could use if I chose to.

I’d like to than Hellvape and Cara for sending the two Hellvape X Wirice Launcher Mini tanks for this review. As always, thank you to the readers for taking the time out of your schedules to read my reviews. Below is a link to the website if you would like to see more. 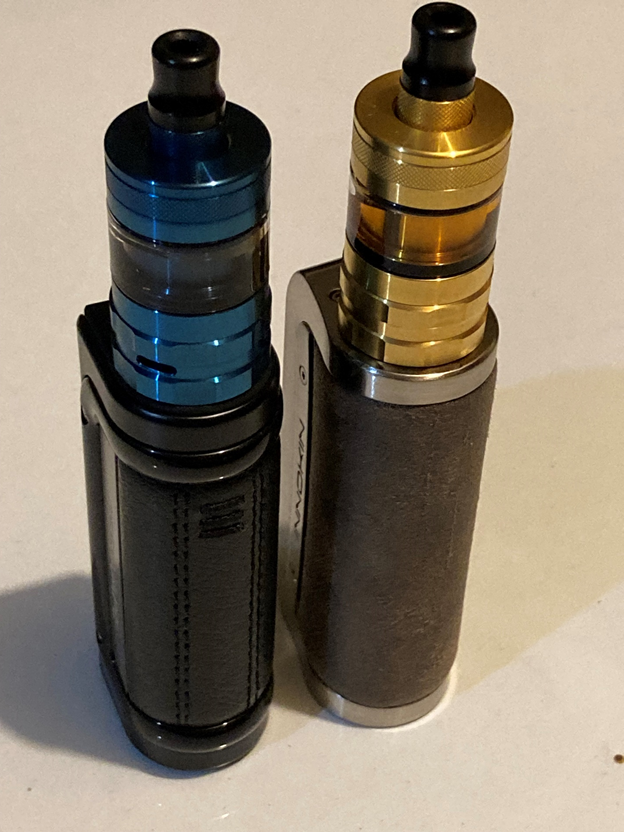