Hello again and welcome back for today’s review of the Marvos S Kit from Freemax. The Marvos S is the newest evolution in the Marvos lineup and I think the best looking as well. This is a single 18650 device with a power range of 5-80 watts, and offering 3 power modes being POWER, SMART and BYPASS. The kit includes the Marvos DL Pod but instead of connecting directly to the device magnetically as past Marvos did it now connects magnetically to a adaptor that screws into a 510 connection of the device. With the 510 connection you now have a choice to use other tanks on this device. Without further hesitation lets check this kit out. 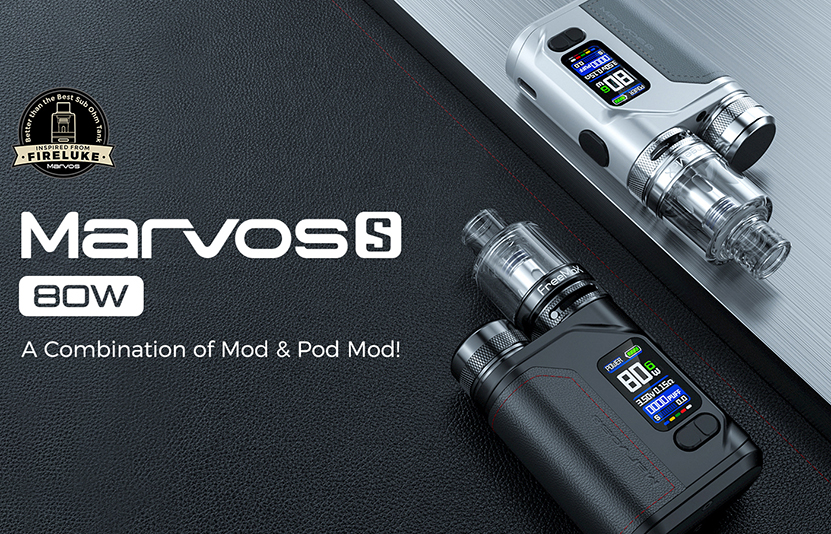 INCLUDED WITH THE KIT 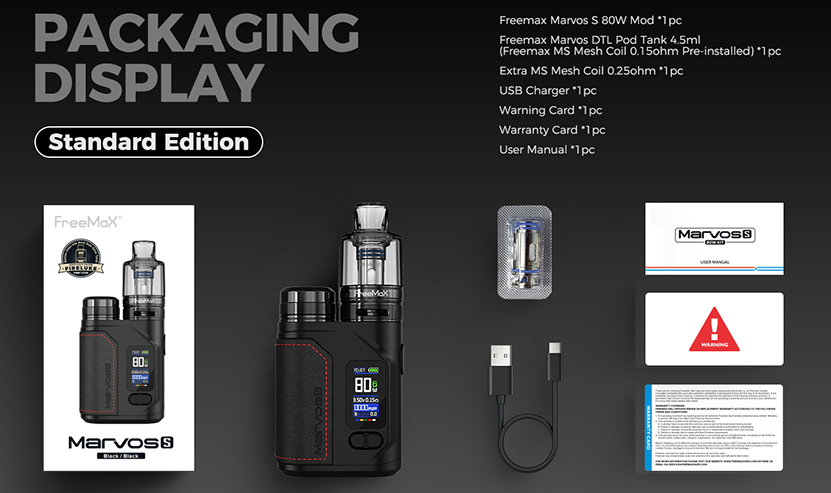 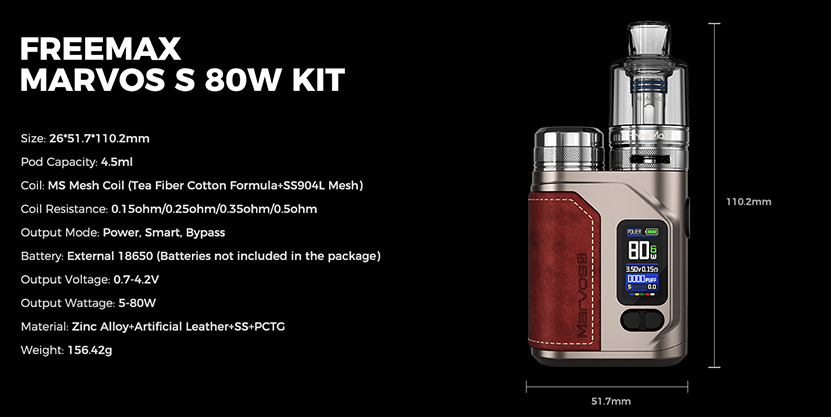 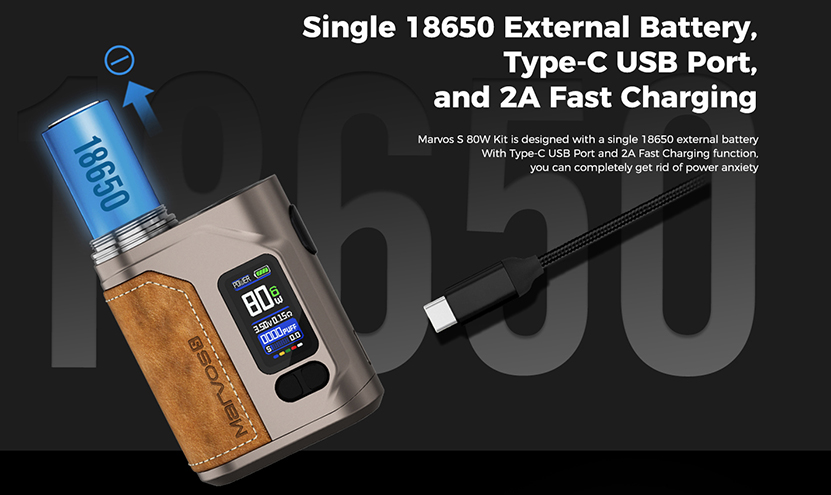 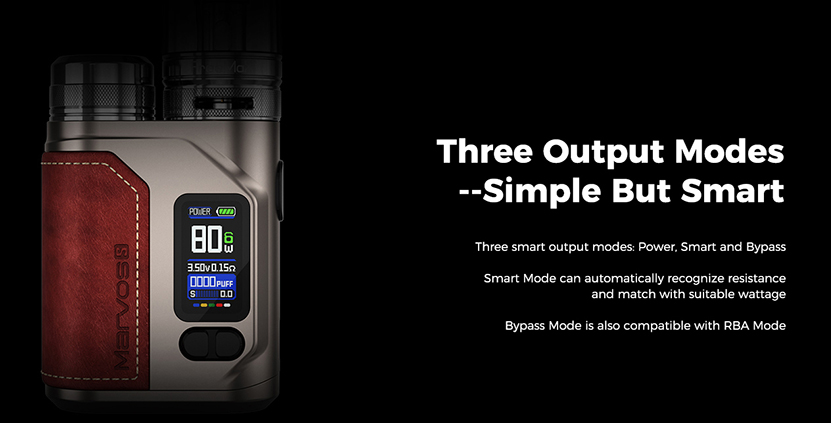 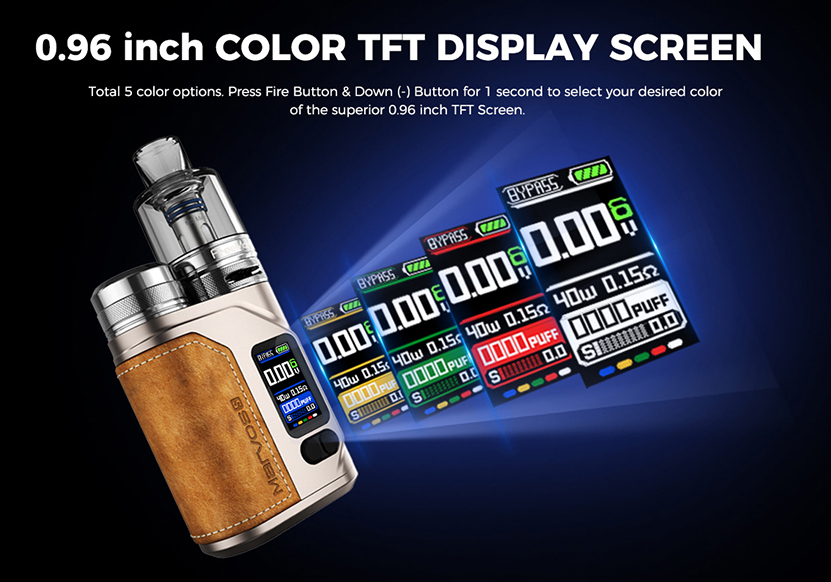 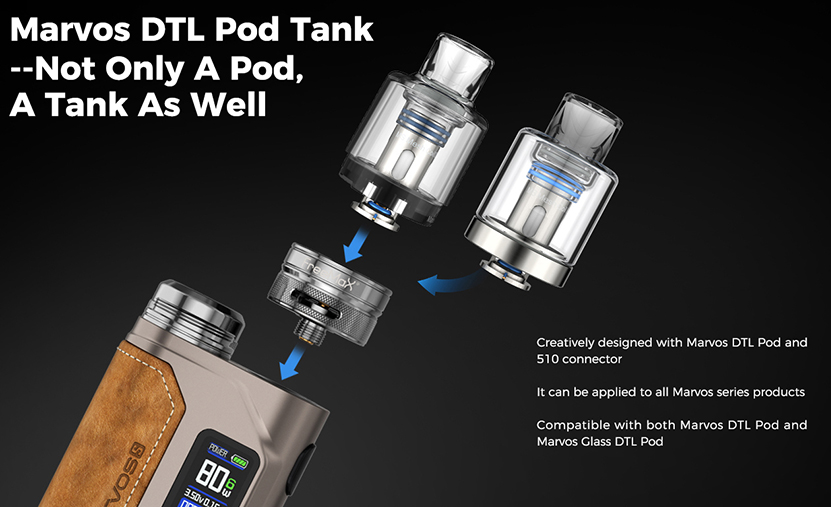 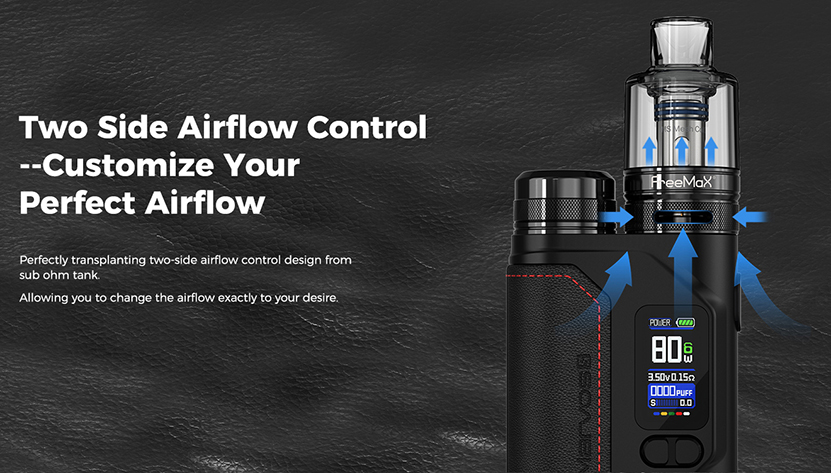 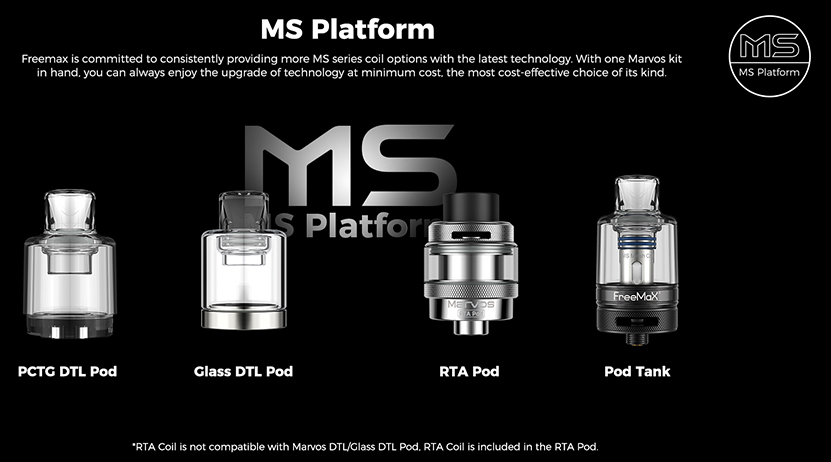 The packaging of the Marvos S Kit is done as most company’s do with a inner box that slides out of a outer sleeve, inside the box the Marvos S rest in a foam cutout with the pod and 510 adapter already installed om the device. Under the device are your extra coil ( 0.25Ω ) charge cord, user manual, warning card, first batch card and warranty card. The 0.15Ω coil is shipped out pre-installed in the pod.

The moment I saw the device I started to smile, this is a really attractive device blending leather and metal for a very classy appearance. The Marvos S has a 510 connection on one side of the top plate above the fire/power button.

I really thought the device would have a lot of heft to it but at 156.43g it’s fairly lightweight. Freemax did a great job on the imitation leather, it feels real and is very soft with some cushioning to it. 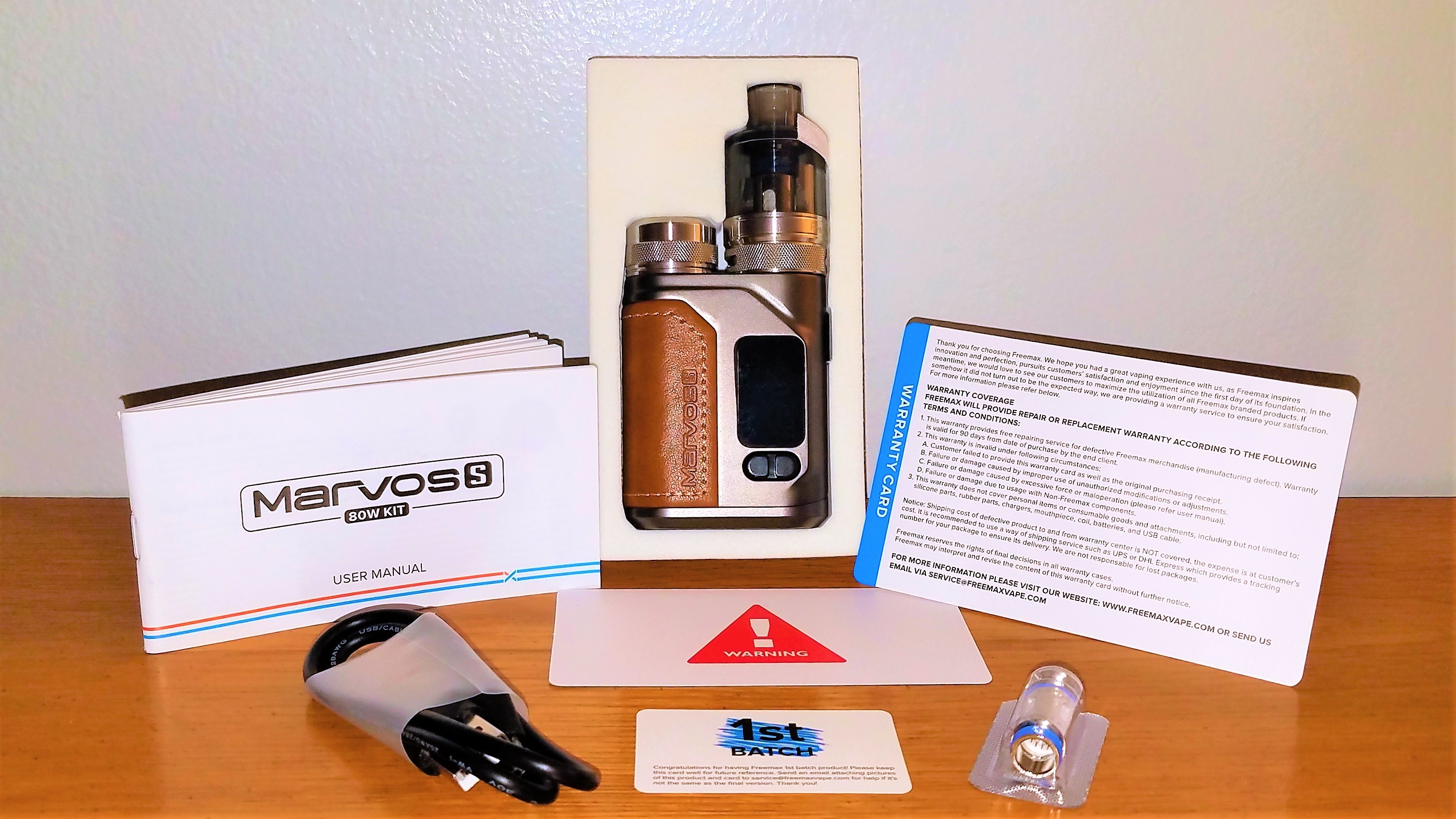 The kit consists of 3 major components- Mod, 510Adapter, Pod/Tank that I have laid out minus the replaceable drip tip, I used the stock drip tip while testing this kit finding no need to put one of my own on because it works fine and is comfortable to use.

I also like that it matches the pod/tank and speaking of matching having the knurling of the 510 adapter and battery cap really dress this kit up. The 510 adapter has the name Freemax stamped on it and is only 1 of 2 locations of the whole kit with the Freemax name on it while the name of the device is embossed in the leather next to the display screen. Branding was kept to a minimum. 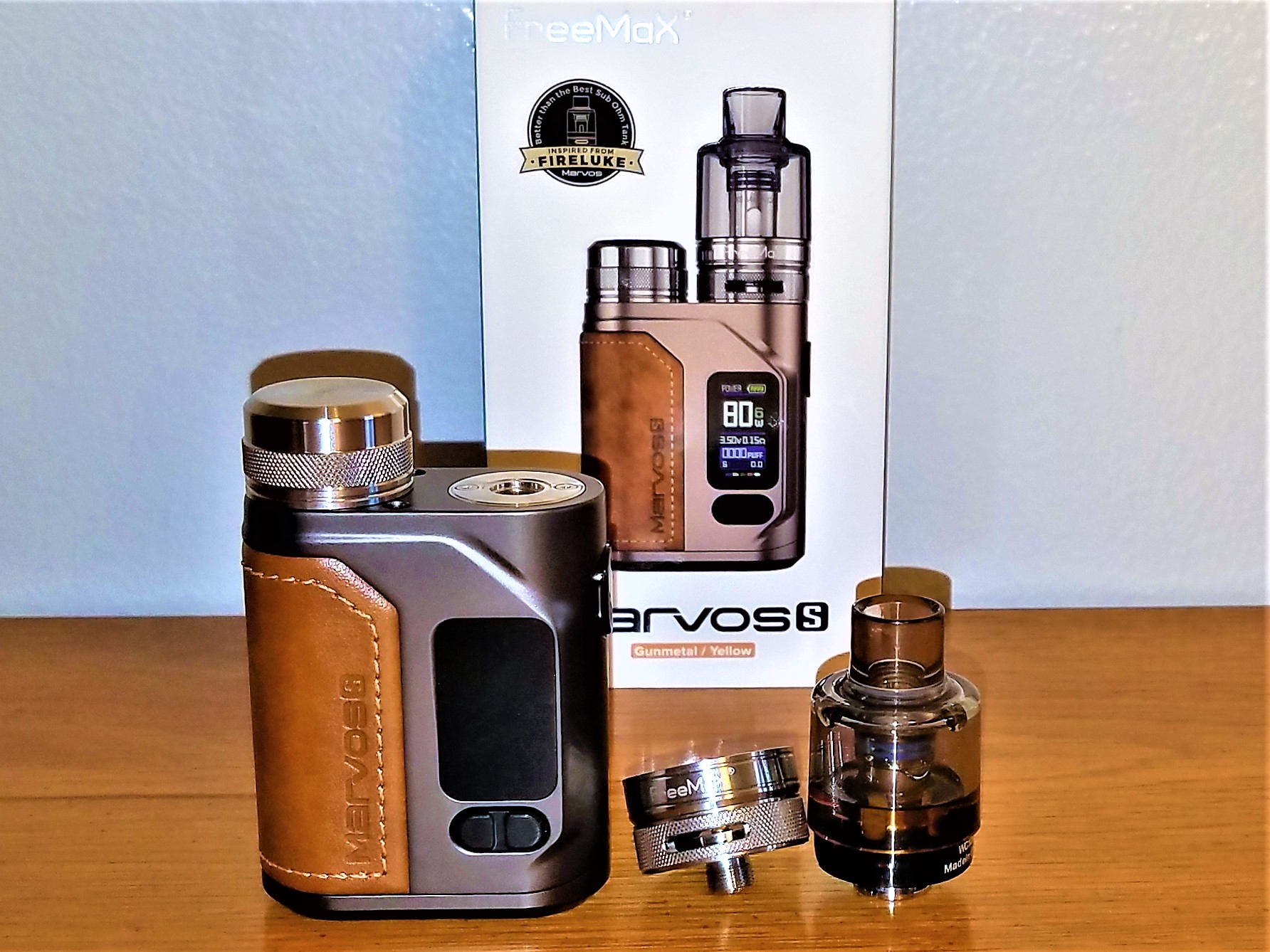 With the pod/tank laid down on it’s side showing the 4 magnets that connect inside the 510 adapter that’s already connected to the Marvos S laying on it’s side with the battery cap screwed on, the fill port of the pod/tank is on the bottom with a plug that has Freemax stamped on it. 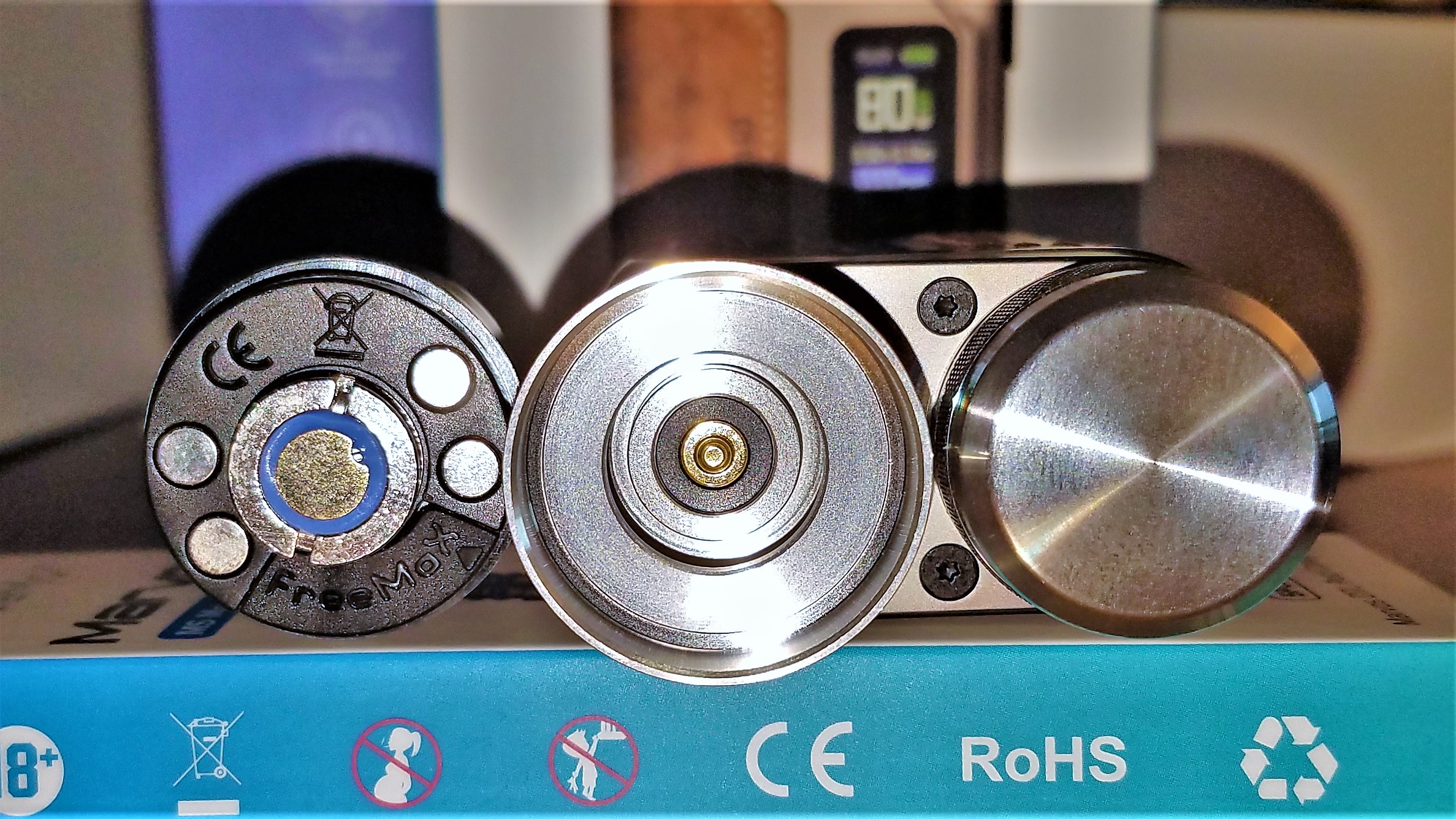 The bottom plate of the device has 3 ventilation holes in case a battery problem occurs, the plate sits flat with no wobble on any flat surface. Freemax is stamped on the plate and it’s the only spot on the device that has the Freemax name keeping a very clean classy look to the device itself. 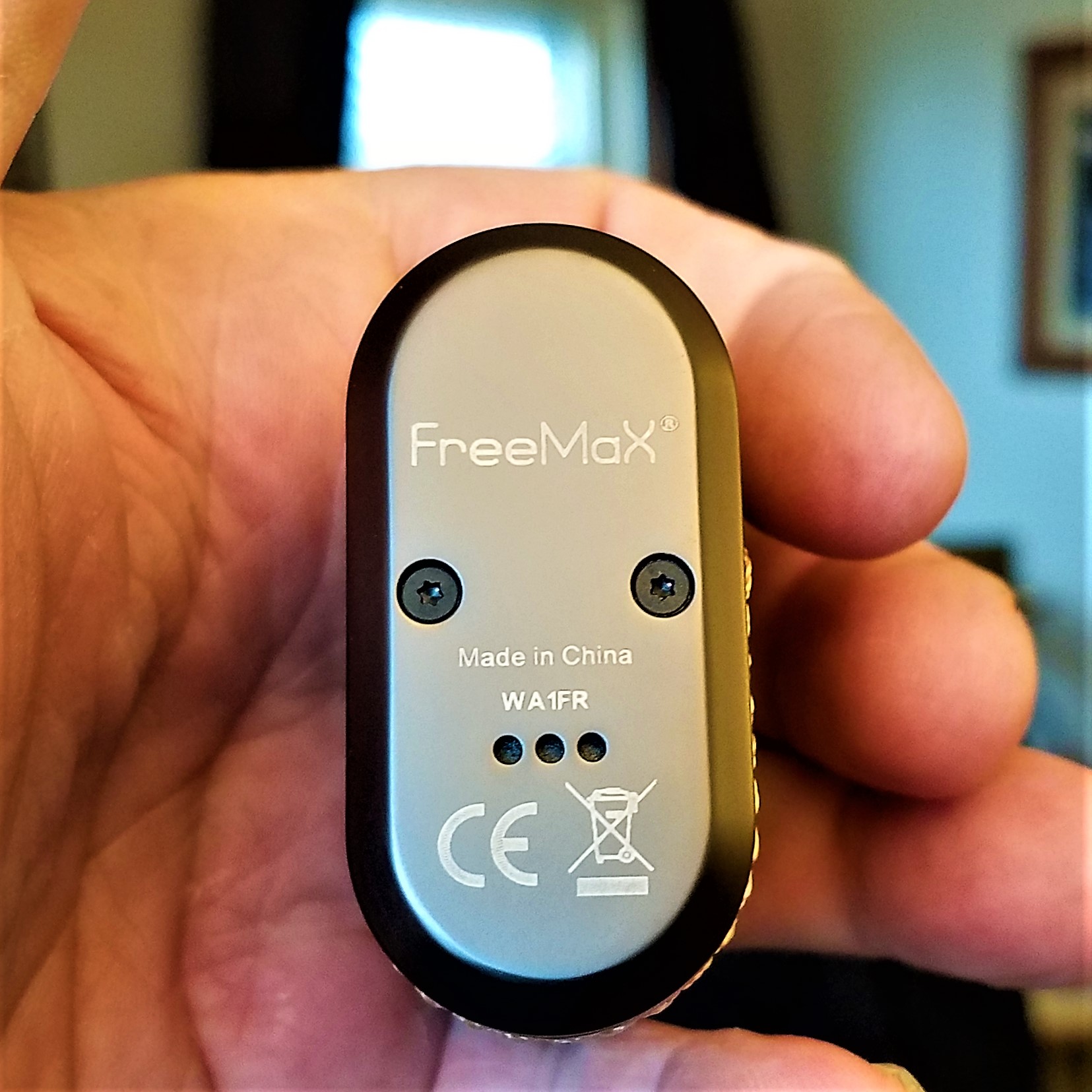 The 510 pin is spring loaded with a nice throw of travel to it in case one wanted to use different atomizers on it, most 25mm atomizers with bubble glass will fit easily but 26mm with bubble glass is iffy depending on the atomizer. When any atomizer is connected there is a small gap between the top plate and atomizer base but not very noticeable.

Correct battery polarity is clearly marked with a red plus symbol inside the battery tube but there is no marking of minus on the battery cap though. 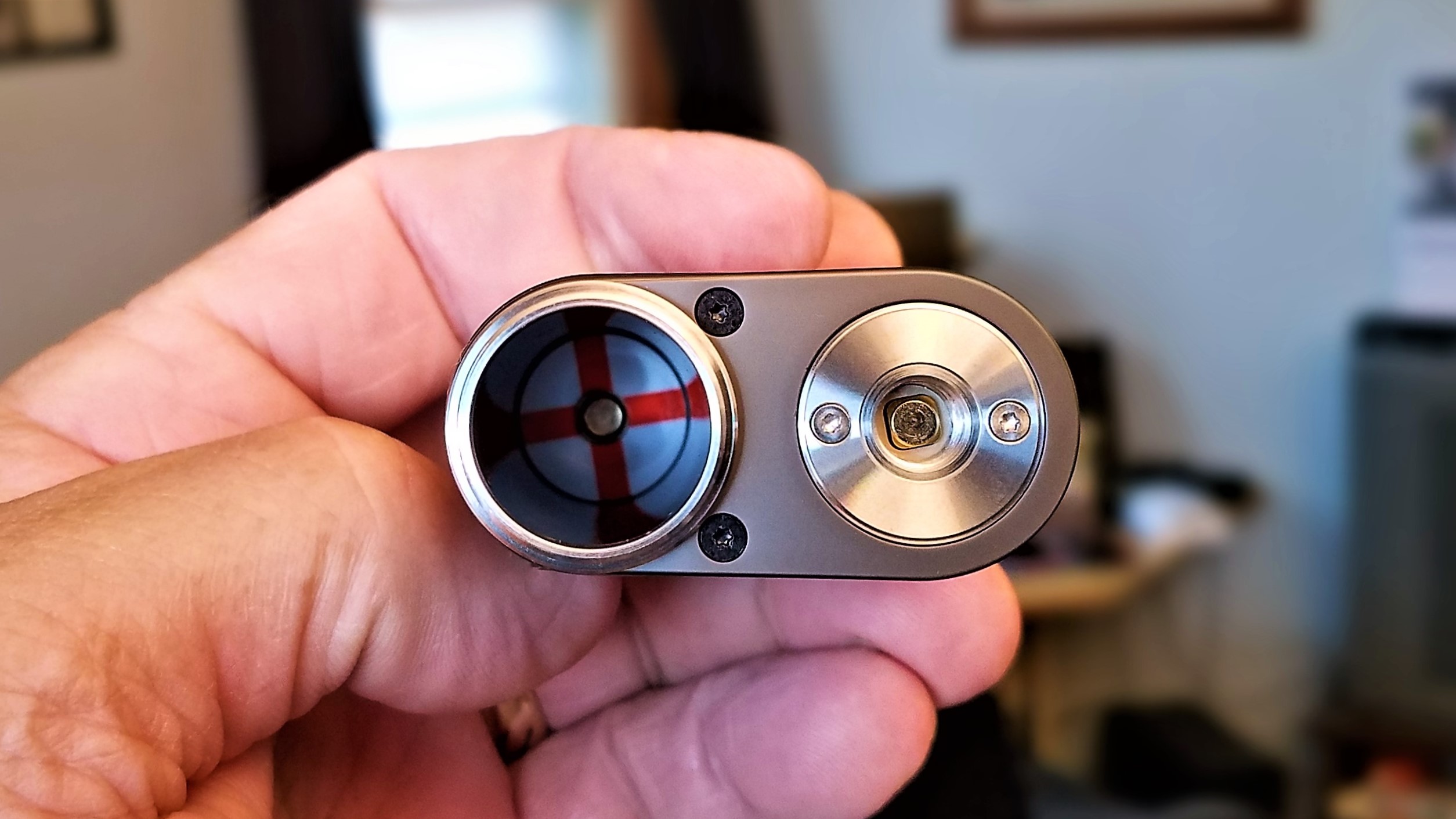 Having a large fire/power button on a device of this size is a big plus making it easy to find/feel when beginning your vape and the Marvos S has a nice sized button on the unwrapped side of the device at the top.

I can fire the device very comfortably using my finger, thumb or the upper palm of my hand, every firing position works very well and the hand fit is great ergonomically speaking. Connection of the charge cord is below the fire/power button at the bottom. 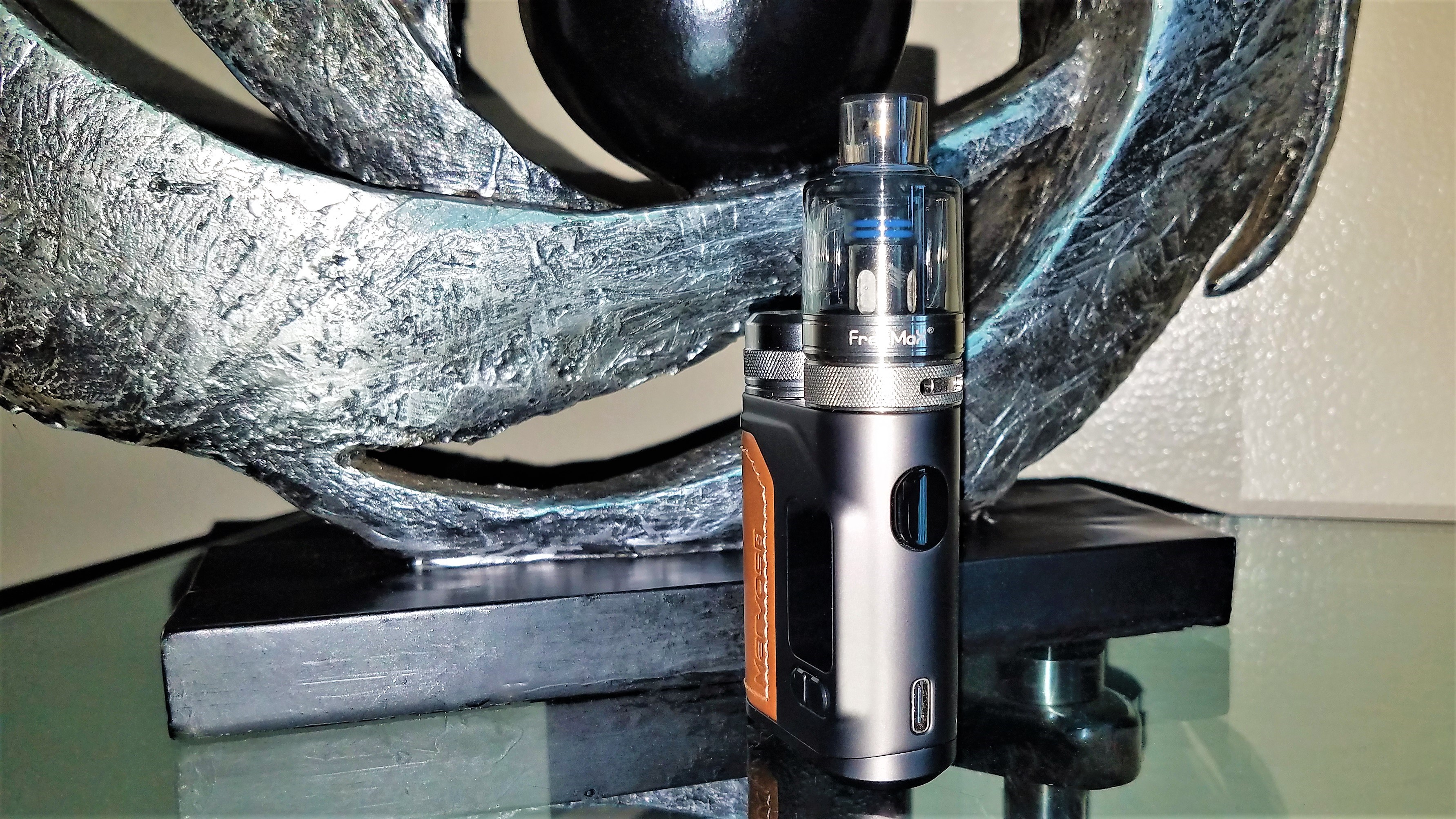 Turning the device around to it’s backside shows the full wrap of leather with nothing stamped or embossed on it, I know little branding leaves a clean look but I this side looks a little empty, I wish Marvos S was embossed on this side as well. ( JUST MY THOUGHTS ). 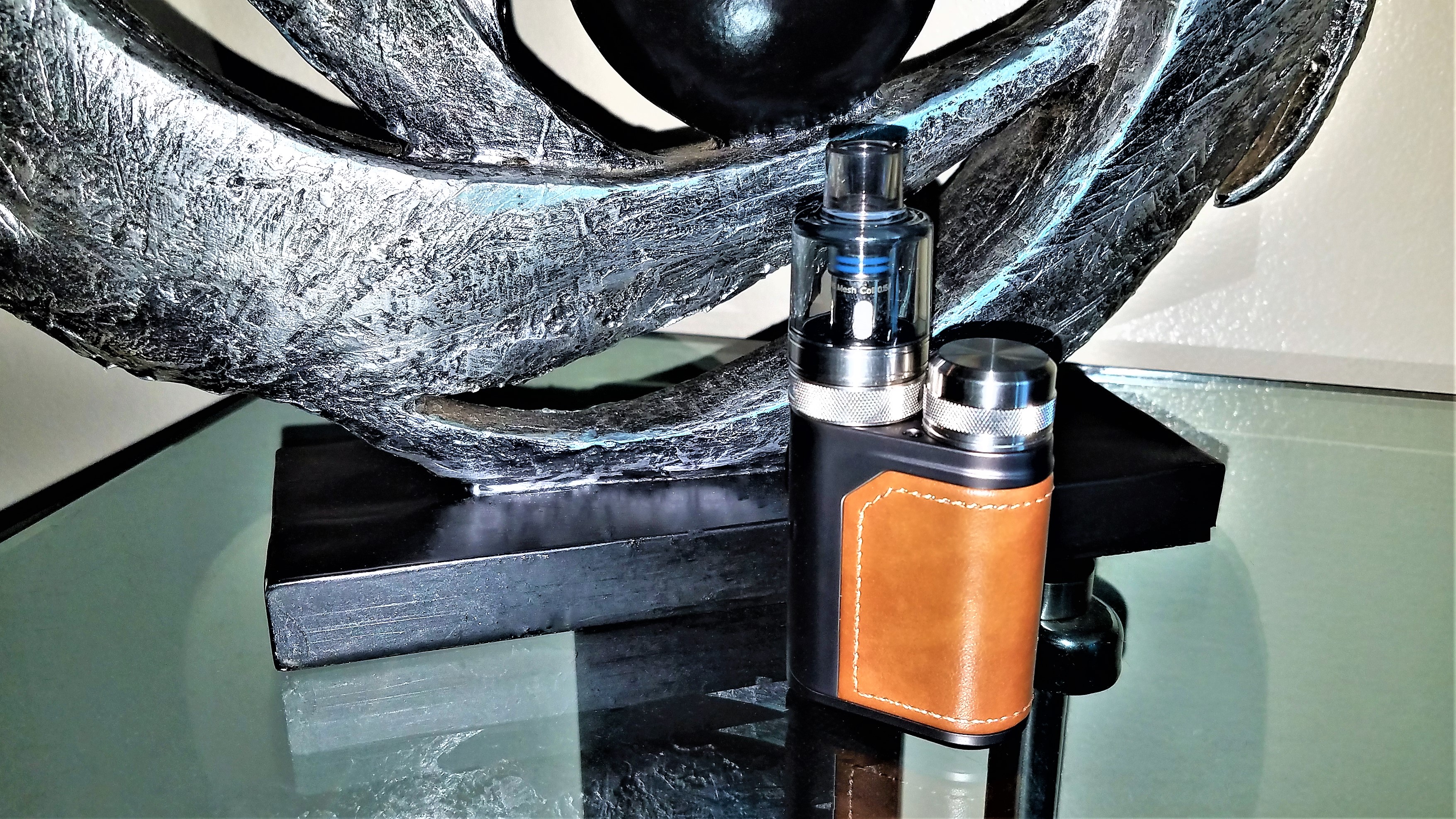 I was sent the GUNMETAL/YELLOW version and I think the leather color next to the matt gunmetal body color work well together I’m very glad the gunmetal was done in a matt finish avoiding fingerprints that would have tarnished the appearance. As I mentioned earlier having the knurling of the 510 adapter and battery cap match shows freemax really took the time and got it right when designing this kit.

Even the front of the device leaves a minimalistic appearance that works by having a nice sized display screen with correct sized adjustment buttons under it. 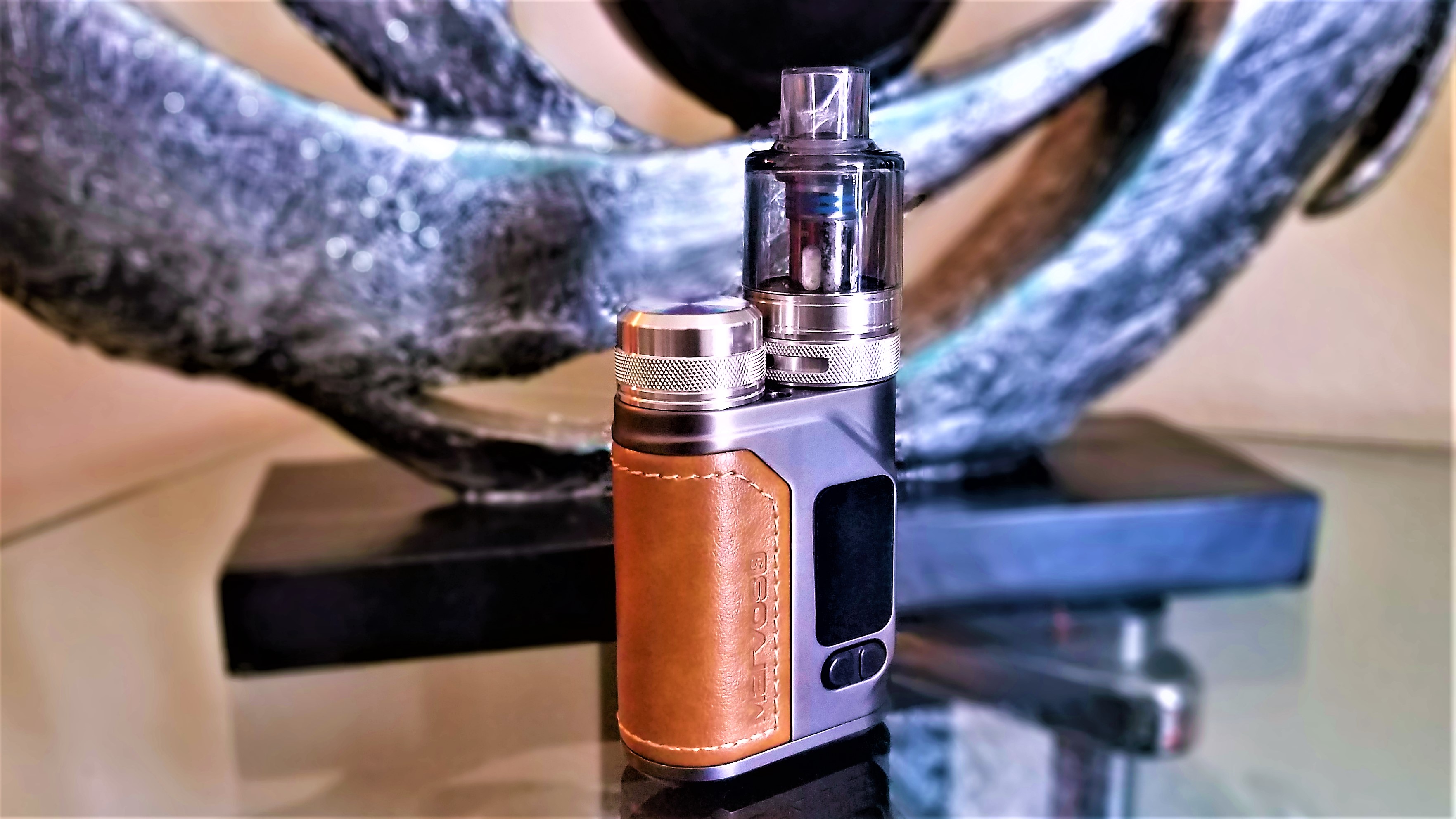 For those of you that have the other versions in the Marvos line all of the pod/tanks will work on the 510 adapter including the optional glass pod/tank as shown below. 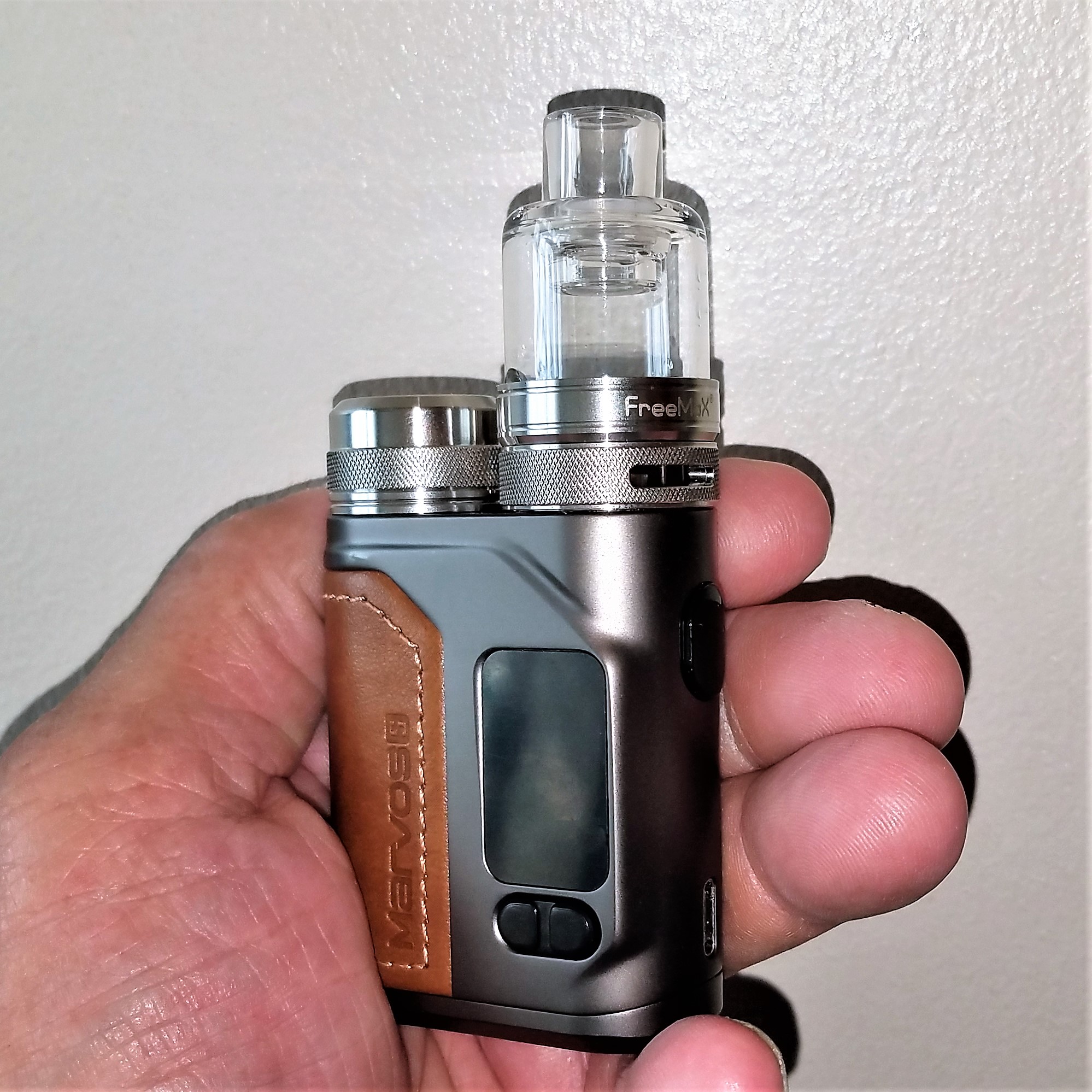 For those of you wishing to use your own 810 drip tip instead of the supplied stock one I threw on a black drip tip with a nice silver bezel at the bottom to show you how well another 810 drip tip would look. 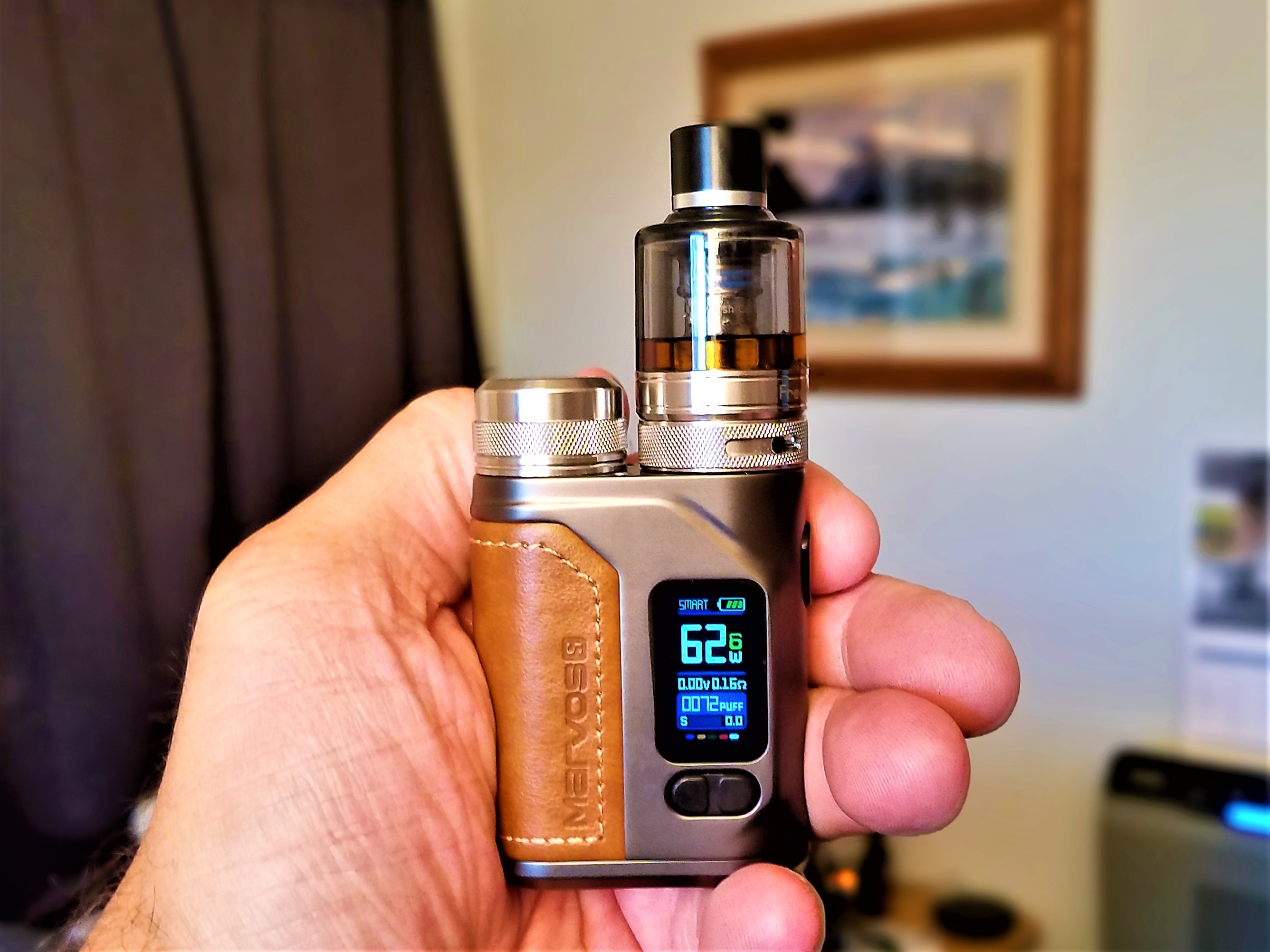 I saved the best for last, the 0.96 inch display screen as seen above is a very vivid one having fonts that are easily readable with your information laid out well on the screen.

There are 5 choices of a color screen and they are YELLOWISH BROWN, GREEN, RED, WHITE and BLUE.

There are 3 power modes on the Marvos S with 1 being a straight wattage mode called POWER that acts like any wattage device and can be adjusted using the adjustment buttons from 5-80 watts output.

The 2nd power mode is a BYPASS mode mode that basically works like a mechanical mod outputting power directly from the battery itself decreasing power output as the battery is depleted.

Freemax has a 3rd power mode called SMART mode that reads the coils resistance and sets the wattage at a minimum setting for the resistance of that coil and won’t let you go over the safe wattage of the coil it has read preventing the user from burning out the coil.

The SMART mode not only works with Freemax coils but also works on your own builds or other coils from different vape company’s. This feature is so good for a new vaper preventing him/she from burning out a coil prematurely, not only new vapers but veteran vapers benefit from smart mode as well.

* On/Off – 5 Presses Of The Fire/Power Button

* Color Change – Press And Hold Fire/Power and Minus Buttons Simultaneously

* 5 Color Choices On The Display Screen

* Threads Are A Bit Crunchy On The Battery Cap

Having only 1 real con with this kit and that being the threads on the battery cap are a bit crunchy on the last few turns when screwing it on, the other being bottom fill that is a inconvenience more than a con.

This device really cradles the hand for a almost effortless vape, I don’t even use the button anymore but rather use the large fire button like a fire bar and just squeeze to vape.

Freemax did their homework developing this kit giving us a 510 connection for use with other atomizers if one so chooses. I really like that the smart mode also works when using your own builds and other vape manufacturers coils pretty reasonably.

The attractive appearance of the leather being smooth and soft with a little bit of cushion to it blending with the matt gunmetal finish was a great mix of color and texture, heck even the 510 adapter and battery cap knurling match up perfectly.

Having a 0.96 inch screen to easily view your information on is great but having a choice of 5 colors to use on that display screen adds another bonus.

Having reviewed every device in the Marvos line and using the same pod/tank with every device I’m pretty familiar with it and I really like it’s performance, airflow is super smooth and I have zero problems using the stock drip tip because of it’s size as well as comfort using it.

This is Freemax so were used to fantastic flavor from them, the MS line of coils produce Freemax flavor as I call it which is great. I used 2 different juices that I know very well in testing of this kit and flavor came through as I knew it would, surprising to me was I got more intense flavor vaping the pod/tank with the airflow wide open.

In closing I will tell you I will continue using the Marvos S in my personal rotation of devices because it works so well and is a real looker as well.

I would like to thank Tina and Freemax for providing the Marvos S for the purpose of this review and will tell you folks that I 100% recommend the Marvos S very highly.

Do you have multiple vape rigs, many juices and coils for them, and need a way to keep track of what's in what? | Vaping Underground Forums