Hello again. Today I will be presenting my second review for DOVPO on the new BLOTTO single coil RTA. I have to admit that I have not tried any of the prior versions of the Blotto so cannot really do a comparison. There isn’t a reason why I haven’t tried them. It’s just that there are so many tanks on the market that I just can’t try them all. The single coil Blotto is a cooperation between Vaping Bogan and Dovpo and provides 272 degree airflow.

· 3. Comes with honeycomb holes inside the posts

I thought the packaging for the Blotto was rather nice. It may sound silly but I really like how there is a half circle cut out on the sides of the outer box cover that makes it easy to open the box. The front of the box is clear so you can see the tank. On the back is a list of the features of the Blotto RTA. After opening the top, the Blotto is sitting inside a foam insert with the straight 2.8ml glass tube pre-installed. I thought it had a very nice physical appearance. I lifted the tank and foam to find the rest of the accessories which included a Glass 5ml bubble tube, a PCTG 5ml bubble tube, user manual, accessory pack with o rings and tri tool, and a skull shaped bottle opener. The bottle opener actually serves two purposes. One of course is to open bottles but the other is to measure your coils for cutting the leads before installing a coil in the deck. There is a rectangular opening in the top of the skull opener that you can sit your coil inside of with one lead on either side of the metal and trim the coil legs. It comes out to about 5mm in length. 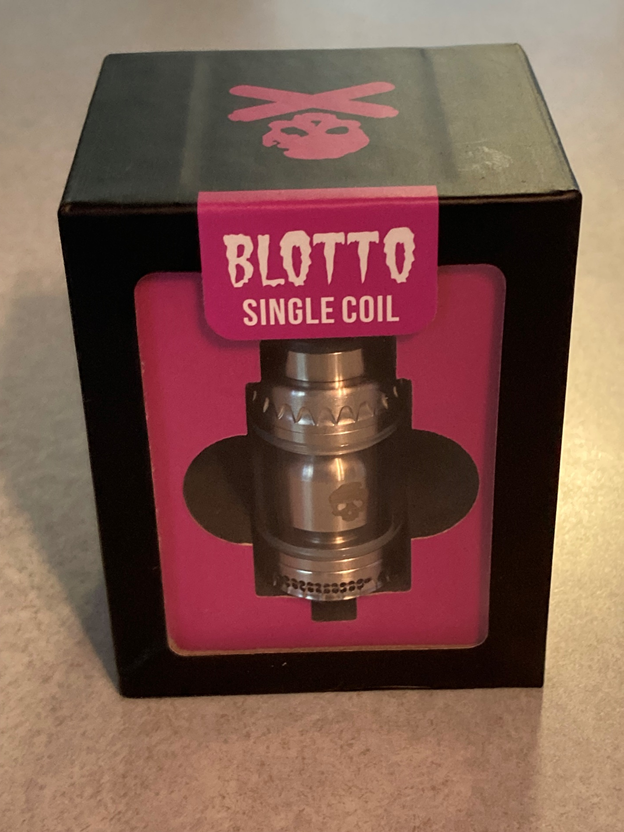 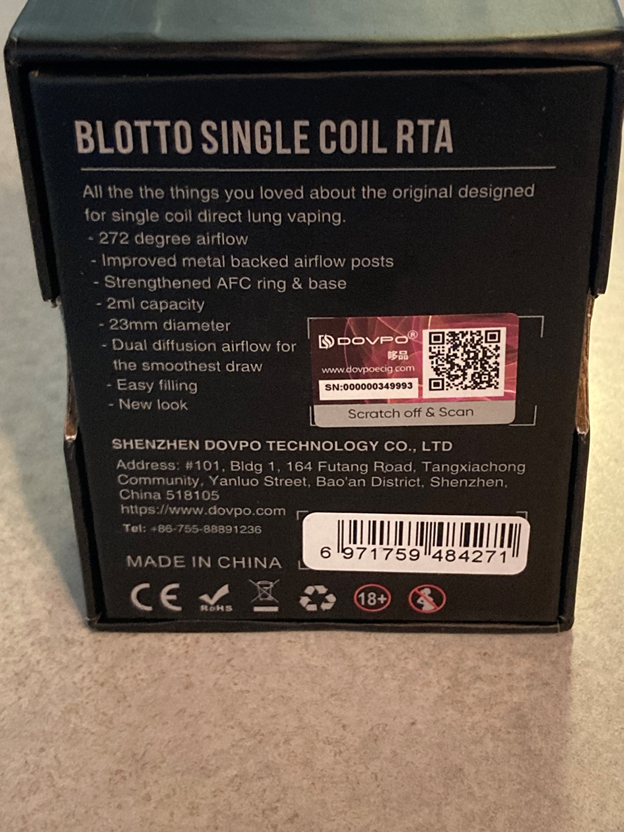 I have to admit that I have never tried any of the previous versions of the Blotto. From what I have discovered there were at least a dual coil version and a mini version. If there are more then I’m not aware of it.

The drip tip that comes with the Blotto is nice enough but way too short for me. The first thing I did was find a longer tip to use on it. The 810 drip tip does not have o rings on it. The o ring that secures the tip in the top cap is inside the cap. To me the top cap has the appearance of a bottle cap which is ironic since Vaping Bogan always includes a beer in his reviews. 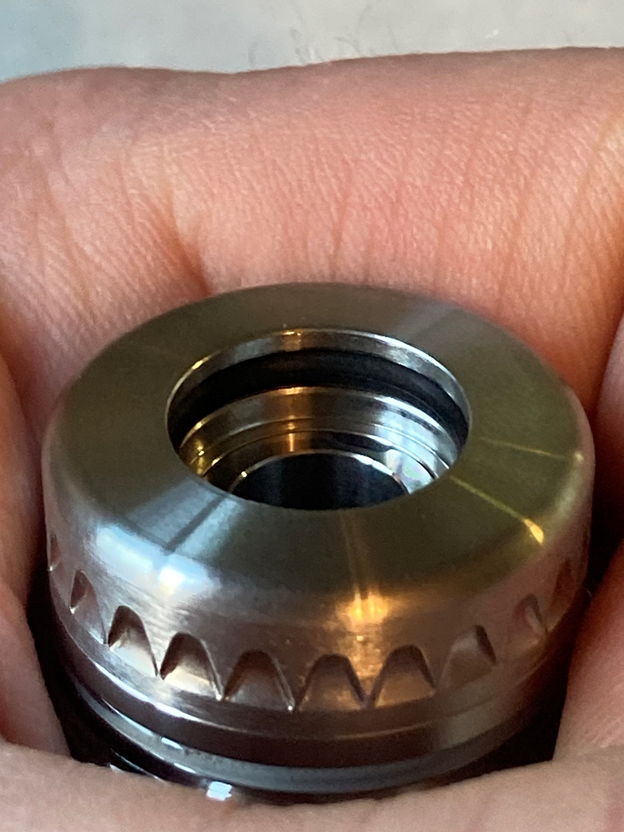 The top cap is a ¼ turn cam lock type of connection which has become common on many tanks and I really prefer this type of top cap connection. The fill ports are plenty large for most bottle types and had no issues filling the tank. You can see in the second picture that the o ring is a little deformed. This was a small issue that Dovpo is correcting before these go to production. I was able to push the o ring back in place and continue to use the tank like normal. 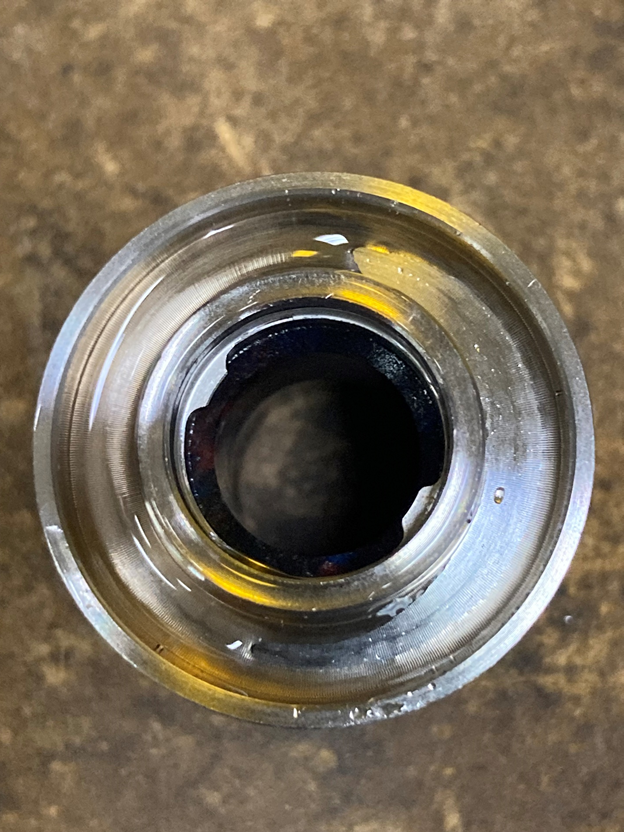 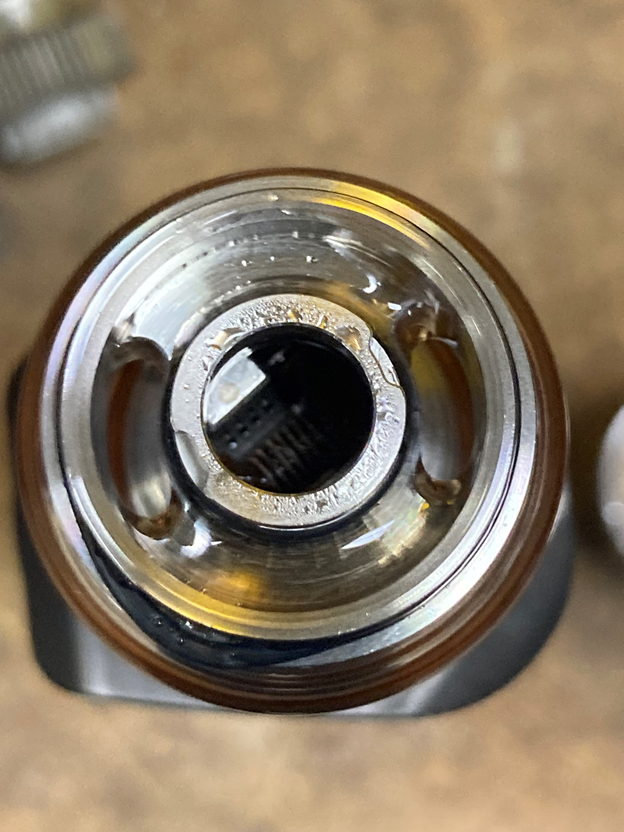 Like I mentioned earlier, the tank comes with the straight glass installed on the tank. I found it very easy to disassemble and clean the tank before use. I immediately installed the bubble glass because I wanted the extra liquid capacity it offers. There is an o ring on the top and the bottom and both stayed in place when I took it apart and cleaned it. It seems like a lot of tanks have one or both o rings stuck to the glass when they are first received. The outer bell of the inner tank has a skull symbol on it which is no surprised with who developed it. 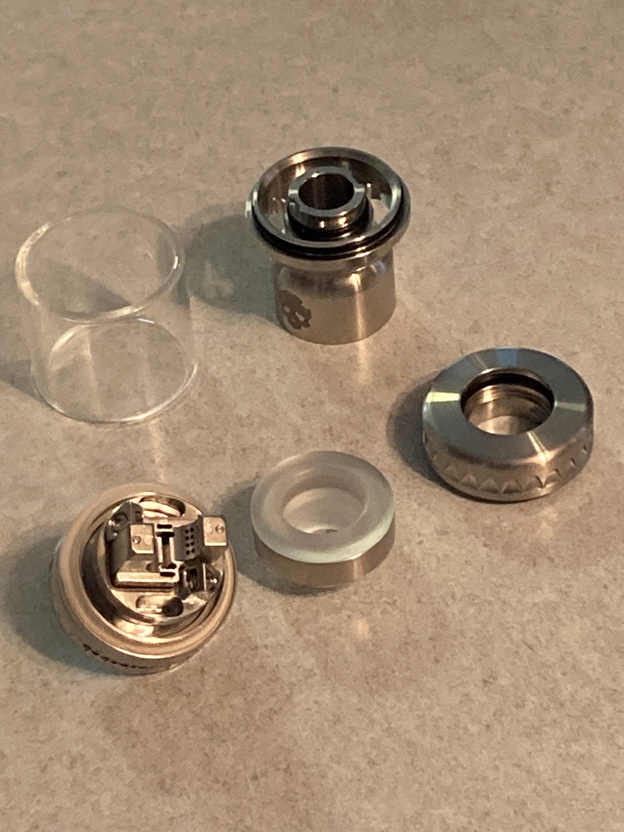 The deck on the Blotto is the most interesting part of the tank to me. I haven’t used an rta quite like this before. It has elevated metal backed airflow posts. On the coil side there are honeycomb airflow holes on both posts to diffuse the airflow to deliver evenly distributed air over the coil. There is also airflow from below that combines with the honeycomb to deliver the 272 degree airflow coverage on the coil.

The outer airflow control ring on the base also has honeycomb airflow holes and from what I understand the stops on the airflow ring have been improved over past versions since there were some complaints on the ring moving past the stops.

The posts on the deck sit at an angle opposite each other diagonally and have smallish flat head screws. I kind of wish they would have used an Allen wrench type screw instead. My eyes aren’t the best and had to have a little extra light when installing a coil. 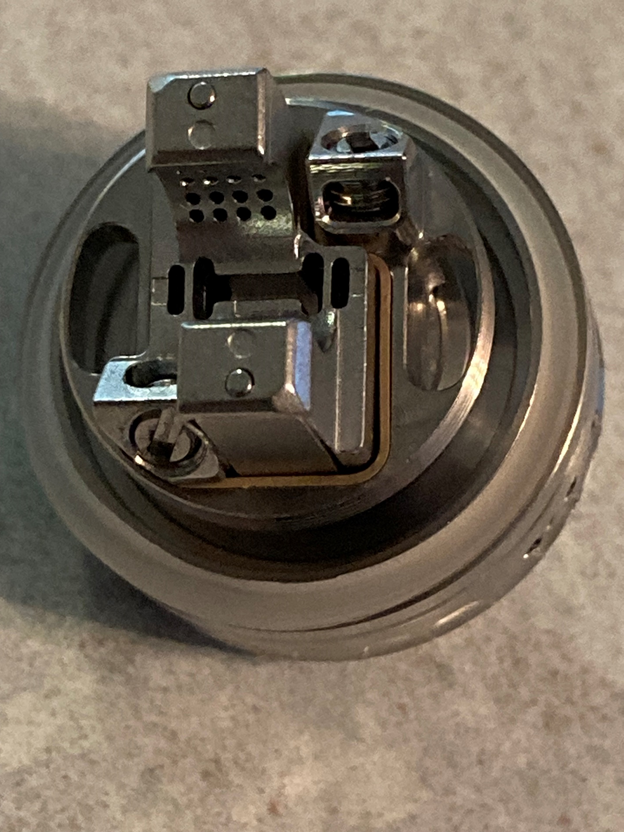 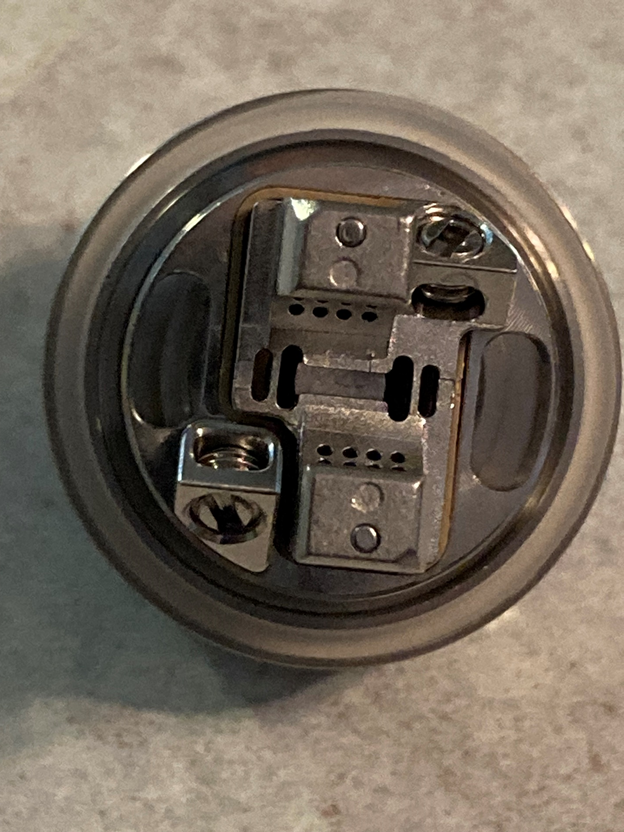 I tried a couple of different builds on the Blotto. My first attempt was with a 316SS flat braided coil but it was too flimsy and I was not able to install the coil without it deforming. Then I wound a 316SS 26/32 3mm Clapton coil and this wen much better. I liked this coil at about 28 watts on my Odin Mini DNA75C and it ran nicely with the airflow about ¾ open in Replay mode. I ran that set up for a few days then decided to try a 2.5mm Vandy Vape pre wound coil that was also 316SS. The 2.5mm coil was easier to install. The 3mm coil came in at around .4 ohms while the pre wound 2.5 was right at 1 ohm. The 2.5mm coil ran well with the airflow set about ½ open. I started at 15 watts and after break in ended up at 17 watts. The first picture below is the 3mm and the second is the 2.5mm with each installed and wicked.

It had been a while since I had tested a new rta. After twelve years vaping, I had settled in on my favorites for the most part. I have to say that I very much like the Dovpo Blotto RTA. You can just tell when something is well made. I can tell that a lot of thought went into the design and manufacture of this tank. The threads on the tank are very smooth and the top cap is easily removed or installed. I did have a little hiccup with the top cap external o ring but that will be corrected before production.

To me the Blotto Single Coil RTA not only looks and feels nice but also functions well which is what we’re all after in the end. The flavor production with both builds that I tried was very good and produced generous amounts of vapor. At first placing the coil was a little awkward for me since there isn’t a ton of room between the two airflow posts. I would say that a 3mm coil is about as big as I would recommend. I’m fine with that since I mostly run 3mm and 2.5mm coils.

I have tried a few RDA’s before that had similar honeycomb airflow like the Blotto and consistently liked the flavor production from them. I also like that the outer airflow ring is honeycomb as well as the two airflow posts on the deck. That along with the bottom airflow slots makes for a very good flavor producing tank.

When I installed the 3mm coil, I did thin the tails out on the wick before placing them in the cotton well slots. However, with the 2.5mm coil, I just cut the wick to length, loosened the fibers a little, and stuffed them in the wells. I never once got a dry hit and no flooding whatsoever. 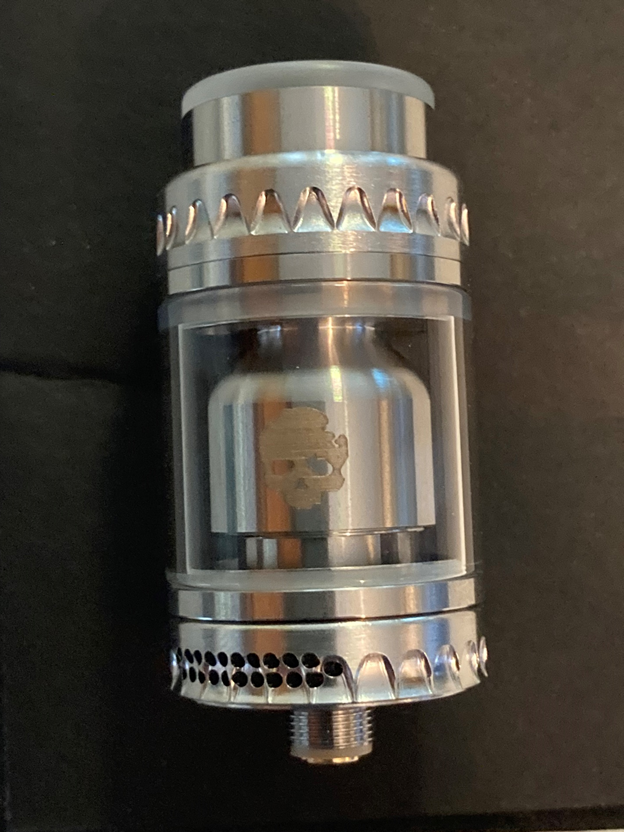