Home » Cigar » CSWC publishes the Top 20 of all time
Cigar

CSWC publishes the Top 20 of all time

“The world rankings with the top 20 results of all time is always a highlight of the CSWC season and celebrates the great achievements of many wonderful people”, says CSWC founder Marko Bilić. 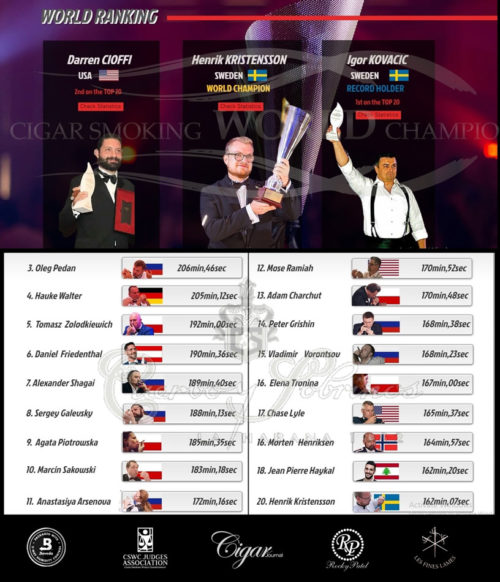 In these 11 years, more than ten thousand people from 52 countries took part in the CSWC concept. The world rankings 2021 was compiled from eleven years of CSWC history with the inclusion of all participants from all nations. In more than a decade of CSWC, amazing, even spectacular, competitions have taken place. There were great moments, tense scenes, many broken records and some unimaginable smoking times with the respective competition cigar, a Mareva format.

The United States maintains its solid position across countries, with one of CSWC’s greatest icons, Darren Cioffi, remaining in second place in the top 20. The USA occupies three of the top 20 places. In terms of the number of top 20 results, however, Russia leads with six places, led by Oleg Pedan (3rd). Poland has made up a few places and occupies now five places in the top 20 list behind Russia. Tom Zol as the best Polish smoker is in fifth place. Sweden occupies three places on the list. Germany, Austria, Norway and Lebanon have a place each.