Hello again and welcome back for today’s review of the Brunhilde SBS 100 watt device from Vapefly that was provided to me from Sourcemore and can be purchased there using this link Vapefly Brunhilde SBS 100W Box Mod VW/TC and if you use this code SBSM the price drops to $48.31 and as of today’s date it will ship in 24 hours with free shipping. I was supposed to receive the full kit with the Kriemhild II Sub-Ohm tank but just the mod arrived, don’t worry I have a worthy atomizer to place on the SBS for testing. In Icelandic mythology Brunhilde was a Valkyrie female warrior maiden of the god Odin that was punished by him for not supporting a king that he favored, for this act of betrayal Odin placed her into a deep everlasting sleep surrounded by a wall of fire as mythology says. 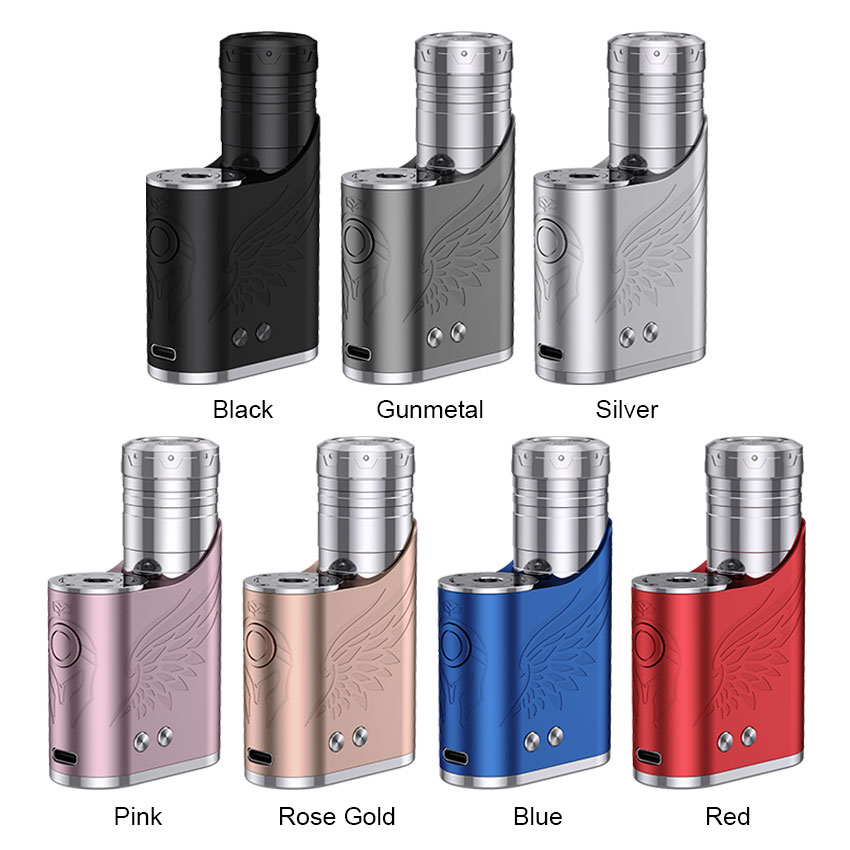 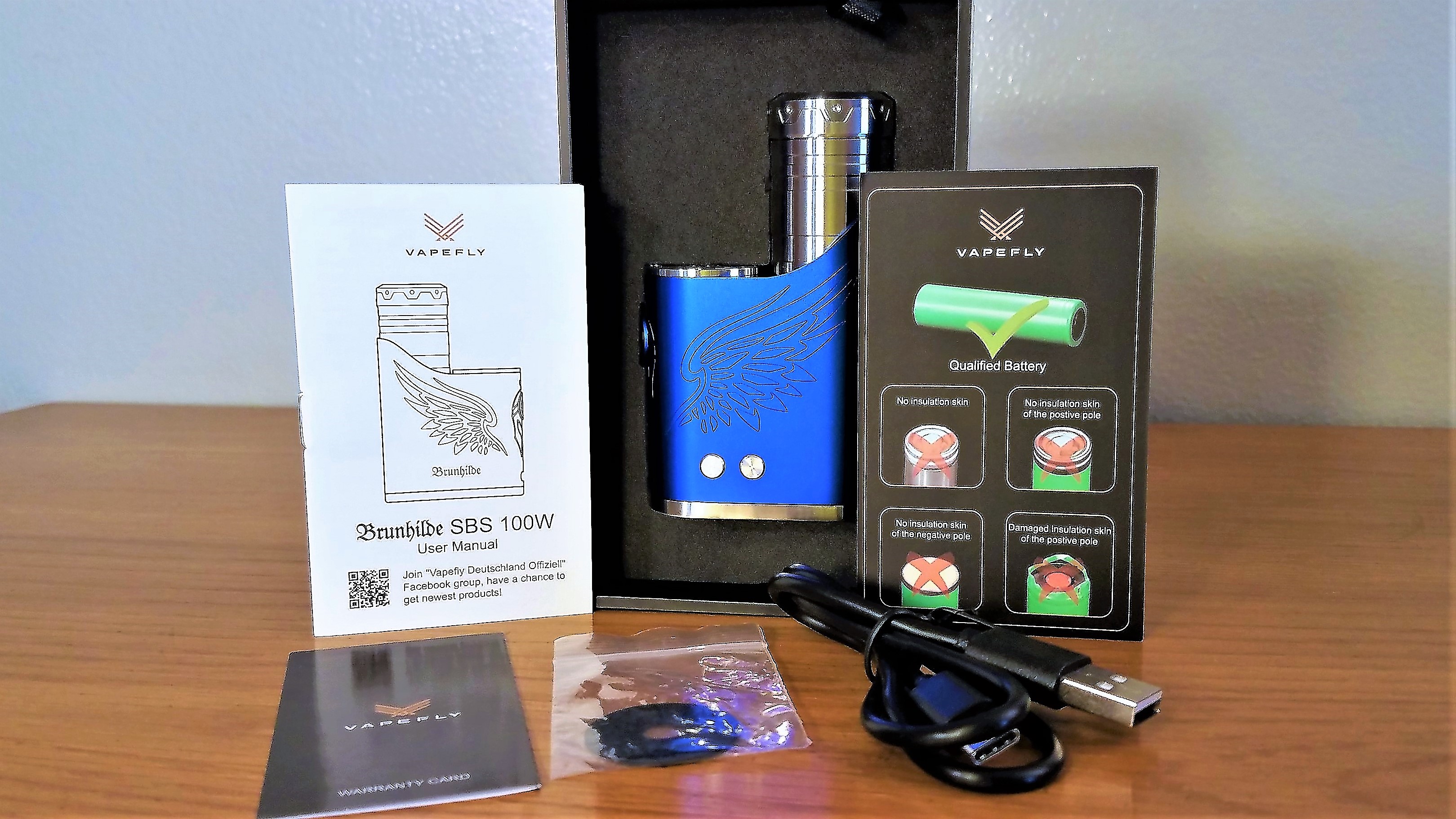 Opening the box the Brunhilde in all it’s glory lays in a cutout by itself with the 2 mod protectors, charge cord and paper material consisting of the user manual, battery warning card and warranty card are inside a box underneath the Brunhilde SBS device.

A plastic wrap is on the body to prevent scratches to the paint leaving it pristine on arrival, removing the sticker it’s beauty can be admired further. Under the wing on one side is the Brunhilde name that is also laser engraved as the wings are.

Engraved wings are featured on each side of the device that stop at the spine of the mod. The device itself represent the helmet of the warrior Brunhilde that had wings on each side of it as the mythology says. 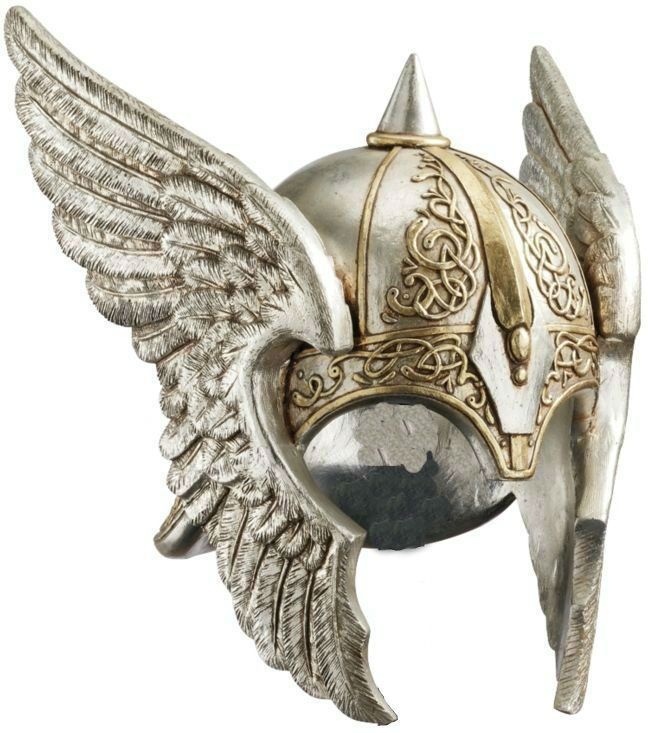 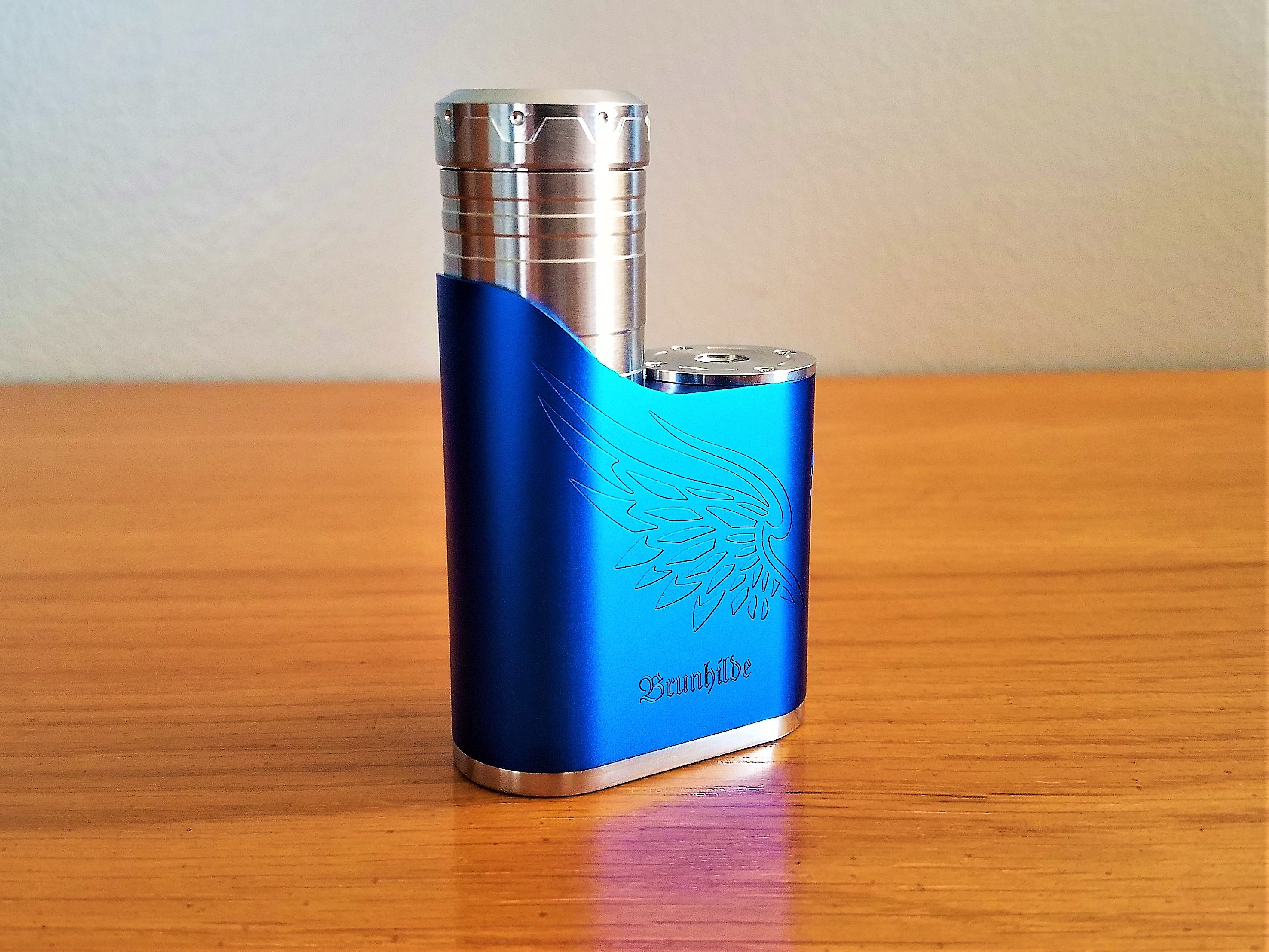 The front of the SBS device is where the fire buttons location is with further representation of the warrior Brunhilde’s helmet complete with side panels to protect her face. The type-c charge port was placed at the bottom portion of the devices face. There are no sharp edges anywhere on the device making it comfortable holding in any hand position, notice the fire buttons color matches the color of the device for a almost invisible blending effect. 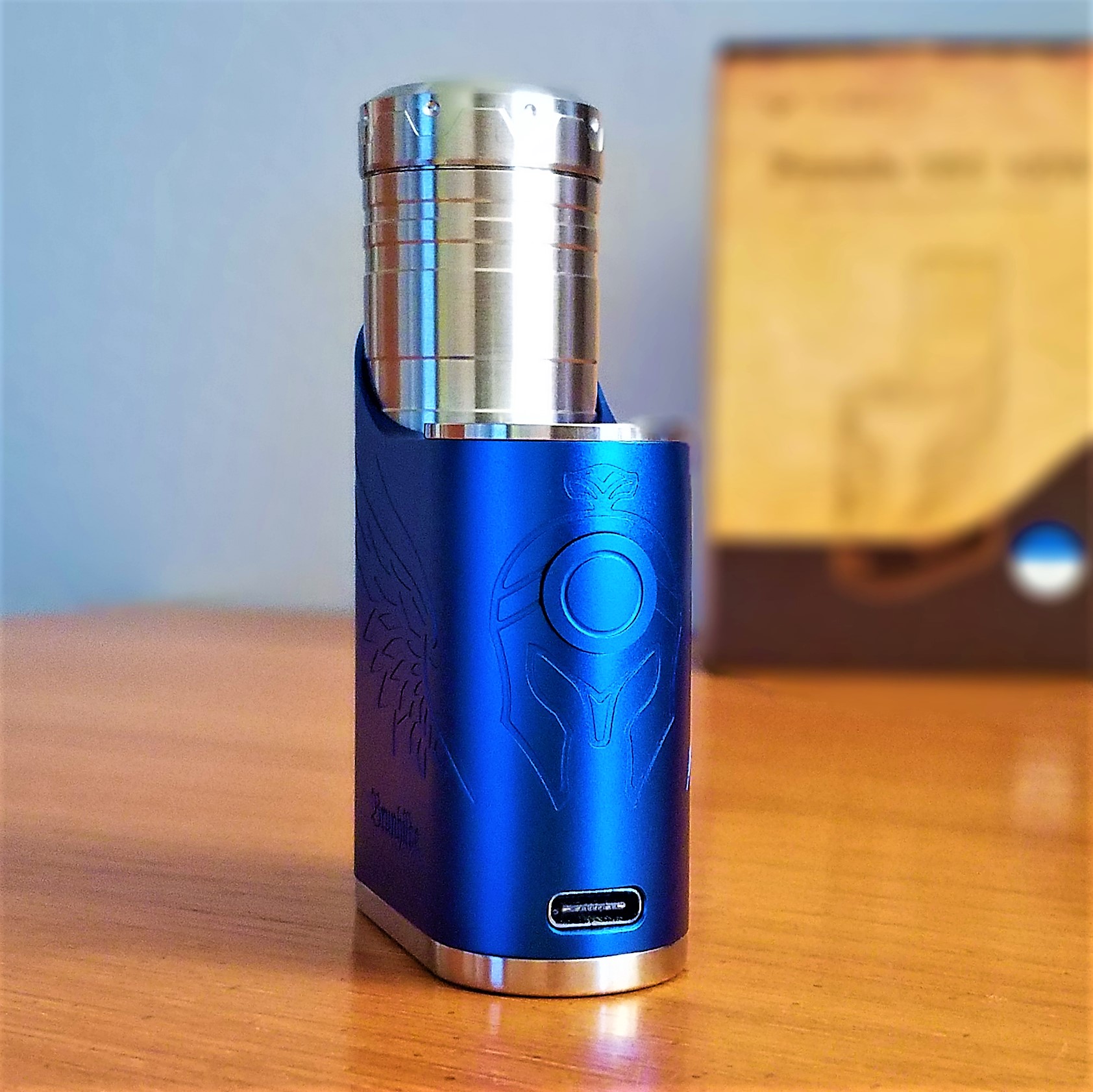 Further story telling continues on the battery cap showing the wall of fire that surrounded the Valkyrie warrior Brunhilde while she lay in her everlasting sleep engraved as well, there are 3 slots cut into the cap for battery ventilation. Vapefly and the German group really carried the mythology all the way in the design of the SBS. 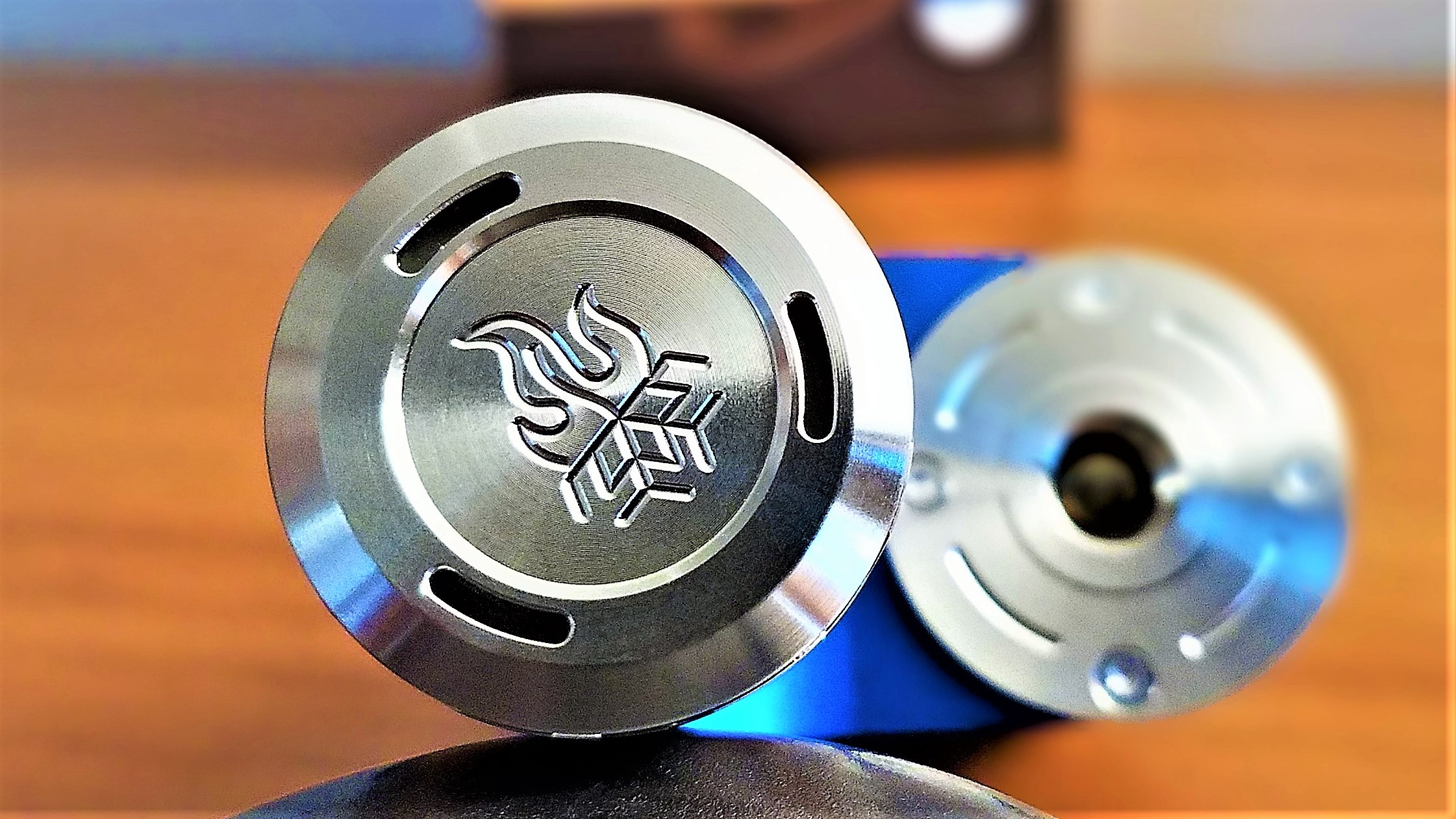 Correct battery polarity is marked with a red plus symbol inside the battery tube and the battery cap has a minus symbol stamped inside it between 2 battery ventilation slots. Any 26mm atomizer used on the Brunhilde SBS will sit flush with no gap between it and the 510 top plate, the 4 cuts in the top plate of the 510 serve no purpose other than being aesthetically pleasing to the eye. Remember that most bubble tanks won’t fit.

The laser engraving of the helmets face and wings are really done well, both wing tips meet at the same spot where the spine of the device begins. Having the battery tube, cap and adjustment buttons all done in silver highlight the device very nicely. I of course wanted to take advantage of the 21700 battery capacity but 20700 and 18650 batteries can also be used in the device. I tried all of the above mentioned batteries and all performed fine, fit was solid as well with no movement heard or felt when the device was shaken. 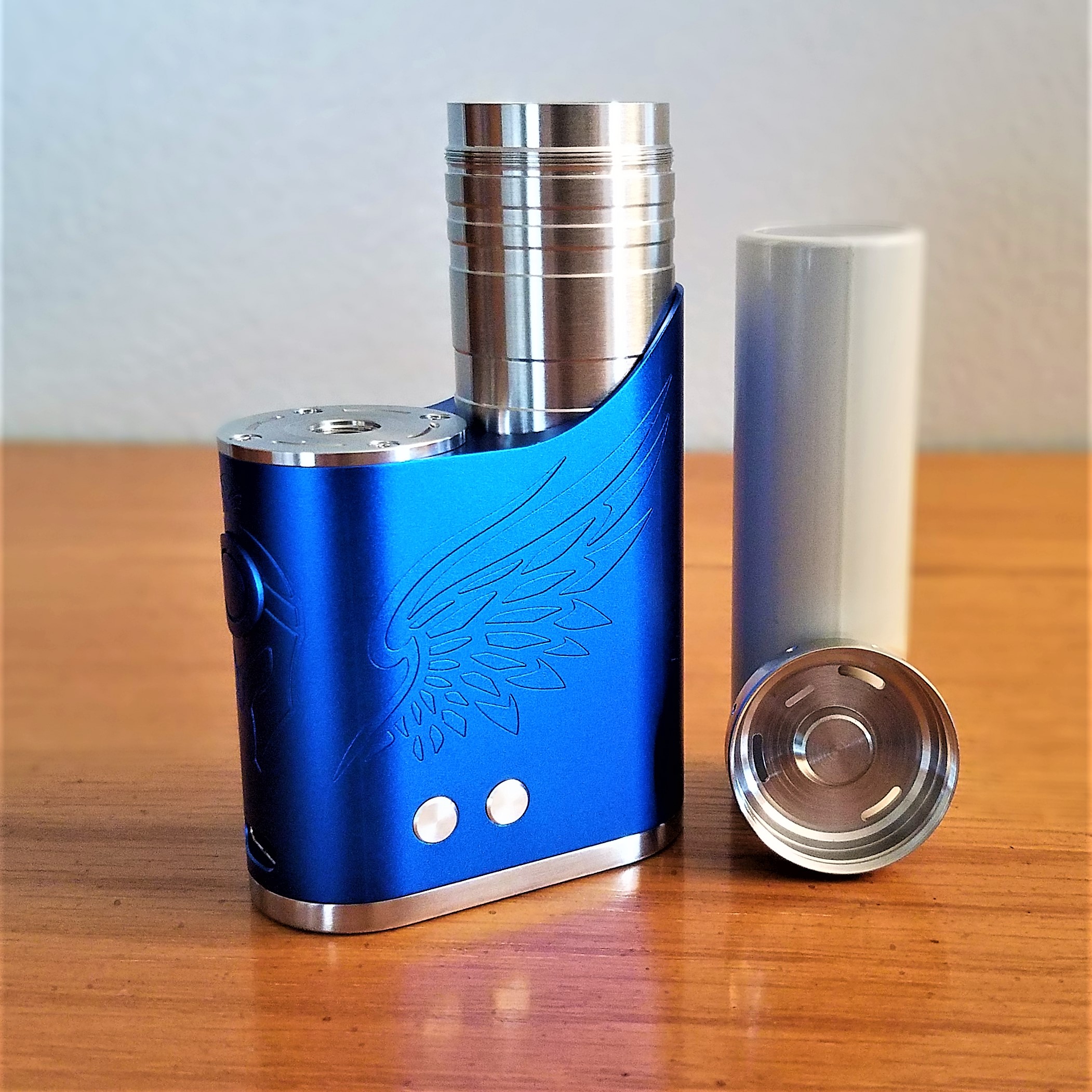 On the bottom of the device and recessed inward is where the display screen is positioned, this is a plain white screen that is very bright and vivid with the font size being just the right size for quick viewing without needing to squint. Six ventilation holes are also on the base plate.

This is a very basic layout of information because of space but it gives you all you really need to know in a 4 position setting on the display screen.

DISPLAY SCREEN LAYOUT ( TOP TO BOTTOM AND LEFT TO RIGHT ) 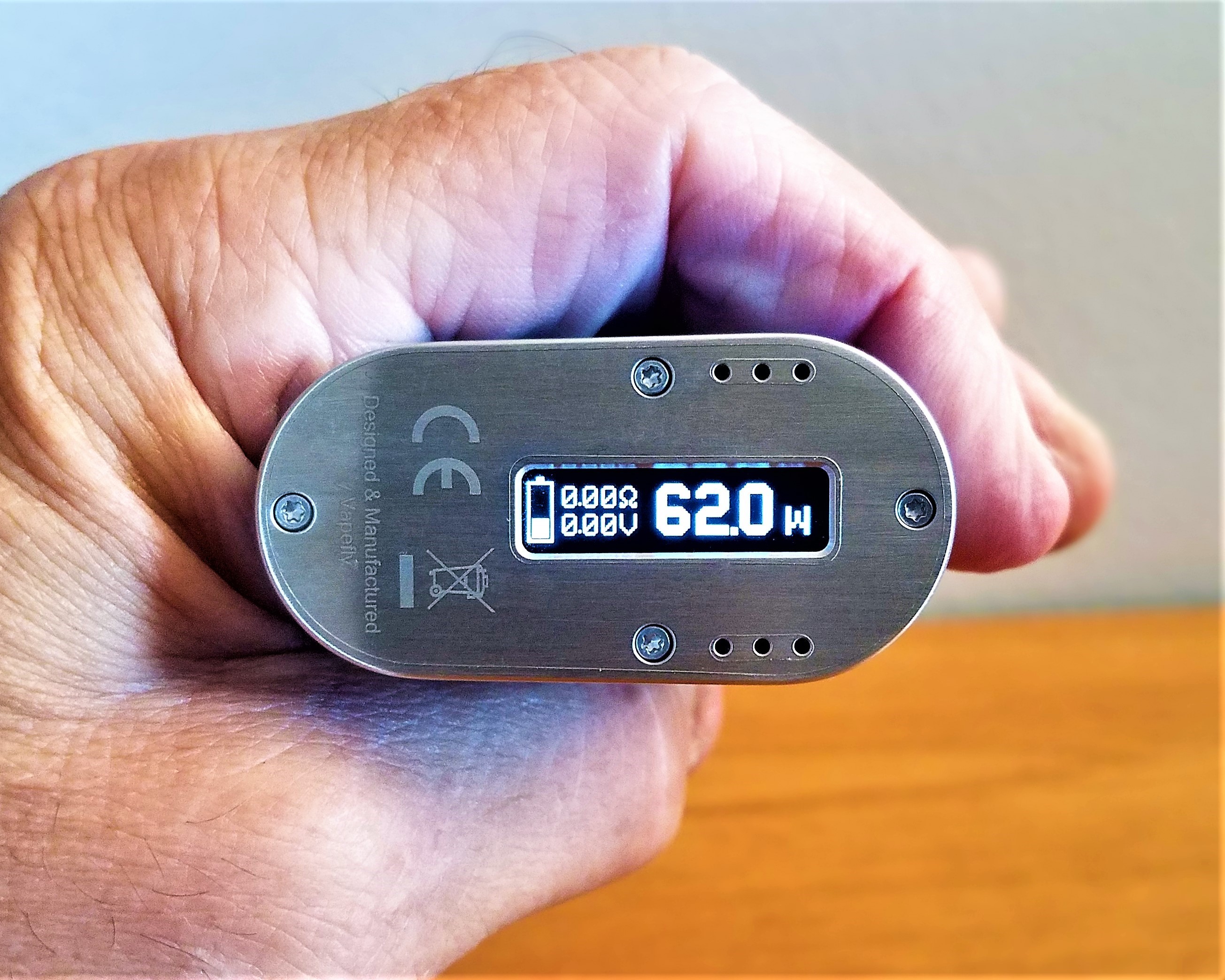 As I mentioned in the beginning of this review I was supposed to receive the full kit for review but some mishap happened and I only received the SBS device which left me to search through my inventory of atomizers to mount on the SBS.

I happen to be a person that likes their atomizer to match the mod it’s placed on and during my search I came across a old atomizer that at the time was going to solve problems with the version it was replacing.

In the looks department this atomizer was gorgeous for it’s time and came in a blue color that happens to be my favorite color so I ordered it, tried it, and it was a failure in the flavor department so it sat until I came across it looking for a atomizer that would match the SBS.

I didn’t use it in testing the device because I knew what the performance was going to be like but I just wanted to include it in the photos to show all of you how nice looking it would have been because the color match was close to a perfect match, protective sticker is still on the Brunhilde SBS in this photo. Rest assured I did find a atomizer worthy to sit on the Brunhilde SBS 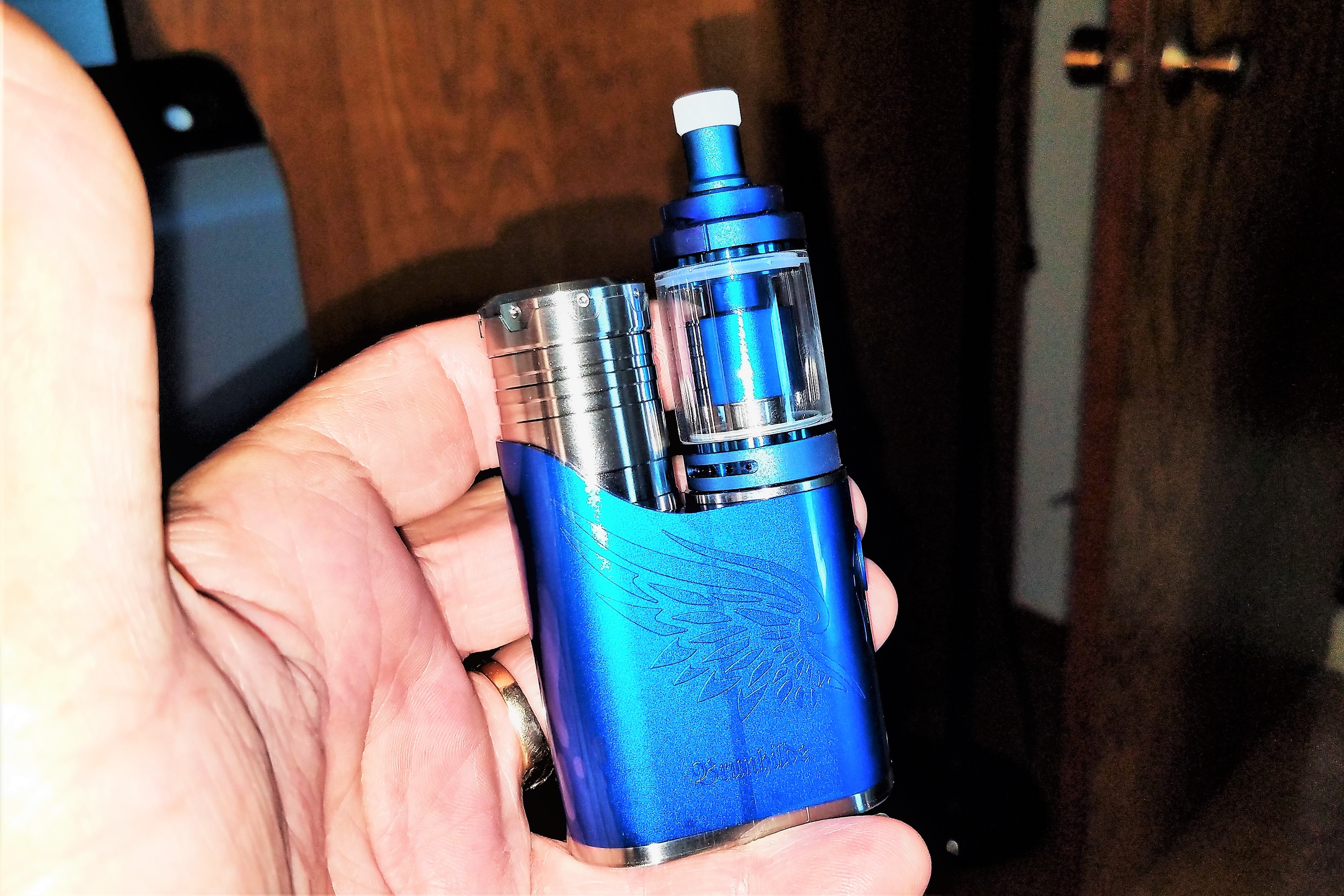 I don’t know why that atomizer was still in one of my vape bins because I thought it was tossed years ago. I did find a atomizer that fit the bill for the review of the Brunhilde SBS, it does have it’s shortcomings but vapes very well and looks good as it’s side kick atomizer. 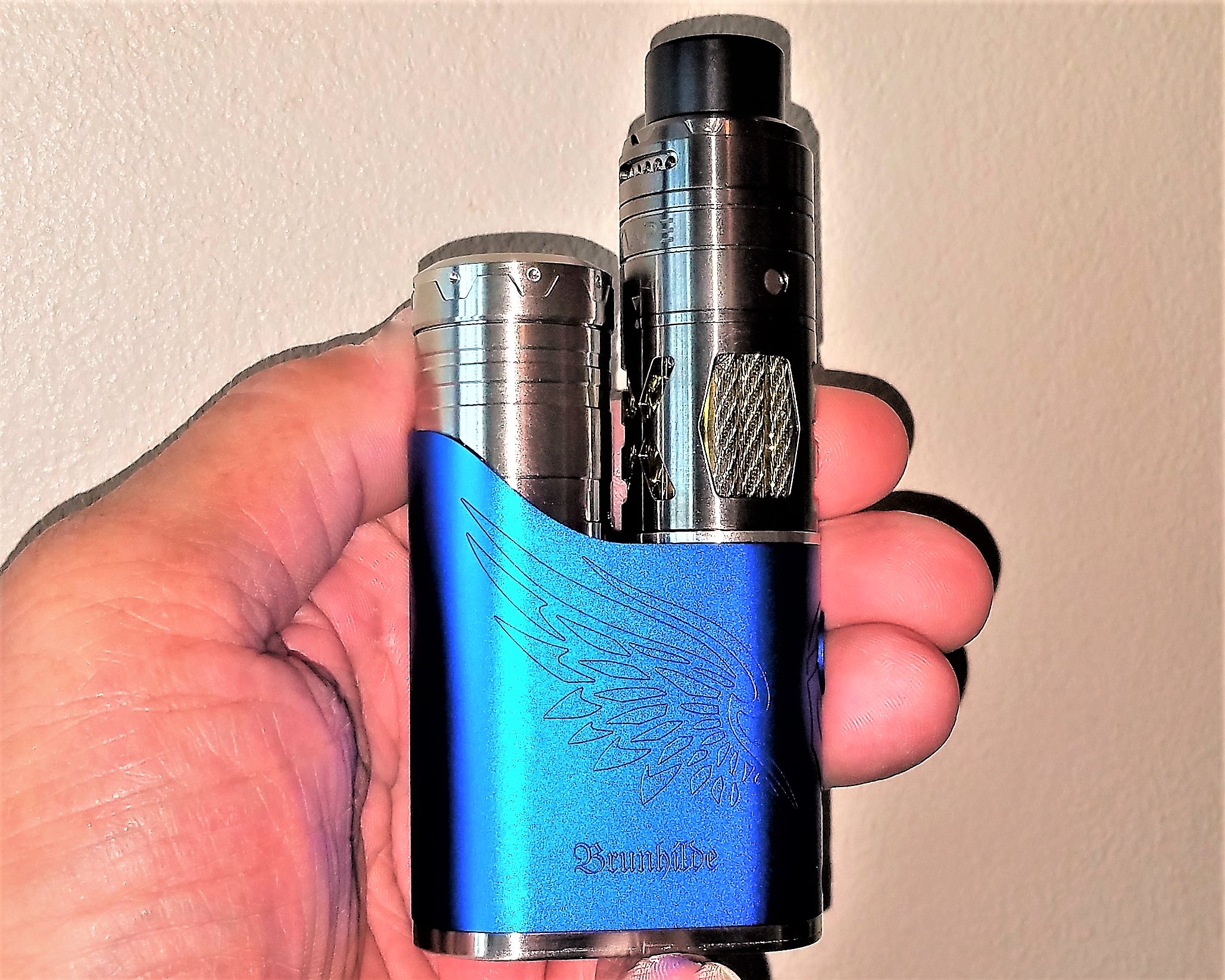 I don’t vape in temperature control so I can’t be of help to those of you that do, but in wattage mode the Brunhilde shines and has become a favorite of mine.

Wattage is increased/decreased in 1 watt increments when either adjustment button is held down but you can change wattage adjustments by 0.1 increments by just tapping the adjustment buttons so those that like to vape in 1 tenth settings will be happy as well. The round robin feature is also present on the device.

The menu on the device is so easy to use and navigate.

* Screen flip – Press and hold the fire and up button simultaneously 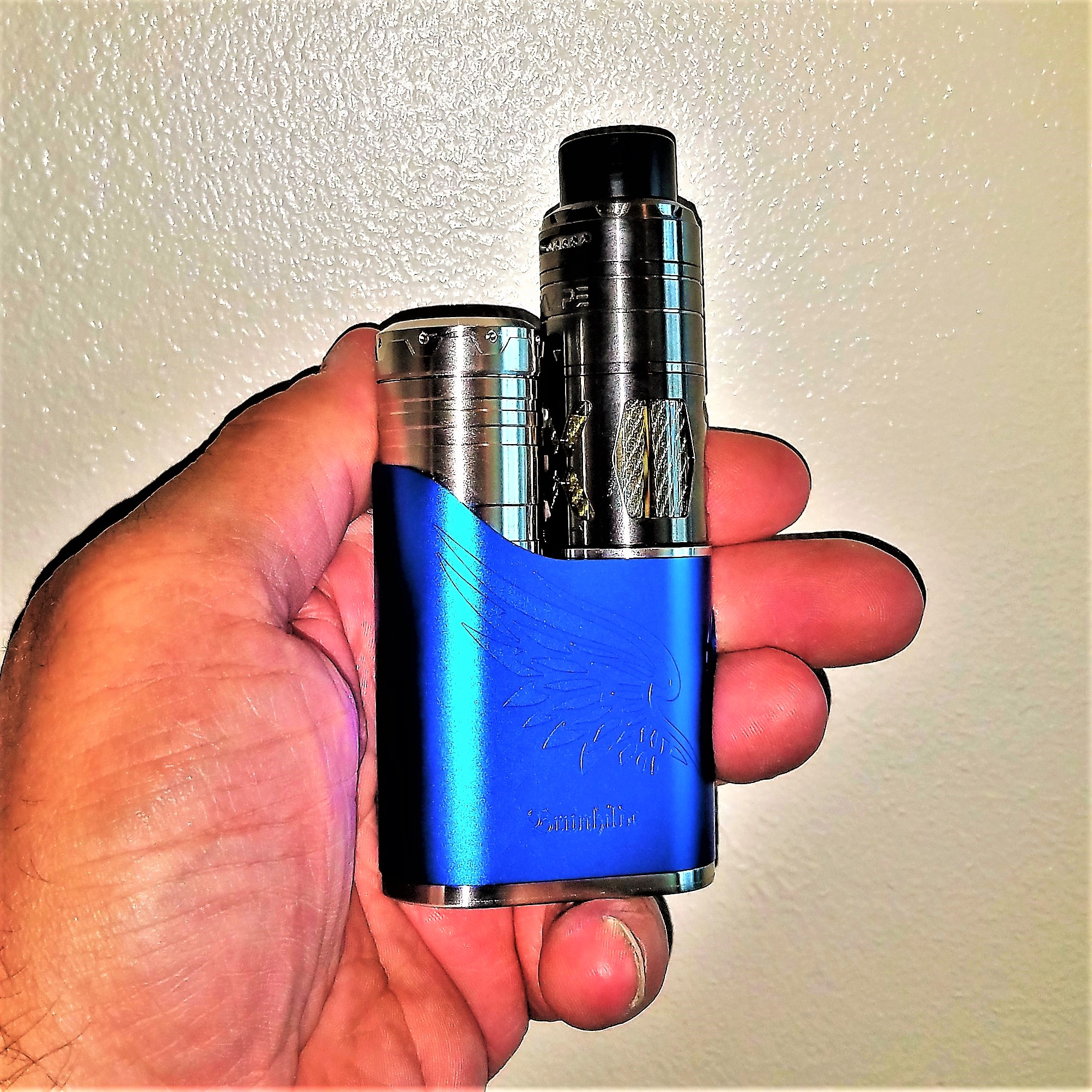 In the time I’ve been using the Brunhilde SBS which is considerable because of previous reviews backed up in my queue of vape devices it has become a favorite of mine, my large hands sometimes have trouble with smaller devices like a SBS but the Brunhilde just seems to fit my hand very well.

Buttons seem to line up well and lately I have been using it by squeezing and the fire button works like a firebar which makes the vape effortless.

I wish the full kit was sent because I know and have used the older Kriemhild tank quite a bit and would like to see the changes if any were done on the new version. I am going to get the MTL Brunhilde atomizer and use it on the SBS, I’ve heard nothing but good things about it.

Even though I only vape in wattage mode and only use the adjustment buttons for increases or decreases of wattage it’s nice to have a menu system that is easy to navigate with only a few button combinations to remember.

Power is clean with no spikes or drops and she hits immediately with no ramp up or need for a pre-heat, I very seldom vape past 70w so there is more than enough power for my needs.

Incorporating the mythology traits of the female warrior Brunhilde’s helmet on the mod is fantastic as well as being done perfectly, I mean even the battery cap has the flames that surround her on it.

In closing I will tell you that now I see what all the who ha about this device is all about having used it for a great deal of time. I think it’s a winner and 100% recommend it.

I would like to thank Joyi and Sourcemore for providing the Brunhilde SBS from Vapefly for the purpose of this review and I hope all your questions were answered.