Habanos Day 2016 in Germany offered up the opportunity for an unconventional tasting. Over a period of two years, 150 sticks of the Partagás Serie D No. 4 with a boxing date of 2013 were stored under varying conditions. The cigars were then individually weighed; those that were too heavy or too light were discarded. In January 2014, 50 cigars were respectively stored in fundamentally different environments. Four weeks before the tasting, all the cigars were brought to the same humidity level (70%) using a professional, electronically controlled humidor. Forty-five testers then assessed the numbered cigars in the following categories: bouquet, draw, visual appearance, aroma, strength, taste, and taste development during the course of the smoke. The final question was: “Which cigar would you smoke to the end?” 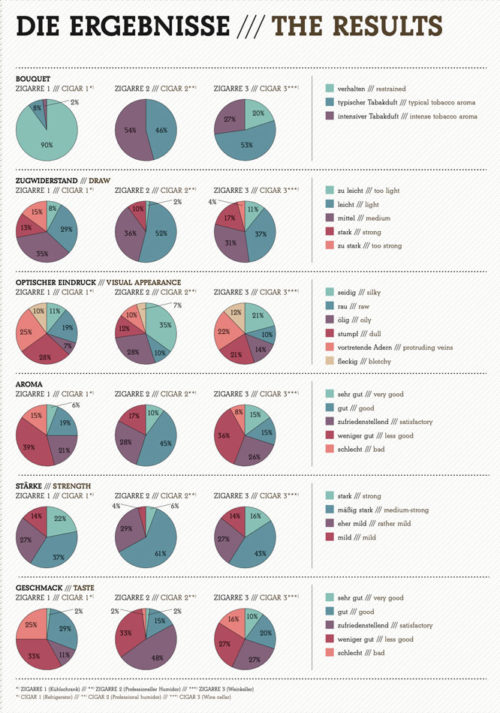 Results for bouquet (cold): A full 90% of the participants attested to the aroma of the refrigerated cigar being restrained or lacking in distinction. This is also not surprising, because at low temperatures a cigar dries out, and the essential oils are almost completely lost. With the cigars stored in the wine cellar, 80% of the testers assessed the cigar as having a “typical” or “intense tobacco aroma.” With the professionally stored cigars, 100% of the participants came to this same conclusion.

Results for draw: For 88% of the testers, the draw resistance of the cigar from the humidor was light to medium. Sixty-four percent of the testers considered the refrigerated cigar to be medium or light. For the wine-cellar cigar it was 68%.

Result for visual appearance: Only 18% of testers thought that the refrigerated cigar had the desired state of a silky-oily wrapper. The cigar from the humidor scored 63%, ahead of the winecellar cigar, which 35% of the testers rated this way. Strongly fluctuating humidity and low temperatures lead to quick depletion of the oils in the tobacco and are responsible for dull and seemingly dusty wrappers.

Result for aroma (during the smoke): The aroma of the refrigerated cigar was found to be less-good to bad by 54%. The wine-cellar cigar received a 30% approval for good to very-good aroma. But also in this category, the correctly stored cigar clearly won, with 55%.

Result for strength: Assessing the strength of a cigar is more difficult than it seems upon first assumption. However you broach the subject, it is not very easy. For this reason, the comparative smoke is so interesting because the tasting and evaluation are done not on an absolute basis but a relative one. The refrigerated cigar was evaluated as being medium-strong to strong by 59% of participants. Sixty-seven percent found the cigar from the humidor to be medium-strong to strong; 59% said that the cigar from the wine cellar was, likewise, medium-strong to strong. Clearly, storage at low temperatures does not have a very big influence on the strength.

Result for taste: For certain, evaluating taste is always going to be subjective, but with this type of tasting, in which the cigars are evaluated relatively to each other, the results are still quite reliable. The refrigerated cigar was found to be less-good to bad by 58% of the testers, 25% of whom assessing the cigar as being explicitly bad. This is quite strange. The cigar from the humidor was evaluated as less-good to bad by only 4%. This cigar was found to be good to very good by 63%; and still one-third of the participants found it to be satisfying. This is a more than clear result. That the wine-cellar cigar, with 43%, was evaluated as less-good to bad fundamentally mirrors our comparative smoking test from the year 2012 (see Cigar Journal, Winter 2012). Here, too, the cigar, subject to fluctuating humidity, scored quite badly.

Result for taste development during the smoke: In this evaluation multiple answers were allowed. The most interesting were the assessments that showed a clearly discernible taste development and, at the same time, a positive or negative appraisal. Here, too, the refrigerated cigar was not convincing. With 35%, the wine-cellar cigar came in second; the winner was the cigar from the humidor, with 66%. The last question required the participants to choose which cigar they would smoke to the end, or, which one they found to be the best. For me, the result was not surprising, per se, but in the very unequivocal result, it was surprising. Almost three-quarters of all test participants found the cigar stored in the humidor to be the best. In conclusion, it can be stated that the generally recommended storage conditions at room temperature (even when this fluctuates between summer and winter) and approximately 70% relative humidity by far deliver the best result. Storage in the refrigerator irreversibly ruins a cigar. Too low a temperature is not conducive to the post-maturation of the tobacco. For this reason, storage in a wine cellar can only be recommended when the temperature is not sustained at lower than 16°C (61°F), and the relative humidity is subject to the least possible fluctuations.

For any questions, please write to: Marc André at [email protected]