Habanos Day 2018 in Germany offered the opportunity for an unconventional tasting. Over a period of about two years, 150 sticks of Montecristo Petit No. 2 (boxing date April 2014) had been stored under varying conditions. The cigars were then individually weighed; those that were too heavy or too light were discarded. In January 2016, three sets of 50 cigars each were respectively stored in fundamentally different environments. Four weeks before the tasting, all the cigars were brought to the same humidity level (70%) using a professional, electronically controlled humidor. Fifty testers then assessed the cigars, which were assigned different colors (red, blue and green) in the categories bouquet, draw, visual appearance, aroma, strength, taste, and taste development during the course of the smoke. The final question was: “Which cigar would you smoke to the end?” and was the exciting highlight of the tasting. The participants did not know which color was assigned to which storage environment. 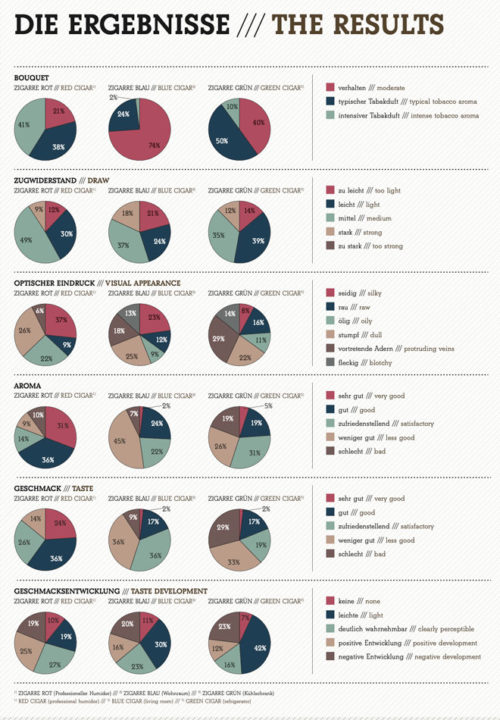 RESULTS FOR BOUQUET (COLD)
The result is not a great surprise. While almost 80% of all participants attested to the aroma of the humidor-stored cigar as having a “typical” to intense bouquet, with the living-room-stored cigar it was just 26 percent, and for the cigar stored in the refrigerator 60 percent. This is because at low temperatures the post-maturing process is almost entirely halted. In any case, fluctuating humidity causes the biggest loss in the bouquet.

RESULTS FOR DRAW (COLD)
Generally, the draw resistance for the Petit No. 2 ranges between light to medium; the evaluations are similar in all three groups. Were this test to be done after a few years’ more aging time, it would be expected that the assessments would be more extreme: the draw resistance for the refrigerated cigar the strongest (due to the contracting tobacco); the (non-humidified) cigar stored in the living room the lightest.

RESULT FOR VISUAL APPEARANCE (ASSESSMENT OF THE WRAPPER; MULTIPLE ANSWERS WERE ALLOWED)
With 19 percent, the refrigerated cigar definitively did not have the most desired state of a silky-oily wrapper. What was noticeable was the significant assessment of “raw/dull/protruding veins,” with 67 percent. Strongly fluctuating humidity (living room) and low temperatures (refrigerator) lead to a quicker depletion of oils in the tobacco and are responsible for this result.

RESULT FOR TASTE
For certain, evaluating taste is always going to be subjective, but with this type of tasting in which the cigars are evaluated relatively to each other, the results are still quite reliable. With 60 percent of assessments being good and very good, the humidor-stored cigar is far ahead of both other candidates with, respectively, 19 percent. Sixty-two percent of entries cited the refrigerated cigar as having a less-good to bad taste, whereby almost 29 percent found the refrigerated cigar to have a bad taste. If we sum up the assessments of satisfactory, good, and very good, the humidor cigar, with 86 percent, clearly landed in first place. This was followed by the living-room cigar with 55 percent, and the stick from the refrigerator only received 38 percent.

RESULT FOR TASTE DEVELOPMENT DURING THE SMOKE 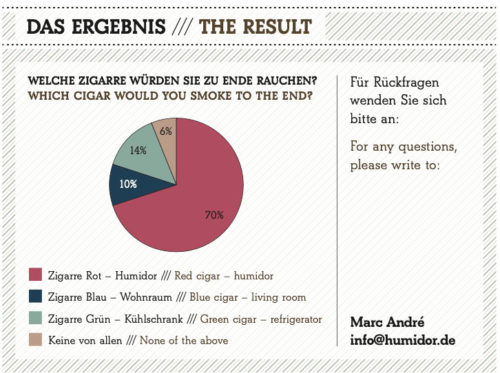 In this evaluation multiple answers were allowed. The most interesting were the assessments that showed a clearly discernible taste development and, at the same time, a positive or negative appraisal. Here, too, the cigar from the humidor proved that a positive and clearly perceptible change in taste during smoking is correlated with correct storage.

WHICH CIGAR WOULD YOU SMOKE TO THE END?
For the last question, participants were to say which cigar they would smoke to the end, or which one they considered the best. For me, the result was not surprising, per se, but in the very unequivocal result, it was surprising. Seventy percent of all test participants found the cigar stored in the humidor to be the best. In conclusion, it can be stated that the storage conditions at room temperature (even when this fluctuates between summer and winter) and approximately 70% relative humidity by far deliver the best results. Storage in the refrigerator irreversibly ruins a cigar and is definitely not an option. Strong fluctuations in humidity should likewise be absolutely avoided because they ruin the aging process. This is, by the way, a big problem with normal table humidors. Opening the lid when the ambient air is dry causes the strong sinking of the relative humidity. For the humidifying system to then again reach the target humidity level of around 70 percent can take several hours. During this time, the cigars lose their humidity to the environment because the humidifying system cannot compensate for the lost humidity quickly enough. If you are planning to store your cigars over a long period, don’t store your cigars individually, but always in the box. In addition, a humidifying system should be used, which compensates the lost humidity within the shortest time and enables the most constant storage requirements possible.

Ask An Ex: Inspiring Veteran Mike Miller Shares How He Quit Smoking after 50+ Years with the CBQ Method + Helpful Tips You Can Use

Does vaping cause cancer? – VAPES

Espinosa and Guy Fieri Team up for Knuckle Sandwich